I'd Like to Show You Inside My Digital Life. 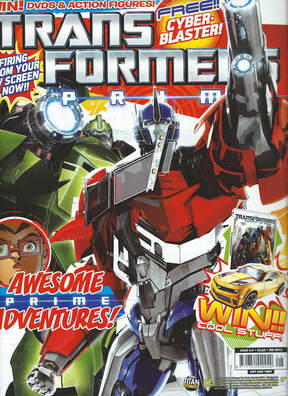 
Welcome to 2012! The year we celebrated 50 years of Bond, the last time anyone felt remotely good about being British thanks to the Olympics and the year Transformation began.

It’s also a good twenty years since the home console SEGA vs Nintendo revolution. A time where there aren’t just X-Boxes and Playstations, but smart phones full of games as well. As a hobby, being a gamer was as common as an Angry Bird.

And indeed, one of the main reasons the action figure industry was, and still is, in serious decline is kids much prefer to spend less money on a download of a game that will entertain them for longer. Digital competition is not the only reason there were less toys for Dark of the Moon than Revenge of the Fallen, but that world is a serious enough rival that it probably explains the comic we get this month. 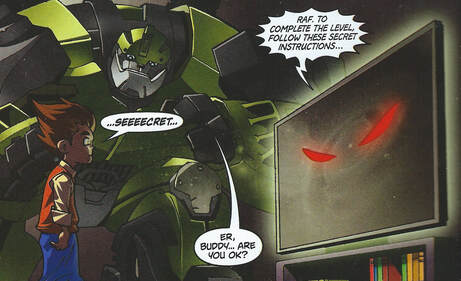 Max?
We open on Raf excitedly using Bumblebee to run him to the store to pick up the “Ultra Lux Special Invasionauts Special Edition. Complete with 4D glasses”. Which makes his life complete.

Unfortunately, it also makes Megatron’s day, as the entire thing is a set-up, after Soundwave found out from studying “Rafman’s” social media that this game was going to be the biggest thing in the boy’s week.

It also turns out to be pretty big for Bulkhead as, back at the base, he and Raf are having a great time playing the game together. Whilst Ratchet is scathing of the idea of them being really into a game where they have to kill invading alien robots.

Raf is loving it though, even pointing out that despite what his mum says (which is presumably the reason he’s playing here rather than at home) video games do not turn kids into mindless zombies... just as the game turns him into a mindless zombie. 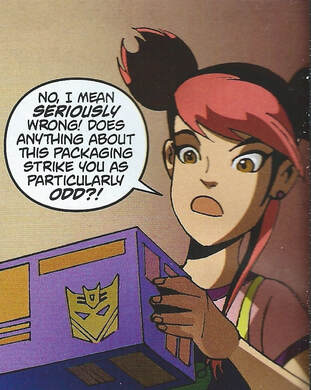 A subtle clue.
And if that doesn’t drop some hints about Etherington’s age, the fact that once the TV starts talking to Raf it looks like Max from old Scream comic The Thirteenth Floor certainly does.

It turns out, again showing perhaps that this has been put together by your dad that doesn’t understand computers since Pong went out of fashion, there’s no online element to Raf’s very carefully unnamed console, so rather than just having him tell Max where Omega Point is, he has to set the Ground Bridge to teleport a load of Vehicons there.

Which leads us, after rather a fun moment of Bulkhead getting the blame (“What have I told you about playing with machines more complicated than a blender?!”), gives us a nice action scene where Optimus, in true Bay style, offers a “Suitably violent distraction”.

Luckily for the Autobots, detective Miko is on the case, and spots the massive Decepticon logo on the packaging of Invasionauts. Which, considering that this is a real game where the ‘Cons have just high-jacked this one copy, means that they deliberately changed the box. Villains really do always make that one mistake. 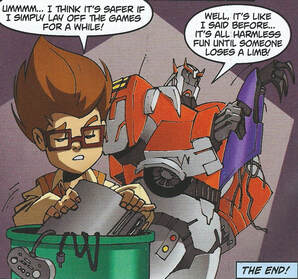 There's an expensive present binned.
In the least likely way to break brainwashing since Buster Witwicky and the Carwash of Doom!, Miko throwing the Carefully Unnamed Console on the floor cures Raf, letting him redeem himself by working out a way to send all the Vehicons back without letting them know the location of the base.

We then end on Raf putting his Carefully Unnamed Console in the bin. Which might as well be accompanied by a caption saying PLEASE BUY TRANSFORMERS INSTEAD OF COMPUTER GAMES OH DEAR GOD.

Which is especially amusing considering how much shilling the comic used to do for Nintendo.

There’s some fun stuff in here, and let’s take a moment to appreciate the Alec Guinness spoofing tile (complete with exclamation mark for the first time in ages!), but it feels just out of touch enough with what kids were actually into in 2012 with its Mary Whitehouse style fears about what games do to them as to feel like your nan wrote it. Some nice Dario Brizuela art is the main positive here. 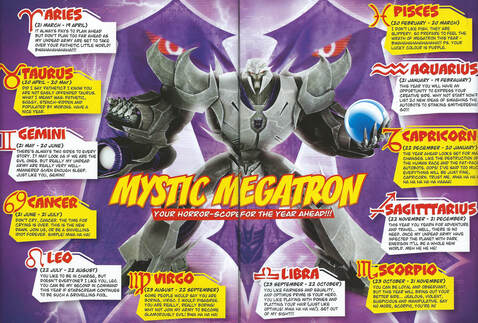 Doing the Tory Power Pose as well.
The editorial promises us a “Prime year ahead!”, and we do kick off 2012 in style with the return of the horoscope, this time ran by Mystic Megatron as a double page spread. Gazing deeply into Megatron’s ball reveals that for me, Scorpio, my stars say “You can be loyal and observant, but this year will bring out your better side... jealous, violent, suspicious and manipulative. Say no more, Scorpio, you’re in!”

Which sounds about right.

A new incentive for subscribers this month sees anyone who signs up get a Cyberverse toy worth £10. Which might be a sign of how desperate they are to get readers back on-board.

The poster is just one page this month, to make room for the boardgame to have an extra page of instructions and cut-out counters. Pleasingly it’s called Invasionauts, tying into the strip. Though it doesn’t feel very connected to the brief description of what the game is actually like.

Starscream’s Stumpers wants you to spot the difference between two photos of Bulkhead and Arcee; help Ratchet find his missing arm and work out which three Autobots are coming through the Ground Bridge. 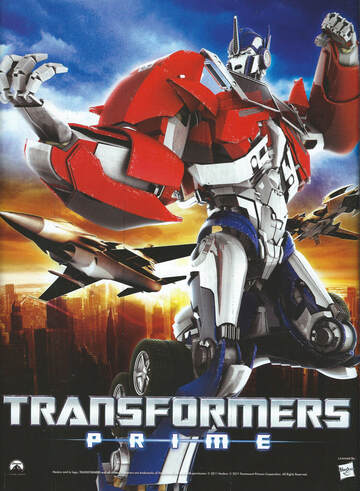 As it's an easier to scan single page, I can include the poster for once!
Raf’s code using competitions are for Dark of the Moon on DVD; Bumblebee Mechtech figures and AWESOME LIGHTSABERS.

Bulkhead’s Wordsearch reveals one of his favourite phrases is “Let’s smash it”, the kinky sod.

Mega-Mouth has Arcee try and start a new year’s truce, but Megatron wants to bury her rather than the hatchet.

Rory Mason, 11 from Huddersfield, sends in a pretty amazing drawing of his OC Slaughter that impresses Megatron so much he once again forgets that he wasn’t in Dark of the Moon when explaining that Megatron’s hoody look to Matthew Hazel, 13 from Weymouth.

Most excitingly though, Brandon Brearley (9, Seaham) sends in a drawing of Optimus Prime disco dancing.

Next week, we’ll be dancing out of school. 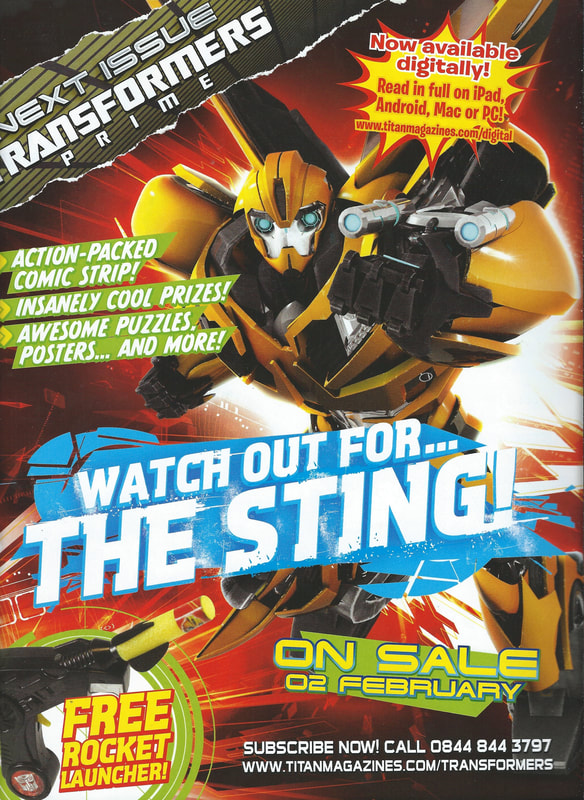