Freak Out in a Moonage Daydream. 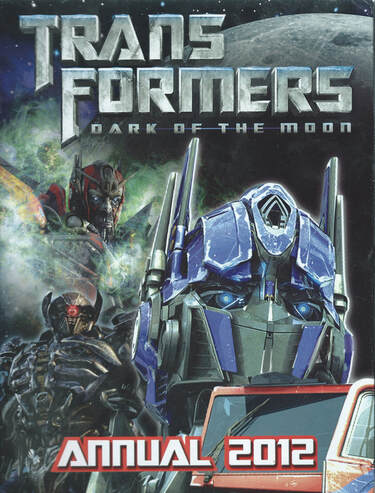 Transformers: Dark of the Moon Annual 2012.


The Flight of the Ark.
The Dark Side of the Moon.
Double-Crossed!
Abandoned!
Shock and Awe!


Any minute now, you’ll be nothing but Sentinel’s slave!


Welcome to the book that killed the Transformers Annual. After five straight Christmases with one (and a total of seven in the century to date), it will now be three years till the next and final (again, to date) hardback in the series.

Why is a bit of a puzzler, kids don’t buy these but parents and grannies. And you would have thought the success of the film would have made it an obvious pick. But it clearly didn’t sell well enough to make a Prime book the following year viable. 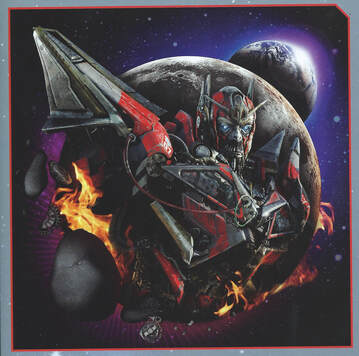 He's not the messiah, he's a naughty boy.
The bulk of the content being a broken up novelisation of the film all the kids reading would have had on DVD anyway is one possible explanation. Which is a shame as this (which I believe is unique to this book rather than a reprint) is a rather fun and stylish simplification of it, with each chapter taking a different viewpoint. Making it reminiscent of how The Headmasters Saga was handled in the 1987 book.

So, Flight of the Ark tells of the loss of the ship and Sentinel Prime from the perspective of the watching Optimus. Dark Side of the Moon the Apollo 11 mission. Double Crossed! (after condensing all the Chernobyl stuff to a paragraph) the betrayal of Sentinel and the death of Ironhide. Abandoned! the exile of the Autobots (simplified to being just because they were wrong about Sentinel) and Shock and Awe! the final battle.

The last of these is the most interesting. Partly for taking the very odd decision, in an adaptation that has to cut out so much, for devoting a disproportionate amount of time to the Optimus/Shockwave fight.

There is also much mirth to be had from Carly, only appearing for two paragraphs, changing her “Sentinel’s bitch” line to “Servant”. 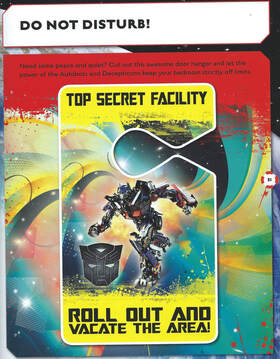 When the room's a rocking...
The key difference though is that we not only have the ending where Megatron lives and gets his truce, but Sentinel survives as well. Suggesting the former wasn’t a case of only having the early script to work from, but there being a mandate to tone down the violence.

I don’t recall now if there’s any text content in the final Annual, but if not, this is a pretty solid, if unspectacular end for the original fiction in the books.

Of course, the real focus of the Annuals by now is the games. There are numerous wordsearches, spot the differences and colouring pages (the little shit who owned this before me has even had a go at some of them). Trickiest of the lot is More Than Meets the Eye, a visual puzzle page asking you to guess which is the longest of two lines and which circle is biggest and I can never have any truck with any of that stuff.

Non-puzzle stuff includes a cut out “Do not disturb” door hanger, for those of you that love vandalising books. There’s also a Decepticon Deployment world map showing key locations that very nearly but not quite gets Chernobyl in totally the wrong place. 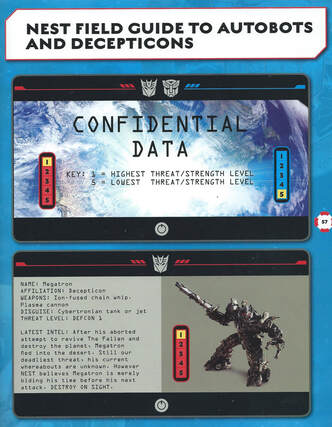 He's mean and moody.
The book ends on Nest Field Guide to Autobots and Decepticons, covering the respective “Threat” and “Strength” levels of various allies and enemies, such as Megatron, Prime, Sentinel... and the Twins.

I seem to keep saying this, but surely that has to be the last anyone ever saw of those two?

This is actually a pretty dense package, I think it would have kept the kids who did get it on Christmas day pretty entertained.

Next week, we hit the year Transformation started! 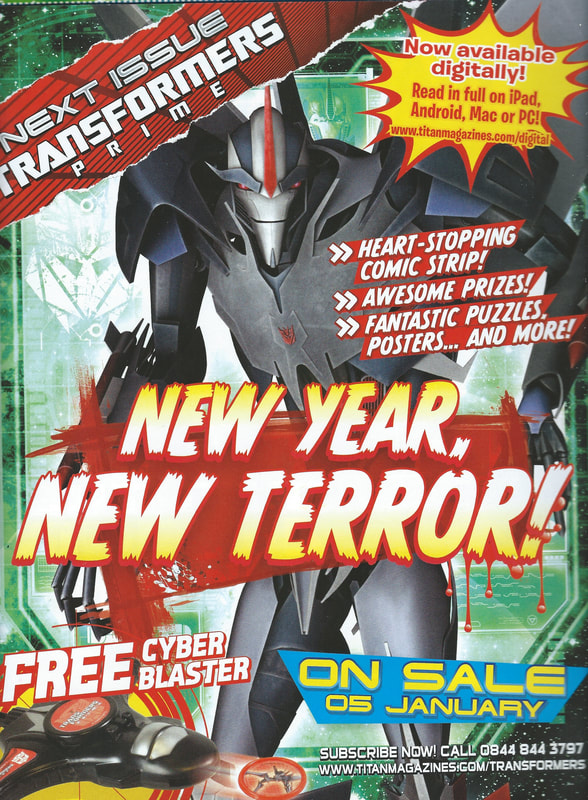