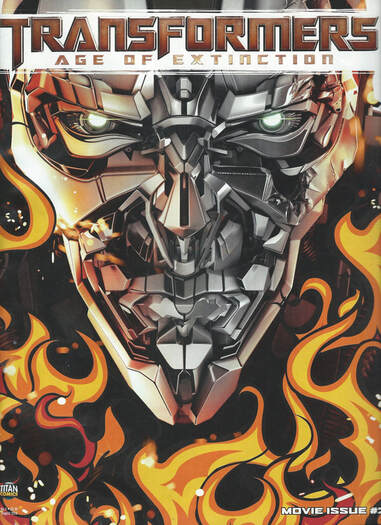 
Tsk. What a waste of good ammunition.


If a week is a long time in politics, then a month is clearly an even longer time in comics, as after a very rushed feeling product last issue, for the second Age of Extinction strip everything comes across as having that bit more time to make it a more polished product.

Which is nice as this is Robin Etherington’s last strip. It’s possible that he (and indeed Cooper) would have returned had the comic continued past 5. But with him having done less and less stories recently, it’s hard not to feel Etherington had moved on, and helping to relaunch the book was as much a favour to the editor as anything else.

The strip itself is still a prequel to the film. Which is unfortunate as it would take almost no rewriting to make it a successor to the now out in cinemas blockbuster. Remove Prime (perhaps have Hound leading the group of Autobots in battle conditions instead) and the Surprise Last Panel Cameo. Have them hunting down KSI robots that still need to be sorted out and you could otherwise do exactly the same story.

Though I do have the advantage of having seen the film. There are hints all through the issue that Titan had basically been given no info bar some out of date character profiles and a very short synopsis. Even by the standards of the previous films, there’s a sense that Paramount are not especially interested in the spin-offs at this point (there was also no novelisation or IDW comics this time around). 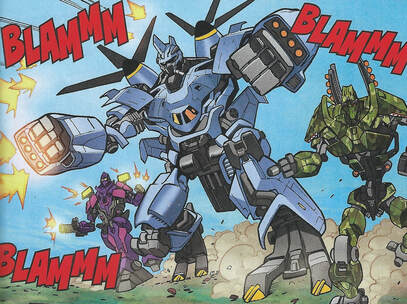 Bois.
Whatever the reason for keeping the prequels only vaguely related to the films, the comic opens in the slums outside Jakarta, where a team of Autobots (where Bumblebee joins Prime in being in the body he doesn’t get till during the film this is set after. It’s likely Titan didn’t know they wouldn’t look so throughout. Certainly the don’t seem to have been aware they could have promoted the Evasion Prime toy and still been potentially in canon as he must have had that body before being attacked by Cemetery Wind) are fighting a rough battle against Decepticons.

That is to say... new Decpeticons! As a parting gift, Etherington has given us some brand new characters. Though he’s probably motivated by the fact there were no viable on-screen Decepticons he could use when this was set and the tie-in toyline was so anaemic that there were no longer any fun guys like Stockade to throw in.

Sadly, none of the three get names, but Andres Ponce does great work with their designs, and Purple Guy, Green Guy and Big Bastard Helicopter Guy (the leader) all look fantastic. And put up enough of a fight that they’re winning... till they inexplicably retreat.

Which is where we do get one little bit of foreshadowing for the film, as the local humans are still scared of the Autobots following what happened in Chicago. Though with what we learn a few pages later, they actually have a better reason to be terrified. 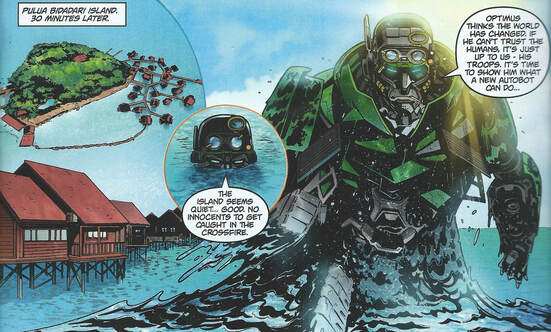 Probably the peak of Bayverse comic art.
Crosshairs, and this surprises Prime in a way that suggests that he doesn’t expect smarts from this Autobot, has managed to plant a tracker on Big Bastard Helicopter Guy, placing him on the island of Pulau Bidadari (though he calls it Pulua). And despite Prime’s thinking they should go in carefully, Crosshairs wants to go in alone as an unexpected sneak attack.

Because he’s a ranger.

Which is mentioned just enough times in the issue for you to realise this is pretty much the only thing Etherington knew about him (if the cowboy thing I’ll talk about further down was in the information he had, he thankfully underplays it so as not to contradict his on-screen portrayal).

Prime seemingly reluctantly agrees, but it is in fact a test as he sends Bumblebee along to watch discreetly and assess the new Autobot.

Unexpectedly, the absolute highlight of the issue is an incredibly moody and beautiful wide panel of Crosshairs emerging form the water around the island, complete with cigarette dropping from his mouth. It’s a moment Ponce excels at and shows just how far the artists have come in seven years at capturing the film designs in two dimensions.

On the island, Big Bastard Helicopter Guy is incredibly smug their plan to trick the Autobots into a frontal attack will work. 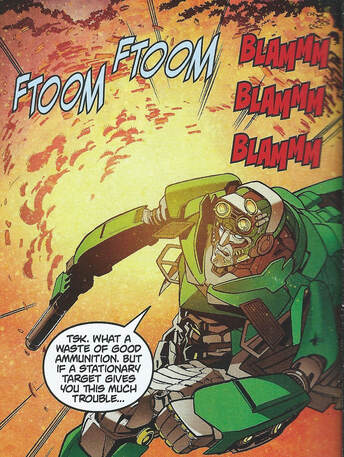 They probably changed him from being a cowboy because they occasionally shut up.
A trick he says involved killing hundreds of “Non-essential” humans. Which explains why the survivors were so skittish of the Autobots. And makes these three unnamed characters the most successful murderers in the Titan comics.

This is following some advice Lockdown gave him. As Lockdown isn’t a Decepticon, I wonder if he means the Revenge of the Fallen guy who we saw in the later issues of that comic?

It turns out to have been quite bad advice though as they were not expecting a sneak attack from one Autobot. Which gives us a tremendously fun fighting scene as Crosshairs bounces all over the place, successfully taking out Green Guy and Purple Guy by using the later as a human shield.

Which just leaves Big Bastard Helicopter Guy, who is still incredibly smug despite what just happened. Even pointing out that he knew about the tracker Crosshairs placed on him all along.

RIP BBHG, we barely knew you.

This means Crosshairs gets a good report from Bumblebee, but Prime is still worried that something more is going on here. And even as Crosshairs insists this is not the case, we cut to the lurking and watching... Lockdown!

Pictured: Robin Etherington sneaking off.
Which is ridiculous. At least his appearance last issue was set a few more years in the past so you can massage the discontinuity a bit more. I’m not sure if there’s an intentional effort to preserve who the real Decepticon leader in the film is going to turn out to be (though if you reworked this to be dealing with KSI drones after the film, Galvatron watching from the shadows would make more sense), or if the information Titan had really was that sparse is hard to say. But it’s a bit silly to read in a comic after the film came out.

But regardless of an odd attempt to foreshadow events in a film already in cinemas inaccurately, this is a tremendously fun strip. Largely thanks to Ponce’s genuinely stunning art, but there’s still fun dialogue and Etherington gets to wave goodbye to the franchise on a high.

He wrote for the book for more than four years, being the lead writer for three of them, with 22 issues under his belt. Which, on an American comic, would be a pretty solid run. But, because he came in after the older fandom interest had drifted (I think, realistically, his Revenge of the Fallen issues are the only ones that might ever get reprinted), he tends to be forgotten as a major contributor to the comics.

Despite being only second to Furman himself in the amount of British Transformers material he’s written. Considering he has, with his brother, gone on to a pretty strong writing career post Titan, I think he’s also one of the few to have successfully used the series the way most young writers regard a licensed property: A stepping stone in their career on the way to bigger things. And all power to him. 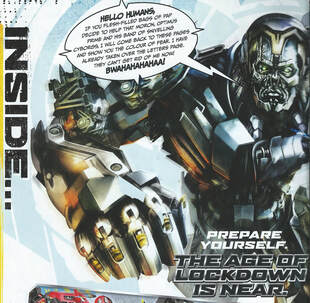 Not a Decepticon.
The issue surrounding the comic is just as determined to convince you Lockdown is a Decepticon, starting with him introducing the issue by telling the “Flesh-filled bags of pap” reading they will be in trouble if they decide to support the Autobots.

The Bee Sting: Stinger Vs Bumblebee compares the two rivals, giving Stinger a backstory as an infiltrator and spy that suggests he must have fit a lot into the half hour between becoming sentient and being killed.

The Lowdown on Crosshairs tries to sum up the character with no information. So he’s a ranger, a cowboy (as suggested by his “Howdy” last issue, suggesting the cockney portrayal was a late in the day decision) and the rest is based on the G1/07 Movie repaint toy Crosshairs toy profiles of a calm and fair-minded guy.

The first competition this month is for those little 30th anniversary figurines and an Autobot logo light. But I’m struggling to think what the right answer is to “Who is Optimus Prime’s second in command” with the options of Bumblebee, Bulkhead and Ratchet. 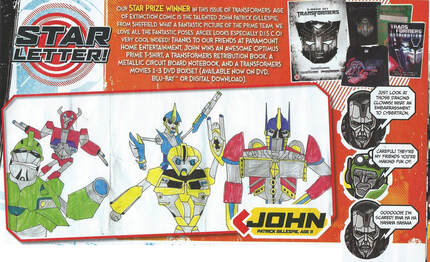 Bulkhead just wants to die.
Battle for the Beasts is a boardgame with an unusually elaborate backstory about Optimus chasing Lockdown to stop him finding the CNA needed to create a new Grimlock.

Crosshair’s Conundrums asks you to decode a message from Galvatron (“Attack the human dwellings, draw out the Autobots); name the Dinobots from an extreme close-up of their faces; identify the Autobots in the words “WHAMM, BAMM!” and work out which lead Optimus Prime is holding is actually tying up Grimlock.

The second competition is, once again, for the Orion Pax DVD, but this time the limited edition with a download and toy included.

LockDown’s Letterbox continues the idea that he’s a Decepticon, as he is furious at the amount of drawings of Autobots. Even an excellent drawing of the Transformers Prime cast by John Patrick Gillespie (11) outrages him. Though it turns out Crosshairs has crossed dimensions to be friends with that’s show’s crew. 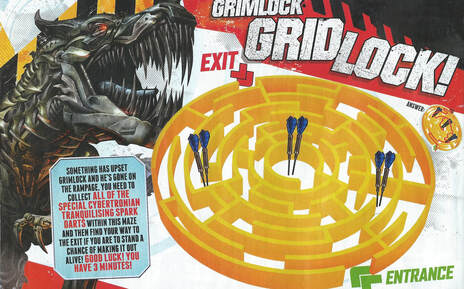 No wonder Grimlock is so pissed all the time.
Grimlock’s Gridlock! has you running about a maze to get “Tranquillising spark darts” to put Grimlock to sleep with. He doesn’t have much luck does he? And the final competition is for some more TOPPS cards.

One shame of Etherington having left the book is that the series, and therefore the entire run of British Transformers comics is going to end on a new author rather than a familiar face.

But that’s something to discuss next week as we meet both Martin Fisher and Galvatron.

Try and guess which one is the new writer. 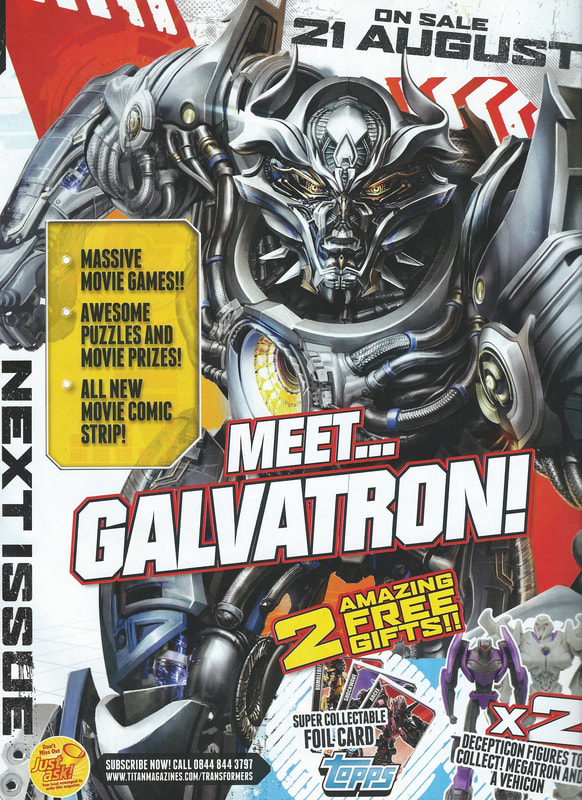