I'm the Man in Black. 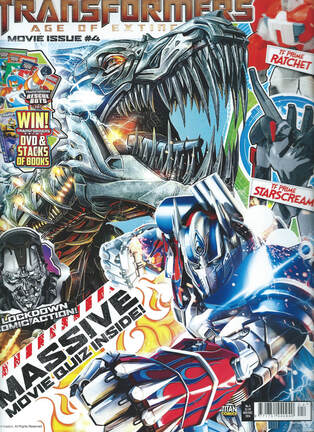 
I never leave home without it.


Martin Fisher really does like an exclamation mark doesn’t he?

I certainly let out a few ! of relief when I got this issue out of my secure storage vault (under the bed) and I realised it was the last one with an oversized and impossible to fit in my scanner cover.

Nearly two months since issue 3 has had one distinct advantage, the people making the comic have finally seen the movie. Or at least been told something more about it than a list of names, as the strip opens with Lockdown flying through space with a ship full of captured bounty scalps waiting to be returned home.

That’s a marked, and far more accurate, change from issue 2 where he’s on Earth, leading the Decepticons and hiding behind rocks. Just in time for things to end, we’re getting an accurate portrayal of the character. 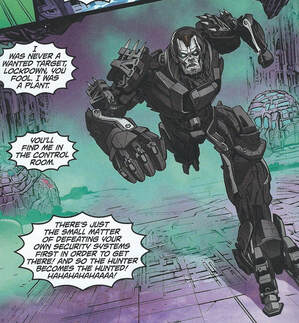 Running from 2020.
Which includes him being very pleased with himself, as he walks round the holding area smugly telling all his captives (and us) how they should be grateful he’s taking them in for the bounties because things could have been a lot worse.

Which may be overconfidence, as one prisoner, Sojex, turns out to be missing from her cell. Which he barely has chance to register before the ship veers off course and another prisoner grabs him through their bars.

Which he’s able to easily solve with an electric shock, but Sojex having control of his ship and turning its security measures against him is more of an issue. Effectively making it a House That Jack Built style killer building story.

Something he is well up for as he tells his crew (who are actually in the film, but I’d completely forgotten them despite only rewatching it recently) not to interfere as it’s time for him to have some fun. 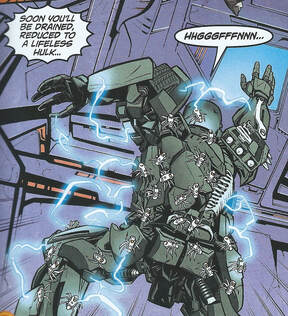 He should have worn his facemask.
Only pausing to firmly spell out that Sojex is a criminal so we don’t have to feel too bad for her being turned over to the authorities by Lockdown (she’s set all this up for revenge on him over having previously captured the leader of the Coseem Crime Gang), he jumps his way through various Indiana Jones style booby traps with ease. Because “No one beats Lockdown”.

But every Lockdown has its Dominic Cummings, and here that turns out to be Sojex’s secret weapon... Scraplets!

It’s tremendously fun to see these guys given the Bay treatment, even if they’re actually less disturbingly violent than the Marvel version, just draining his energy rather than cannibalising him.

Pleasingly, the comic normally splits up the strip into two four part chunks, but here they have the first half be five pages to create an effective mini-cliffhanger. 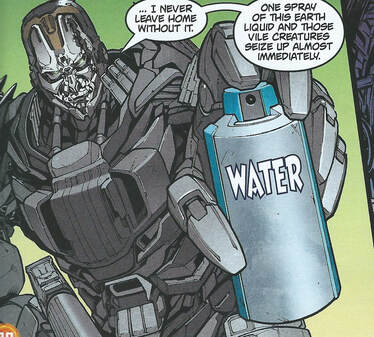 That's it. End the comic. We've peaked.
Which leaves Sojex (who turns out to be a rather Star Wars looking alien woman) incredibly smug, until Lockdown bursts onto the bridge, perfectly fine. Because he never leaves home without the cure for scraplets, the obscure Earth liquid... Water!

Which he carries in a giant deodorant can marked “WATER”.

This is brilliant and hilarious. And, as we approach the final issue, a lovely little nod to Bob Budiansky.

And as Fisher is clearly a fan of the original comic, this is the point you realise he’s sneakily written an issue of Death’s Head with the serial number filed off.

With Sojex captured and then dumped on the Crime Gang (what is this, the Famous Five?) to let them deal with her failure, he then gets a call from... someone offering a job on Earth.

Handy for replacing his water. 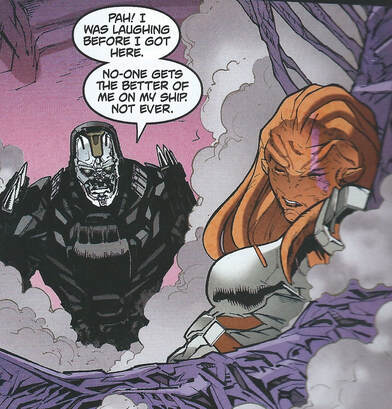 Irony.
This was another fun one, with Lockdown being an entertaining bastard with some great lines. It’s also nice to have a decent, and named this time, female character. Plus, Scraplets. What more do you want? Just a shame the ending should really have definitely made it the last prequel.

This is the last issue for Andres Ponce on art, who has really excelled on this volume and bows out with some stuff that, though feeling a bit more rushed that the previous couple of strips, is still incredibly strong.

The signs that the comic is now made by people who have seen the film begin as soon as you open the issue, with Crosshairs now speaking like a Cockney rather than a cowboy as he introduces things (“‘Ello ‘umans”) as he reassures you he actually likes Earth.

The Lowdown On...Hound reaches deep into the Wiki to fill out his character profile, going all the way back to the 2007 PSP game that used the name, meaning it talks about his special relationship with Trailbreaker.

Yet another sign they’ve seen the film now, there’s a Massive Movie Quiz about Age of Extinction. The questions even have all correct answers. 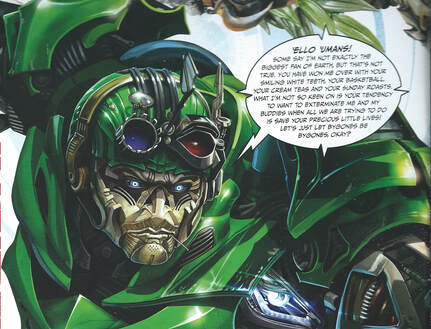 'Ello.
Grimlock Vs Scorn: The Ultimate Smackdown! pits the two Dinobots against each other, with Grimlock said to “Almost defy description”. Which feels like something the artists who’ve had to draw the Bay designs will feel in their souls.

Crosshairs’ Conundrums asks you to decipher a message on ancient rocks (“Long live the Dinobots!”); help Hound through a computer system security maze; spot the differences between the real Grimlock and a KSI clone and recognise the Autobots in a “THWACK BOOM” sound effect.

The poster this issue is design to look like a release one for the film, with profiles shots of the Autobots between the logo and tag-line.

A sign that Titan were not expecting the comic to end next issue is that you can still subscribe. Getting free gifts of a TOPPS card case.

No wonder the book is doomed. 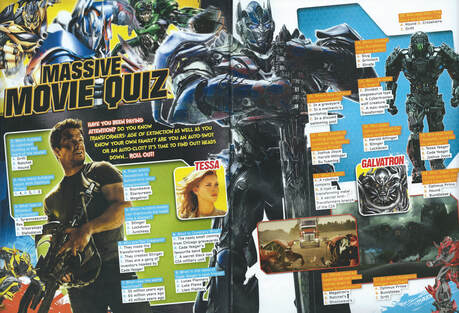 As close as Cade gets to the comic. Thankfully.
Are You... Battle Ready? gives you multiple choices to find out what sort of Autobot you are, out of Crosshairs; Drift; Hound and “Bee”.

Sprint for Cybertron is a boardgame where you have to race to the Transformers home-world to fight off an alien invasion. If you get there first, you will have Optimus Prime’s respect.

As far as I can tell, this time all the art in Lockdown’s Letters appears to be new. So I don’t know what happened last issue. Chunky bois seems to be the theme, with a jolly Grimlock from Nicholas von Roon (5, London) and a giant blue sphere Bulkhead by Jahden Samuel (6, Dagenham).

There’s also some young Generation One fans, with an Optimus Prime from Cieran Jones (11, Pembroke) and Soundwave saying his “Superior/inferior” line form the 86 film by Dylan Nuneaton (10, Warwickshire. Though as the town of Nuneaton is in Warwickshire, I suspect a mistake there). Which deeply impresses Crosshairs, but Lockdown just wants drawings of himself sent in.

Not many chances left for that now mate.

A competition for more Transformers Prime DVDs and Drift’s Wordsearch round off the main contents, but it’s the reason for the bigger cover that stands out. As one era draws to a close, another begins as we’re introduced to the Rescue Bots. 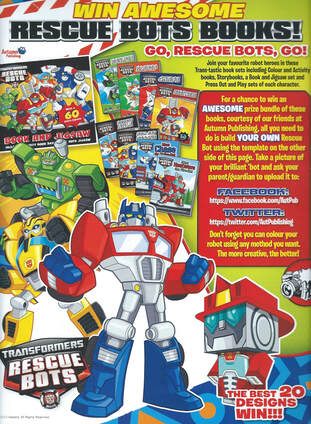 Brave new world.
This pre-school version of the franchise will fall outside the remit of this project (beyond summing up the Signature issues) but here you can win the first wave of books and a jigsaw, by colouring in and gluing together the cut-out Rescue Bot on the back cover to create an all new character.

This is also, surprisingly late in the day, the first competition with no option to mail in to enter. You have to take a photo and, rather than bunging it in an envelope or even emailing it, you have to post it to either the Facebook or Twitter of Autumn publishing.

I had a look at the Twitter, and there hasn’t been a post since November 2015, with the linked website now defunct as well. It seems Transformers is not always a licence to print money.

The feed, annoyingly, kept refreshing as I looked back through it, but I could only find one entry sent in via that platform. And the three tweets (“What a great competition!” “Here’s my daughter’s entry!” “Can’t believe we won!”) had the sort of enthusiasm that feels “Works for the company”.

Of course, they may have only kept going another year, but that’s more than this comic has.

Yes, next week it really is the end. After 30 years and 424 main issues (plus a whole raft of specials), not to mention the last 8 years of my own life writing all this nonsense, we ever hit the final ever British issue of original content.

Plus the last Annual and the worrying number of issues of a non-original content comic (indeed, two comics) you’ve never heard of.

So, expect a packed finale for Transformation.