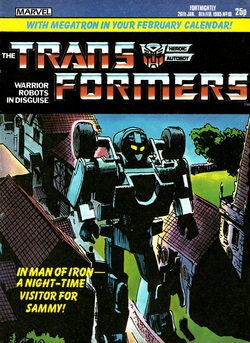 
Lets talk about John Ridgway's art for a second. It feels very different to what we'd consider "normal" Transformers comic art. In part of course because it's still extremely toy based at a point where the American book has already moved onto the more familiar character models but that's not the whole reason. After all, the UK stories will be keeping to the toy look for the first 50 or so issues (and Will Simpson for longer). The scratchy, detailed and line heavy look here is completely different from the more clear and crisp look that most of the subsequent artists will adopt. To a certain extent it feels more... well... British. In the future the influence of American comics (in general, not just Marvel or Transformers) is going to be very evident. Ridgway on the other hand is old school, this is a comic that would be at home in early 2000 AD or even something more antiquated like Valiant. It's really wonderful stuff that stands apart from everything else we're going to see.

The story itself fits the art like a glove as it continues to be equally strange and different. Again, the Transformer involvement is minimal. We get a Decepticon jet in a dream, Mirage stomping about the countryside in an attempt to sneakily steal Sammy's drawing of The Man of Iron and Jazz continuing to be the single most sinister comics character of all time.

The first half of the issue is given over to Sam's nightmare, interspersed with Mirage's real visit. There are logic holes you can pick in it- How does Sammy know what the Decepticon emblem looks like? With Mirage leaving giant footprints behind him how hard is it for the authorities to follow him?- but it doesn't matter because it's fantastically realised and the unnerving dreamlike quality means it doesn't need to make perfect sense.

Editorial warning.
Roy Harker continues to be one of the most sensible adult humans we'll ever see in the comic. There's no "Ah need a vacation!" style comedy when he sees Mirage, but equally he doesn't panic. He barely even breaks a sweat when  the army captain tells him that in the course of looking for the unexploded Decepticon bomb they've found something the size of an ocean-going liner.

The back end of the story is taken up with something that was obviously controversial in the office. The end note of "Remember: Never Accept Lifts From Strangers!" is well remembered, but what I didn't realise until reading the entire issue that the editorial also goes on at length on this theme. Crane even unleashes the CAPS LOCK to emphasise the message and warns kids they should never get in a stranger's car even if they're promised adventure like Sammy is. Considering Crane wasn't directly involved in the commissioning and development of the story I wouldn't be surprised if this was one element Parkhouse and McKenzie had to push hard for against her better judgement. 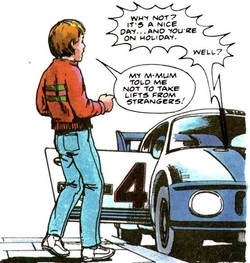 Just in case you didn't get the message.
A lot of wags have, over the years, suggested this is something of a mixed message as Sammy getting into the car does indeed lead to him getting into an exciting adventure with outer space robot people. We'll see how true that is over the next two weeks (but if I remember correctly he hardly reveals in it and is more scared shitless) but here it is very much played straight. Jazz is played once again as a sinister presence, out to kidnap a small boy with no hint of benign intent. His dialogue is played like every "Stranger Danger" video you ever saw at school.

For anyone who has come on-board with this new story there's actually been no indication so far that the Autotobts are even the good guys. It actually feels more like a second "Pilot", and, unlike issue 1, follows more along the "Showing it from the humans POV" approach I talked about back in issue 3. The set up here- of a kid having ancient proof of a lost Transformer's location in a family artifact and the Autotobots coming to him for it- is actually very like that of the first Bay film (where, in an odd little coincidence, Sam is the name of the kid).

From part 3 though, things are going to become a little more standard as the Autotobots arrive in force and start getting more lines, so this effectively ends a little mini-era of strange, unusual and very sinister Transformers.

As well as the second Hello From Hasbro (the Insecticons are coming soon!) the Openers segment also gives us something we haven't had before, a paragraph recapping the story so far. I'm not entirely sure why when previous instalments haven't been seen to need it (the even numbered issues have had the very brief recap on the top of the first page but the first half of any US issue has hand nothing even though the first 8 all flow together) but it makes a nice touch for new readers. It'll be interesting to see how long this lasts as most future UK issues just work the "As you know, your father, the King" exposition into the start of each part. 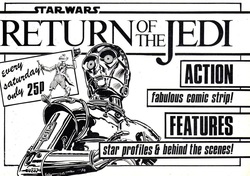 Advert for the Star Wars weekly.
As well as a Robot Round-up we get a two page feature on Robbie the Robot. Even though I'm fairly sure the former has already covered him in a previous issue. This is clearly a bit of cheap and easy padding (well, even more so than the normal non-Transformers stuff), probably rewritten for the younger audience from an old Starburst article. Machine Man opens with a promise that The Fantastic Four will be appearing, but- because it's a cut up American comic- they don't actually show up here. Ensuring a deep sense of disappointment set in as my hopes of a hero who isn't a dick would feature were dashed. Hilariously though the Next Issue box focuses on The Human Torch and The Thing being in Machine Man at the expense of the lead strip.

As I started by talking about the art, lets finish by mentioning the current cover style. Starting last issue the cover art has been from the main comic rather than specially commissioned. It doesn't really work, taking something intended to be seen in a much smaller panel and blowing it up just makes it look underdeveloped. Thankfully it's an approach that won't last long, but even with the odd original we won't really get a decent cover between now and the resumption of the American story.

Next Week: Some Transformers other than evil Jazz speak. 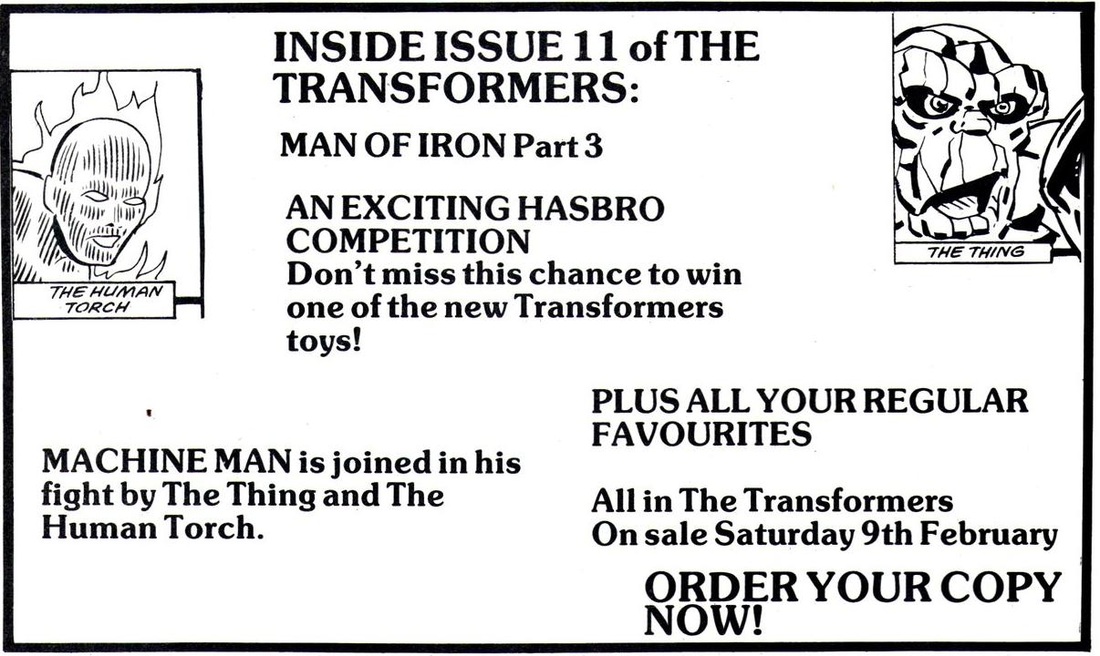