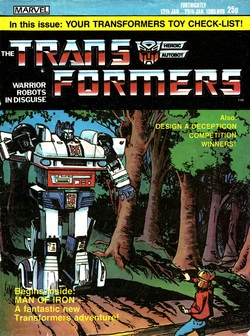 
What sort of bozo would want to bomb the castle? The Saxon liberation front? The mind boggles...


Before we begin, an update on last week. After claiming that Mirage had his last line in an American story there the indomitable Aunty Slag got in touch to remind me he actually got a one off line many, many issues from now in awe of Blaster (not counting his last words of “ARRRRRRRRGGGGGGHHHHHH” before his death in Generation 2. The same last words as the Seventh Doctor no less). Luckily it's far enough in the future for you all to have forgotten my brain fart on that score by the time we get there.

So here we are, the beginning of the UK originated stories. And a very strange feeling one in relation to what will come afterwards. No Furman on writing duties, set entirely in the UK (and the sort of upper middle class England of village greens that you only tend to find in episodes of Murder She Wrote) and the Marvel story with the most alien and remote portrayal of the Transformers in all of Marvel. Arguably ever.

As the first British strip this is the first time I'll be referencing what is very likely to become a bible to this blog, James Roberts' excellent “Making of” material in the current run of IDW reprints. He's done some fantastic, detailed work on this that has only reaffirmed my great big man love for him. And there's two particular things about this story from that first book that are worth noting.

The first is Marvel UK had put in motion their own, originated stories before they knew if the the American comic was going to continue past the original mini-series. They were committed to carrying on no matter what. And that likely explains why, except for the mention in the editorial last issue, there's absolutely no attempt whatsoever to try and explain where this happens in relation to the previous stories. Because they hadn't been finished at the time work was began on this. It, and the next story to follow it, is entirely stand-alone. Later Annuals and recaps will shove it into the mini-series; which as we've discussed isn't as hard as it might seem if you squint; but to all intents and purposes Man of Iron is its own beast.

The second is one of tone. As said, this doesn't really feel like anything else in Transformers. For years fans have just assumed this is because it's such an early story. The actual reason is more pragmatic. Though Shelia Crane is the title's editor, the person with responsibility for overseeing the commissioning and editing of the British created strips was Alan McKenzie. And, upon giving given reference material for the franchise from Hasbro on the characters and the set up he decided the whole thing was pretty much crap and to do a comic that bore as little resemblance to Transformers as he could possibly get away with. 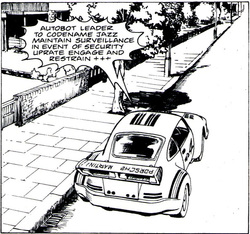 Codename: Jazz.
This is where Steve Parkhouse and John Ridgeway come in. They'd worked with McKenzie on Doctor Who Magazine. Parkhouse had written all of the 5th Doctor's comic stories, and Ridgeway was in the middle of what would become him drawing all of the 6th Doctor's. This period is roughly where they meet in the middle and were collaborating on the early Colin Baker stories to great success at a time the TV version was going severely off course.

But it's those early Peter Davison stories, set in the small English village of Stockbridge; where the Doctor has set up shop in order to play cricket but is constantly interrupted by strange alien events; that provide the basis for Man of Iron. Especially the story The Stockbridge Horror; in which an alien spaceship (in that case, the Tardis) that's been buried for millennia is dug up much to the confusion of the called in army. It's fair to say that the village featured here, Stansham, is likely just down the road from Stockbridge and it was only something like a rampaging horde of Voord that kept the Doctor from popping over.

On a more personal note, Ridgeway also brought some of his previous work into his art, as Sammy is based on his son (who also pops up in one of his 2000 AD stories).

The disdain for the titular characters is fairly obvious, the three Decepticon jets make a brief appearance in order to kick off the plot by bombing Stansham castle, but after them there's only one other Cybertronian present in Jazz.

The bulk of the story is given over to the son of the castle's curator, Sammy Harker. His story here is basically a standard British boys adventure/fantasy story, only except for Stig of the Dump it's a giant alien robot he finds in the woods.

Jazz isn't a character here, he's a giant sinister monster looming over the little (younger than Buster) boy playing Indians. Whilst Jazz seeming scary from the boys POV is understandable, this carries on when we're alone with the audience as he follows Sammy home. The only dialogue for a Transformer is an extremely cold computerised report he sends after he finds the Harker house that makes him seem the creepy stalker from hell. Even the Jazz who was cheerfully giving Sparkplug a heart attack with his flame thrower seemed more friendly than this.

What's also curious is why Jazz is watching Sammy, if the Autobots have worked out the curator may have information what's buried under the castle they're using the boy to get to him, even if it won't quite work out that way. That's very underhand and sneaky, and is all part of the general feeling that these are genuinely alien aliens. Exactly the sort of thing Mike Costa claimed was impossible to do with the franchise. Coming just three issues after we had Gears and Spider-Man doing their best Morecambe and Wise it seems more out of place than any of the continuity issues; but as a children's story in its own right there's something fascinating and sinister about these scenes.

The highlight of the issue for me though is Sammy's subsequent talk with his father, Roy. It subverts expectations by having the grown up being prepared to listen to the kids crazy story and, rather than being dismissive, shares an old story about the mythical “Man of Iron” who appears at irregular intervals to seemingly defend the castle. After some nicely drawn “Giant robot Vs. Knights” action we get a cliffhanger that works on two levels as Roy produces an old picture of the Man, and once Sammy agrees it looks like what he saw, reveals it's over 900 years old.

From the perspective of a stand-alone kids adventure this works as a major reveal because it means Sam is caught up in a bigger and older problem than he imagined. From the perspective of a Transformers story it means we learn there's more of them running about on Earth than we knew about and they've been active for a long time. It might seem low key, but it actually manages to juggle what the story is trying to be and what the logo on the front says it should be very successfully. 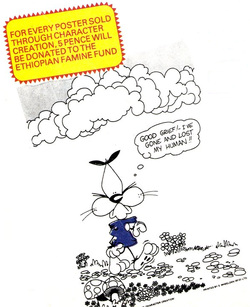 If you didn't buy this, you hate Ethiopia.
Over on the Openers page, we have the first letter asking about a Transformers club. Despite everything else in the '80's having one (including bloody Action Force) and a half hearted attempt at S.T.A.R.S. this would, surprisingly, never happen.

The big shock though is finding out Matt and the Cat isn't something created for Transformers but imported over from the Bradford Telegraph and Argus. I'd love to know if they're still running in it all these years later. You get the chance to send off for a poster from that venerable publication. Go on, how may of you got one? Really, that few?

Instead of the usual poster we get the results of the “Design a Decepticon” competition. Somewhat hilariously one entry, the imaginatively named “Decepticon”, is just a copy of a drawing of a Robotech Valkyrie toy. The same one Hasbro would later licence to release as the Autobot Jetfire. Ironically because of copyright reasons he'd never look as much like the toy when he shows up in the comic as the drawing does here. Come to that, fellow entry Mimmick (that's how he spells it) has a suspiciously Jetfire-ey backpack as well.

Over in Robot Round-Up Johnny Black manages to put his trip to Disney World on expenses and Machine Man manages to defeat his doppelgänger. Though frankly I'm on the side of the evil senator who wants to discredit him.

Next week we get into double digits as Mirage (who'll still pop up every now and then in the UK) gets to take his turn at scaring the crap out of a small boy. These are our heroes. 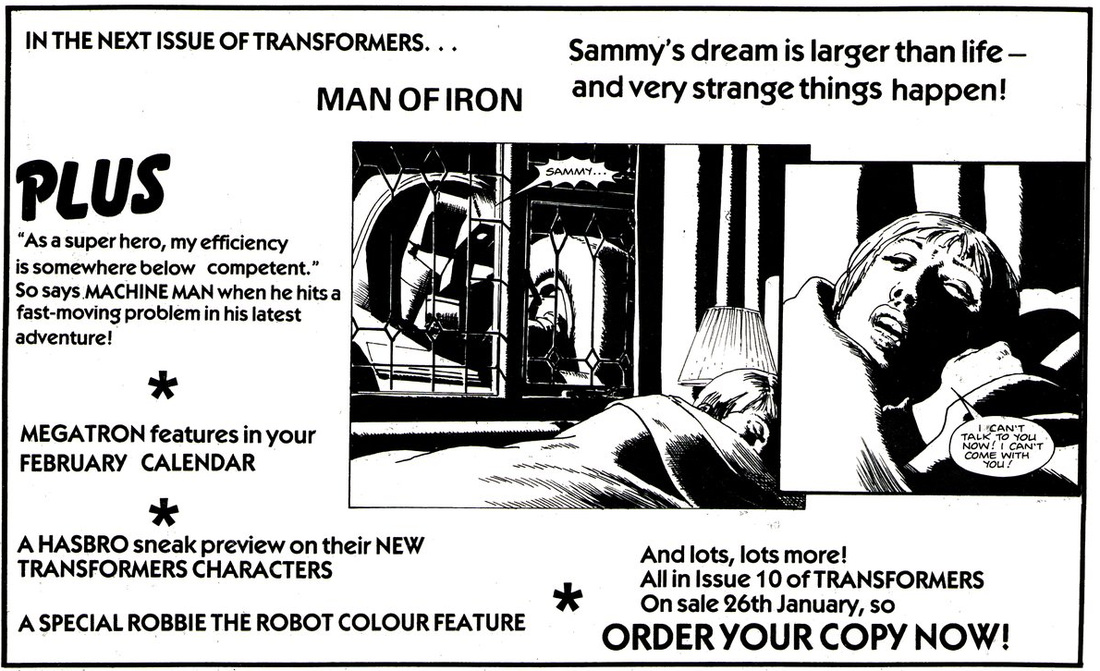