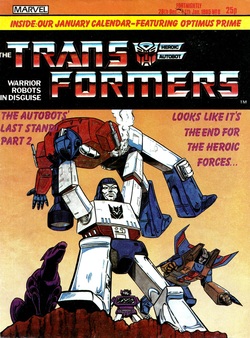 
Did you hear that squeak?


Here we go then, the big climax to the first ever Transformers story-arc. What's surprising is how straight it's played. There's one brief bit of comedy with Ratchet at the hospital where he gets “borrowed” by some paramedics, but other than that (which also serves to keep Ratchet away and safe for future plots) this is a parred down the line action issue that doesn't mess about.

And this means that this is the first instance of how the UK presents the material working better than the original American. In the US this and the previous instalment were just one issue, meaning the slightly distracting and odd comedy with Megatron and Starscream came as part of the package. For the UK that slightly forced change of tone being confined to two weeks ago means the grand final is a lot more focused and consistent a read.

What's really nice about the various fights that make up the bulk of the issue is it gives some soon to be pretty much ignored characters like Huffer and Mirage their moments (in Mirage's case, I think this may well be his last speaking moment in a US story...). Even Bluestreak gets to go one on one with Megatron! And despite some odd moments- what is going on with Prime's arm as he grabs Starscream?- the art is mostly more than up to the task.

That does mean there isn't a huge amount to talk about though, there's just lots of really nicely done fight scenes. Though Sparkplug's flashback to sabotaging Korean Jeeps with the intent of killing those riding in them is surprisingly dark for a Marvel comic.

It's almost a shame that; amongst the generally good action stuff; this is an issue that is only remembered for one thing. The ending. It's a bloody good ending though. Sparkplug's dodgy fuel has seemingly saved the Autobots, and Prime gets ready to give a pat speech (between this and Target: 2006 does he ever get to finish one in the comic?) only for the foreshadowing of the last two issues to pay off, and- awakened by Huffer's probe- Shockwave arrives and kills the few Autobots still standing. 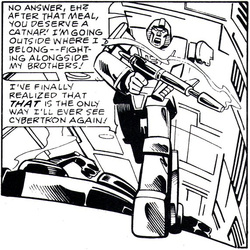 Mirage's last line.
“After four million Earth years I have accomplished my mission-- The Autobots are no more!”

Holy crap. In one line the character makes more of an impression than his cartoon counterpart did in two years as janitor of Cybertron. He even gets a blue speech bubble to add too his awesomeness. This is justifiably remembered as one of the great buttock clenching moments in the entire comic's run.

And in that one small moment, we end Megatron's run as undisputed Decepticon leader. Just four months into the 8 year run he's usurped and, with Shockwave, Straxus, Ratbat, Scorponok, Bludgeon, faux Megatron, Galvatron, Soundwave and whoever happened to wander past the Decepticon base when they were out to lunch all taking turns at leading various groups we will never again be in a situation where he's the only Decepticon leader in the comic.

This should in theory be to the detriment of the character, but it will actually work in his favour. The other guys get to bear the brunt of the silly plots of the week that will wind up making cartoon Megatron look such a tit and he'll usually only take the lead when there's something important to do. They'll still be some silliness ahead, but by focusing less on him the comic will bring out the best of him.

Back in the dim and distant days of the early 2000's when I first became aware of the internet and fandom there was much speculation that this ending was a last minute addition and there had been an alternate, “Happy” final panel drawn where Prime gets to give his speech in case the American series ended here.

A lot of this was based on The Complete Works Volume 2 containing exactly that. These days though, it's generally regarded that the UK team put that together themselves in order to give that insanely overly optimistic series a proper sense of closure. Certainly there's enough set up for Shockwave's appearance (not all of which could be easily cut out) that it's hard to see this being written to end any other way. And readers must have been chomping at the bit to find out what happened next. 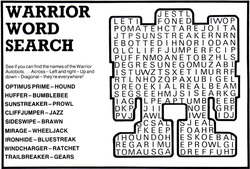 Word Search Fun.
Except they didn't right away, on either side of the Atlantic. There would be a two month wait for Americans between the December '84 issue 4 and the February '85 issue 5 at which point the mini-series would be officially made an ongoing. The UK couldn't skip weeks and therefore would need to do its own story-lines.

Though the comic won't admit to its readers for a good while yet that the material doesn't all come from the same place, the editorial starts a trend of being slightly dismissive of the US stories in favour of the UK ones. Crane is very excited about the epic starting next issue, and even takes time to big up the Optimus Prime January calender included this week. The “Oh yeah, but we've got this last stand thing first” bit feels almost like an afterthought. If not for the need to establish that the next issue is set before this one there's a feeling she wouldn't have mentioned it at all.

The rest of the issue sees 1985 begin in much the same way 1984 ended. Robot Round Up takes in K9 offa Doctor Who, mainly in order to let the writer have an easy time by just copy and pasting some material from Doctor Who Magazine. Matt and the Cat can't seem to decide if it's supposed to be funny or not and Machine Man is still as exciting as a bout of the clap. But he must be popular with the mentally deficient as “Captain Doodlebug” writes in to defend the strip and reveal it's the reason he buys the comic. Oddly enough his address isn't given as D block.

There is one very important moment though, we get another letter that ends with the very fist instance of “Make mine Marvel”. Huzzah!

Barry Kitson's cover is also worthy of note as it's a shameless copy of some of the interior art. But, and this is important, he actually knows Soundwave doesn't have a mouth. Even if he is still purple.

And finally, there's also one very sad note on which to end, after briefly appearing last issue we get the very last showing of Reflector in the comic. The Autobots must have really fucked them up. 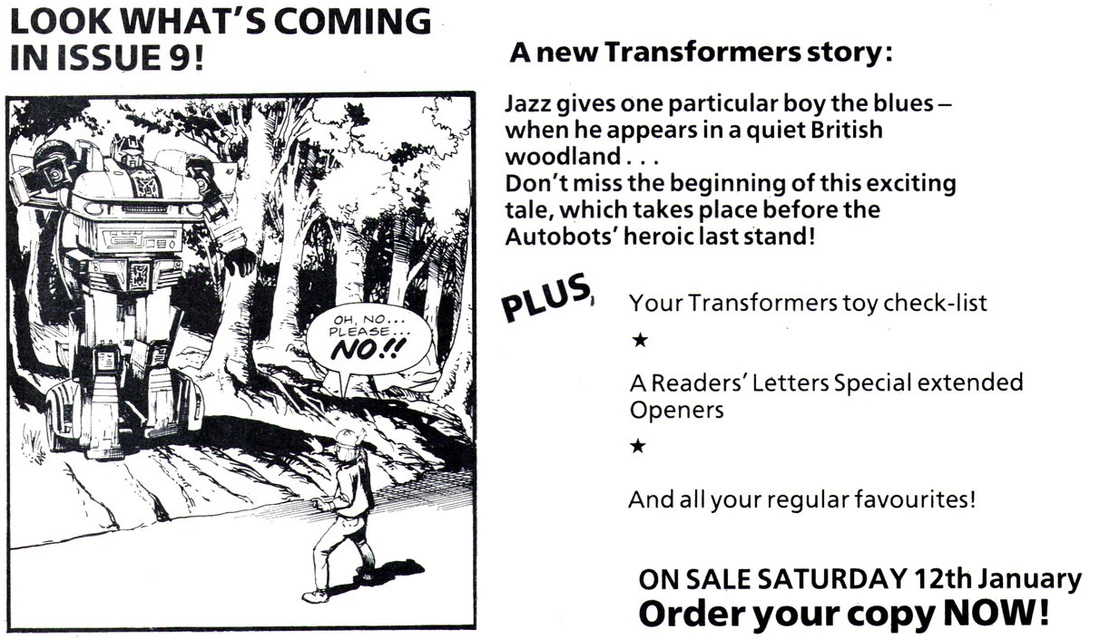