If You Go Down to the Woods Today. 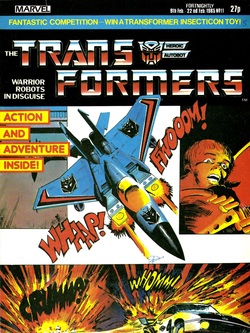 "Well done Sammy! You saved me!"
"You? It wasn't you I was thinking about Jazz! It was me!"


Theoretically this is the point where things should start becoming a bit more familiar. After the human centric focus of the last two issues and the minimalist depiction of the Transformers themselves a synopsis of this instalment makes it seem like we're veering back towards a more standard (well, from our 21st century perspective, at the time of course a standard Transformers story hadn't been established) framework.

After all, we get more of the robots themselves, a great big fight scene, an increase in the scale of the threat and Optimus Prime being all wise and leaderly.

So why does it still feel so different?

The main factor is the battle is one of most violent and serious we'll see this side of the great toy-deleting fights of the late '80's. I've already spoken about how this story feels like the best parts of the first Bay film in places, and this continues here with the three Decepticon jets chasing Jazz and his kidnap victim being portrayed as unstoppable forces of nature rather than characters. The three way fight between them and Trailbreaker and Mirage is played entirely straight and dishes out some real harm. Trailbreaker is pretty much completely atomised and the image of him on fire is some of the worst damage we've seen yet. And the jets don't do much better. There's a tendency for Autobot/Decepticon battle to be treated like one big game of cops and robbers but this is out and out war where people are killed in merciless ways (even if they'll all get better later on). The fact this is all happening in quiet English country lanes only adds to the disconcerting nature of the whole thing.

Things don't get any more comfortable when Jazz arrives at the Autobot shuttlecraft deep in the woods. At this point you'd expect him and Sammy to bond and become friends, but- despite this actually being important to the end of the next issue- this is avoided. Jazz is still somewhat cruel and manipulative, forcing the small boy to walk on despite being cold and tired. And, as in all the best British kids stories, the fantasy world Sammy finds himself in is as scary as it is exciting. This isn't a jolly hockey sticks romp, the woods are dark and sinister and the Decepticons may well destroy Sammy's entire home village. 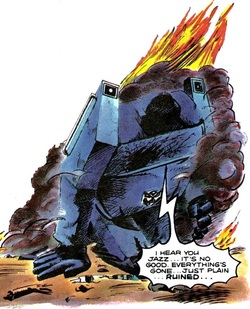 Trailbreaker. Eeek.
We also get a somewhat different portrayal of Optimus Prime, albeit one that will quickly become standard. Up to now he's been front and centre as the book's lead character. Here though he's held in reserve, brought out as the threat escalates to emphasise the increase in the stakes. After he gets his head back it will become more usual for Prime to just top and tail an American story (mainly so new toys can get the focus) but rarely with the same sense of "Oh shit, now it's serious" that you get here.

The revelation that the Man of Iron is part of a rescue team from Cybertron that got just as lost as the Ark is an interesting one as well. It's our first widening of the scale of the story from not just being all about Earth. We won't get any hint of what post-issue 1 Cybertron is like for a good while yet, but this is the start of the road that leads to space bridges and Straxus.

Mike Collins takes over on art and is another long standing Doctor Who Magazine contributor (he even put a non-copyright infringing Optimus Prime into a Tenth Doctor story). But for most of us though he's the guy who drew the early Ladybird books. Which, as actual hardback books, were more durable and lasting than the comics themselves. Meaning I suspect I wasn't the only one who still had a few of them knocking about long after most of my issues had dissolved into pulp (I was a small child! I didn't know how to take care of them. These days they're in a sealed airtight vault). The fact they came from THE kids publisher that everyone in the UK has a certain affinity for means they were the only Transformers media to get even the slightest respect from parents at the time. This ensures there's something reassuringly familiar about his work here even though it's his first issue. 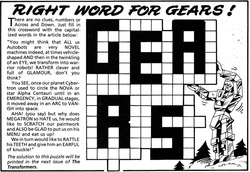 More Wordsearch fun.
In the rest of the comic we get an editorial that sees Crane very apologetic about the piggy bank breaking two pence price rise. Which is about three pounds cheaper than the current 2012 British Prime comic costs. On the plus side they've moved the lead strip about a bit so it takes up more of the colour pages than before. The first letter about the end of issue 8 arrives as well, though at this stage it's just about how awesome it was and that they need to get back to it quickly rather than asking about the continuity with Man of Iron.

In Machine Man The Human Torch and The Thing finally turn up, and in the grand tradition of all comic crossovers they fight the hero. But the main thing that will stick in your mind is Machine Man being turned into a unicycle.

The next instalment should hopefully be going up slightly earlier than normal as that weekend is Auto Assembly.  You'll spot me at James Roberts' table building a small shrine in his honour. It's fitting I'll be finishing off the first UK story in time for the big British convention so join me on (fingers crossed) Thursday as The Man of Iron faces his Waterloo. 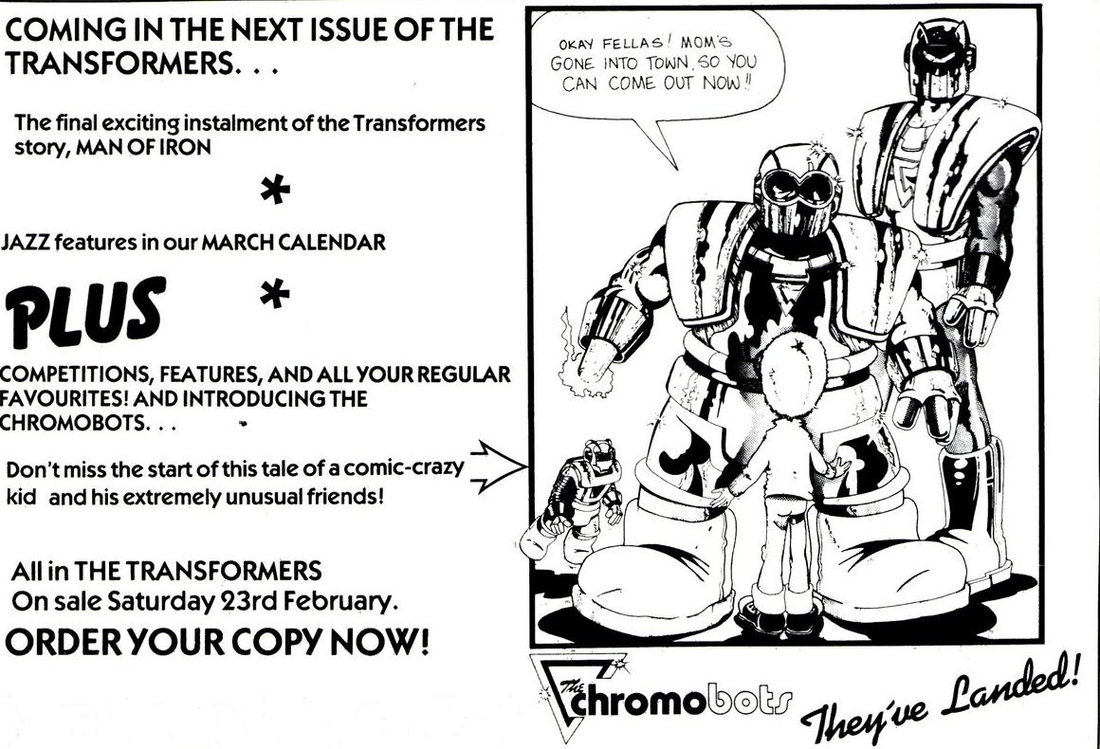