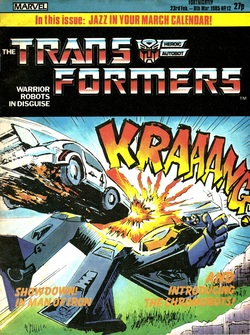 
If last issue's battle on the road was violent and visceral the climax of the story turns almost all of the 11 pages over to an equally straight giant battle. There's no quips, no moments of lightness. This is one of the most unremittingly dark Transformers stories of all time.

Which is something that doesn't get talked about very often, mainly because I suspect the twee countryside setting lulls readers into a false sense of comfort. But the desire to play this war straight and realistically (and thus, horrific) is evident right from the off.

After a couple of pages establishing (in a dry serious manner) that the military have dug up the Autobot spaceship and it's sending out a signal, we get a look at how events are affecting Roy Harker. And he's a man completely broken.

We often see children caught up in the Transformers war (understandably as they're the target audience for most of the fiction) but this is one of the very few stories to look at the implications of that. Mrs. Harker is so distressed by her son's disappearance that she's been sedated, with the implication being that a large part of the reason is her insistence that Sammy was kidnapped by a driver-less car. Roy himself is left feeling completely helpless and impotent by these events. There's even a mention of the M4 being shut down after the battle last issue, this is very much a story concerned with consequences to the little people caught up in it.

Man of Iron Vs. Skywarp.
What's especially interesting is there's no resolution to Harker's problems. He doesn't get to become involved in the final battle as anything but a spectator, there's no clichéd chance for him to restore his confidence by saving his son. There's not even any firm confirmation of how long his wife is going to be kept smacked up to the eyeballs.

Harker's internal monologue is interrupted by the Man of Iron waking up. Which starts this issues centrepiece fight. The Man himself is quickly killed by a Decepticon jet - a different one in both the full colour versions (Thundercracker in the British Collected Comic and Starscream when it was pressed into service as filler for the American book) but dialogue about appearing from nowhere; and the cover; makes it clear he's supposed to be Skywarp.

The arrival of the Autobots sees this turn into a battle that continues the style of last issue. Skywarp, one of the cassette birds and Thundercracker all suffer horrendous injuries. And again, we get a very human and real context to all this as Sammy and his Dad are reunited and left cowering from the explosions as even the army run off.

After all that, it has to be said the end of the story is a bit too neat, with a feeling of the toys (almost literally) being put back in the box. At this stage of course, the Autobots can't just go home without ending the book, and giving them a fully equipped ship that could at least phone Cybertron for help wouldn't fit in with the American stories.

So Optimus takes the slightly forced choice to completely destroy the ship and- for no other reason than shoving in some extra pathos- doesn't even check if there are any other Autobots on-board so poor old Navigator (a subsequent letters page will confirm the description is indeed his name) gets blasted to bits as well. That's what four million years of patience will get you.

It also has to be said that Jazz' thoughts about his “Friendship with a small boy” as motivation for destroying the ship is unintentionally hilarious after his treatment of Sammy over the last two issues. As is the fact he can apparently destroy an entire large spaceship with one missile. Bloody hell, Sparkplug got off lightly. 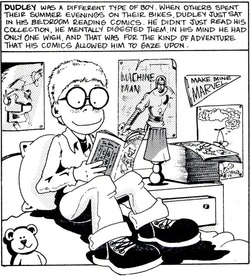 Dudley reads Transformers in Chromobots...
One nice final bit of verisimilitude comes in at the end when we actually get some details of the cover up put into effect afterwards (hey, maybe it's UNIT!), the sort of thing that will be often overlooked. In years to come exactly how much the rest of the world does and doesn't know- and does and doesn't believe- will be all over the place so it's quite nice to have a firm X-Files moment.

The story finishes with our first “Flash forward” as we see that, even a year later, Sammy is still having nightmares about the Man of Iron. Way to go Jazz, you've screwed his mind for life.

It's very easy to see why this became the only UK story the American book would reprint. As well as being set entirely in this country (something only otherwise done by one of the Annual stories) and being the right length to fill a two 22 page issue hole, it's entirely self contained. I can't think of another UK story that stands so completely alone, without even something as simple as the Spider-Man reference in the very next story. With the US presentation coming two years later this is hugely important and means it could be reprinted with nothing more complicated than a “This happened ages ago” note.

The fact it's also very good probably helped as well of course. 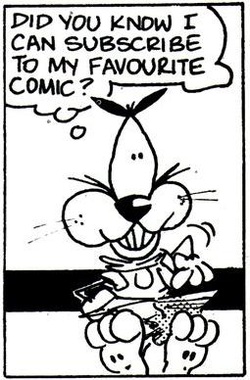 ...and the Cat tries to get you to subscribe.
The rest of the issue sees the début of The Chromobots! No, I've no idea either, it seems to be the least remembered of the back up strips. I think it's supposed to be a comedy, but it's hard to tell as the laughs are mainly from... well... nothing. Lead character Dudley does read Transformers and has both the Matt and the Cat poster from issue 9 and Machine Man on his wall. Which is even less realistic than the robot who turns up, as if anyone is a Machine Man fan. Oddly enough over in Matt and the Cat (which is presumably supposed to be funny as well) the Cat is also seen reading Transformers and talks excitedly about the advantages of subscribing. I suspect some serious brown nosing going on here.

At the time of writing I'm all set for Auto Assembly 2012, where one of the main guests will be someone joining next week. Yes, it Starts... Begins! He puts his first foot on the road to wishing that Regeneration One would end. One of- if not the- most important people ever involved with the franchise gets his first writing credit and things will never be the same again. Join me next Friday for the Dawn of the Furman. 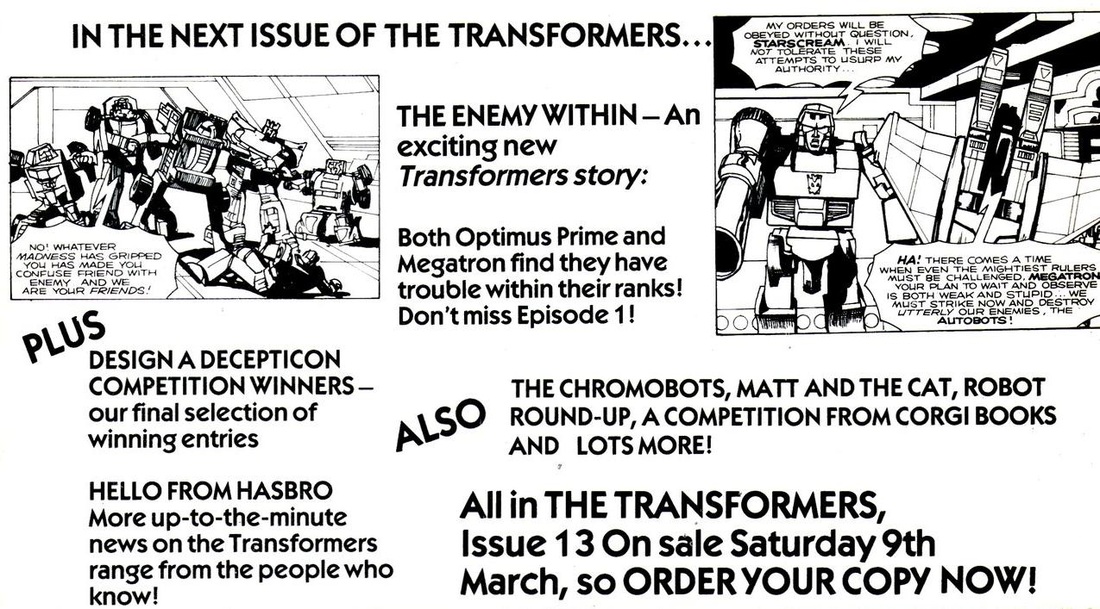