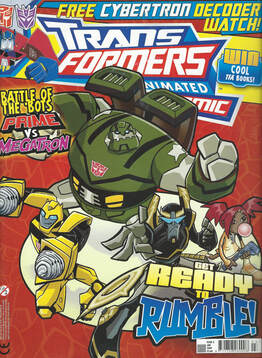 
But I already know how to blow my airhorn, spill my drink and shout rude names!


So, here we are then. Another ending, with Animated becoming the shortest lived British Transformers title to date. A record it still holds, even if you count each volume of the main Titan book as a separate comic (the briefest of which manages four).

Why is a bit of a puzzle. The popularity of Transformers is, roughly speaking, at an all time high (even if launching in the middle of the gap between films might not have been a great idea). The book was started with a big push behind it and a few years later the Prime comic will manage twenty issues, albeit with an increased gap between them, despite that show not being especially more popular in the UK. Yet for it to be canned so quickly, the plug must have been pulled as soon as the sales figures for issue one came in.

So, unless there was some behind the scenes machinations we know nothing off, all I can think of is that the market simply wasn’t there for two books a month. Or at least not for two books with original content, as the two concurrent screengrab comics seem to be deathless. 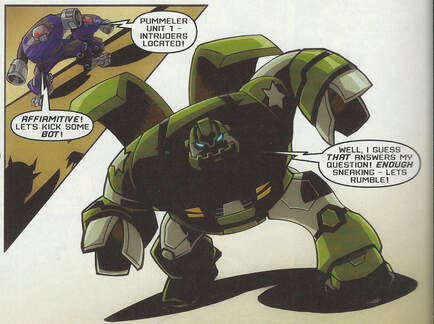 I've been hard on McCrea, but that's a nice Bulkhead.
The original comic, Crossroads (ha, you’re expecting me to make a Benny in his hat joke aren’t you? Fools, as the fans amongst you would have guessed from me using a line from the tie-in song above, it’s the 2002 Britney Spears movie. Duh) is, once again, fairly straightforward.

Said villain, real name Roland Cross, is a pissed off ex-Sumdac Industries employee who is convinced all robots can be made deadly. Thanks to Starscream, he gets a “Sliver of Megatron” that lets him take over every automated system in Detroit, turning them against the people, who then turn against the Autobots when Crossroads make getting rid of them one of his demands.

A quick chase up the Sumdac tower and some ninja action from Prowl take care of the problem, and we end on Afterburn making a totally not full of subtext comment about how Decepticons can be anywhere and strike at any time.

That side of things is all solid, with some nice gags in both writing from Etherington (Fanzone’s exasperation) and art from McCrea (tiddly Sari in the flashback, the mob chasing the Autobots having ready made protest signs), but the real fun is in the brief framing device. Optimus has given the Autobots the day off—and is presumably off sunning himself somewhere during it—and Sari takes Bulkhead, Prowl and Afterburn to a basketball game. 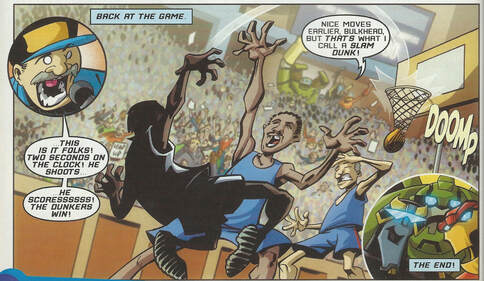 The Final End.
Which is simply the most Animated idea ever, and gets us some nice moments of Prowl being keen on the tactics of the sport and Bulkhead the swearing from the crowd. As the issue ends with them back on the game, that feels like an appropriate, if unintentional moment to bow out on.

Though, as with Armada, the cancellation was so last second that we not only get a “Next Issue” page, but various strips were also close to being finished. Unlike Armada, Titan have another avenue to get those stories out there without totally writing off the costs...

Again, I’m only going to acknowledge the screengrab comic, but do remember that it’s taken from the episode Blast From the Past when reading about the Annual.

Starscreamers (“Why did the Autobot cross the road? To beg for forgiveness from me, the mighty Starscream!”) and Bits and Bots (drawn by Lee Bradley, Megatron accidentally shoots his load into Starscream’s face. SUBTEXT) are present and correct, as is the find the Allspark contest. 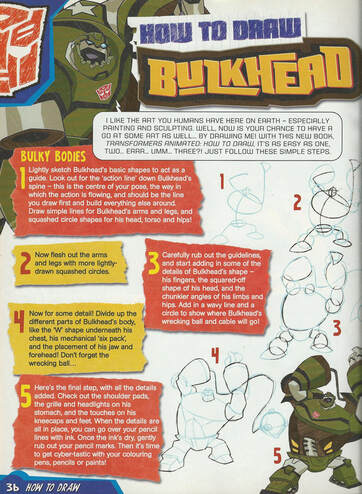 Doesn't sell me on the book tbh.
We get an advert for the still in rude health film comic that for some suspicious reason uses Generation One Prime art.

Puzzle pages this month include Blackarachnia Web of Lies (did you know most spiders have eight eyes? She also gets the poster); Code Breaker (for which you need the cover mounted free gift of a decoder watch); Challenge Ratchet (where he brings the mood down by mentioning his time as a POW); Professor Sumdac’s Design a ‘Bot (create a robot to be featured in a future issue... oh) and the rather complicated new Vs dice game, starting with Prime Vs Megatron. You have to pick attacks and combine scores from two dice rolls and it gave me a headache reading it. Maybe next issue’s Prowl Vs Starscream will be simpler... oh.

Two non-Transformers competitions this month give you the chance to win Astrosaur books and Sarah Jane Adventures DVDs.

Nano-Bites covers the Supreme and Leader Class toys, teases season 3 and forthcoming releases like Swindle and promotes the Animated drawstring bag. Whilst Professor Sumdac Explains tells you about the da Vinci Surgical System and a robot that was employed as a bartender for four years in London. I wonder what they did to get sacked?

How to Draw...Bulkhead, despite having a much similar character design to work from, is just as unhelpful as the film ones. But at least it ends with a chance to win the Transformers Animated: How to Draw book that may be a bit more helpful. 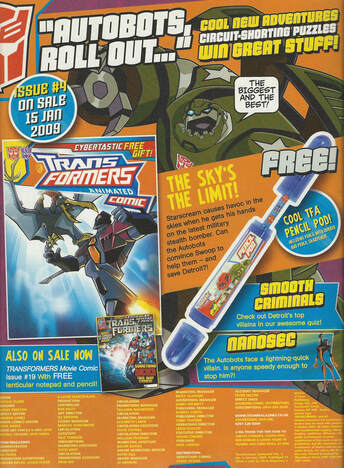 Not in shops soon.
Bee Mail features more art from kids, with Bumblebee encouraging readers to send in more of their drawings for the next issue.

Still, here we are, the end of another year, and despite ending on the damp squib of a cancelled book, the most successful for the British comic in twenty years. Both in terms of sales and quality, with the film book having really found a happy groove and giving Furman’s best work in a long time. 2009 will continue to build on this, and give us a strong transition from first to second Bay film. 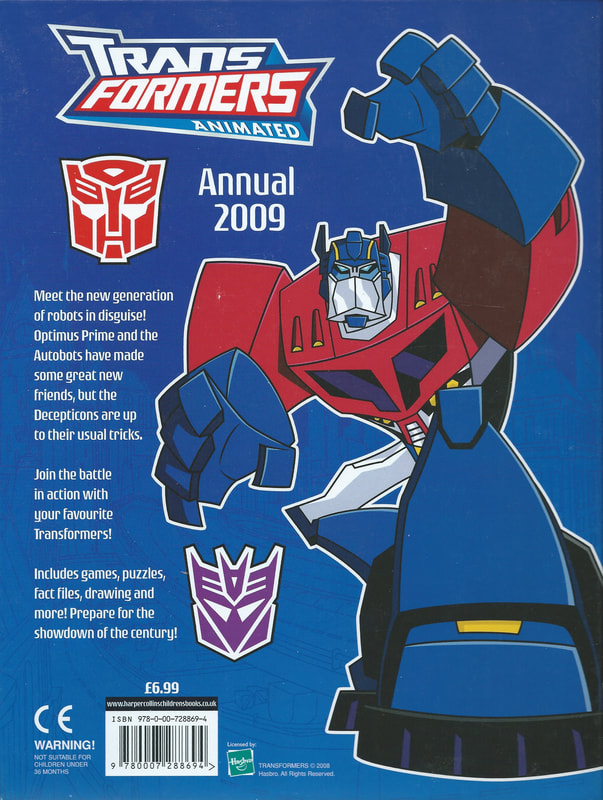