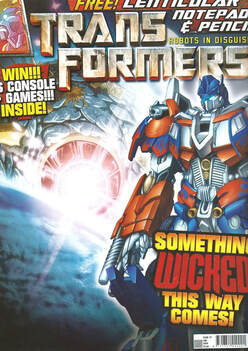 
All that matters now is finding a way to communicate, anything else... is just a distraction.


The thing that stands out immediately this month is the cover. Where Optimus Prime has clearly been slapped on over the shot of Unicron doubling down on Earth at the last second (to the point that the drawing wasn’t even ready last month and a CGI Prime was used instead).

I get why they decided a recognisable character was needed, but it is a bit of a shame as the original art is quite striking and different from any of the other covers we’ll see on the series.

There may not be stock art, but you do get a stock gift, as the notebook is a reuse of the one from issue 7, the first of many instances of cover mounted items doing the rounds.

Nothing sinister here.
After the directness of the Animated issue, the fourth part of Return to Cybertron is back to surprisingly complicated and layered plotting. So to deal with the subplot on Earth first...

Bumblebee’s distress call got through, so Optimus is preparing a rescue mission that means leaving their Earth base entirely in the hands of the seemingly (we didn’t see the moment and I can’t remember how it plays out, but I would not be surprised if there’s a feint) mind controlled Mikaela.

Which I guess means neither Lennox nor his boys survived this version of the film as they’d be far more natural choices to run a military base.

But as Prime leaves in the Straxus (tick that fan reference Bingo card. Bonus point for the shuttle being named after a character introduced in Marvel’s Return to Cybertron story), the team led by Camshaft... err... I mean Evac—guess they timeshare—stays because there is not only a war without but a WAR WITHIN (BINGO!). All of which may be for nought as the issue ends with the Decepticons marching into the Autobot base and Starscream’s troops preparing to retake the country. 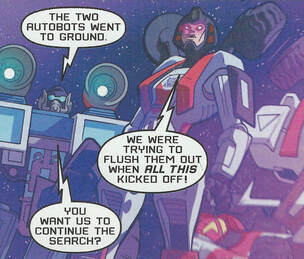 Female Transformer designed not to wank over. News at 11.
The pace here is ruthless on these few pages, but despite lots of exposition it’s well done, with some nice tension over the slightly off Mikaela and has at least one good gag of Ratchet not understanding red lights.

The Cybertron scenes are where its at though. Mainly because Stockade continues to be the star. When everyone else is horrified and scared by the sight of Unicron, he just sees a new pal and is convinced all they need to do is talk to the strange energy form that is reshaping Cybertron with pinchers and moving it towards Earth.

Which gives us an absolutely hilarious scene of Stockade pretending this was all part of his plan as he tries to give a big grand speech to his new bestie about how he has personally summoned the force and together they can be one... before being told to sod off. This isn’t a devilish master chess player chaos bringer, it’s just hungry and wants to eat some good old Terra Firma. 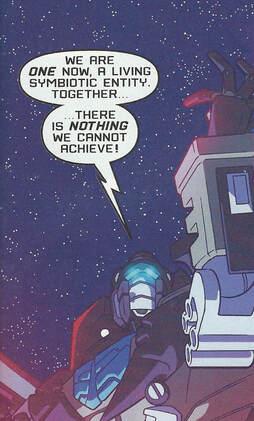 The new Tory leader.
Amidst this, the other Autobots and new Decepticons risk getting lost, but we get a nice little side trip of Ironhide being buried by rubble and the Autobots having to dig him out with typical comments on how tough he is. The Decepticons also get some good “What are we really getting in to here?” reactions.

And in light of the reactions to the latest third party Arcee toy with massive wibbly wobbly tits, it’s great to see Fracture be a solidly written lackey who has a body shape that’s just based on a fairly androgynous toy rather than it trying to be all FEMININE for the incels to wank over.

Stockade remains the all out legend here, but, for an issue largely concerned with moving pieces into place for the finale, there’s still a real kinetic energy here that carries it well and, with some fun cartoony art from Cosmo White, remains stronger than it has any right to be and ends the first full year for the comic on a high. 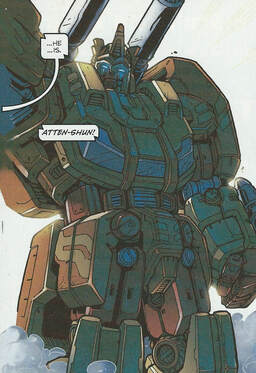 He's been tangoed.
Megatron Origin is mainly given over to a briefing for Sentinel Prime and his police force (including Whirl, which would later be retconned out hard by the earlier set Chaos Theory), before we cut to Bumper and some other generic Minibot pal spying out a location for the next match.

Which actually gives us a nice visual of the Constructicons turning up to build the arena (using an empty from The Smelting Pool! as raw material, this is definitely the issue for fans of references to that story), before Soundwave appears as an agent of Ratbat, offering new weapons for the game.

Which also shows us how Soundwave’s TV voice, based entirely on sounding cool but incapable of sustaining sentences of any length, just doesn’t work when you try and replicate it in print as it denies him character by sticking to the limitations of another medium. 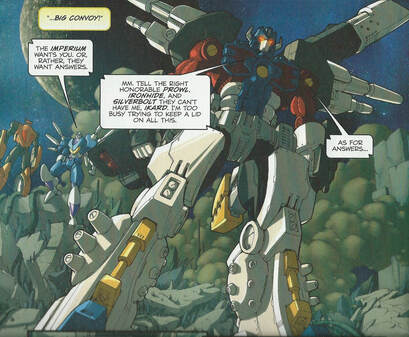 Big.
Beast Wars has a recap that helpfully reveals that Shockoract is in fact the ghost of Unicron. So... I’m not sure why he was taking orders from the ghost of Unicron earlier, but they are talking about themselves as if all the angolmois collection is for their benefit.

Speaking of which, because some form of the Japanese Beast shows happened previously to this (even if they’re not technically canon), when Big Convoy is led to some, everyone present already knows what it is and it doesn’t need explaining. So the reader is left none the wiser.

Making the most comprehensible bits of the issue Magmatron sucking Ravage into his white void and telling him to team up with Razorbeast, whilst Leo Convoy arrives in the past to give help. And I think the UK team have added “Paydirt!” to the end of Break’s speech bubble so the issue doesn’t end mid-sentence. 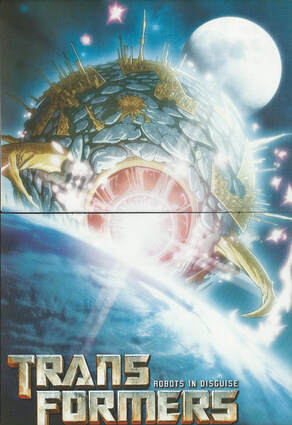 Primeless cover.
The editorial page is shrunk down for a big Sonic Unleashed advert that shows Sonic with teeth is no new thing. We’re also reminded it’s Christmas and Unicron is like the star of Bethlehem. Which is such a nice coincidence, I’m assuming its true. Especially as the bonkers final Devil’s Due Transformers/GI Joe crossover also did that gag with the character.

The one side of the poster is the original cover art, and looks grand. The other is the second half of the Many Faces of Megatron poster, but really, with the exception of the 2001 Robots in Disguise Megs, its different faces of the G1 version. Including the original, G2, War Within and Galvatron.

Competitions this month include one for Animal Crossing on the DS and, in a bumper Top Gear... Animated on the DS; Cows in Action: The Battle For Christmas books; Doctor Who season 4 (guest staring Peter Capaldi!); Space Chimps; Brendon Fraser’s Journey to the Centre of the Earth (a film I had forgotten the existence of) and a Salvation 3 remote control helicopter.

How to Draw... Bonecrusher is the usual swirl of incomprehensible swiggles. I’m starting to suspect it's the same piece every month with a different name and final art slapped on. 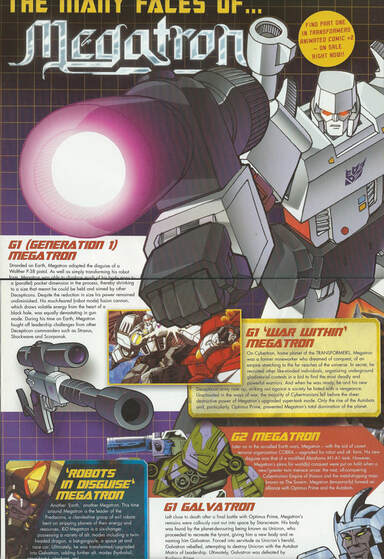 How did RID sneak in there?
Star Screams reveals the fiction Decepticon is more welcoming to female fans than many real male ones in the space year 2019. Dad Martin writes in on behalf of his daughter Megan—who cried when Starscream died in Armada—and her sister “Unicron”. So called because she tries to eat all of Megan’s toys. Starscream is impressed enough to bestow the honour of “Simpering minion, first class” upon her.

Over the page and Kirsty, age 17 from Lithium, not only sends in a photo of her toy collection, but tells Starscream he’s cute. Which he isn’t so sure about after looking it up in the dictionary, but he is down with “Cull, curtail, curmudgeon and curfew”.

So, is the future all girl? Let’s hope so.

Next week, we end both 2008 and the Animated comic. 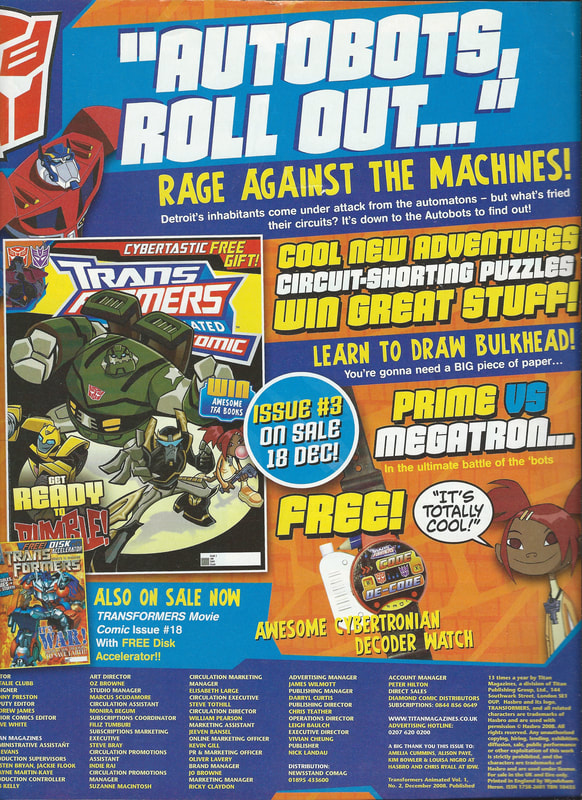