Here Before You Stands, the World's Most Handsome Man. 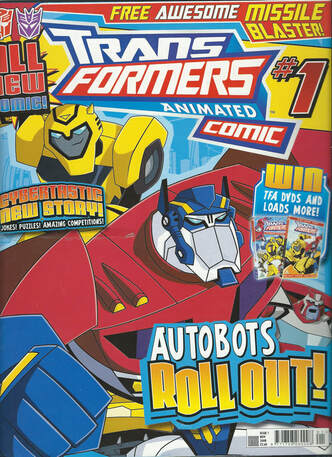 
The accompanying Addendum looks more at the cartoon this brand spanking new comic is spun-off from, meaning I can jump straight into the title itself, starting with two things that surprised me about the lead strip.

The first is that, like the movie comic, it’s eleven pages. I was expecting, considering both its aimed younger and that the eleventh page was a recent reward for good sales, for it to be a few pages shorter. That immediately shows a degree of faith (or at least Hasbro support) in the title that, ultimately will not be justified.

The second was that the strip is written by Furman, I didn’t think he’d done any of them (and the switch to a newer, cheaper, author we’ll discuss later may well be a sign of a decreasing budget). If you’re only familiar with his Transformers work Furman seems a poor fit for a rompy light hearted take on the franchise, but of course, effectively his day job was working on cartoons more in the Animated style than, say, Infiltration is. So this arguably gives us a better feel for his Noughties writing than anything discussed so far. 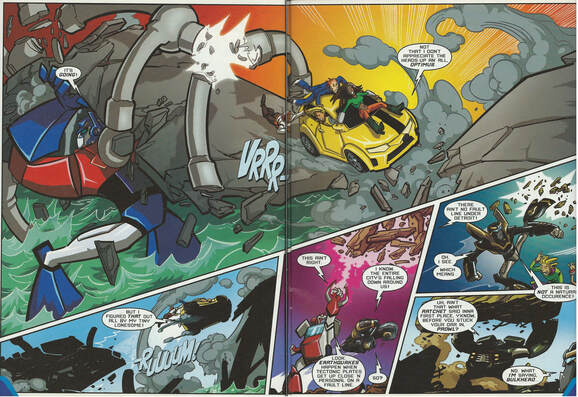 Introductory spread.
Burnout is set during a vague period of cartoon’s second season (though that’s not apparent till the end), and introduces the Autobots in a battle with a new human supervillain. Called Quake Maker, who looks like the Jim Carrey Dr. Robotnik crossed with the Jim Carrey Riddler who has made Sonic’s gold rings into a series of fashion accessories.

The character is largely irrelevant, Bumblebee cheerfully takes the piss out of how no one cares about his backstory or motivation, so the purpose of the sequence (including Titan’s second ever double page spread) is simply to put the Autobots in a variety of action poses that shows off their personality, so Bulkhead is comically dumb, Prowl overly serious, Prime feels inadequate after he fails to penetrate Quake Makers force field and Ratchet is clearly the one Furman had no idea of the character of as he doesn’t really get anything.

It’s what happens after Prime is swept aside by Quake Maker that is both odd and, at the time, controversial. Brand new Autobot character Afterburn appears to save the day!

Now of course, new characters without are not uncommon in Transformers, and unlike Beast Wars said toy-line was largely different iterations of the core cast than dozens of additional blank slates (at this point the Classics and movie toys were making up the difference). So if you have a specific narrative reason to need a new guy, and there will eventually be one, starting from scratch is what you had to do.

But it feels strange to come up with a storyline needing a new character right off the bat with the first issue rather than keeping the focus on the lead characters and then, once you’ve established the status quo, start getting inventive as you go along. 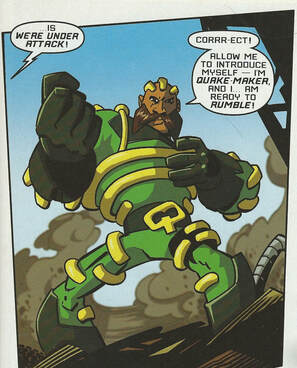 Quake with fear...
The character was also controversial in what was the only real attention the series got after a preview was put out where he was called Sideswipe. The Wiki suggest the fandom’s negative reaction to the Iron Man meets Skeletor design might have pushed the change, but the comic only came out two weeks later, which feels a bit short notice. Plus the title of Burnout only actually makes sense if he was called Afterburn, suggesting an earlier change (if it was done in a hurry, it’s hard to imagine them bothering to change the name. Unless it was originally Wipeout?) than that the preview just used an older version.

Which leaves the question of why the change then? The Wiki, again, suggests Hasbro not approving using a “Proper” Transformer name for a villain, which is, I suppose, as good an idea as any. Though as I believe I’m the only person to have thought about this comic in ten years, it is probably something we’ll never have a firm answer to. Whatever the reason, it means the book did start off on the back-foot with fans, at a point when Titan were still keen try and keep the older fans aboard.

The net result though is that Afterburn is awesome and amazing and brilliant and even Sari loves him and he’s probably enough by himself to make the heads of men who think A Woman in genre entertainment is a Mary Sue explode. Certainly when he defeats Quake Maker with a kick that would clearly break a human’s back, followed by a recorded message from Ultra Magnus saying “AFTERBURNER IS COOL”, Prime is left feeling more inadequate than ever. 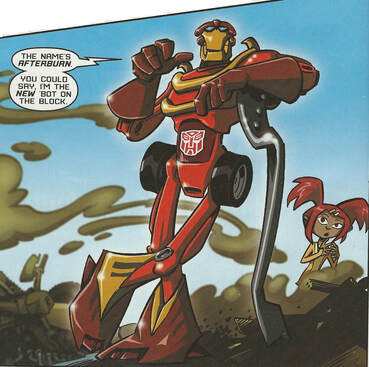 Straight from his home planet.
But, gasp, could Afterburn be more than he seems after we cut to the Decepticon base and have Megatron, head reunited with body at this point, declaring that after an earthquake there will be “Aftershocks” in a sinister way.

This isn’t a bad opening despite the oddness of the new character, actually capturing the feeling of the show and with some nice action beats. It’s not as solid as what the film comic is doing at the same time, but trying to achieve very different things and doesn’t do too badly at it.

Art is by John McCrea, who is one of the few people to have both drawn Transformers and had a mainstream comic career. Which isn’t something that would be immediately apparent here as, whilst his art on the established characters is fine, any time he’s required to come up with something of his own, be it Quake Maker or Atferburn or even the background humans, it tends to look awkward and ill-proportioned.

The backup strip is our first introduction to the slightly strange in the 21st century phenomenon of the photo comic. These were more a thing before home video, as a child we had several ones adapting Star Trek episodes, but it seems a strange thing to bother with when any kid who really loves the episode could just grab the DVD. Still, starting with Animated, dozens of little books adapting an episode from screen-grabs have been produced. They seem to mainly be for libraries and a full list is hard to come by (at least from my extensive research of looking at the Wiki), but in 2019 both British Transformers contain nothing else. 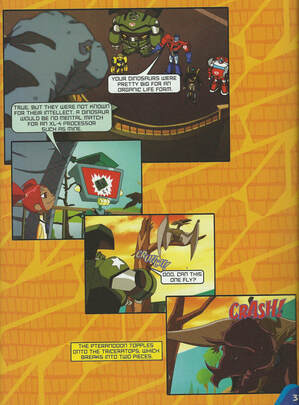 Sample of the photo-comic.
The problem is, they’re not done very well. Images are chosen badly and often seemingly at random, with little thought given as to how the story flows through still imagery. There are moments where the narration has to do some heavy lifting and, whilst the Animated ones seem to have a higher page count making for a slightly smoother read, it’s still not great.

And there’s a unique problem to these reprints, that these were intended for small paperbacks, blowing them up to slightly larger than A4 means the quality of the screen-grabs don’t stand up, with everything looking very low resolution and messy.

As such, other than acknowledging their presence (it starts with Blast From the Past, the first Dinobots episode), I’m not going to be writing about these adaptations in any depth.

The comic itself is basically a slightly younger aimed version of the established book, again giving us a sign of things to come. Starting with a short little gag strip on the contents page, Bits and Bots, where Bumblebee assures Optimus he’s fixed his leader properly despite having left a bit out, only for Prime to fall apart. This is drawn by Diego Jourdan but, more importantly, written by Robin Etherington, who will go on to take over the writing reigns of both this book and the main title, becoming the second most prolific writer of British Transformers comics. So a name to watch out for.

The page also gives us Starscreamers, jokes from our favourite con. “How do you stop a Decepticon from destroying you and the rest of civilisation? You Don’t. Obviously”.

The new writer on the block.
Roll Call is a quick summary of the main characters and set-up for those who haven’t seen the cartoon; Quiz pages include Character Puzzles Starscream and Challenge Megatron; Nano-Bites and Captain Fanzone’s Fan Zone promote the Nintendo DS game, Annual, DVD and toys; there’s a competition for said DVD and Team Titan! makes it into print this time, promoting both this book and has Team Titan Talks! present the new character of Punchface. Which for some reason has a sick burn aimed at Care Bears.

The second half of the Optimus Prime poster covers Animated, Movie (who really should have been the centrepiece of the one in the other book, Armada and a quick summing up of various others that describes the IDW continuity’s corrupt Sentinel Prime as a precursor to the classic G1 Rodimus.

For some reason Marvel Primus is in there as well, despite not being mentioned in text.

Bee Mail is the first Titan letters page to be hosted by two argumentative Transformers, one nice, one grumpy. Though here it’s two Autobots, Bumblebee and Ratchet. With the book having been trailed for months, it has some genuine letters, with the most telling being from Blaine Fox, 14 from Co. Tyrone, who asks when the toys will be out. Hasbro UK distribution continues to be terrible.

Of course, Animated is not just a cartoon or comic, but also a show. So join me next as I sum up the start of the series... 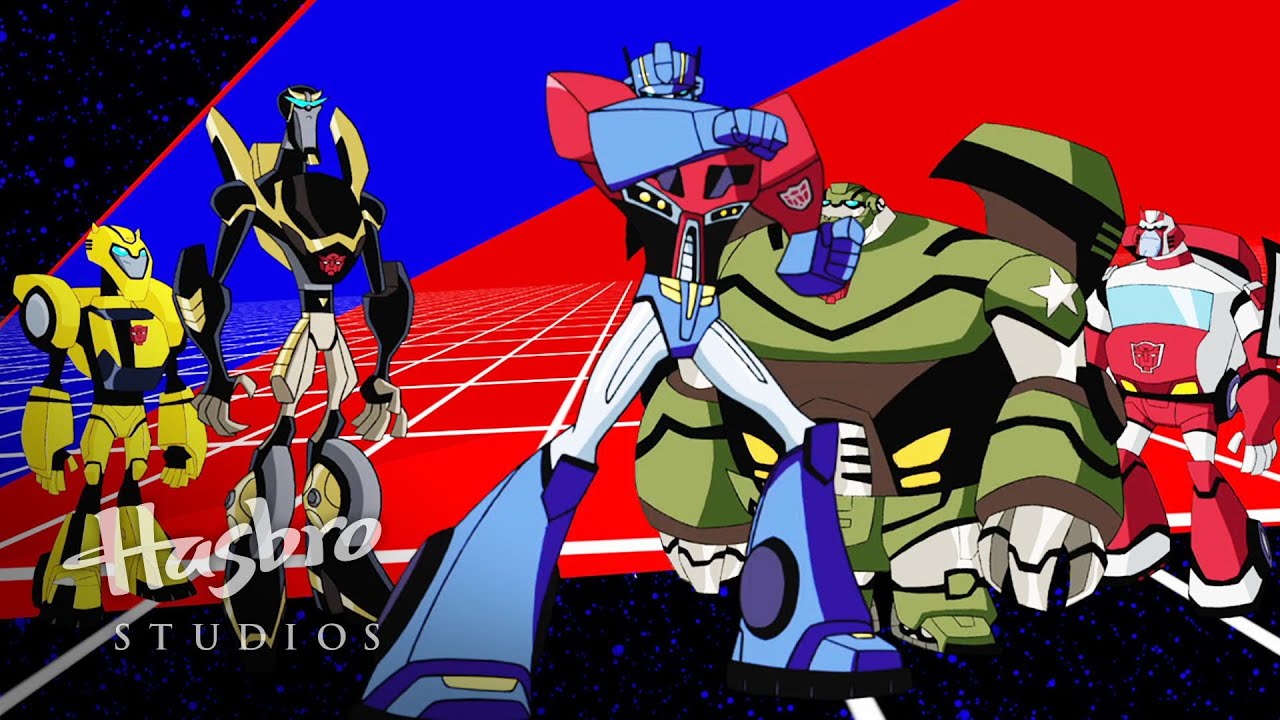 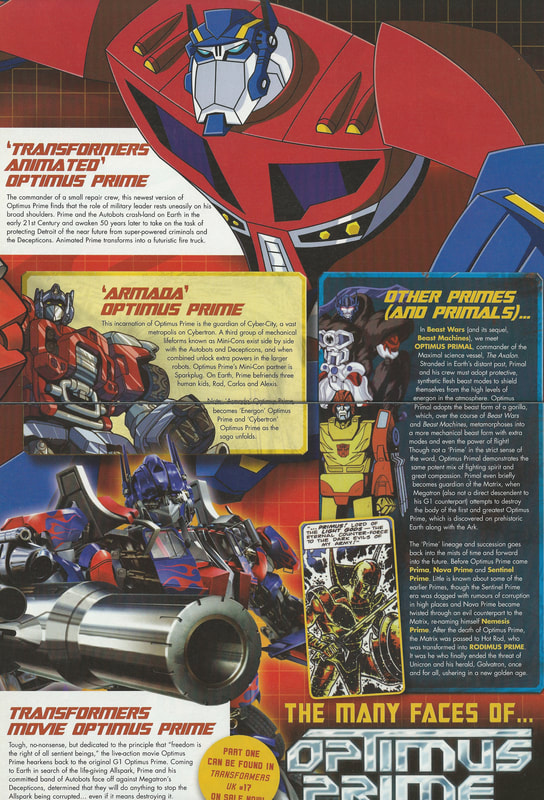 The second Prime poster in full.