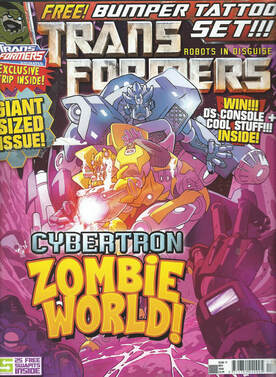 
It’s a big issue this month, being the last before the launch of the Animated comic it not only gives that a big push, but also starts the newest and most attention grabbing story the series has attempted to date, presumably to capitalise on any extra interest generated by the promotion for the new book.

The amount of effort put into making you care about Animated is actually impressive, culminating in an exclusive six page strip here. I suspect the costs of which were largely absorbed by Hasbro. As ever, getting decent penetration of a Transformers cartoon in the UK is going to be tricky, and they were likely very keen to wring every bit of extra interest they could out of it.

We’ll see how well that goes. 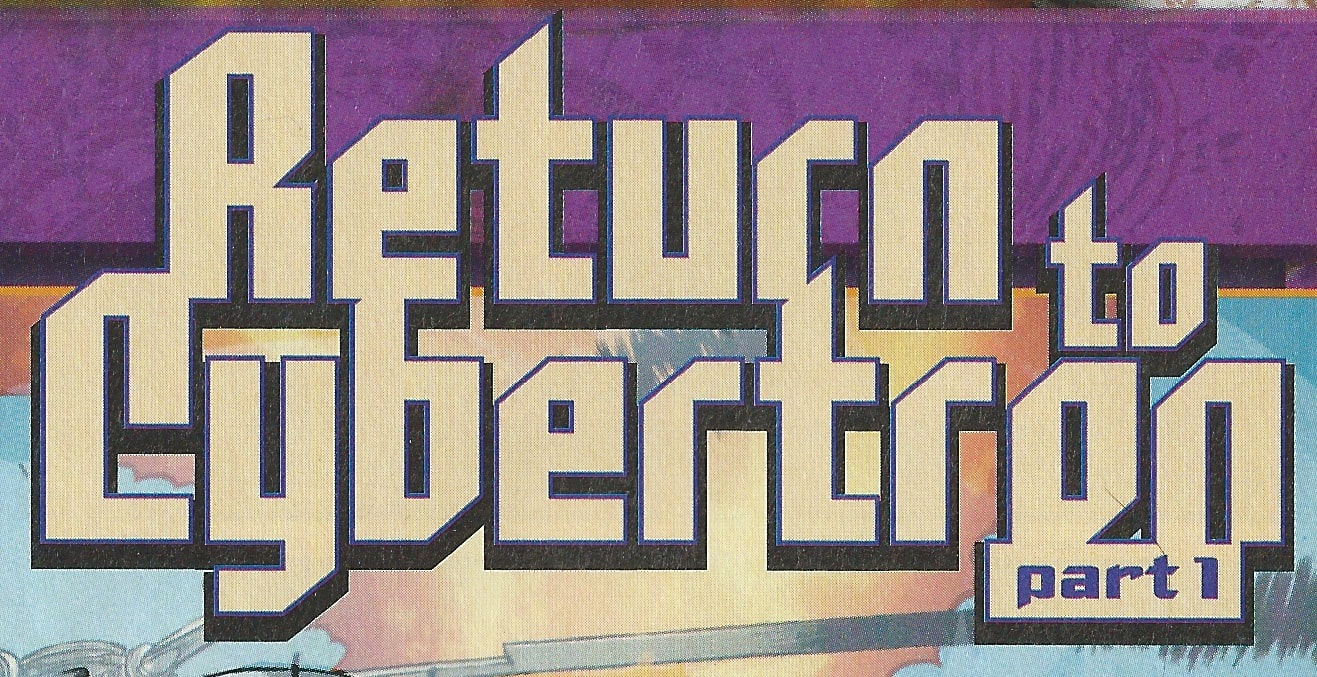 Team Leader Camshaft and friends.
The lead strip though does exactly what it says on the tin with Return to Cybertron Part 1. This arc is going to pre-empt a lot of ideas the sequel films will use, but right of the bat it gives us a glimpse of the future with the first art from John Davis-Hunt, who go on to be the title’s most prolific artist (indeed, one of the most prolific UK Transformers artists full stop), drawing the entirety of the second volume before going on to an impressive career that includes drawing The Wild Storm for DC.

The opening salvo of the issue deals with the further degeneration of Earth, as Evac’s... I mean Camshaft’s (who is supposed to be in charge has been forgotten already) team from Cybertron try to stop the destruction spreading, only to fair a see a sizeable area explode in their faces.

President Allen—and why a regular artist will be a good thing is shown by the fact he is now twenty years younger and blond haired—isn’t pleased that the specialists have turned out to be so useless, meaning Prime has to repeat just how messed up things are. Which is handy for readers. 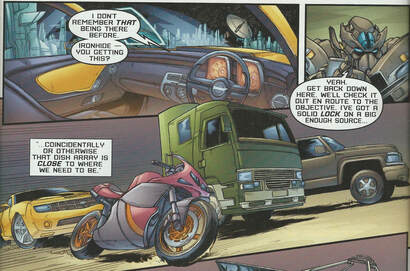 They have returned to Cybertron!
What Prime doesn’t tell though is he has a plan he’s not revealing as it’s such a long shot. Which involves sending a team comprising Ironhide, Bumblebee, Arcee (another new design) and Armorhide to Cybertron to try and gather something called Nucleon.

What is a bit of a shame, though it’s going to become standard for all future film set stories, is the idea the Transformers become their own spaceships is quietly dropped and they have to fly to Cybertron in the Sulaco from Aliens.

For a dead world, the planet looks to be in surprisingly good shape (certainly more so than it will either of the times we’ll see it in the films), and there’s a mysterious transmitter dish that’s brand new, right by where the nucleon should be.

Which is where the breakout new character of the dark timeline is introduced: Stockade. Big, beefy and nuts, he and his New Decepticons (including the based on the Gobot Crasher, Fracture. Meaning three female Transformers have appeared in this comic to date, a 300% increase on Furman's previous work) have occupied the planet and are stronger, faster, better thanks to the nucleon. 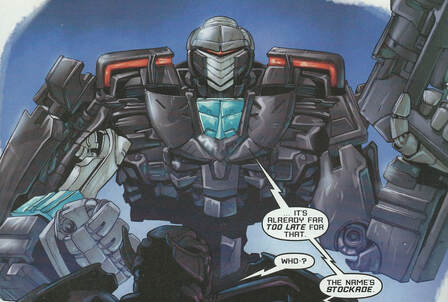 Big dick energy.
Which basically means Stockade can deliver a great big smack-down to Ironhide, who only really succeeds in breaking his fist on Stockade’s body. It’s a lovely, striking sequence that means the new character immediately makes an impact.

Especially when it turns out he’s used the dish to summon... something that will re-power Cybertron.

Something that’s a big ball of energy. A circle with some pinchers coming out the sides.

There’s something very familiar about that.

Of course, I remember doing “Lol, Unicron” jokes at the time, but I never thought that the comic would actually go there. But more on that next month.

This is a very well done start to the story, wasting no time in getting things into place and wisely taking the requirement to focus on the many non-film toys to bring in a hugely fun new villain.

On art, though some of his posing is a bit odd at this point (Ironhide seems to be trying out kung-fu moves as he comes off the ship), Davis-Hunt has a clean, sharp style that works nicely with keeping the Bay designs coherent and shows great promise for his future, prolific work. 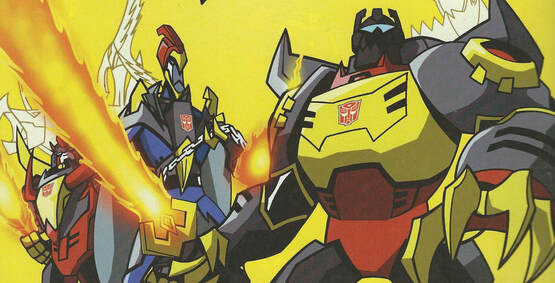 How you tell Furman wrote this.
The Animated bonus comic, Dino-Mite!, is written by Furman (who won’t be the writer on the main title) and drawn by Lee Bradley, with colours by Kris Carter. It sells the series a little better than the previous effort, starting with a nice full page spread of Starscream paying homage to the iconic cover of the final part of Time Wars, standing over a pile of Autobot bodies whilst declaring he “Beat them all!”.

It turns out he’s actually used his army of clones to take over the Autobot base as he wants somewhere no one will look for him to hide out from Megatron (I’ve still not watched any Animated at this point, so how well this fits in with the cartoon is something I’m not qualified to comment on, but come back next week...).

Luckily their human friend Sari has made it out of the base and to Dinobot Island, where she encourages Grimlock, Snarl and Swoop (apparently the later two having names and speaking at this point is a continuity error) to come and help. Which they do, with a fun and fast fight scene that sends Starscream packing.

Unfortunately, Sari had to promise Grimlock the Dinobots could stay at the base till it stopped raining on the island, leaving Optimus frustrated as the poor weather report for the foreseeable future as they take up a lot of space in his house...

It’s a nice little throwaway story that I think helped ensure a decent amount of the readers at least tried the first issue. 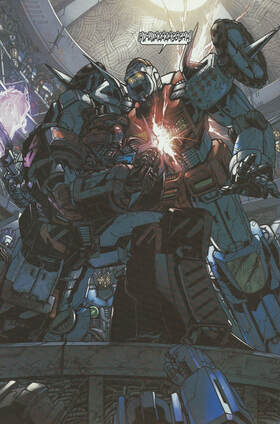 When will this Cy-Kill of violence end?
Megatron Origin is actually a mesh of the final two pages of the first issue—where Sentinel Prime isn’t hugely bothered by Megatron’s escape—and the opening of the second, with Megatron fighting and winning a gladiatorial match against Gobots villain Cy-Kill because that’s hilarious. So hilarious it kept happening in noughties comics. Crasher is in the crowd as well, meaning she’s everywhere in this issue.

The opening is actually quite funny considering a lot of the retconning that was subsequently done with Sentinel. Here’s he’s just a high ranking cop (exactly what the Prime rank means has been all over the place in IDW) rather than SPACE Trump. Merging the two issues also shows one of the plotting problems with cutting a pitched six issue series down to four, Megatron goes from running to being a sportsman between pages with no indication of how he managed it.

More interestingly in terms of what came later, is the use of “Till all are one” as a chant at these gladiatorial matches and the presence of Overlord in the crowd. Two things that would later be combined and paid off by James Roberts in an early More Than Meets the Eye arc.

Plus of course, we’re now into the part of the story deeply indebted to State Games. 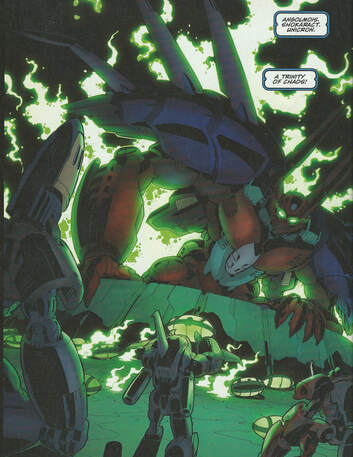 That famous trinity.
Beast Wars sticks to content from the first issue and is therefore quite a short part, seeing Magmatron use his time hopping to influence the strength of the signal the Maximals tried to send at the end of the first miniseries so that it now reaches Cybertron. Which alerts Leo Convoy and the pack, meaning a mission to Earth.

But is it too late, as the “Trinity of chaos”, Angolmois, Shockaract and Unicron arrive on Cybertron!

Yes, bad writing makes it seem like Angolmois is a character rather than an energy source. And Unicron isn’t physically there. This failure to properly explain concepts most readers won’t know is only going to get worse.

The free gift is some more rub on tattoos and the contents page (Planet Terror!!!) makes a small snafu by describing last issue’s events for the reprints.

Can’t wait to see what’s on the second half of the poster. 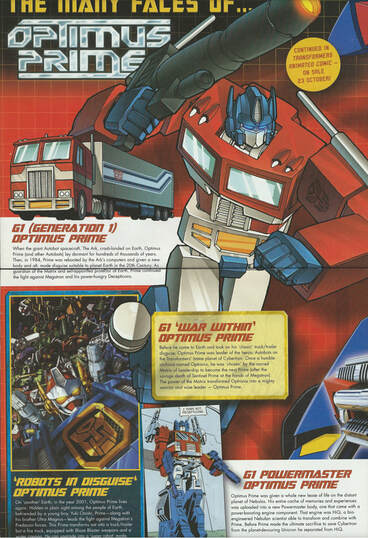 Forgive the size of my scanner cutting bits...
Starscream’s 10 Rules on Ruling is a double page feature, including a Soviet propaganda style poster of the Decepticon inspired by the Trevor Hutchinson covers to All Hail Megatron. Said rules include things like “Pretend to love the people, but always plan to use them to make walls and roads—preferably by sticking them together”.

Competitions are everywhere this month, again suggesting an intentional push on the promotion. This includes: Next Avengers DVDs and portable DVD player; a Nintendo DS and Sonic Chronicles game; remote control helicopter and car and, in Top Gear, Marvel Transformers Crossover toys; Universe Sunstreaker and a lunch-box that tries to be macho by having military cameo patterns on it.

How to Draw... Scorponok shows Lee Bradley cannot draw Scorponok, and gives kids unhelpful at that level advice about drawing different things on different layers and combining them in Photoshop.

Way Past Cool! gives fluff reviews to Sonic Chronicles (I wonder how they got a competition copy?); FIFA 09; Midnight Club: Los Angeles and Spider-Man: Web of Shadows.

The Beast Wars profile is for Leo Convoy this month, and actually uses art of Leo Convoy. What I wouldn’t give for a big Stockade fact file though.

Artobots continues to cover the generations, with an especially nice G1 Megs from 17 year old Caroline Smalley from Lincoln.

Team Titan has been such a success that both it and its funny comic strip are now relegated to the Myspace and Facebook pages, making it the Website of the Month on Star Screams. 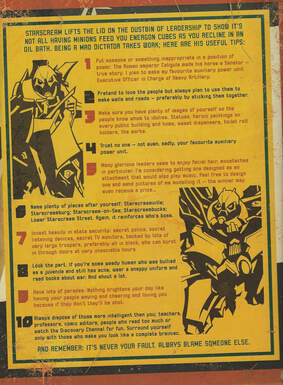 Starscream Rulez.
The big news though is some intel on Revenge of the Fallen given out to Bradley Lendrum is response to questions. This includes: The Dinobots won’t be featured as the writers can’t think of a way to include them easily; the Fallen is “Rumoured” to be a new character, so Megatron won’t be returning, but Soundwave and Jetfire will feature and Unicron will hopefully not be appearing as who’d want him back?

Which at this point seems a joke a the expense of the Beast Wars strip, but the other shoe will drop next issue.

Amusingly for this weekend, the back-cover advert is for the DVD release of The Incredible Hulk, reminding us of a time when it looked like Marvel had messed up trying to bring together all these characters almost immediately. Still, head to Woolworths to pick up the disc.

Next week, I start alternating with the hot new comic on the block, and actually watch some of the cartoon. 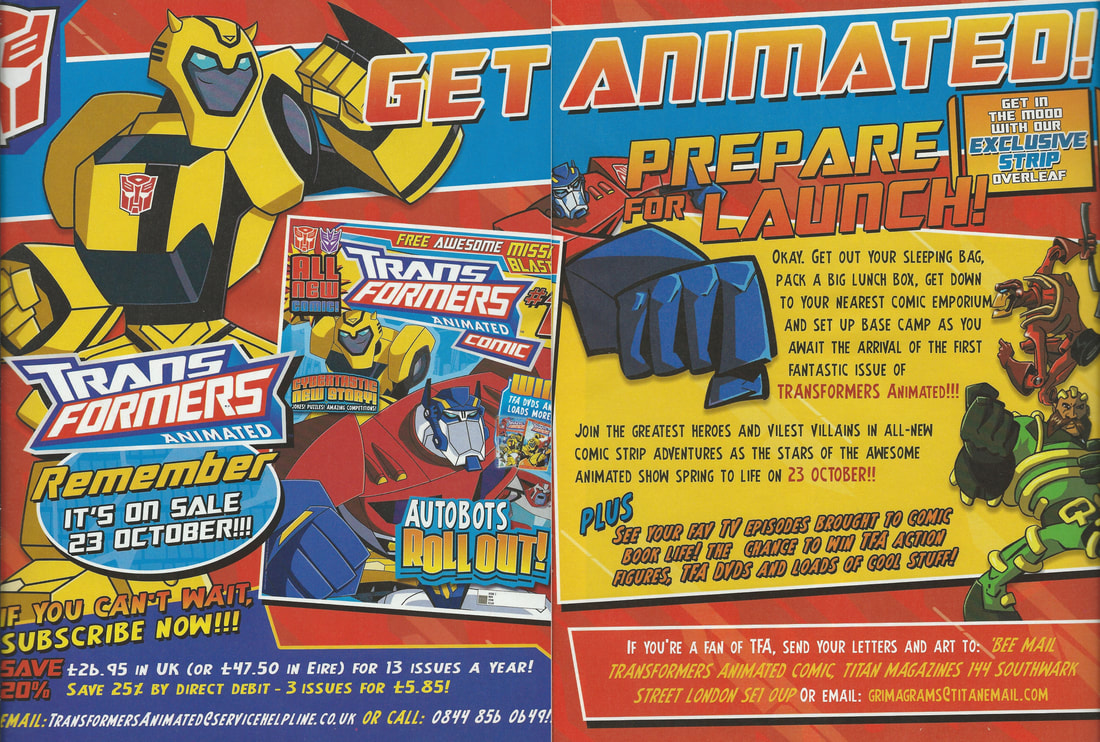