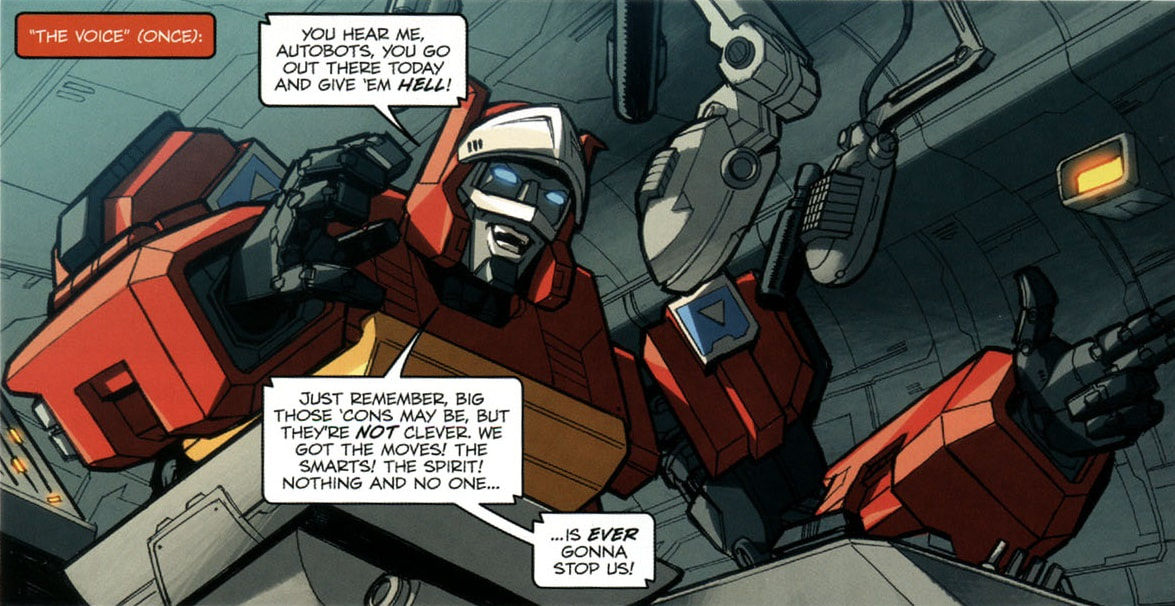 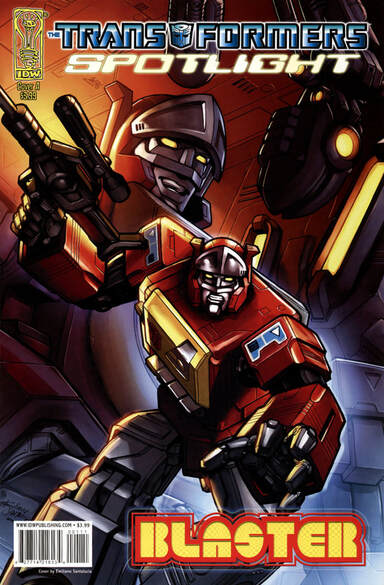 Funny thing is, I wasn’t unarmed. I used the biggest and best weapon in my arsenal. My voice.

As the difficult and odd transition from Furman’s era to that of Shane McCarthy starts to kick in, there’s going to be several comics where the behind the scenes issues we’re not entirely clear on are more interesting (or horrifying as we’ll see in two weeks) than the actual story.

Spotlight: Blaster may not be the most notable of these, but it probably has the biggest gap between those mysterious behind the scenes issues and the actual impact the comic had. This is truly the forgotten story of this era. Its dangling plot threads will never be mentioned again and how it writes Blaster will be pretty much entirely ignored. In later years, IDW will delight in revisiting the most minor and forgotten old story elements whilst never once touching upon anything from this story. It’s the redheaded step-child of the Spotlight run, with even the dream sequence Mirage getting a follow-up this doesn’t.

The behind the scenes question from all this, is why this comic now? The wheels are well and truly turning on replacing Furman at this point, that his stories are going to be wrapped up quickly and somewhat desperately is already underway. So, why a relatively standalone piece that does not touch upon any of the ongoing plots, but instead sets up a new ongoing plot that surely Furman must have realised he would not get a chance to revisit. 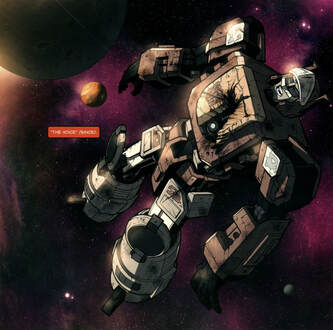 I always wanted you to go into space, man.
​All I can think is, this issue was written and drawn (probably the more important factor considering IDW once ditched an entirely written miniseries in the Punch/Counterpunch one) too far in advance to be dropped and replaced by something that could have helped ease the burden on the forthcoming rapid wrap-up, by perhaps taking on one of the minor plots like the Magnificence or the facsimiles in the US government.

Or that Furman really was that out the loop on what All Hail Megatron was going to be that he thought he had all the time in the world still.

The fact that this is a comic that is hard to read without the context of the situation around it makes it easy to overlook that the basic idea is a good one: To take Blaster’s conflicting portrayals in the cartoon (and UK comic) and the Budiansky written comics and merge them into one, Ultimate Blaster. And, because it’s a modern Noughties Furman take on an 80s concept, it’s about breaking the cheerful party dude and turning him into that broody loner seeking vengeance.

Which is emphasised by the first page, split between Blaster doing a rousing speech over the airwaves to the troops in the past, and his battered and dead looking body floating through space in the present, before he’s picked up by some passing aliens who return him to the very surprised Autobots, who thought he’d died years ago. Betrayed and thought killed by a fellow Autobot, an Autobot Blaster must have trusted to let them get that close. But being dead and floating in space for years means he just doesn’t remember, forcing him to wander the station he’s recovering on, looking at old friends like Bluestreak and wondering who could have turned on him. 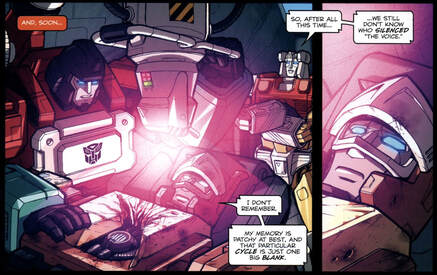 "We probably should have looked into that at some point"
Effectively then, it’s a murder mystery, with the present day stuff intercut with flashbacks to the old days when Blaster was The Voice, effectively a propaganda tool, cheering on the troops in the wake of the Thunderwing disaster, as the Decepticons were making a big final push against the Autobots.  A deeply beloved celebrity and psychological weapon, when someone sneaked aboard his private broadcast suite and took him out, it dealt a blow to repelling the Con advance the Autobots did not recover from.

Well, that’s what Blaster thinks anyway. Frankly there’s no many DJs I can think of where my moral wouldn’t be improved by them being shot in the chest.

Most notably, these flashbacks give us our first glimpse of a very G1 design Getaway, looking appropriately unhappy to be there. Keep an eye out for him, the great friend to all characters.

In the present, Blaster is doing more brooding than investigating, so it’s down to Perceptor to try and crack the case. Helped by a second assassination attempt on Blaster, that lets him narrow the suspects down to people who were nearby both times: Mirage, Beachcomber, Inferno and Bluestreak.

That Bluestreak is the only one of them to have had a speaking role in the issue, being slightly too keep to tell Blaster he’s glad he’s OK,  means the comic seems to be setting him up as the wannabe killer.

Love that Getaway.
Some misdirection rather undone by the next piece of evidence: security camera footage that the attacker somehow scrambled and is supposed to be impossible to make out.

Which is a good moment to talk about Emiliano Santalucia’s art, which is fine but also shows clear signs of being rushed (when we skip around the Autobot forces hearing Blaster is back, Fort Max looks terrifying) and in the moment at the end of this scene, either his art or the writing badly lets down the storytelling. 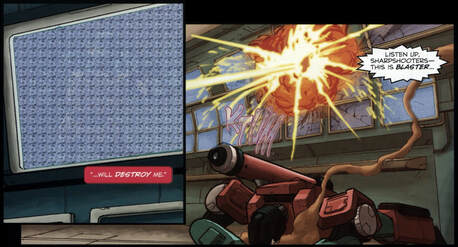 These are not consecutively set panels, despite following on from each other in the same room.
​Because as Blaster is talking about how he’d have trusted all four Autobots with his life and decides he need to learn the whole truth, the next panel is of Perceptor laying in front of the same screens they were just standing besides having been shot in the chest (something he’ll find to be habit forming).

It genuinely took the rest of the page for me to realise that there had been a time jump here, and Perceptor had been attacked when he was alone. Because none of the four suspects were taken into custody till they could be cleared apparently. Or at least watched. Or had their guns taken off them. It’s one of the most badly constructed scene transitions in any Transformers comic.

Also, Perceptor has been shot in the front with his back against the wall, meaning he let one of the four suspects come up to him with a gun.

Blaster has used this time jump to make a triumphant return as The Voice, but as the mystery assassin (who is also just straight up drawn as Beachcomber from behind with no attempt to hide who he is before the reveal, again making me wonder if the script was not conveying itself properly) tries for a third time, it turns out to be a pre-recorded trap as Blaster confronts... 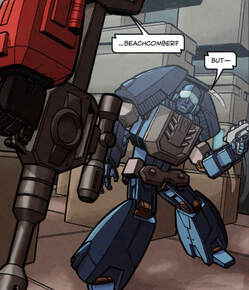 The sort of guy who thinks all TV is live.
​Beachcomber!

What follows is actually the best part of the issue as Furman uses Blaster’s unique skills. First his sonic weapons, then his ability to throw his voice, and finally just the fact he can talk.

Which lets Beachcomber (who also uses his own unique skills as his geo-sensors follow Blaster), reveal he’s under the mental control of Soundwave, who used something new called a “Bombshell” to implant a mind control device in him.

As Blaster’s first death would have been thousands of years ago, I can’t decide if Autobot security is terrible or if Beachcomber is the most inept Manchurian Candidate of all time, completely failing to do anything else in epochs. 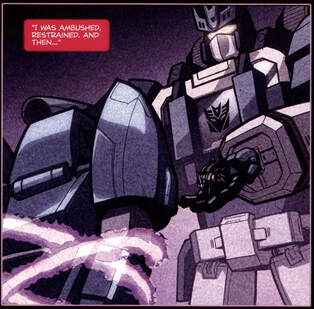 Beachcomber's nightmar. Your kink.
​The talking a mind control victim out of it with “You’re still in there, fight it!” it stuff is a bit clichéd, but it also fits Blaster’s character and it’s nice that, as the comic turns him darker than many people who only know him from the cartoon would expect, that he saves Beachcomber rather than killing him.

The issue ends with the recovered Perceptor revealing Beachcomber will be fine, but Blaster, once he’s taken care of some stuff that needs doing here (what?), will be going after Soundwave (who everyone thinks is dead at this point) and making sure that his own voice is the last the Decepticon will ever hear. 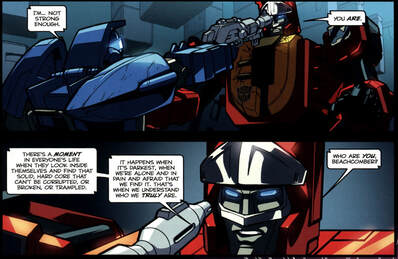 Chris Moyles staging an intervention.
​It’s actually a surprise it never happened even by accident considering a Blaster/Soundwave fight is about the most obvious thing IDW never did, but the two will never even share a scene as more than part of a crowd for the rest of IDW.

And that Blaster is this super inspirational celebrity radio broadcaster who is now dark and miserable will never be mentioned again either, despite that being exactly the sort of things you’d expect James Roberts to make great play of. Especially as it would have let him indulge his "Morrissey only became a bad person the moment his music wasn't as good" fetish by doing an issue called Hang the DJ.

Indeed, for such a well remembered character thanks to his role in the film, Blaster’s basically going to be an extra for the rest of IDW.

Meanwhile, Beachcomber will also fade into obscurity, but will somehow wind up with security work in future years.

And what Bombshell we’re seeing in the flashback here will be retconned to hell and back as well. 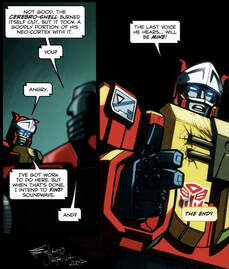 There’s nothing wrong with standalone issues, indeed the best Spotlights so far have only lent into the overall storyline lightly. But this was exactly the wrong moment to do one, and frankly this third run of the series is going to be a bit of a mess as it struggles to do what has been proven to work best and deal with the tumultuous situations around it. Though the next one will certainly be the most infamous for it.

But before that, next week it’s the return of E.J. Su with Devastation issue 5. Plus a look at the Mosaic that makes trying to work out what was going on with Furman much harder than you’d think. 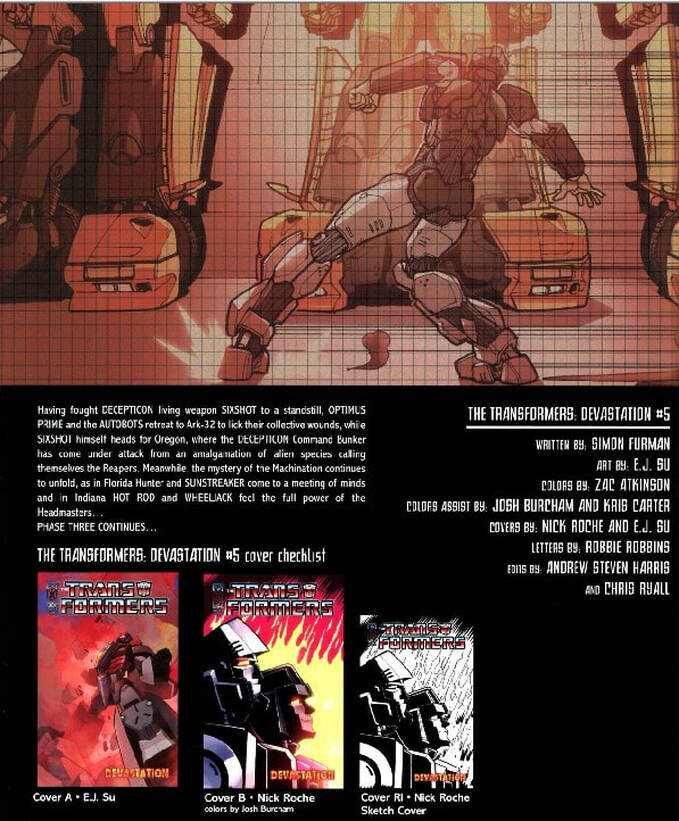