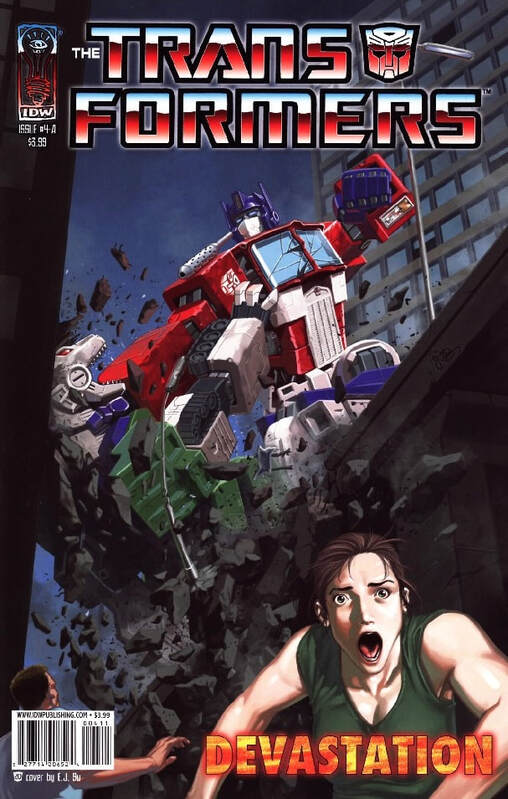 Well, we befriended them... I guess. Look, Sir, I know how this sounds, but there are, um, good robots and bad robots.

And we’re back. Apologies for the break last week, I had some health issues coupled with a long weekend away that made it impossible to catch up. But at least two weeks is not the same as two months, and going into 2008 after a conspicuous gap means just one question: How obviously has this comic been compromised by any rewrites as the forced need to wrap things up comes in?

Well, to deal first with a potential mundane issue for the delay, Robby Musso takes on art duties (fittingly as he’d drawn Sixshot), and whilst it’s not as immediately grabbing as Nick Roche’s (and his humans are rather weak), if there was some reason for it to be a rush job, he does pretty credibly and it generally looks a solid issue.

As for the plot itself, what makes it hard to tell if this is suffering from rewrites or last second changes in plan, is that what was clearly always going to be the heart of the issue is a bit of a disaster.

That is to say, a disproportionate amount of the issue is spent on a fight where Sixshot, a character who is supposed to be able to devastate planets single-handed, repeatedly fires at point-blank range at 8 Autobots and the most he does is knock Bumblebee over. Oh, and in hand to hand combat, he can just about rip Jazz’ arm off. 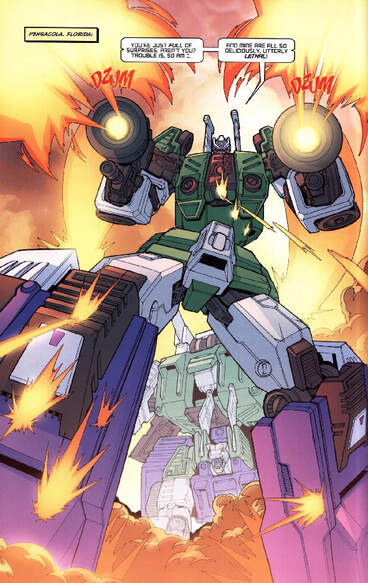 Cock of doom.
​It’s incredibly underwhelming and rather undermines the title of the series that this is just a nothing fight. The previous issue was based around an action sequence that could quite easily have been condensed, but it was hugely well done fun. This, even with the amusement of Sixshot pre-empting The First Avenger (“I can do this all day”) is just dull. Yes, Prime does at least point out that Sixshot is full of bullshit with his boasting about his super compressed metal and regenerating power core, but it’s still not enough to make this feel worth the time.

So, what else do we have? First is a straightforward page of Skywatch losing control of Ravage and Laserbeak, all because of some mysterious jamming signal that turns out to be coming from an old tape deck on the shelf of a teenage boy with a 07 Bumblebee Camero poster on the wall.

Probably the best part of the issue, at just two pages, is between Sixshot and Hunter as the human has to fully commit to the Headmaster process by going into a giant cake mould. There’s some nice gallows humour between the two of them, especially when it comes to the fact the process will actually hurt a lot. But there is definitely a sense of padding here that there needs to be an extra process when previous issues had implied Hunter had been a successful guinea pig for Headmastering and it does not so much progress the plot as just acknowledge it.

Padding is also present with Hot Rod and Wheeljack. Despite the previous issue having shown the Headmasters have a mental link to the Autobots and that the Ironhide lure seemed to be a deliberate trap, they lose the two and the Headmasters have to split up to find out where they’ve gone. 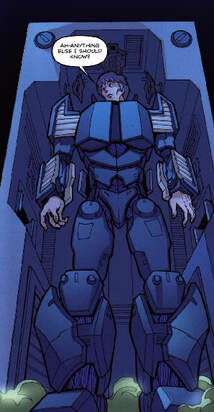 Baking day.
​Giving Hot Rod and Wheeljack a chance to search the Wreck’N’Rule junk yard (as Ironhide is supposedly about to be crushed, why not start at the compactor?), before the alarm they set off as they broke in has the owner call the cops, which the Machination intercept.

That the Ironhide plot is going to be one of the most famous dropped balls of this era makes how this could have moved faster, with the Headmasters just chasing the Autobots right into the junk yard as they rush to Ironhide at the compactor, one of the more bitter pills of the issue.

But if there is any moment that was definitely an awkward replacement for something (and I suspect Senator Holt related) that had to be dropped, it’s when Jimmy (who at one point shouts “Yes! Go Autobots!” like he’s an Armada character) and Verity decide that, because the Transformers are now being filmed for TV news and are “Live at five”, to go and try and convince some random cop creating a roadblock that there are good and evil robots. It’s very silly padding that doesn’t go anywhere and does make you wonder what the timescale is that the police could have arrived and set up said roadblock in the same time it takes Sunstreaker to say “Get in that cake tin” to Hunter.

The humans are at least able to go tell the Autobots that the area is about to be bombed by the USAF, meaning Prime orders everyone but him gets orbital bounced up to his own Ark because... it’s personal between him and Sixshot and he’s going to finish it? 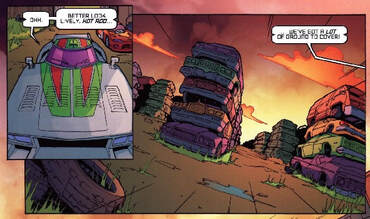 Where can the guy about to be put in the car crusher be?
​This motivation is odd and comes out of nowhere, and when it comes to “I have to do this myself and alone” moments, it’s definitely more Picard at the end of Star Trek: Nemesis than Bond in No Time to Die.

And as they beam up, we get what may be the most unintentionally funny “Dramatic” moment from Furman yet as everyone arrives on the ship, but Jimmy and Verity... are dead!

Because Ratchet forgot orbital bouncing is dangerous for humans (unless you’re Spider-Man).

Now, without wanting to spoil anything, Jimmy and Verity will almost immediately get better from this, something that was fairly obvious at the time. So it’s just a cheap, melodramatic faux cliff-hanger trying to give too much weight to two characters the story has otherwise largely forgotten about. That they’re jaundice green as well, just makes it funnier.

And again, this bit of padding is introduced to a story that is going to not have room to wrap up its multi-issue Ironhide plot properly. 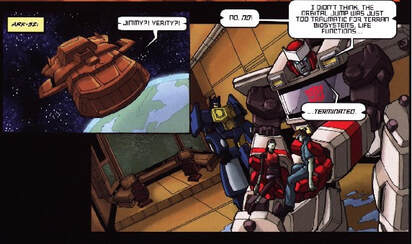 TERMINATED
​Speaking of odd plots to introduce at this point, how is the great Sixshot/Optimus Prime rivalry going? The answer is nowhere, as the main Decepticon base is now under attack from everyone’s favourite recurring Transformers villains, the Reapers, so Megatron calls in Sixshot to help, all previous orders rescinded.

And rather than replying “Give me five seconds to kill Optimus Prime”, Sixshot just leaves, allowing Prime to Orbital Bounce out before the USAF bombing. Which is a similar plot beat to a similarly unsatisfying moment in Furman’s War Within: The Dark Ages, where Trypticon is called back from battle at just the exact moment he was going to win.

At the Decepticon Bunker, the Reapers may be attacking, but one guy is having a great day, as Starscream assures Astrotrain that Sixshot will be easy to deal with and this time “It will be Starscream still standing when the dust settles”.

Which, unexpectedly, is only just behind the Sunstreaker scene as the best part of the issue as Starscream is such a smug cocky bastard. You’ve got to love him. 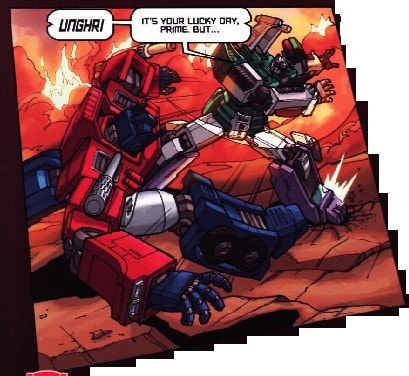 That famous rivalry.
​I still can’t decide how drastic the plot reworking is at this point. There are certainly moments that read like they could be last second replacements for planned scenes, but until Furman feels able to talk honestly (assuming he hasn’t been all along), it will never more than a guess.

But what is not a guess, is that this is a much weaker issue that the two preceding ones, despite being based around the same build the entire thing around one big action scene premise. What worked before, falls leaden here, and it’s not the fault of the different artist. It’s that the big action scene is... silly. And not in a knowing way, everything about the issue feels like you’re meant to be taking this seriously. Which, with moments like Ratchet accidentally “Killing” Jimmy and Verity, is completely impossible.

And that 2008 starts with barely hanging together action scenes that are not as dramatic as the writer clearly thinks is a worrying sign of how things are going to go this year. The Sunstreaker (two pages) and Starscream (one page) moments are by far and away the highlight of a worrying downturn in quality.

Bringing sexy back.
This time the Mosaic backup is Ghost in the Machine, written and drawn by George Smrekar and Eric Allaro. It’s a very dark take on Punch/Counterpunch (every fan has a Puncgh/Counterpunch story in them, making the lack of any official ones all the odder), with the split being the result of a battlefield accident, and, after waking up to find another dead colleague at his feet, it ends with the Autobot preparing an elaborate suicide the next time he changes. It can be read HERE.

Next week, whether better or worse, it’s definitely the most forgotten IDW comic, in Spotlight: Blaster. 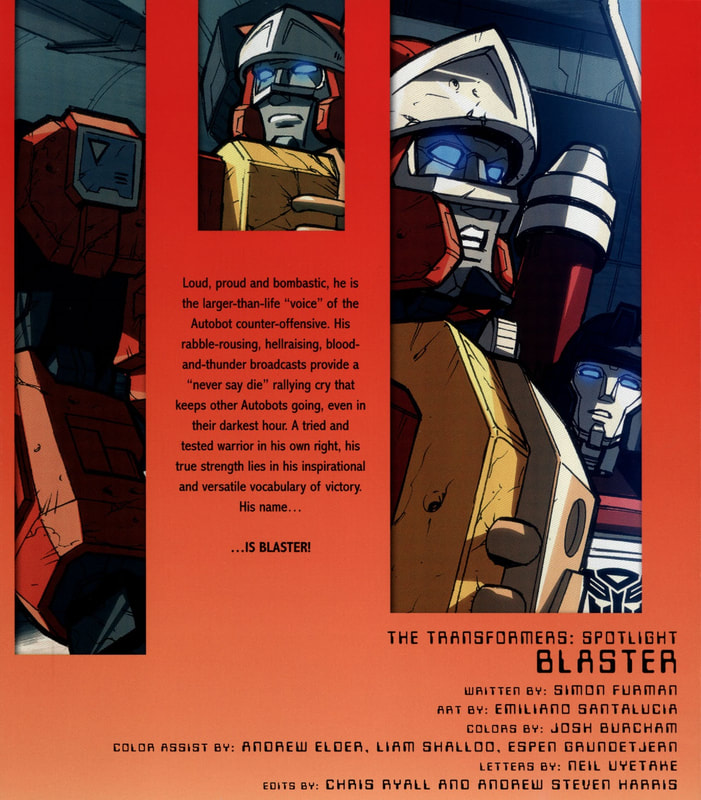