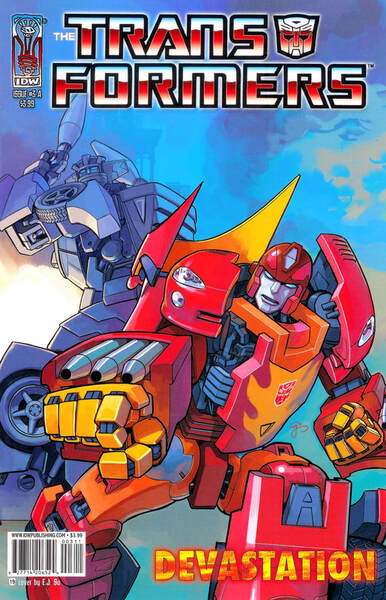 It’s been fun. Better than some anyway. But it’s over.

We have here an issue that shows us pretty hard where artists sit in the pecking order of comics, as E.J. Su takes two parts off for paternity leave (that baby being 14 now). This is only a six issue miniseries and part of a chain of them that is very much sold on the art as much as the writing. And babies don’t suddenly appear out of nowhere, it would have been easy enough to just push the series back a couple of months to let him draw all of it.

It’s fair to say that if Furman had been forced by outside circumstances to miss two issues, they’d have delayed the two issues rather than bringing in a series of fill-in writers to take care of it.

The irony though, is that there is going to be a seven week gap before the next issue (indeed, this is the last G1 comic of 2007, that sort of gap without any sort of reboot or relaunch involved is going to be very rare), meaning they could have just paused the series to let Su have his time off with no real impact on the release schedule.

Now, why there is such a big gap between issues even with other artists standing in is one of those tantalising mysteries we’ll probably never not get solved until after IDW are done with Transformers and people who otherwise might be depending on them for work can be more honest. But that it roughly coincides with the beginning of promotion for All Hail Megatron feels like it is extremely telling. Is this the point Furman was made aware he was not going to see his plans through to fruition and the delay is down to heavy reworking of plots? 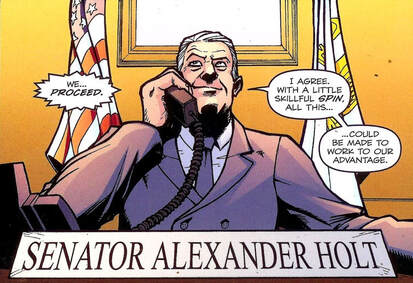 Holt, about to do a bolt.
​Possibly. As long term readers can tell, I’ve gone back and forth on when and if Furman had to chuck out his original ideas. Largely because it seems to be a hard to work out mess, with the Mosaic I’ll be talking about in a few entries being the main fly in the ointment.

One hint is that the issue opens with something I was wondering about when it was so mercilessly taken the piss out of in Ramjet, a page about the facsimiles plot, as a Pentagon meeting about the weird shit going down in Alabama is interrupted by Senator Holt phoning in to talk to one of his fellow doubles and agree that all this can be turned to their advantage.

Which, now I’ve double-checked on the Wiki, is definitely the last time this plot is mentioned. Backing up the idea that this is the point things changed behind the scenes. 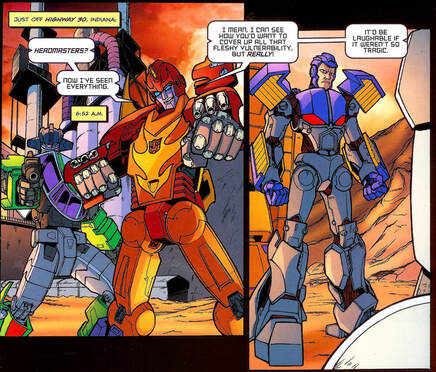 The difference between Su and Roche is Nick would fuck Hot Rod.
​All that said, on the issue itself, even with the reasons for Su not being prioritised on art, you know you’re in for good stuff when Nick Roche steps in and this is an extremely gorgeous issue that sensibly does not try to ape Su, but instead puts a uniquely Roche spin on the visuals (Hot Rod especially is suddenly leaner and sleeker). It’s probably a bit of a jarring shift in the trade, but this is extemporary craftsmanship that you cannot complain about.

And the art is key here because this is another action packed issue, effectively being just three scenes, one being a big chase and two smaller cutaways, only one of which is especially talky.

So, to deal with the two smaller scenes in the middle of the issue first...

In Indiana, Hot Rod cannot stop himself laughing at the idea of Headmasters, mocking the human for wanting to look better than flesh and how the guy will never be more than a Sunstreaker lookalike.

But then, it’ll turn out he does not trust organics in hats.

The Headmaster does try to counter by proving he knows the names of the two Autobots and has access to everything Sunstreaker knows about them. 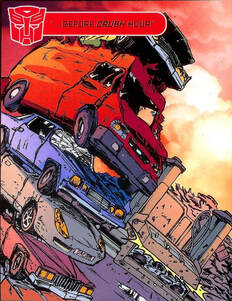 And imagine how the artists who actually worked for dreamwave feel.
​Leading to a wonderful moment of Hot Rod pointing out Sunstreaker is a lazy bugger when it comes to reading memos so the human probably doesn’t know about Wheeljack’s fancy new invention: The Gyro Inhibitor Shell. Which Wheeljack is more than happy to show off, causing enough of a distraction to let them escape and try to get to Ironhide in the remaining 50 minutes till crunch time.

Readers of later IDW will find it hilarious that Hot Rod reads memos, but there’s also a joke looking backwards to the infamous antics of Pat Lee as we see a badly battered Ironhide in the waiting to be crushed zone, on top of a Porsche with the registration plate “Dream”.

In Tampa, the talky part of the issue is between Hunter and Sunstreaker. Some of this is unfortunately funny for the wrong reasons, as the comic goes out of its way to cutaway to another room before Sunstreaker can name who the other big giant head is. Which at this point firmly puts that plot into the surprise baddy everyone has already guessed territory of Star Trek Into Darkness and SPECTRE. 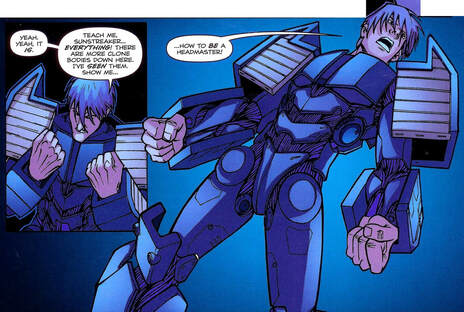 "As long as you've read all the memos we'll be fine!"
​Which is a shame, as the rest of the scene is actually quite good, as Sunstreaker just wants to die rather than be used to hurt other Autobots (an act of nobility in contrast to how Hot Rod viewed him a few pages before). But Hunter is not a killer and wants a third way, deciding it’s time Sunstreaker taught him how to be a Headmaster.

Though later issues will slightly ruin it by revealing Sunstreaker views this sequence very differently (if you want to be charitable and not call it a retcon), as the main emotional and character beat driven part of the issue, it’s very effective and probably the best Hunter moment so far, which is impressive considering it could so easily have been very cheesy.

But who cares about character and emotion, I want action. And the big envelope around these sequences is big A action. As Ratchet first blows up their escape pod (in a lovely full page from Roche) and heads on a cross-country North by North-West inspired chase towards where Ark-19 went down, being pursued by Sixshot, but luckily as he arrives at the crash site, the other Autobots emerge from the water to help out. 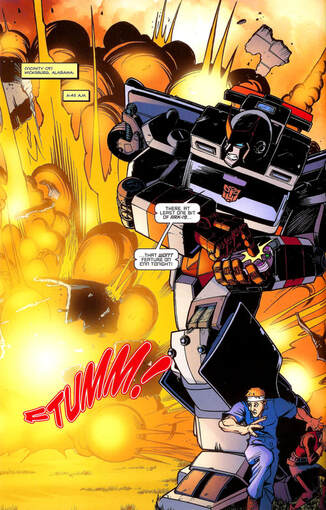 I've not mentioned Ratchet's head being the wrong colour as that was fixed for trade.
​Now, the length of this sequence is largely unnecessary. You could have opened the issue with Ratchet and the humans coming out of the escape pod at the point the ship when down, with the Autobots coming out of the wreckage at the same time, all together and ready to face Sixshot from the off. The only (intended) bit of plot forwarding in the chase is the K-IDW camera crew from Infiltration finally get their conclusive footage of Transformers, meaning the aliens are now blown to the public. But this will never really go anywhere, probably for the same reason as the Holt stuff.

You can also say that it undermines the threat of Sixshot to have him making such a tough time of it to kill one Autobot who isn’t fighting back when he’s supposed to be able to wreck planets singlehandedly.

But, it’s just such great gleeful fun. My favourite part being when Ratchet tries to hide amongst some parked ambulances, only for Sixshot to simply blow up each one in turn. But the entire chase looks great, has some nice gags (like Ratchet admitting he has no plan but to run away) and the emergence of the Autobots is a great punch the air moment. It’s Furman writing to let the artists show off, and whilst it may not have been the artist he was expecting (certainly Ratchet transforming and pulling his gun out was clearly inspired by the good work Su did on a similar sequence with Jazz in Escalation), Roche comes in and knocks it out the park just as much as Su would, but in very much his own style.

Which makes it a shame the end of the issue is a threat in every sense, as the cliff-hanger is two of the external threats coming to Earth, one the Reapers and the other a rather surprised looking Galvatron, sent there by... Nemesis Prime! 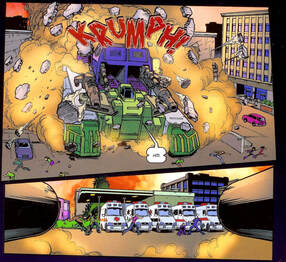 Ratcheting up the tension.
​Least it will be fun to see Galvatron again. Though even beyond their just being rubbish, with two planet threatening dangers either on or heading to Earth in Sixshot and Galvatron, did the series really need a third?

This continues Devastation subverting my memory of this being where it went wrong with another incredibly strong, action packed issue. It’s puzzling the year ends here in November, but as a send off for 2007, it could not have done better.

The original issue also contained the Beachcomber centric Mosaic, Reason by Josh van Reyk and Shaun Knowler (with the lad Kris Carter on colours again), where the Minibot talks about how he fights so no one else will ever have, and is a rather sweet little piece that can be read HERE. 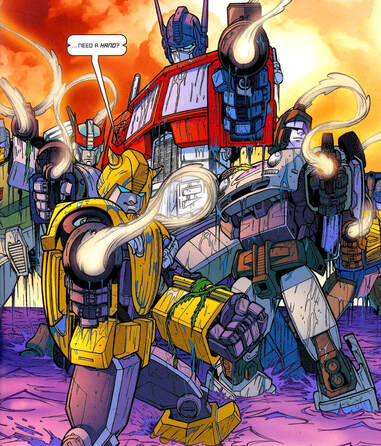 "We were waiting for the dramatically right moment to reappear"
2007 as a whole has been a strange year. Furman really seems to have found his footing, but the two main miniseries he didn’t write were both, broadly speaking, terrible. With it being left to the Spotlights to show (even with the irony of one of the two non-Furman ones also being by the same writer as one of the terrible miniseries) that Transformers comics can have a future without Furman.

Because that future, and trying to let go of the past, is going be a key and important struggle in 2008. Not one that is going to have easy answers.

And you won’t have to wait seven weeks to see how that goes as next Friday the new year kicks off with Devastation issue 4. 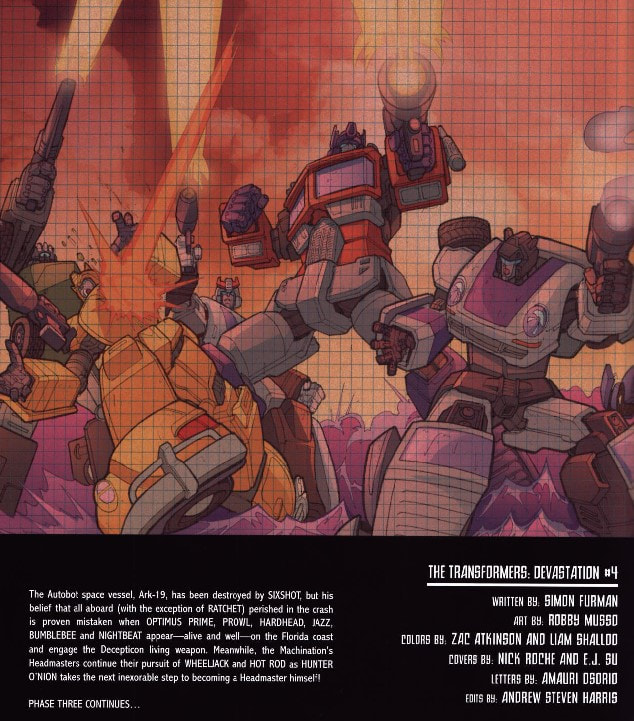