Well it’s no Big Sin to Stick Your two Cents in, if You Know When to Leave it Alone, but You Went Over the Line, You Couldn’t see it was Time to go Home. 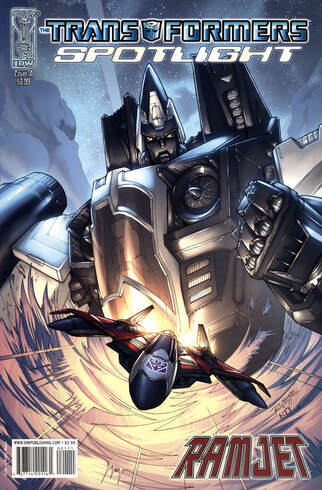 It’s fair to say absolutely no one expecting much from this one, by the author of the utterly abysmal Transformers/New Avengers and all about a character from that crossover who had come across as a mediocre Starscream knock-off. The best you might have hoped for is some solid Robby Musso art.

But perhaps Stuart Moore really did have to do a rush job on that comic, or the outside constraints of two publishers was too rough on him. Because against all odds, he does something that is not only very good, but very prescient of the future direction of IDW.

At least once you get past the ever so slightly too small lettering that makes it a bit of a strain to read.

What makes this a trend setter is that it is IDW’s first all out unashamed comedy issue. Which is where Ramjet feeling like a poor stand in for Starscream in the previous comic works to its advantage, as this is basically a send up of the traitorous second in command and his increasingly unlikely plots to usurp power over the years. To the point I genuinely suspect Moore’s original idea was indeed to do all this with Starscream (and possibly a less lethal outcome) before making it fit in with the overall IDW continuity meant a proxy. 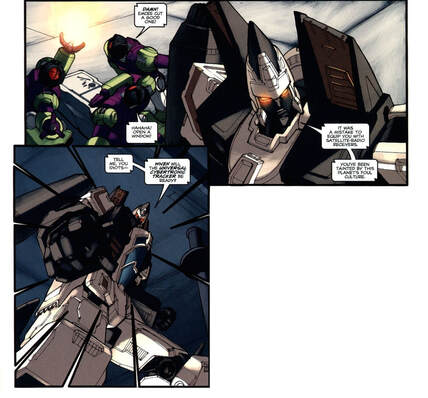 Love the little guys.
​And said proxy is one of those curious characters that exist in a strange Transformers limbo, where they’re from the first two years and therefore “Classic” characters, but have never actually done very much. Ramjet, up till now, having been mostly known as a guy who rams his jet into things. Making him an inspired choice for this, as the idea of this brutal thug thinking he’s a Machiavelli mastermind is in and of itself very funny from the off.

Not that the comic tips its hand immediately, instead playing a fun game of making it look like this is going to be a serious story before nudging it further and further into the ludicrous.

So we open (with a time stamp that runs throughout the issue and reveals it lasts just a little less than two hours) as Ramjet clandestinely meets with Skywarp in mid-air, to try and turn him to his side in a coup against Megatron, having first made sure to get him to STFU when he tries to mention The New Avengers crossover.

Skywarp needs some persuading, especially after what has recently happened to the actual Starscream, and Ramjet starts to explain himself in what seems a reasonable way by the standards of treacherous Decepticon stories, pointing out Megatron is isolated and vulnerable.

But then, using Skywarp’s teleporting powers as an example, he goes off the deep-end and starts talking about the interconnectivity of all things and his genius for non-linear thinking.

Absolutely nothing of his plans we see this issue are non-linear. 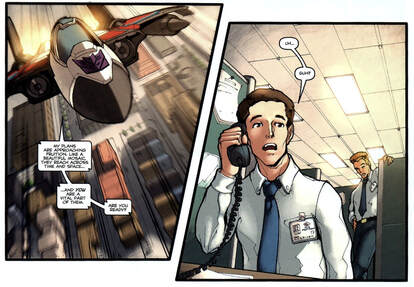 That font size gets the same reaction from me.
​Skywarp’s response to all this is, in what I think is the first instance of a swearing Transformer, to call it “Crap”. But, he’ll at least give Ramjet “One solar cycle” to show something of value in his plotting, but also advises the conehead to remember the old Cybertronain saying, “Always bet on the leader”.

Which brings us into the mastermind’s masterplan as it turns out Ramjet has more plots on the go than the average season villain in 24. Starting with going to his secret mountain base and checking on the work of his creations, the Mini-Constructicons. Human size green and purple dudes who are adorable, talking in Noughties TV slang and deeply frustrating Ramjet and making him regret he let them see Earth culture in the first place (surely a dig at Jazz in the first film?).

They are good for one thing though, building a Universal Cybertronic Tracker. Which, setting the form for the rest of the issue, has him gloating and wondering if Megatron has any idea what’s coming for him, whilst we cut to Megatron going through the events of Escalation without  a single thought for Ramjet (here, deciding to break protocol and stay on the planet).

Phase 2: At the Pentagon, a facsimile construct called Harrison is ordered (via phone), to bring the nuclear launch codes he has access to a predetermined location. Wonderfully, Ramjet greets him with “My plans are approaching fruition like a beautiful mosaic, the reach across time and space and you are a vital part of them. Are you ready?”, and only gets the reply “Uh... guh?”, because Harrison is a dribbling, drooling idiot who only gets away with it because his colleagues think he went to Hollywood University (presumably a joke that lands if you’ve ever worked with a graduate from there). 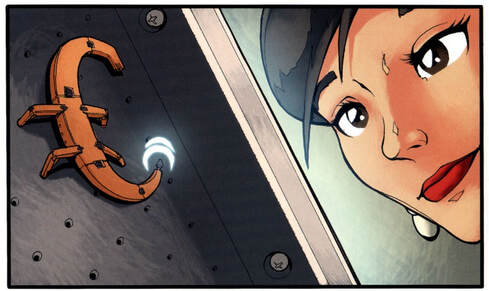 Coming for Farage like.
​Now, it is careful to point out that Harrison is both made of substandard material compared to the replacements the other Decepticons have made and that he’s near the end of his life cycle. But I’m still surprised editorial let what is basically an extreme piss-take of one of the current plots in the main book get through.

Though perhaps it rather reflects what editorial thought of some of the plots in the main series by this point. Certainly I’m not 100% sure if Furman will ever actually mention his replacement of US government officials again after this point.

A more subtle pisstake comes via Kris Carter, who did some uncredited assistance on colouring for this segment of the issue and based the interior of the Pentagon on the bank call centre he was working in at the time.

Because one is a nefarious evil overreaching organisation where the staff become grunting zombies, and the other is the Pentagon.

Can’t believe that no one ever lets me write a comedy comic.

As Ramjet wonders what Megatron will think of his ability to destroy America, we see Megatron in Brasnya preparing to destroy the world. 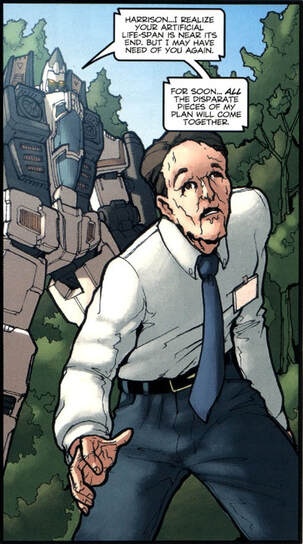 This gets more of a payoff than the serious Furman version will.
​Phase 3 is a trip to Europe and an alternate energy research facility, where Ramjet drops a series of fliers promising the chance to win €50,000. Apparently no one working there finds an F-15 dropping prize draw fliers on them odd, so they each grab one before going into work. At which point, to the great fear of your grandad, the € on each flier reveals itself to be a little robot, crawling away and getting into their computer systems. Meaning Ramjet will now know when they develop a substance that can be converted into Energon! What do you think of that, Megatron? Oh, he’s too busy blasting Optimus Prime to answer.

Back at his secret base, the Emcees have completed their task, but they make the mistake of asking Ramjet if they’ll definitively be taken to the top of the food chain with him, causing him to simply kill two of them to teach the third a lesson about knowing his place.

Near the Pentagon, Ramjet meets Harrison and gets the codes, telling the FC he must return to work and await future orders.

Harrison’s face is melting off at this point, so it’s probably for the best he crashes his car and dies. But this does not deter Ramjet as he lays out his full masterplan to himself, out loud, in a masterful full page spread showing his imaginings of how his schemes will work.

So the tracker will let him know where all Autobots and Decepticons are, the synthetic Energon will let him force the other Decepticons to join him and his latest idea of “Micro-Constructicons” will, when injected (somehow) into the blood of every human on the planet, allow him to control the entire population. It’s probably lucky he gets interrupted by the aforementioned car crash before he can explain how a “Superstring spacebridge” will help him go on to control the Universe. 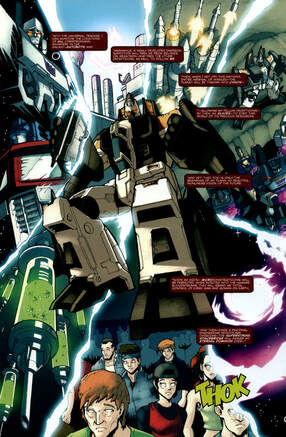 Shockwave: *makes furious notes*
​It is especially funny that (alongside cartoon Sparkplug), his imagined controlled humans include Jimmy, Verity and Hunter, confirming that even his imagination doesn’t extend to giving Jimmy and Verity new clothes.

What’s funny in retrospect is how much this predicts the sort of plotting that IDW villains we’re supposed to take seriously will attempt (I’m looking at you Shockwave), with the bit about the spacebridge especially being years ahead of its time. As is the ability to detect individual Transformers by faction come to that.

It’s all for nowt though as Ramjet decides to test the detector by asking it where Megatron is, the answer being right behind him in a glorious moment of pure slapstick. The conehead tries to make a Starscream style fight out of it with some verbal bitch slapping, but Megatron just simply kills him.

And then throws the body parts around all the places Ramjet has been that day. With a nice little final bit of satisfaction for the surviving Mini-Constructicon as he simply calls being gifted Ramjet’s torso and one leg “Harsh”. Which will be the last we’ll see of that little guy for many a year till John Barber reaches him on his continuity checklist.

But Megatron has made sure to keep the head as a memento, and frankly has never looked happier than when playing with it on the last page as Skywarp (who immediately turned tattle-tale on Ramjet because you do indeed always bet on the leader) looks on. 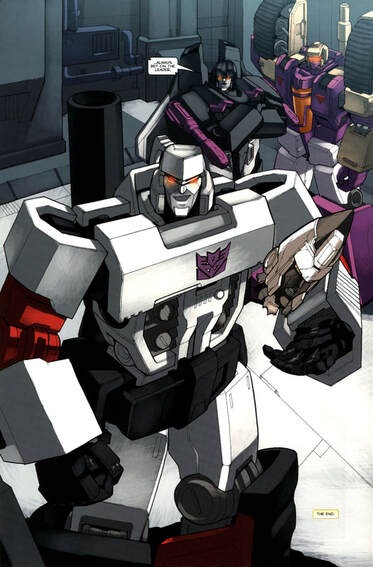 The way to get ahead.
Now that was just a very funny comic, helped by Starscream being enough of a generic character type (he has his own TV trope named after him) that it goes beyond being a simple spoof of an overused G1 cartoon plot to being an affectionate send up of an entire genre. With the perfectly timed increasing ludicrousness of Ramjet’s plots being the main highlight.

It is also far more like the style of what came to be seen as “Classic” IDW that anything we’ve had yet, even more so than Spotlight: Kup. And it will be quite a few years before this self-aware humorous postmodern approach will become a standard, making it rather overlooked as a trendsetter.

I do appreciate there are fans that don’t like a “significant” character from those from those first two years being introduced and immediately killed (we don’t talk about New Avengers out loud), but the story is much stronger from his hubris being slapped down far harder than Starscream’s ever will be precisely because he’s not the major player he thinks he is, but a bit part.

My only real complaint is that there’s no way all the events in Escalation covered here happened in less than two hours. And the only thing I was right about going in the first time is Robby Musso does some fantastic art.

Next week, we end 2007 with some more fantastic art as Nick Roche steps into E.J. Su’s shoes (and be sure to check out Nick’s fantastic creator owned book Scarenthood. Out now in trade) for the third part of Devastation. 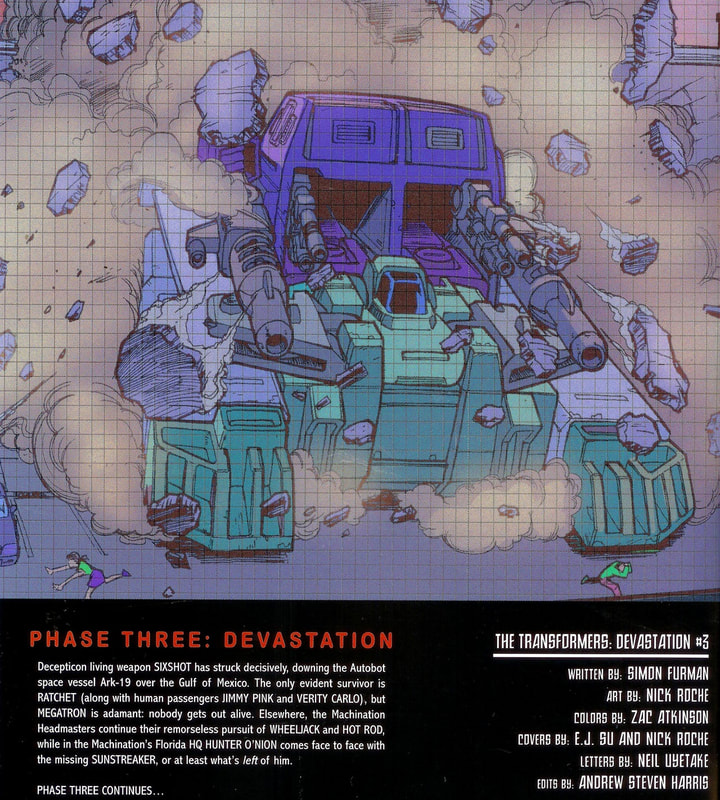