Well I’m Living Here in Allentown, and it’s Hard to Keep a Good Man Down, but I Won’t be Getting up Today. 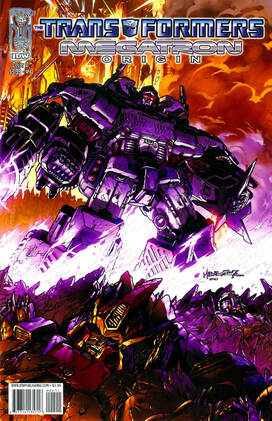 Stick to the plan? I’ll give that cretin a plan.

If anything sums up the oddness of this series, it’s the opening scene of a character giving an impassioned, angry speech laying out the Decepticon cause to Senate before killing them for crimes against Cybertron.

Stuff like “Through your own interests you created this. You brought us here. You didn’t just make it possible—you made it happen. All we did was give it a badge”.

The most powerfully written and overt statement of intent in the whole series, and naturally in this book called Megatron Origin that speech goes to... Starscream.

Though that it starts with him being read his list of crimes by the senate (well, technically the Kaon Council, later issues clarify it was the whole government in probably the smoothest retcon in the whole issue, especially considering Straxus is there when we’re soon going to learn he can’t be), only to be met with a shrug and a “Heh, nobody’s perfect” is actually genuinely quite funny. 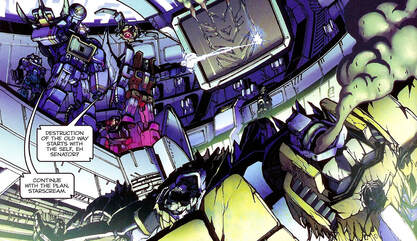 Amazingly they will never be able to prove Starscream did this.
​The execution sequence is very odd though, Soundwave (who was let go last issue, but I’m not sure how that explains him being able to walk into a senate meeting as well) is blocking the lead senator’s call to security, but everyone is being violently shot and the room defaced in the aftermath for the hell of it (including burning a big Decepticon logo into a monitor). Did no one outside here that? “Hey, don’t that sound like the senate being ‘oribbly murdered behind this ‘ere door?” “You know the rules mate, they’re only being ‘oribbly murdered if the senator calls us to tell us ‘e is bein’ ‘orribly murdered”.

Oddly, after giving that big speech and having previously seemingly genuinely been a big fan, Starscream calls Megatron a “Cretin” when Soundwave says they need to stick to the plan. Which is kind of weird, as in the rest of the issue he goes back to being seemingly genuine and if this was meant to be a mask slipping moment, it’s odd he’d let it slip in front of Soundwave when he’s otherwise playing an acolyte to the hilt.

He also does follow the plan perfectly, going to blast Megatron out of jail. Just before this, as the guards notice the comms are down, Mister “Huh” suddenly comes out with a poetic lengthy speech, starting with “Oh destiny, how it pleases you to caress a few and molest others”. Where the hell has this guy been hiding up till now? It’s welcome he’s now aiming for a personality that might actually get halfway to inspiring leadership, but it’s a totally different character and too little too late. 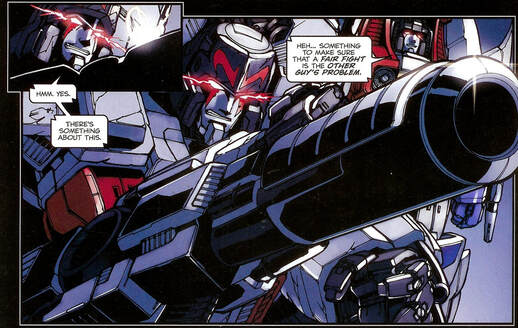 Oh he cried when he meets his BFF.
​But then, what is Megatron’s real character if not having a big gun, which he gets presented to him by Starscream as a present to make up for how right side is his weak on.

And boy could a lot be written about Starscream giving Megatron a big gun.

And after Megatron decides to release everyone regardless of whether they came in with him so he’ll have lot of people who’ll owe their freedom to him, the big fight for Kaon begins, which takes up most of the rest of the issue and is unfortunately a messy, ugly (especially the dull surprise on Grapple and Inferno as a flying pleasure ship—with more women aboard—crashes down above them) let-down with confusing art and poor continuity. Notably, Trailbreaker and Hound both die despite having already appeared in stories set after this. 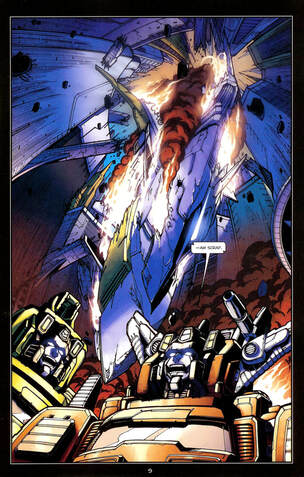 They're shocked this is the most IDW will ever give them.
​Honestly the best bit is Thundercracker showing some hesitation to attack civilians, an actual character beat (from his original profile no less) that will run for years.

There’s also a smaller but telling disconnect as several characters say “Primus”, something Furman had actively avoided as he at least wanted some ambiguity over Primus and Unicron, so he had to take to his blog to say that just because the exclamation exists, the characters as we know them might not necessarily be part of the IDWverse.

Not that it will matter in the end.

Amidst all this, we find out Ratbat is packing up and moving to Iacon, after first killing a couple of city state archive guards so he can download all the...well, archives to a data cube before he runs for it. He does however take the time to explain to Soundwave that he was in fact the one responsible for the mines being automated in the first place, meaning this was all his fault and giving Ratbat a major role in the start of the war and the creation of Megatron that is never going to be referenced again.

Of slightly more lasting consequence is how he gets hoist by his own petard as Soundwave (who will be given far more motivation for doing this by John Barber) shoots him and then, because resources are scarce in war, puts his spark into a cassette.

Only plays Bat out of Hell.
​Wait, is that what happened to Rumble and Frenzy (and as we see them here, Ravage and Laserbeak) when they were “Adapted” as mentioned last issue? No wonder they weren’t keen.

I think this is aiming for horrific, and maybe even satisfyingly so after Ratbat has been so slimy up till now, but it’s hard not to find being turned into a cassette more funny than shocking.

Back at the battle, the gist is Sentinel Prime deciding he needs more muscle and fighting his way to the Apex armoury to suit up in a ridiculously large battle mecha.

With all the upscaling he does, you’d almost think there was really just a little tiny guy underneath it all. 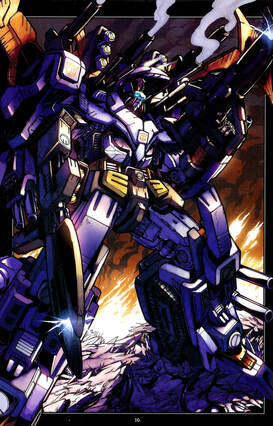 Loves his big boy suits.
​Still, he towers over Megatron, and this is the point you’d expect there to be a huge, epic, fight to the death and where Megatron’s fusion canon will play the decisive role after such a fuss was made of him having gotten it.

Instead, they mainly pose and chat. Yes, now Megatron wants to talk at length, coming out with zingers like “I will create desolation and call it peace!” whilst Sentinel gets bitchy with “If you want to change things so much Megatron—why don’t you start with yourself?”.

As Sentinel looks to be winning the actual fight, Megatron turns the tide, not with his fusion canon. But a poke.

Yes, he jabs Sentinel in the neck (just as he’s about to coin the term “Decepticon”, luckily, he’s stopped as continuity with future stories is already a mess) and that is apparently enough to take out a massive super-suit, letting him throw Prime in a hole and then, finally shoot him. Though as Sentinel survives that and gets to throw out some “Others will come” bravado, turns out Megatron can do as much with his finger as he can with his big weapon. Something he is apparently going to prove as he and the boy move in to make a message out of what is left of Sentinel.

"JODO CHOP"
​As the Prowl led Autobots prepare to regroup, Sentinel Prime is dropped from a great height upon them by Skywarp. And boy does he look dead when they surround the body. Grey and with a massive hole in him. That Milne and Holmes claimed he in fact survived was met by much laughter from the fandom at the time.

We weren’t laughing in the end though.

Whatever his status (and Prowl does refuse to straight up answer the question about whether Sentinel is alive or not), it’s enough of a shock for Prowl to call a retreat and leave Kaon to the Decepticons.

Allowing Megatron to invent manspreading as he sits on a massive thrown and tells Soundwave that for his next move, he has a few ideas... 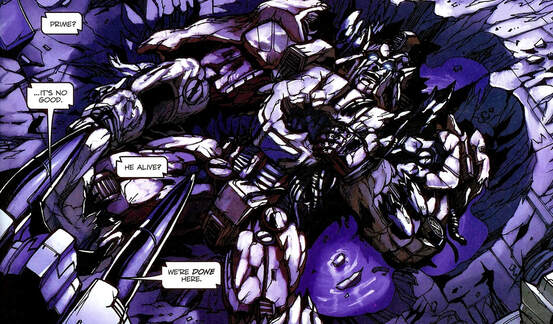 Should have gone for the head.
​Which will turn out in later comics to be mainly just sitting there as the war will not actually wind up starting properly till some time and one Prime (and a whole other Senate. That Starscream somehow manages to join) after.

Which sort of sums up what Megatron Origin is, a foundational key part of the IDW backstory to the war and the characters that every other story dealing with this territory is both beholden to and does not want any part of. Frankly, things would probably have been a lot smoother going forward if it had just been ignored entirely (and there are points where it will feel like that was the choice being made before John Barber took over), and if the writer’s using it as a springboard don’t think much of it, what chance the reader?

The good stuff here remains Starscream despite that one odd moment. Holmes seems to write him with humour that any of the other rather dour characters and that makes a big difference. He also writes Starscream talking politics so well later writers will forget he was just some thug Soundwave found and not a politician all along. 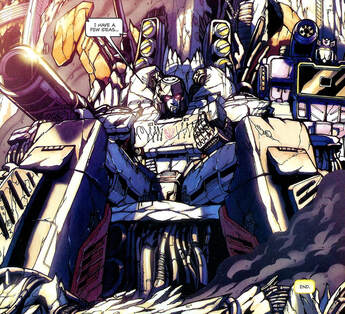 "I'll just sit here till the Senate and Prime are back in place and then I have to start all over"
But what should be a key moment, the first Autobot/Decepticon battle, is just ugly and hard to follow and even with the complete change in how he’s written, Megatron is still a nothing, an empty black hole at the heart of the series that makes the entire exercise pointless. Other writers will do Actual Megatron Origin much better as we go along.

The fact the issue doesn’t even fit into the continuity of the comics already published only adds to the sense that everyone had kind of given up on this one by the end, and it’s probably a good thing that Holmes never wrote for IDW again.

Or is it? As next week we get an unexpected writer redemption story in Spotlight: Ramjet. 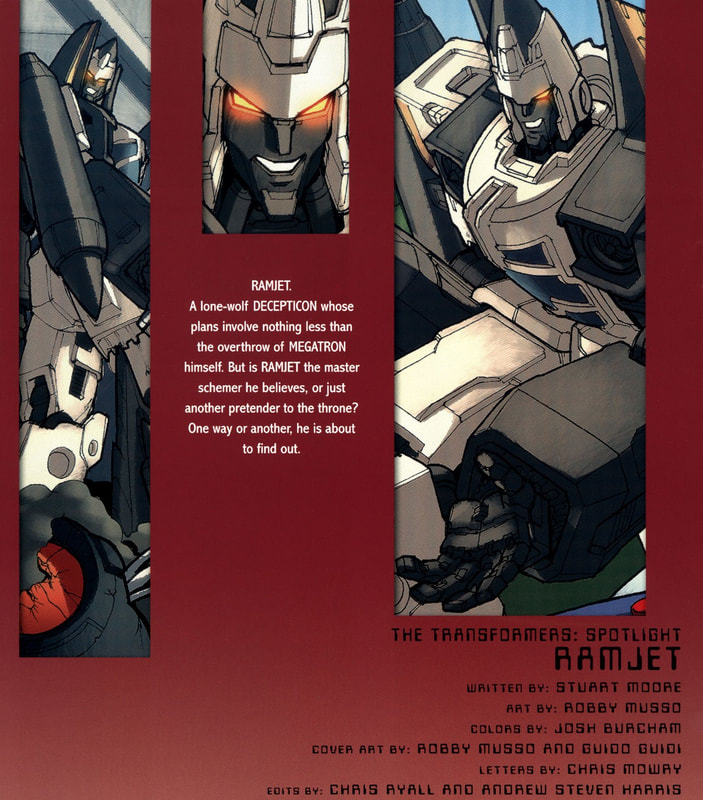