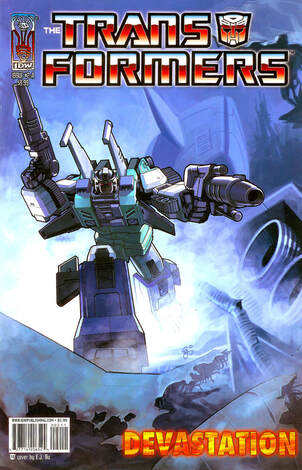 I was initially worried from the opening scene that this second issue was going to have the same disjointed nature as the first as it flashes back to a conversation between Hot Rod and Doubledealer over the SPACE telephone, with Dealer trying to gaslight the true Autobot into getting him transferred to Earth by unsubtly reminding him that they have a history.

It may, again, be down to changing plans ahead (we’re actually not that far from the first teasing adverts for All Hail Megatron, with the formal announcement following in January, which again makes me wonder what the levels of communication was between Furman and the IDW big boys), but this is a largely irrelevant sequence that not only won’t come up again in this series, but doesn’t really connect to how Doubledealer and Hot Rod will meet up again anyway.

Though after this is out the way, we’re into what is basically a full on chase issue that doesn’t pause for breath. Starting with Hot Rod, in the present, having to be reminded by Wheeljack that he needs a driver for the humans. And because his later avatar is the more famous one (I’ve certainly got one reader who cosplayed it), I wasn’t quite ready for him to assume the form of what can only be described as a sex offender yuppie. 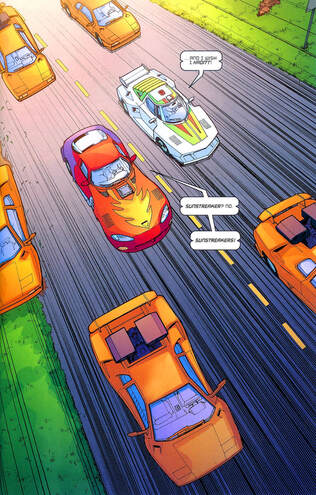 "I'm seeing double, now there are 10 Sunstreakers"
​Luckily he doesn’t have time to get out his Filofax, as they are suddenly surrounded by Sunstreakers. Plural, five exact copies of their old friend (I say, loosely considering Wheeljack isn’t completely sure one of these cars that tries to kill them isn’t the real Sunstreaker) that include the weapons, with a cross-highway battle ensuing.

Up above, as Ark 19 falls from the sky, we get to see my favourite Optimus Prime, the take charge take no nonsense straight down the line version as he simply and effectively throws out orders, quickly using thrusters to have the ship narrowly miss the town (in a fantastic double page spread) and head to the nearest coastline, where the Ark can splash down before the autodestruct is activated. He even finds time to get Ratchet and the humans into an escape pod. All whilst human authorities can now detect them and are scrambling jets to respond.

After how broken up the last issue was, one big sustained action scene is very welcome and whilst it’s very simple to describe, it’s also great fun and visually stunning.

There are a couple of odd bits though. I’m not sure why Ratchet is manning an engineering console. Between that and having to do secretarial work in previous issues, it seems Cybertronian doctors are as poorly treated as NHS ones. Also, Sixshot, a guy with planet destroying levels of energy, only fires the once and then just watches the rest of the Ark’s journey. If he’d just kept blasting, or at least checked the wreck after it crashed, the rest of IDW would be very different. 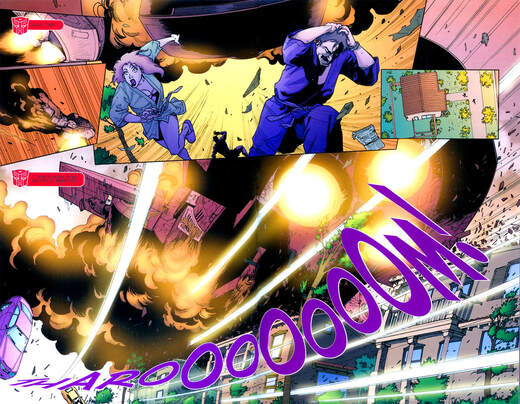 They're actually running to see the car from the much loved Transformers (2007) film.
​It’s also amusing with all the horror and disbelief at being compromised last issue, Decepticon knowledge of the Autobots operation on Earth extends to the number of the Ark they have parked there.

At the Decepticon base, rather than telling him to make sure Optimus Prime is dead, Megatron orders Sixshot to chase the escape pod down.

We also get a fantastic, funny moment of Blitzwing trying to be sneaky by going “Psst” at Astrotrain when trying to tell him Starscream is awake. I am loving the useless goon troopers on this team.

At Machination headquarters in Tampa, Hunter (wearing what looks like a rib crushing metal suit), is being examined by a doctor and Mr Dante, with the former assuring the later that the boy is just a blank mental slate now, who can be used for their own devices. Though as soon as they’re out the door, his eyes move, so American healthcare really is poor.

Back on the road, Hot Rod and Wheeljack decide they don’t really like Sunstreaker that much, and start taking more aggressive countermeasures, taking out two of the pursuing cars. But they’re left with the unnerving feeling the vehicles know what they’re thinking and are anticipating their every move. 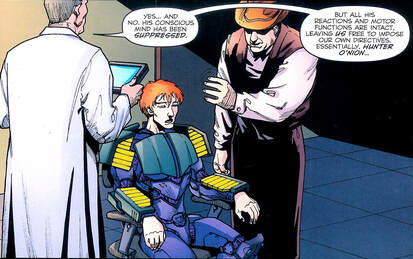 Key workers like doctors are heroes.
​Oddly, this idea that there is some sort of mental link between the headmasters and some sort of Autobot hive mind will come to play a part in the later stages of All Hail Megatron.

This makes Wheeljack decide to test if these are just simple drones by seeing how they react to robot modes. And I think what happens next is meant to be a surprise as we saw a Machination Breaking Bad style camper earlier with the implication it was controlling the cars.

But, I think to readers who have been paying attention, it’s not such a twist that one Sunstreaker becomes a robot, takes off his head (with evil red eyes), which then becomes a human in the same armour as Hunter, who then declares they are the Headmasters, the future and the Transformers are obsolete.

Which is bold talk considering two of his colleagues are dead already in a battle the Autobots were holding back on for most of. Unless he means having evil red glowing eyes for tits is the future. 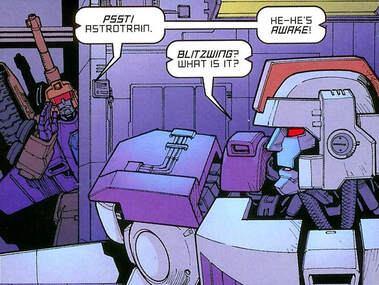 The most terrifying villains in the galaxy.
​Though I suspect it’s intentional that it feels the Totally Un-guessable Mystery Villain has done the equivalent of an Elisabeth Holmes when it comes to bullshitting people with crap, and it remains Furman’s best update of a gimmick.

Speaking of the Machination not being all that, Hunter apparently has the run of their top security base, thinking about how he used what is basically the same technique as Hans Zarkov in Flash Gordon to avoid the mind-wipe, fill your head with nonsense.

And knowing Hunter, he probably was directly inspired by Flash Gordon.

But it turns out someone is more of a fan of the director’s cut of Alien when it comes to taking inspiration from films on how to get along in life, as he enters a room and comes across Sunstreaker’s original head, hanging from wires and in extreme pain and begging to be killed. 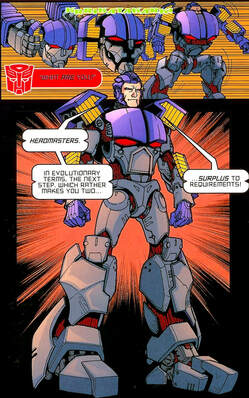 Whoa red tiddy (wham a bam).
​Which is one of the great visuals of the era and a fantastic cliff-hanger.

There hasn’t actually been much more to say about this issue than there was for the last New Avengers crossover, it’s basically two big action scenes with very little side action.

But unlike that poor misjudged comic, this rattles along with no sense of shame and is just hugely enjoyable. After the rough opening issue, this is Furman nearly entirely free of pretentions and just having a blast. And between all the well done action beats, he still finds time for nice and unfussy character beats.

And, just before he heads off on paternity leave, E.J. Su is just knocking it out the park, with only his decision to give Nightbeat teeth feeling a bit off. Otherwise, this is an artist at his peak having as much of a blast as the writer.

Though it is amusing that on the double page splash he has a newspaper covering “Project Iceman” and Movie Bumblebee getting thrown about by the near miss of the Ark. Both of which feel like nods from before anyone realised how successful the film was going to be. 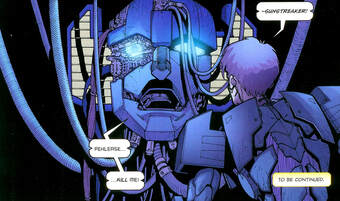 He'll never become the head of a major corporation.
​This is also the first issue with a Mosaic backup, Rain, written by Linda Cormack and with art by Kris Carter. It’s an excellent choice by showing the simple character driven nature these one pagers were aiming for, showing Hound enjoying the rain on Earth because it’s so different (and nicer) than the acid rains of Cybertron. Today it can be read HERE.

Next week, Eric Holmes concludes asking “What if miners striking led to fascism?” in the final part of Megatron Origin. 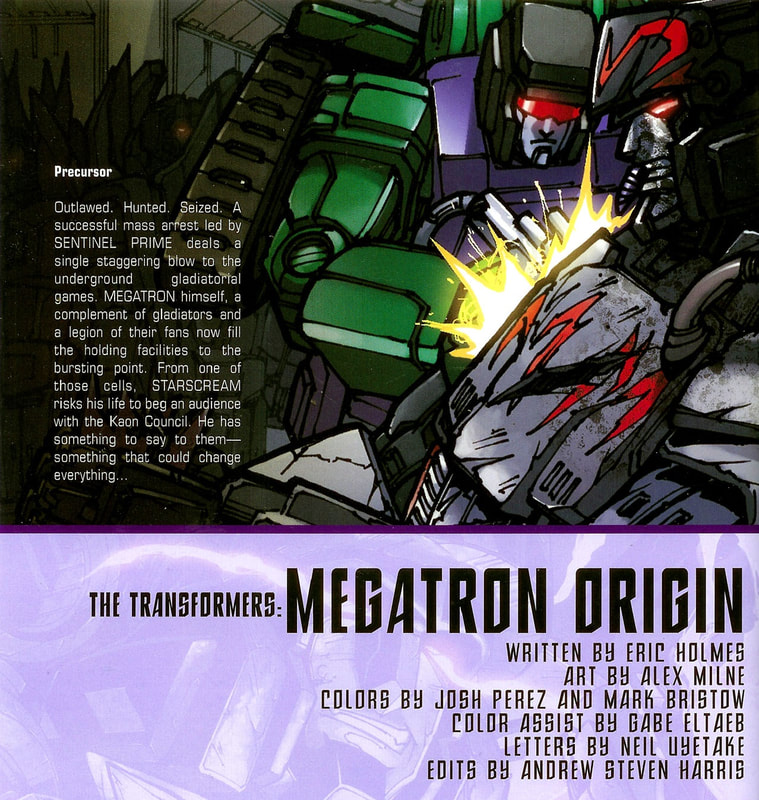