You Only Get One Shot, So Make it Count. 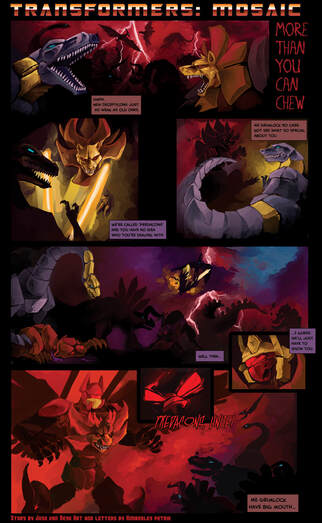 One reprinted in Reign of Stasrscream issue 5. (Click on image to go to artist's DeviantArt page).
​Addendum 3: Transformers Mosaic. 2007-2012.

Transformers fan fiction has existed from almost the moment Transformers has existed, from scrawling in school exercise books to James Robert’s massive self-published novel through to today’s AOO tags rammed with every possible combination of shipping.

Two things make the Mosaic fan comic project (as overseen by Josh van Reyk and Shaun Knowler from an idea by Kris Carter. All of whom you’ll be hearing more about later) especially interesting though.

The first is the scale of it, there was a real coordinated effort to bring writing and artists together to create these that resulted in far, far, more one page comics than I’ll be covering in this project. It is an incredible labour of love from everyone involved that is incredibly impressive to look back on. It’s probably the largest collaborative effort between fans ever attempted.

The other is the involvement of IDW. Which was firmly that these comics were not approved, not official and not canon for any of the continuities they covered. But they were supported, being hosted on the IDW forums and clearly read and seen by the editorial staff. Which made them feel more “Official” without actually being official, something that must have been very exciting for those involved.

Especially when, for around a year starting with the second issue of Devastation, IDW began reprinting them as backups in actual comics. With a very firm “Not official” disclaimer, but I’m sure that did not matter to those who created the ones that got chosen, who got their work into a published comic, often for the first and only time.

Unfortunately that’s one of the odder things about this project, logically you’d think the reason for IDW cultivating and supporting the Mosaics was to find and encourage new talent in an industry that eats it up and chews it out at an alarming rate. But very few of those who joined in would make the leap to official work, with probably the two editors being the most notable for getting to write what felt very much like a “Thank you” Spotlight. Though artist did do slightly better out of it (such as the aforementioned Kris Carter whose colouring I’ll be talking about more soon), it definitely felt like a rather brutally missed opportunity. 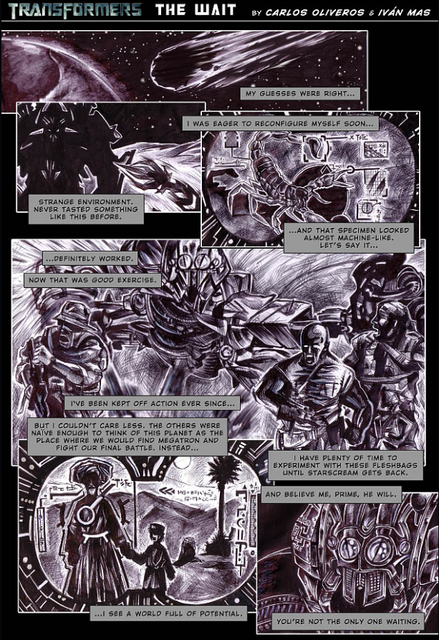 A Movie Mosaic, as featured in Saga of the Allspark issue 1. Again, link to DeviantArt by clicking on image.
​The printed as backups stories (which would also show up in places like their movie comics. The ones I’ll be discussing will all be G1 and in theory could be IDW continuity at the time) would ultimately end for what the Wiki calls “Undisclosed copyright reasons”. Probably being that whilst you can call it unofficial all you want, you can’t print something in an actual Transformers comic without Hasbro having some ownership and say in it. But the project did carry on for another four years.

Unfortunately for the effort of all involved, this attempt to create a vast library of fan created comics is probably best remembered now for those done “Officially”, such as the Last Stand of the Wreckers ones from a couple of years later (which are unique for being actual canon) and the very infamous one written by Simon Furman I’ll be talking about early in 2008.

Which is a shame as the idea—a done in one page in and out Transformers comic that could be about anything and set anywhere—is extremely clever. Giving writers and artists a canvas as vast as their imaginations in a format tight enough to hone and develop their skills easily. Not every one is a classic, but the very good ones are brilliant and the bad ones don’t outstay their welcome. It could in theory have run forever.

It didn’t because of a bad choice down the line. A story by a somewhat eccentric member of the fandom (which is why I’m not going to name it or link to it, it seems to have been removed from everywhere but their own blog and I don’t want to aim derision at someone who may have some personal issues when other people who should have known better were involved in getting this up) that had Ironhide finding Powerglide fucking his daughter (on the floor in the middle of Ironhide’s living room) and going all Southern hick Deliverance on him.

Now of course, there’s no shortage of not suitable for work Transformers fan fic and art. Much of it very good and hits the spot for a lot of readers (though in this case, everything about the story is terrible and the core idea of the dad owning the daughter till be approves of her boyfriend is prehistoric). But none of that happens under the gaze of an official Hasbro licensee.

The support IDW had given to the project in hosting and promoting it suddenly became a curse and, after a lot of complaints, Mosaic was formally shut down and the enthusiasm seems to have died for it as there was in theory nothing stopping people just carrying on doing on page stories using the support network built up under a different name and with no IDW encouragement, but it just quietly ended.

Which is a bum note to end on, and with the IDW forums now long gone and the ones that were used as backups not included with the trades, you do have to search a bit farer and wider to find them now.

But, it’s definitely worth the effort. Especially if you’re new to the world of fanfic, you get the entire breadth of Transformers up to that point in a vast and varied pick’n’mix of stories that act as an excellent sampler. As will be the ones I’ll be talking about from next week.

But, that’s the backup. The main event is going to hit you like a spaceship into a town in Devastation issue 2. 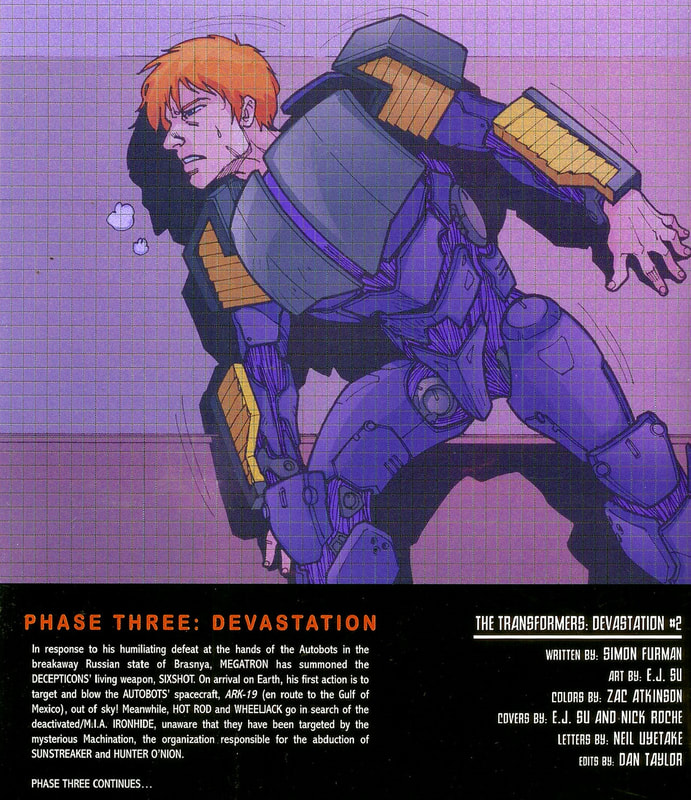