Justice is His Reward. 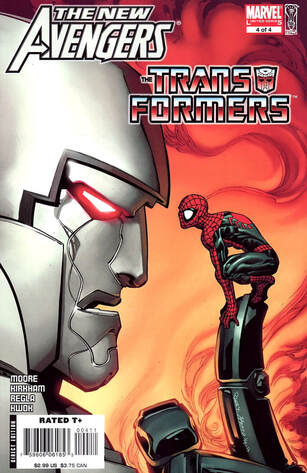 I tried. I really did. Last issue I worked hard to find a positive reading of the series. But I am finally beaten. Beaten by a moment near the middle of this conclusion where, after four issues of trying to get into the dome, someone suddenly does a Kryten from Red Dwarf and just goes “Or we could use the teleport”, and Jazz, Bumblebee and Wolverine orbital bounce inside. Making everything that happened up till that point completely pointless.

And that almost feels like all I need to say. But let’s get through this quickly:

Spider-Man, Doctor Doom, Ratchet and Prowl all spontaneously get better from their dire situations last issue, take out Astrotrain and use the machine to give the two Autobots Spider (and then when he beams in, Wolverine) powers. They then go out to join the fight whilst Bumblebee, Jazz and Doom go destroy the anger inducer, not stopped by Ramjet, who just flies away.

Outside, Iron Man is determined to beat Megatron alone in order to prove that man is indeed better than machine (must make Vision’s life hell back at the mansion), but gets the shit beaten out of him anyway. 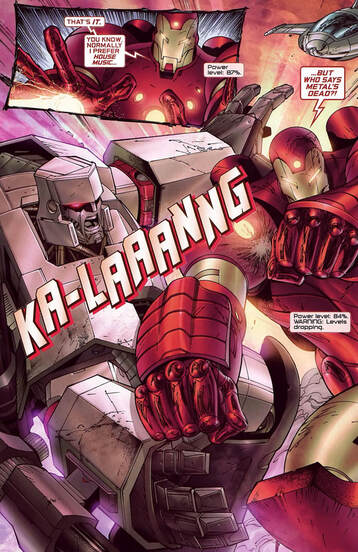 You'll never be a film star if you don't work on your quips.
​Luckily the super powered Autobots turn the tide, forcing Megatron to teleport everyone away once the McGuffin is exploded (killing Dr Doom. What a comic to do it in), followed by the Autobots running before SHIELD can ask them any questions. But is the Avengers jet now a disguised Ramjet?

That is, quite easily, the worst Western Transformers comic I have yet covered. A record it would hold for about four months, but the reason I’ve skimped through the summery is that there is nothing positive to say here. After a sense last issue that the team had caught up on chasing their own tale, the dialogue and art revert to just being awful on every possible level. It’s an ugly, cynical and half-arsed mess of a book and going on about it would be against the general positive goal of this project. That “Good work medic” is literally dialogue Prowl has as an attempt at banter with Ratchet sums up the whole thing. Though Stark’s weird and contrived gag about house music comes close.

So, is there anything interesting here, even if not good?

Well, there is an excuse for Megatron and Prime not having a fight so as to fit in with Escalation. And that is Megatron could kill Prime now Prime is wounded... but won’t because reasons. After Megatron is beaten he does hilariously have a rant about Prime being weak for relying on his troops and that’s why he’ll win next time they meet though. 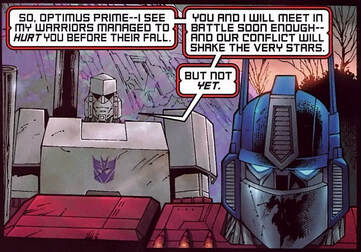 You could just shoot him in the back.
​Probably the strangest thing though is the idea that Megatron can use his body to teleport all his troops away, which seems like nonsense that comes out of nowhere (even with the hand wave that it uses up all the energy they got on this mission as to why it’s not done all the time), will be revisited and become a major plot point in later years.

Though that surely has to be a coincidence as even John “I never met a continuity point I didn’t want to explain” Barber never touched on why this supposed canon story was never mentioned again, only suggesting in a tweet that all the IDW versions of the Marvel heroes died the following year during the major event we’ve got coming.

Oh, and there’s also a panel of Spider-Man attacking Megatron that copies the cover of their original meeting during the Marvel days.

But that’s about it for discussion points. Meaning this issue doesn’t even have the dubious advantage that the next claimant of the worst issue crown (Spotlight: Arcee) has of there being a lot to talk about there. But for all the claims of canon at the time, this is so inconsequential that even what is technically a sequel to it in Spotlight: Ramjet will completely ignore it. 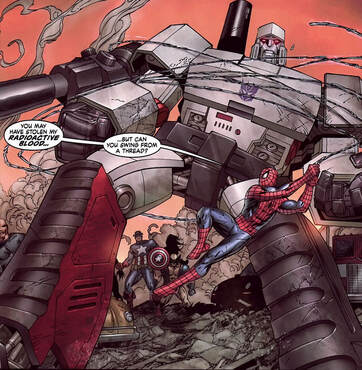 But perhaps there is a more subtle indication of things to come here. Down the line, we’re going to get a lot of canon orchestrated big Events and crossovers, both with other properties and in-between different Transformers titles.

They won’t all be as bad as this, but they’ll rarely be the best work of the regular writers, feeling forced, awkward and unwanted. An obligation to be gotten out of the way as quickly as possible by teams who’d much rather be doing anything else.

On that score, this fits in perfectly and can even almost hold its head up high. But much more on that as we go along.

So, there we go, a comic that is both terrible and irrelevant, resulting in what’s probably going to be the shortest piece I ever write for this.

But fear not loyal readers, I have a special bonus to be clicked on below that looks at something a little more... bite size.