If I’m Smart Then I’ll Stay Away, But I’m Not So I Guess I’ll Stay. 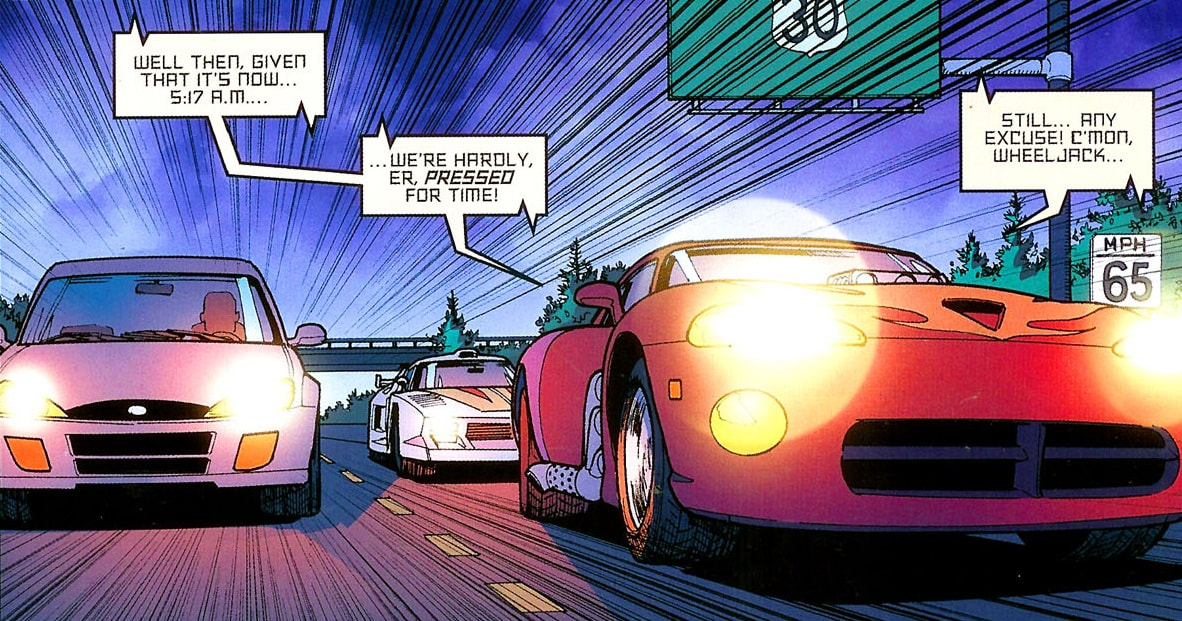 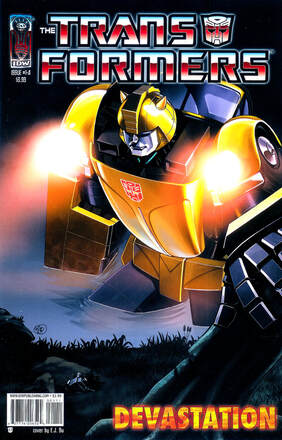 I no longer care. We are beyond the structure of phases here. Two, three... it barely matters any more.

The third of Furman’s many miniseries has a fitting name in more ways than one. It’s the last moment where his planned arc remains on track before dropping sales and other outside factors forced a massive change. I also remember it being the point where the wheels came off.

I’ve always assumed it was because Furman was told he had to wrap up early and differently midway through the run and we get some rather drastic rewriting on the hoof (especially with moments like the quote I opened with that seem to be throwing shade at having to abandon the carefully prepared structure). But in fact, we’re going to see very publicly the moment Furman found out his ideas were not being carried forward as planned (as I’ll discuss in more depth when I get there), and that will be in mid-February, as this series’ final issue is about to come out.

Therefore, everything I’m going to discuss in this miniseries is still part of the original vision as intended, even when that feels like it can’t be. Though I suppose it’s possible that editorial (Dan Taylor directly), who would have at least had an idea of what All Hail Megatron was going to do before February may have been making Suggestions without spelling things out. 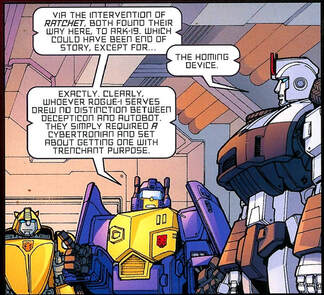 Lucky Nightbeat has some long arms because he's reaching.
That’s a mystery for another time though, and one that may not be worth asking Nightbeat to investigate as we open with him looking at the PDA Verity stole in issue 0. We later find out it has been three weeks since Escalation, making me wonder why he’s only just started on this. Indeed, no one seems to have achieved anything whilst Prime was off visiting Omega Supreme.

This is largely a device to recap the story so far, as finding a homing device on the PDA means Nightbeat can put together a chain of events that he can then report to Prime. Which is largely everything Prime already knows.

However, I’m somewhat relieved that this happened as the gap between series (which has been less than real time the way I’ve done this, so goodness know how we kept up at the time) means I’ve rather lost the threads of the increasingly involved ongoing plots. Indeed, before starting this issue I’d forgotten the PDA that opened the whole story entirely. 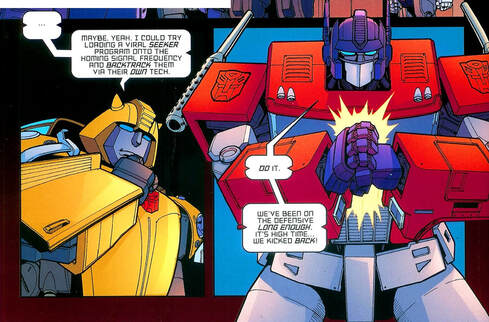 DO IT
​Nightbeat does make some unfortunate and bizarre leaps of logic though. He decides the PDA had belonged to an agent working for the same organisation that grabbed Sunstreaker (not a guarantee considering that we know there are at least two distinct groups with humans and Cybertronian tec involved), the homer having given away the location of Ark 19, which made them decide to grab an Autobot having been previously staking out the Decepticons.

The problem here is, we know later that the Machination is run by (SPOILERS) Scorponok, who wouldn’t been to send a guy sneaking around an abandoned Decepticon base when he already knows all the standard operating procedures they use. Plus, there’s no way they could have thrown together the Sunstreaker shells (which we’ve been told are hard to get) and all the Sunstreaker bodies unless the Ark had well and truly been staked out before Infiltration. Unless there was a much bigger gap between that and Escalation than was hinted at.

Also, we’ll see later in the issue how easy it is to find an Ark with Decepticon tec to hand.

Whilst I don’t think the PDA or what the guy wanted from the Decepticon base will ever be bought up again, this does feel like a bit of a fudge for an idea that hadn’t worked out for some reason.

Anyway, Nightbeat’s brilliant idea is to move the Ark because they’ve been compromised. As they knew the location was compromised from the moment Sunstreaker was taken, it’s worrying it has taken them three weeks to think of this. No wonder Prime is frustrated enough to do his best Shia LaBeouf “DO IT”. In a punching his fist pose Megatron is also doing in the next panel after we switch locations, because even after you’ve stopped dating you can still carry on doing the body language you picked up from your ex.

LADS
​During the briefing scene though, we get a cutaway of Ratchet (still apparently doing receptionist work) informing Hot Rod and Wheeljack that after fruitless searching, Ironhide’s transponder has finally activated.

Nothing suspicious about that.

He is about to be crushed at a scrapyard in Warsaw in three hours time. Hot Rod thinks that makes for an easy trip, but they don’t realise they’re being followed because apparently no one told them about the base being compromised and staked out.

At the Decepticon base, Sixshot has arrived, and Megatron brushes aside his concerns about being called in early and boldly states he no longer cares about the rules and wants devastation. Which worried the other Decepticons (huddled together in a way that can only be called a Bunch of Lads), who are terrified about how far off the deep end Megatron now is. But, as Astrotrain points out, only one of them has the balls to tell him that.

One thing that has happened in the last three weeks is that the Brasnya situation has apparently become completely chill as Skywatch, an American organisation, are able to bring trucks, tents, four helicopters and a big crate to the site of the battle over the pipeline on the Russian border with no one noticing. 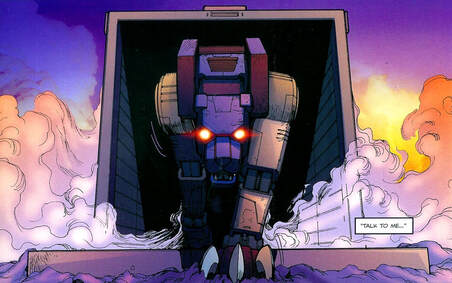 Origin of his Russian accent.
​Which means neither the Russians or Branyans were interested in looking into the whole robot thing. I’ve just been reading another book on the Dyatlov Pass incident (one of my favourite real-life mysteries, hit that stuff into my veins) and the Soviets there spent weeks studying the location of a weird happening. Guess they just weren’t as tough in the Noughties as in the Fifties.

After much musing from Agent Red about having waited 20 years for this and uncertainty over whether the control mechanism will work or not (guess they’ve not bothered to test it in twenty years), the box is revealed to contain Ravage. Who can smell his contemporaries and is sent in pursuit of them.

As they’re all in America I hope Ravage can swim. Can he really follow a smell when both sides would have either flown away or beamed out as well?

Amazingly this plotline will only get sillier as it goes on.

On the Ark, preparations to leave are being made, with Jazz looking to get his stash of hooch to safety and therefore having no time for Verity and Jimmy who he just ignores as they try to find out what’s happening. 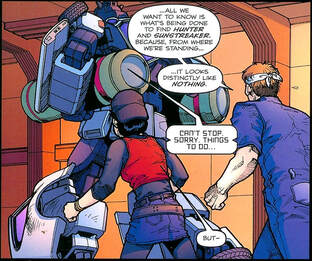 "Gotta protect my home brew!"
​Which rather sums up their role going forward. And the poor buggers are still wearing the same clothes they’ve been in for at least a month now and have been gassed in.

Someone who is getting somewhere is Sideswipe, who makes an impassioned plea to come to Earth to Prime, which he actually accepts, ordering Hound to bring his unit over.

Whilst at the Con base, the Lads, even knowing they should stay away, quietly sneak into the room where Starscream is doing his best cosplay of Luke in the healing tank in Empire, ready to go past the point of no return in disobeying orders.

This has been a very bitty issue up to this point, jumping from plot set-up to plot set-up with little to connect them, making for a disjointed and unsatisfying read.

So it’s nice for the issue to end on a proper big scene as the Ark takes off. For some reason all the Autobots are using mid-Noughties PC monitors, except for Bumblebee who plugs directly into his console like he’s a SF robot. 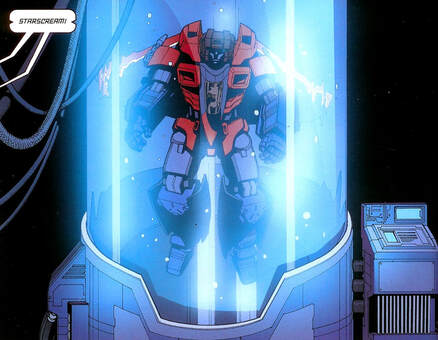 His name is a killing word.
As the Ark leaves, it turns out you really don’t need to sneak a homing device in to find the Autobots as Ratbat is watching outside.

Not Senator Ratbat mind, nor (SPOILERS) the tragic mindless slave he’s about to become in the Eric Holmes story. But an updated chatty G1 Ratbat who now turns into what is now an actually more obscure alt mode than a cassette, a “Sony Milo”. Basically, an early attempt at a smart phone that’s not a phone.

The Autobots are trying to move to the Gulf of Mexico, but whilst the trip initially seems to be going well, Sixshot appears and before Prowl (serving as Captain, Prime magnanimously is just observing) can react, blasts a massive hole in the ship and sends it hurtling down towards a town...

Which certainly looks to be pretty devastating.

That is not the most gripping of issues, just jumping all over the place and you really have to have been following from the start by this point to understand everything, even with the healthy recap. That an issue 1 is not a good place for readers to join the run may be why sales were falling. 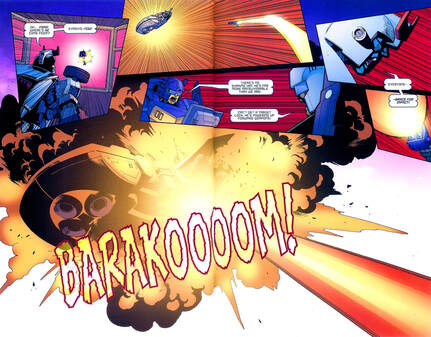 Well, they should all be dead.
Just about every one of these setup scenes is longer than it needs to be as well, with the Skywatch unleashing Ravage sequence especially not needing to be three pages.

The best of them is probably the Decepticon stuff, with genuine fear and a sense of crossing a line from their actions coming across nicely, even if all saying Starscream’s name in unison is a bit cheesy.

But it rallies around for the final act, with flight of the Ark being suitably tense as we know the Autobots are blown even if they don’t (though they should), and Sixshot’s double page spread attack on the Ark and is subsequently diving towards a town is gorgeous art from Su, capping off an issue where he perhaps isn’t at his best (there’s a lot of dull surprise expressions). It’s such a good sequence in fact, you kind of forget the stupid decisions the Autobots have made to get there in the first place.

Hopefully, with the awkward opening out the way, things will improve for the second part.

What may be beyond saving is the finale for the New Avengers crossover, but only next week will tell us that. I’ll also be doing a Mosaic as we approach the point those were being reprinted in the comics. 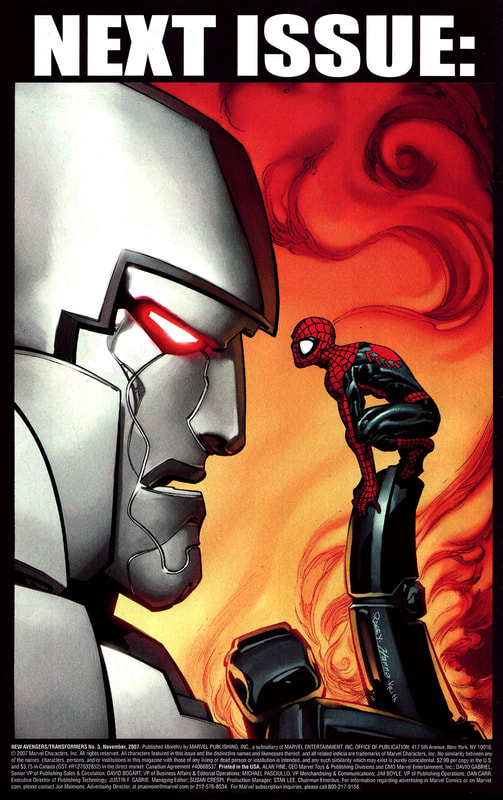