The Star-Spangled Man with a Plan. 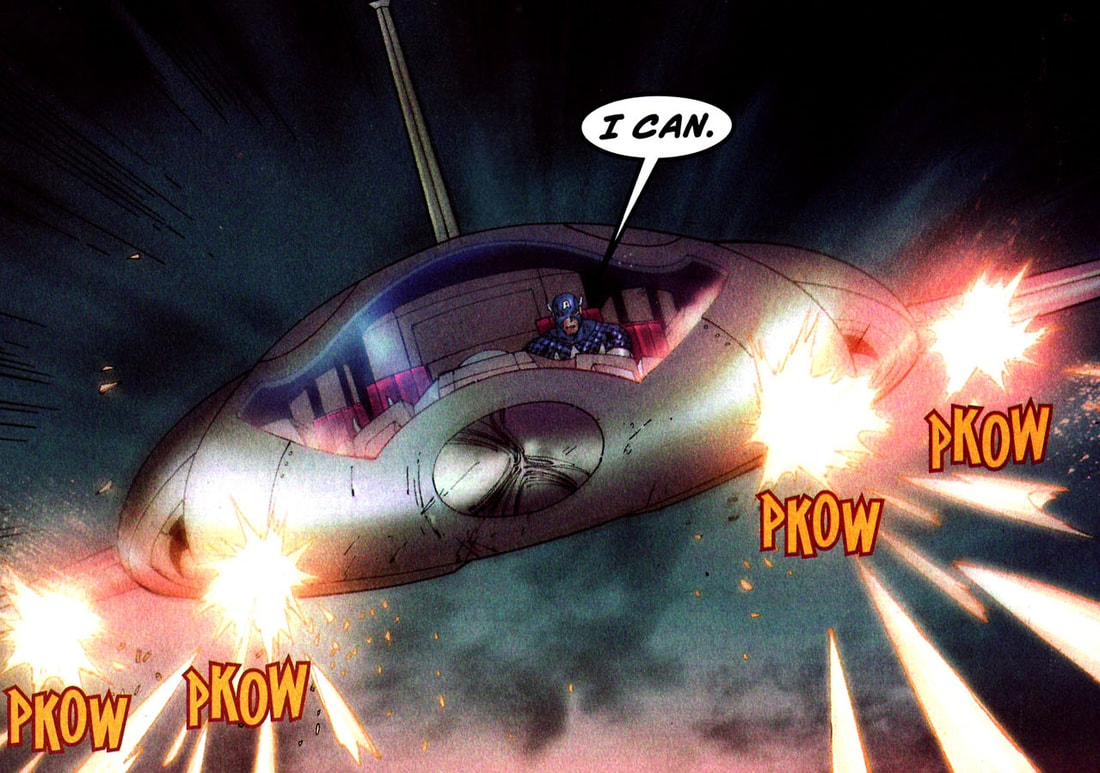 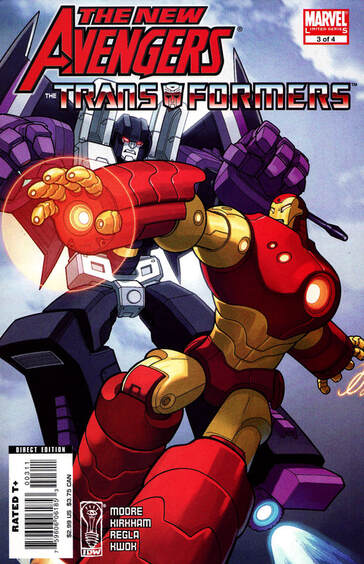 Save it Ratchet, go with the human. Keep him from getting his fleshy little body crushed. I’ll just save the planet myself.

The purpose of this project has always been to try and find something positive in every issue (not you Spotlight: Arcee), however small, on the premise that it would just be exhausting for you to read eight solid years of negativity. This comic has, up till now, provided the biggest challenge yet for me on this intent, but early in this third issue I suddenly had a thought that could in fact make it the most subtle and subversive thing I have yet covered.

It comes as Iron Man is fighting the Decepticons in his giant suit, talking about how he’s been preparing for this, and we see him in the suit, floating much in the same way as his POV would be portrayed in the film the following year. I’m not hugely familiar with this period of Marvel comics (having read more 70s and 80’s stuff), but presumably this was standard at the time.

Except here, unlike the films, it turns out Tony Stark likes to fly his Iron Man suit in his underpants.

Which feels so ridiculous, it makes me wonder if this comic is being intentionally a complete and utter piss-take. Which would make sense considering Moore’s one other Transformers comic is an out and out comedy. 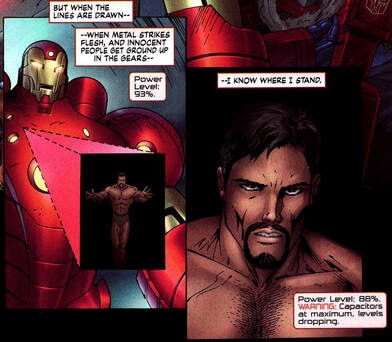 Captain Underpants.
​So, what if every seemingly insane choice, every bit of bad dialogue (like Luke Cage calling Ratchet “Ratch”, or saying “Represent, X-Men style!” to Wolverine), is deliberately poking fun at and sending up terrible comic crossovers? A cunning, brutal biting the hand that feeds bit of writing that he somehow managed to get past both Marvel and IDW. Suddenly the whole thing becomes something you’re laughing with, rather than at.

Which feels like something born out by Captain  America turning up flying the military jet that brought them, firing missiles and singing the American national anthem whilst Falcon gives him a serious “Why didn’t you do that three issues ago?” look.

Of course, all this is based on the theory that Tony Stark flying about in his knickers wasn’t just the thing he did in the comics at the time. But please don’t tell me if it was, let me cling onto this one vestige of hope.

Because this remains a comic where the plot advances at a snails pace. The majority of our heroes spend the time still fighting outside, with Iron man’s armour not especially being more effective at battling Decepticons than Wolverine is, with the added problem that he drains so much power three Autobots have to plug into him to charge him up again. 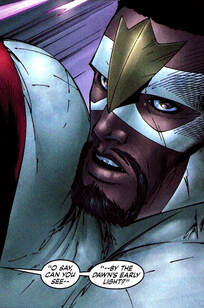 His expression might actually be the best thing in the issue.
​Because apparently the Transformers use US style plugs.

Unless it’s just their robot dicks.

The only mildly interesting moment, clearly born of having read Infiltration, is Bumblebee being keen to just blow up everything and sacrifice those inside the dome, and Carol agreeing with the Lyndsey Lohan hologram, presumably because she’s kind of hot.

There is slight advancement though as “Ratch” and Luke Cage do manage to burst through a weak point in the forcefield... rapidly followed by Prowl who doesn’t trust Ratchet to destroy the mind control McGuffin rather than try and rescue Spider-Man. Indeed, after the hint of it in Spotlight: Kup, this is the first full flowering of the final form of IDW Prowl, as he is just a complete and utter dick to not just Ratchet, but a representative of human authorities in Luke Cage. No tact, no diplomacy, it’s lucky for him that this comic was resolutely ignored going forward as this would have been a disaster for human/Cybertronian relationships.

Whatever a spider can.
​Oddly, the building on ideas from the main IDW comics continues as Ratchet explains to Cage Prowl has suffered from having his authority undermined lately. Something repeated as Prowl comes across Ramjet guarded the McGuffin, who takes great delight in pointing out that he knows what it’s like to have a leader who doesn’t have faith in you.

And just as it looks like Ramjet is going to do a Starscream and let Prowl wreck Megatron’s plans (I don’t think there’s any way this wasn’t planned for Starscream originally), it turns out to just be a distraction so that someone can zap Prowl from behind.

And this at least has to be intentionally meant to be much funnier once you have read Spotlight: Ramjet.

Meanwhile, Ratch and Cage finally get to where Spider-Man is being held... and are immediately taken out by Megatron using Spider-Man’s power of hand lasers.

There characters really are getting nowhere fast.

At this point, Megatron then projects a message outside (presumably tired of waiting for Prime to come to him) and reveals his secret ally... Doctor Doom! 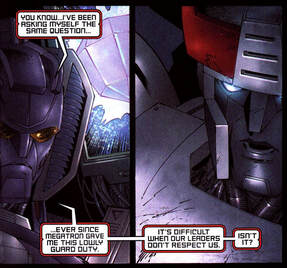 Turns out Ramjet is the one character who understands Prowl.
Wait, how did Doom double back and get into the Dome without anyone seeing him?

Which is rather a moot question as Doom’s one contribution to this team up is to suggest Megatron order everyone to surrender. Which amazingly (you’d think Megatron has never met Optimus Prime) does not work, so Megatron immediately turns on his new partner and zaps him.

But doesn’t wait to check if he’s killed him.

All of which means the Dr Doom/Megatron team-up lasts exactly two panels, if you count the one where Doom zaps Prowl without you seeing him.

I mean, this has to be an intentional piss-take, right? 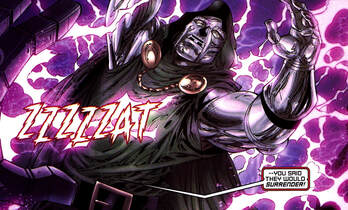 Is he doomed?
​Having now had enough of waiting around for the Autobots and Avengers to achieve anything, our cliff-hanger is Megatron coming out of the dome to kill everyone himself.

And I honestly can’t remember if the next issue manages to do a “certain point of view” way of fitting in with Escalation saying Prime and Megatron haven’t fought in a very long time.

That was comfortably the best issue so far. The art is smoother and actually has a few nice panels and the dialogue is generally less awful, with Bastard Prowl, however nonsensical his decision to piss off Luke Cage is, being good fun.

Indeed, if you go with my thesis this is all an intentional wind-up, this becomes quite clever and funny. 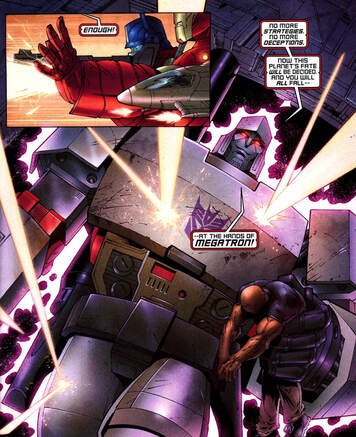 With his Luke Cage comfort doll.
If you don’t go with my thesis (and let’s face it, I’m stretching harder than the story is in trying to include a Doctor Doom/Decepticon alliance), better does not equate to actually being good, with the majority of the characters not actually doing anything in a story that could have easily condensed three issues into two. I hope Stuart Moore was having fun here on purpose, but I’m not sure anyone else is.

Which is a pretty devastating final thought, but next week the real Devastation starts. 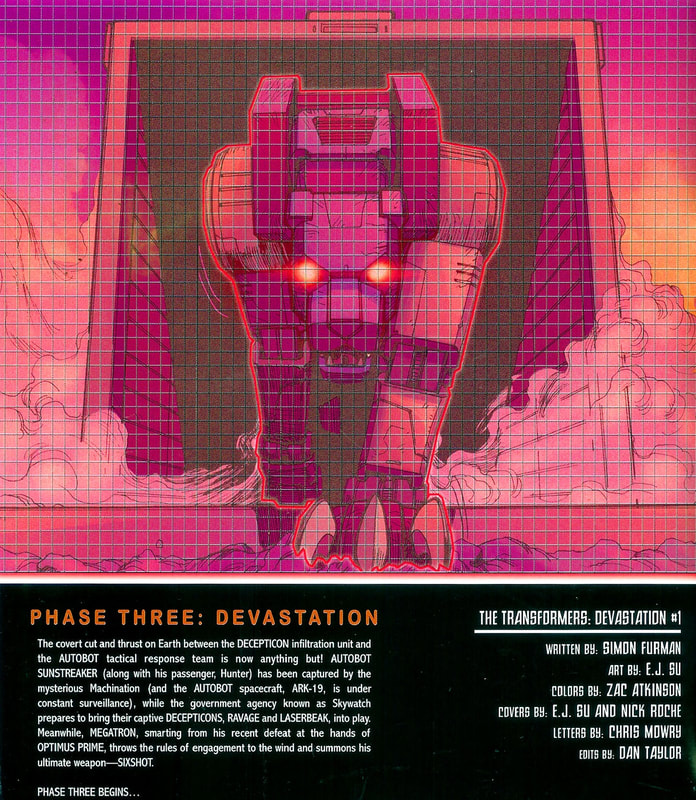