It’s Only Words, and Words are all I Have, to Take Your Heart Away. 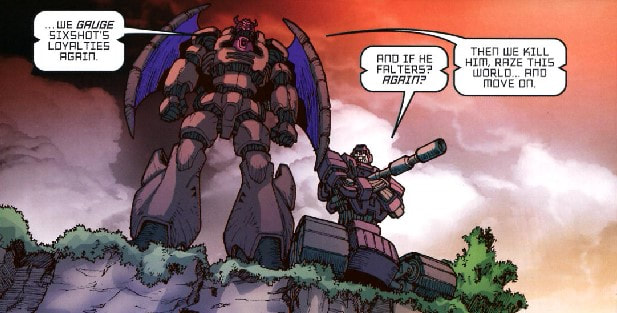 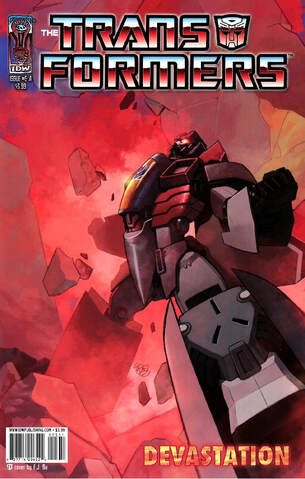 Negotiating? What are you talking about? He kills. He destroys. He eradicates. He doesn’t negotiate!

Continuing the trend of what worked last issue, we open on a Starscream based flashback, to the very old days when he was still a good, strong loyal servant of Megatron, whose “Sole duty is to see to your safety”. And he’s concerned about how powerful Sixshot is, and how he might turn. But Megatron is not so foolish as to have a weapon without an off-switch...

It’s a simple scene that more set-up for what Starscream does later, but the contrast between the happy little concerned sidekick and the character we know now, is great fun. And makes for a good gag when we flip to the present and see what sort of second in command Megatron has at this point, as he tries to get information on who is attacking them from Blitzwing, only to get a variation on “I don’t know” to every question, with the only opinion he’s able to offer being that the Reapers are “Hostile”. Which gets an exasperated “You don’t say”.

But maybe Megatron isn’t so sharp either, as when he asks where Astrotrain is, Blitzwing gives him the most incredibly nervous and obviously bullshit excuse about him checking out the orbital defences for extra firepower, and Megatron buys it. 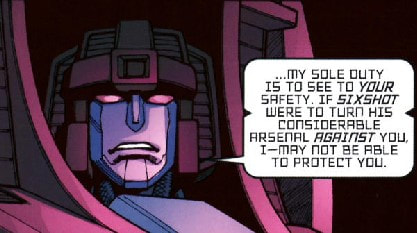 We all know what his real sole duty to Megatron is.
​Astrotrain is actually being equally nervous around Starscream, especially when it comes to the fact that if this doesn’t work, Megatron will have them all killed. Plus there’s Sixshot, but Starscream knows how to deal with that.

This is a surprisingly strong opening considering it focuses on the Reaper plot, but things take a turn as Sixshot arrives and Reaper A asks Reaper B (because they’re not important enough to have names) what happens if this latest attempt to recruit Sixshot fails? To which the response is “Then we will kill him, raze this world... and move on”.

So even the Reapers, the only characters with any investment in this plot, aren’t actually so bothered either way how it goes. Adding to the real feeling this is a waste of time. 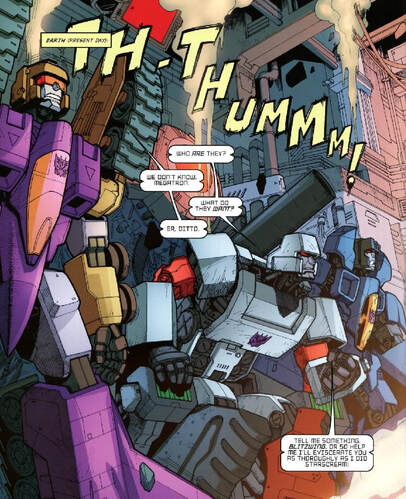 The only sane man.
​Speaking of a waste of time, last issue’s weaksauce cliff-hanger of Jimmy and Verity being dead is resolved by Ratchet simply shocking them back awake. There’s an attempt to make it a tense sequence with Jazz cheering him on, but it was such a silly moment it’s hard to care about it more than at a Reaper level. Though there is the suggestion that they might have been dead long enough for brain damage to have set in. But with Jimmy, who’d tell?

Dead is also a good word to describe the activity on Ark 32. Having just barely survived an attack by Sixshot and with everything moving so fast as their enemies increase the pace of their actions, everyone just sort of takes five. Bumblebee and Jazz go in for repairs, Optimus is chatting to Jetfire on the SPACE phone about Jhiaxus and Nightbeat is looking at an autopsy result.

Which confused me as I couldn’t work out whose autopsy Nightbeat could be reviewing, I did wonder at first if it was the Koska facsimile (there was an implication in Escalation that Nightbeat, as a brainwashing victim, might have messed up the Orbital Bounce on purpose), but the Wiki says it’s actually Leadfoot from Spotlight: Galvatron. But where that is going I have no memory of.

The important thing though, is there is no sense of pace or urgency here whatsoever. Everyone is just very casual. 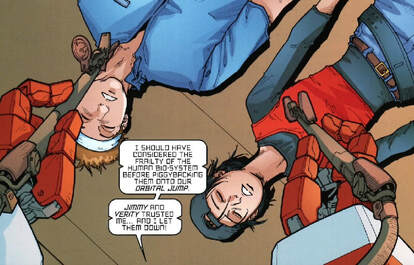 Shame it's too early for Jolt to do his bring back the dead with electricity trick.
​At the junkyard, Hot Rod finally has the Galaxy Brain idea of looking at the compactor for Ironhide. Someone make that guy a captain with thinking like that. Sadly it’s too late, as the pissing about means the Headmasters find them, with Wheeljack being taken out. Which lets Hot Rod fully unleash on the humans with no one to hold him back, leading to him winning a game of chicken and taking one car out. But there are so many more...

Shame he didn’t have his big idea sooner really.

Where the plot is really crawling is in Tampa. Hunter comes out of the cake tin, uses his new super strength to take out a scientist and makes it to the bay with the Sunstreaker bodies in it and is all ready to steal on whilst quoting music (“I gotta get out of this place”/“Ticket to ride”). Getting to the moment where he becomes a joined Headmaster is definitely being dragged out at this point.

At the Decepticon base, the Reapers actually manage to make Sixshot pause with their offer this time, which leads to a genuinely funny moment of Megatron being agog and Blitzwing suggesting maybe the phase sixer is “Negotiating”, leading to more exasperation. 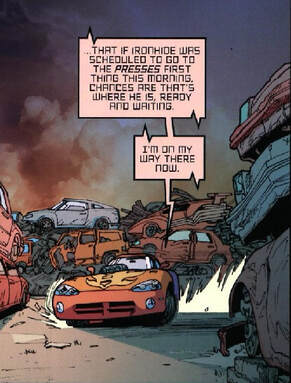 What a twist.
​It’s also a nice gag that Sixshot isn’t swayed by the speech, but by the complete coincidence of Starscream choosing that moment to come flying out and attack him. Making him firmly accept the Reaper’s offer.

Not that anyone cares, and Starscream simply uses Megatron’s secret password to shut down Sixshot and make him crash. Which means either Starscream is still higher in the chain of command than his moaning in Infiltration suggested, or Megatron never changes his passwords.

I’d go for the later suggestion, considering the password is “Reset, Pi-Orion-Actual-Orbit-Enable”. Meaning a dangerous superweapon has a weaker password than the website I order my Tesco uniform from.

Unintentionally interesting though (as Furman does not subscribe to the cartoon’s pre-Prime name for Optimus, he’d tried to make Optronix a thing), is Orion being in there. Which later writers will confirm to be Prime’s original name. So boy is there all sorts of subtext there, as Llama God pointed out on Twitter, imagine having your ex as part of your work password that long after being dumped by them. Someone can write a thesis out of that. 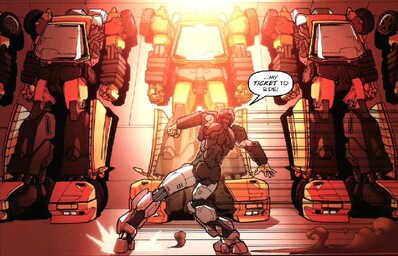 I'd respect him more if he were a Frog Chorus fan.
​Presumably so as not to draw any attention to his old boyfriend hang-ups, Megatron just gives a severe glance at everyone over Starscream being up and about again before leading the troops into battle against the Reapers as a massive distraction.

Our two pronged cliff-hanger is Prime revealing the “Security facility” on Garrus 9 has been attacked and they are therefore leaving the planet immediately and certain “Recent inmates” cannot be allowed to escape.

Much more on that in the next two weeks.

Elsewhere, Skywatch, having lost Laserbeak and Ravage, set in motion their backup plan of setting Grimlock after them. 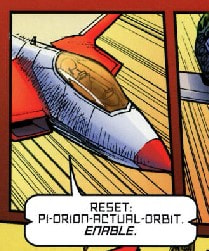 There’s definitely a worry when the best parts of an issue all come in the Reaper plot, but Starscream, Megatron and the clown squad Decepticons remain the absolute highlight here, elevating what is a completely pointless diversion.

But otherwise, every other moment feels extremely dragged out and like an author who is desperately vamping to meet the page deadline. Which Furman may well have been as things shifted around him, but the end result is still momentum free. 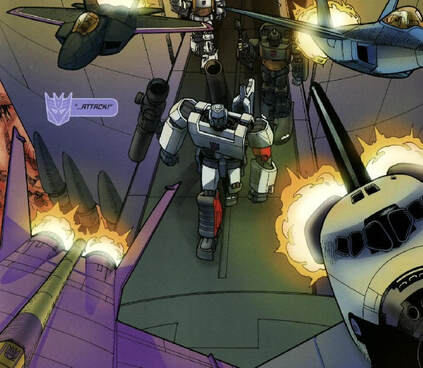 Su is a good lad.
More positively, E.J. Su is back from paternity leave, and does the absolute best he can with the material. His “Where did I get these people from?” Megatron is especially brilliant.

This issue’s back up Mosaic is The Curse by Carlos Oliveros and Ivan, about Blurr dealing with his need for speed in an energon shortage. It can be read HERE, but is the first one of these to have made print that didn’t really do anything for me.

Speaking of Mosaics, between this issue and... The Thing That Comes Next... there was a very curious one released. Which is the subject of the next Addendum...
​