And What Will Tomorrow Bring?

It’s true what they say: You never can go home.

*Furman’s blog entry is undated, but this is the date of the first comment, from my old podcasting partner, Tom McNally!

This is definitely an addendum where everything around the comic I’m talking about is much more interesting than the comic itself.

Not that Hail and Farewell is bad, it’s a simple story of Hunter, two years from now, going home and thinking on his dead dad and abusive, alcoholic mother, before going out to merge with Sunstreaker and recalling how his recent experiences fighting Scorponok; teaming up with the Dinobots; going into space and fighting off a Decepticon invasion have changed him for the better.

Which is all well and good, even if it does fully show up the stupidity of his name, in that it’s very hard to take stories of an alcoholic destroying a family seriously when it’s the O’Nion family.

Unless it’s a story that’s supposed to bring tears to your eyes.

And the art by Steve Buccellato and Don Hudson is perfectly nice as well, even with them having to use the “Evil” Sunstreaker head as they didn’t have reference for the Hunter version. Though that this was the first time we saw the combined Huntstreaker, rather than in the main comic, is the most damning indictment of how slowly that plot has been running the last few issues. 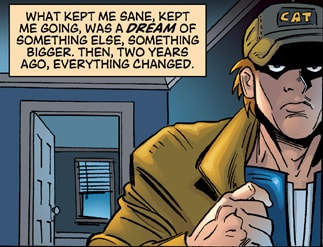 When you get to the end of All Hail Megatron.
​Where this becomes more interesting, and is shown by the fact long time Transformers letterer (and pretend strip editor on the old Marvel UK comic when Furman was writing) Richard Starkings did the words, is that this was a big first for the Mosaic project: Simon Furman wrote it.

And on his blog announcing it, Furman was very clear. This is not a what if or could have been hinting at what might have happened if he wasn’t about to leave the book, he firmly calls it a “Tease” for the ongoing story.

More importantly, and in another first for the Mosaics, he calls it “Canon” (and his blog entry, with the full comic, can be read here).

Except, almost immediately, Chris Ryall went on the now defunct (so sadly there’s no link to provide) IDW forums to equally firmly say it is not canon.

Which, as long-time readers will know, has been a fly in my ointment for some time and what this actually means is something I’ve gone back and forth on as I’ve been writing. The question being that, alongside the end of Devastation, with All Hail Megatron announced (and the title of this story nodding both at it and the forthcoming end of his run) and surely with plans for Revelation and Maximum Dinobots well underway, did Furman genuinely have the fact his stories are not going to end the way he wanted sprung upon him?

It’s also quite hard to be sure who is being unprofessional here: If Furman (as one would hope) had checked beforehand that it was OK to do a canon Mosaic with IDW editorial, then Ryall publicly backtracking on it so quickly and firmly is bad form. If, on the other hand, Furman did all this off his own bat, then the reaction does become more understandable.

My best guess: Furman was assuming none of his human characters were going to appear in the soft reboot that was coming (and I doubt anyone involved in All Hail Megatron knew Hunter would be appearing in the second half at this point, let alone he’d be killed, as the switch from a fresh start story to one dependent on the Furman era is very awkwardly done) and it was therefore safe to tease Hunter’s many future adventures. 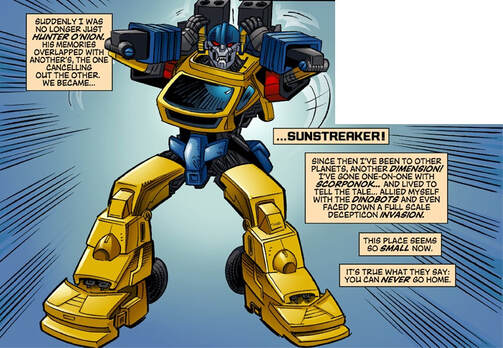 About bloody time.
And if you ignore that death, of the things teased, it’s only going into space and stopping an invasion that firmly never happen, even if it means he has a somewhat inflated definition of having “Teamed up”, with the Dinobots. So, knowing he was going to have two arcs to wrap-up everything, I would guess Furman genuinely thought he was going to get to fit Hunter IN SPACE in. And the stories are going to be so in flux that even the end of that first wrap-up arc is going to tease things for the second that will never happen.

Which, again pure guess work, would lead me to suggest that the very firm denial was because, even if the Hunter side of things hadn’t been stapled down yet, Sunstreaker’s basic role in All Hail Megatron had already been plotted out, and that meant Sunsteaker as a normal Autobot with no little guy.

Which is reasonable in and of itself, but means we have a real glimpse of how the left hand does not know the right hand is doing. This strip should never have gotten to the point of being released with a declaration of canon, conversations should have been happening behind the scenes not just about this but on the wrap-up and lead into All Hail Megatron in general.

Either a one-page tease with another character should have been substituted (though it would have been hard to do it with another human considering how completely disinterested in Jimmy and Verity Furman is now), or, if whatever decision made Ryall turn on it really did come too late to change anything, it should have been put out without the canon proclamation.

Because IDW are a few months away from trying something incredibly difficult: Having two different authors writing two different series that are set one after the other but running concurrently and both attempting be big and definitive and important.

Doing that without them clashing into each other would be incredibly hard, and at the first hurdle of a simple, one-page, online comic, they do indeed clash and clash hard. At best is shows that IDW editorial can be easily confused, and at worse it’s an almost sneering contempt for the writer who has established their entire continuity. Either way, it is not a great sign for the future.

Though of course, if you want a comic that really is brimming with confusion and contempt on every level, next week is definitely going to be the one for you. Yes, I finally hit the albatross that has hung round both my neck since starting this project and round the neck of any attempt to discuss gender in Transformers for 13 years. The infamous Spotlight: Arcee. 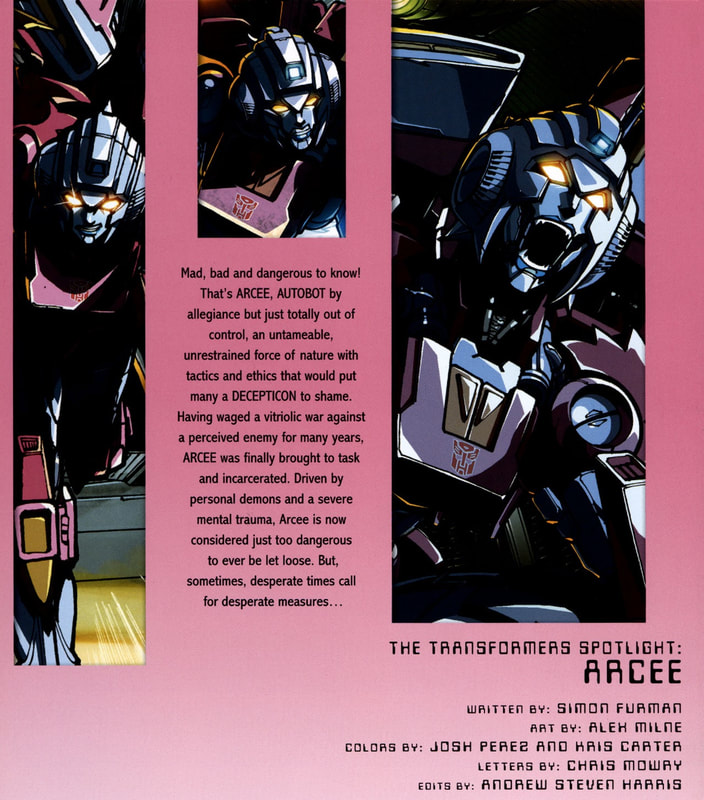