They're All Wearing Those Kinky Boots. 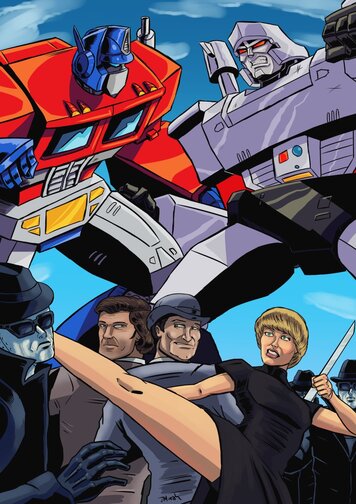 The New Avengers/Transformers: Autonomy of the Cybernauts Part 1. July 4th 2007.

This was a comic I was absolutely delighted to have discovered had happened, as I’m a massive fan of the classic British television show The New Avengers (though as this picks up from where the TV series ended, it really should be Brian Clemens and Albert Fennel Present The New Avengers in Canada, the comic sensibly using the team’s trips to Toronto to connect to the Ark having crashed in the country at the end of the Marvel series).

And though they have been over used in modern revivals of The Avengers, teaming up their own classic robot villains, the Cybernauts, with the Decepticons was an inspired move. As was revealing Steed’s “Big Cat” Jaguar was actually an Autobot, Melon (the German for “Bowler”, as used in the title of the show in that country).

The New Avengers was also of course a show that resolutely fought against nostalgia, things from the past were continually coming back as new and deadly dangers, with robots from four million years ago being the perfect endpoint for that thread. This is clearly a comic with so much potential that...

Is handed a note.

Wait, what do you mean “The other New Avengers”?

If I go Crazy, Then Would You Still Call Me Superman? 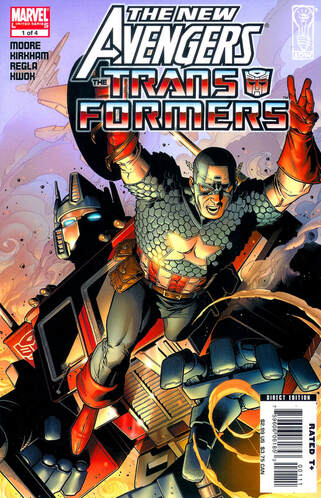 What, I can’t talk street?

And thanks to James Marsh for doing the art for my little “Let’s put off talking about the comic as long as possible” joke.

Yes, this is a strange one. In some ways, it should show the “Arrival” of Transformers as serious comic. Because it’s often said, usually to put down the opinions of people who do read them, that “Transformers comic readers do not read other comics”, though frankly I always thought it would be better to describe the snobbery as “Comic readers do not read Transformers comics”, but now they’re in a four issue miniseries with real superheroes that have been in movies and stuff. Meaning people who’d turn their nose up at Spotlight: Kup but buy every single confusing multi-series crossover featuring an X-Man will now lap it up.

And I do believe this did sell very well.

Because whilst we’re in that strange place where Transformers (just off the back of its hit movie) was a bigger brand than The Avengers (before even the first Iron Man film and when the comic was considered such a dead duck it had been relaunched with “New” in the title and shoehorned in major guys), it still has Wolverine and Spider-Man in it, who are iconic enough for just about anyone to get excited about them hanging out with Optimus Prime.

And in retrospect of course, every single Marvel hero in this comic has been portrayed in live action in the years since. Maybe just on TV like Luke Cage, but equally you’ve got billion-dollar film icon Captain Marvel as well. This should be a very exciting book. 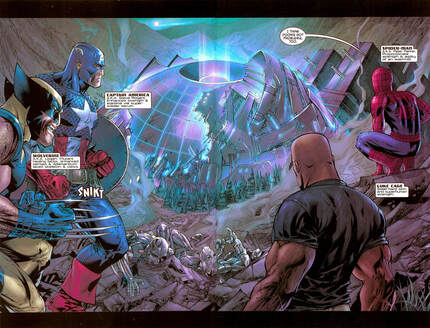 Oh, Spider-Man, that's who that guy is.
From the fact it doesn’t seem to be in print any more (the IDW Collection hardback that originally had it in is still available, but the Amazon description doesn’t list it in the contents, suggesting a reprint with the crossover removed at some point. If anyone has bought a new copy recently, let me know), I guess I’m not the only one apathetic on it.

That being despite the fact that IDW and Marvel have an excellent working relationship, not only with IDW handling the kids Marvel books and doing prestige reprints of their material, they’ve also successfully worked together to keep thing like Spider-Man’s appearance in the Marvel Transformers reprints intact. It may well be a licencing issue that’s seen it lost to time, but if so, it must be a very strange one for such close partners and for a book that the trade of which would get a natural boost every time there’s a new MCU film.

Maybe... they’re really embarrassed by it?

Which is all strange and quite funny in retrospect, because at the time both companies decided Optimus Prime meeting Wolverine wasn’t a big enough draw, so they went to town on emphasising this wasn’t a What If?, nor an irrelevant sidestep, this was canon to both ongoing comics and vitally important.

Which was of course a lie. It would be hard to matter to The New Avengers continuity when it is for some inexplicable reason set two years ago (between their first and second arcs apparently) for them and nothing here will ever be acknowledged by Marvel. Equally, and more impressive considering it did get a spinoff Spotlight, it is all very obviously not canon to Transformers either, even though the Wiki cheerfully pretends it is (it’s supposedly set during Escalation issue 1 when even this first issue has Autobots and Decepticons openly operating with and against humans before revealing themselves at Brasnya was supposed to be a big thing). 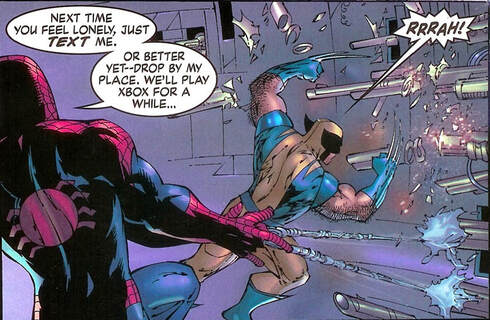 Can't believe Wolverine is angry.
One final thing to note before I can’t put off talking about the comic any more is that this was more a Marvel title than an IDW one, with the IDW editors getting a “Special thanks” over a direct credit and it being printed on the paper stock Marvel used at the time. Which makes it stranger that IDW made far more of a thing of it than Marvel, a major G1 Decepticon will make his debut in a later issue (in a comically inept way) and there is the aforementioned, if only in the most technical way, spinoff Spotlight. Marvel on the other hand would like to show you the empty room they keep all their fucks in about this comic.

The creative team are Stuart Moore (about time we had a Stuart) on writing and Tyler Kirkman on art. Both have respectable jobbing freelancer CVs, and Moore’s other Transformers comic is very good, so I can only assume time was against them here. The art especially is hideous, probably being the ugliest Transformers comic we’ve seen yet. Most notably, and hilariously, it’s even poor in-fiction as a Decepticon jet is drawn so badly that Captain America can’t recognise it as an F-22 and just calls it a “Strange aircraft”.

Dr. Doom is apparently stirring up war against his neighbouring country of Symkaria, so The New Avengers (technically they are just The Avengers, even on the copyright details of the issue), comprising Wolverine, Spider-Man, Luke Cage and America’s Ass, go in because American intervention in world trouble spots always goes well.

They find instead that Doom seems to have been overthrown and a strange big evil dome has been erected. Breaking their way in (whilst arguing amongst themselves), they fight automated defences whilst being scanned for suitability, before the only good subject of Spider-Man is grabbed by, as Wolverine so astutely points out, a car. 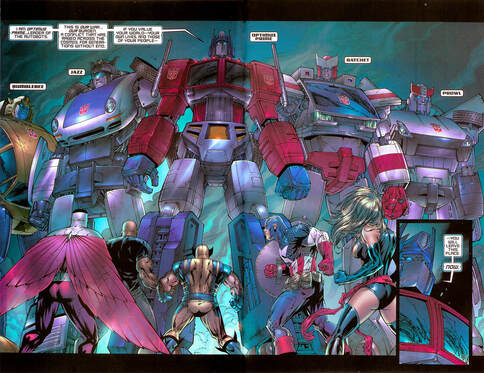 It's like E.J. Su if you broke his hands with a mallet.
They then fight their way out of the dome, before their attempt to fight their way back in is thwarted by a forcefield that would have been handy for the Decepticons five minutes earlier.

Meanwhile, Spider-Man wakes up on a bed and Megatron, at least in keeping with how he treated Koska, doesn’t even let the teenager get a question in before explaining who he is and how the building has a special ray that makes humans irrationally angry (which we’ve mainly seen through Wolverine being annoyed with Captain America, so it’s hard to see how bad an effect it’s having) and he is very interested in Spider-Man.

As Captain Marvel and the Falcon arrive (with Wolverine not liking Flacon calling Luke Cage “Brother”, someone is jealous of a certain Disney+ show. It’s been established Iron Man is too busy right now, but I’m not sure if that’s so he can make a dramatic entrance later on or to tie-in with other two-year-old comics because this is Canon), the watching Autobots, who’ve worked out the anger ray, decide it’s time to break all protocol and reveal themselves to the humans.

Though best not mention this again, ever.

Naturally, having had it carefully spelt out to him that the humans are irrationally outraged, Optimus decides the best way to approach them in a way that won’t antagonise them is to drive up (deeply confusing Wolverine over being a “Talking truck”), transform and be immediately confrontational with his “Leave now humans” spiel. Inevitably leading to the Autobots being attacked by the New Avengers.

Yes, this is a comic in 2007 that did the traditional “The two heroes fight through a misunderstanding before teaming up” crossover plot completely straight.

The double page spread of the Autobots is kind of amazing for how awful it is though; every part reveals new horrors that catch your eye and add to the overall shoddiness of it. My favourite parts are a joint tie between Optimus standing in the classic pose kids do when pretending to ride a motorbike (he looks like he’s in the middle of Richard Herring’s Motorcycle Clothing Shop Sketch. “I sure love motorcycling, VROOM VROOM”) and Prowl apparently having seem something much more interesting than a group of superheroes off to his right. 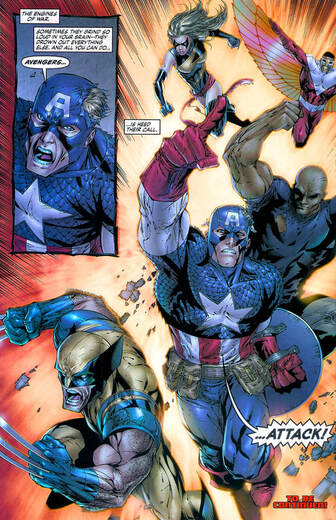 I assume Captain Marvel is less powerful in the comics than films or this should be over in about two minutes.
Though no one is actually looking in the same direction for some reason.

Though the biggest art failure is actually earlier because it makes a nonsense of the plot. Presumably the forcefield is meant to come up between the Avengers and the dome, stopping them going back in to rescue Spider-Man, but instead the art has them on the wrong side of it (with the forest on the other rather than the dome).

One unintentionally hilarious moment is that the Avengers all get introductory captions as they first appear (the Transformers only get their names), and whilst I get that if they do that for a relatively obscure character like Luke Cage they need to do it for everyone, it’s comedy gold that someone thought Spider-Man needed explaining.

I’d probably be more forgiving of the art if the story was any good, but even beyond the strange continuity and terrible dialogue (Optimus Prime call Wheeljack “Jack”), this is a comic where almost nothing happens. The Avengers walk into a building, walk out and them try to get back into the building.

Great for their number of steps, terrible as entertainment. For a comic released on July 4th the only independence is from quality control.

And yet, this was not as bad as I remembered. Just very mediocre. Have I been numbed by the later and much worse “No, genuinely this time” in continuity crossovers?

Or is the really bad stuff still to come?

I know what my money is on. There’s got to be a reason the IDW that will cheerfully keep Spotlight: Arcee in print are sheepish about this crossover.

We seem to be in a little rut at the moment, will the second issue of Megatron Origin dig us out of it? Well, if anyone can, a miner can. Find out next week... 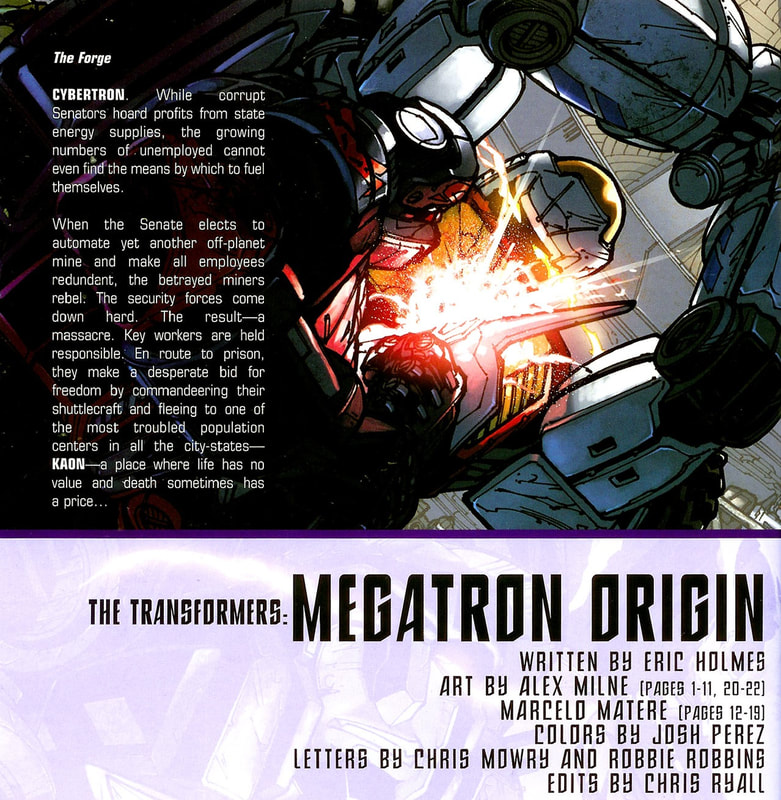