Are You a Gladiator? 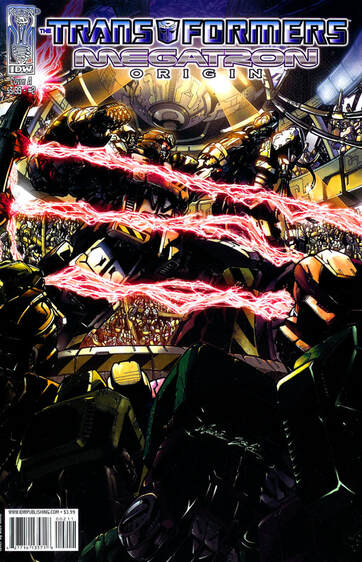 What is it, worm?

We have a fairly notable first here (for IDW rather than Transformers comics as a whole), the first issue to have more than one artist working on it. Something that will become far more common as deadlines and meeting Hasbro mandates become narrower. In future, there will be an attempt to pretend there’s a thematic or location based reason for three or even four people working on the same issue, but here it’s simply that Marcelo Matere handles the second half, outside of the still Milne last page.

As the gap between the next two issues will be slightly longer than a month (and will cross past the start of Devastation in a way that probably wasn’t intended), I suspect delays have forced the fill-in.

The opening of the issue both shows the compression from the six issue plan and how this was a Dreamwave pitch originally as a massive amount of time where Megatron infiltrates the underworld has been skipped and he’s now a gladiator.

Which is very surreal really, an idea from a never having been reprinted at this point UK Annual text story that Furman incorporated into Dreamwave (at the time considered a total artistic failure) and that makes it into IDW by the sheer laziness of buying this pitch with minimal changes. And then it sticks and becomes the default Megatron origin. 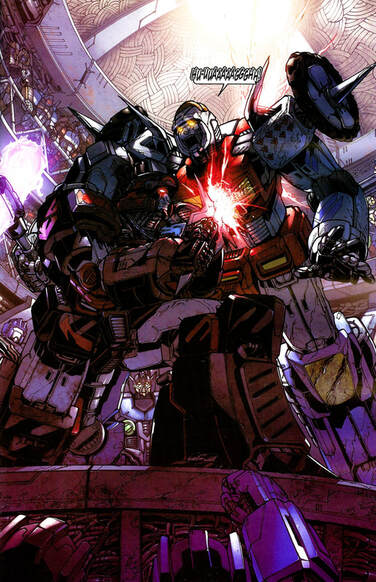 Cy-Killing in the name of.
​So I guess the book lives up to its name. Though it’s not a great transition from the story of an oppressed working class guy to the Cybertronian Giant Haystacks. We also never really get any indication as to why or how he ended up a backstreet gladiator, especially as this opening shows that despite having done it twice now, he’s still reluctant to kill (complete with traumatic flashbacks to the first time when ordered to do so). Maybe he was hoping to meet Jet?

Who he does meet is Cy-Kill from Gobots in the latest in what would become a long line of a very tired “Megatron kills Cy-Kill lol” jokes (that also started in Dreamwave), as he and his team of gladiators, after some reluctance on his part, kill the Renegade to loud cheers from a crowd of recognisable characters (including fellow Gobot Crasher and more women) that will pad out the watchers all issue.

This takes six pages, which feels a lot for a gag. The only real plot bit is the idea that team leader Clench is a tough taskmaster, pushing Megatron too far and the two are clearly heading for some sort of clash. But as Clench is killed by Megatron in the next fight we see, this feels like a nothing plot.

Of course, a great action scene can be fun in and of itself, but the art suffers from all the heavy murky and hard to follow look of the previous issue. Though it is amusing that the presence of Overlord in the crowd and the chants of “Till all are one” will get an unexpected call-back and payoff some years later.

Less referenced again though is that Megatron wears a hat with a fine head of hair underneath it, in what I think is supposed to be a nod to the victory acknowledgement moment in gladiator films, but just looks odd.

Still, someone is impressed and it’s another Dreamwave refuge idea. That Ratbat is a humanoid senator. Looking less ridiculous here than he did in The War Within: The Dark Ages, but still vaguely silly as he brushes past and aid and starts watching reports about his investments that clarify he’s a bad and corrupt guy. Manipulating labour disputes to lower the value of a company. Sneakily making a “New” (though it seems unlikely Transformers don’t have it already and then it’ll appear in later flashbacks to before this) levitation technology worth less and so on. 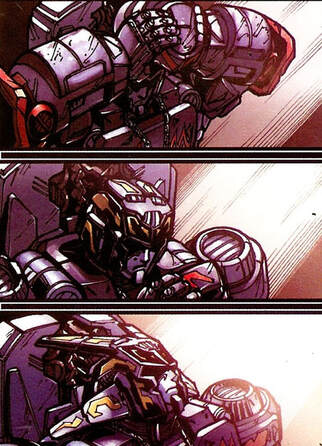 Because he's worth it.
​But what grabs him is the trade in snuff videos of the new gladiator fights, which is a roaring success thanks to this new guy and seems a great way to make a quick buck. Though later stories will make Ratbat’s “Interesting” reaction to Megatron have a whole extra subtext.

No subtext to the second gladiator fight we see, where Megatron does the turn on Clench thing. Which somehow, and I’m not sure how this works, puts him in charge of not just the team but the entire gladiator and snuff tape operation. Even though later in the issue he’s so clueless as to how the operation works, Rumble and Frenzy have to explain it to him.

Obviously, every time Hulk Hogan won a belt, he had to take on the organisational nitty gritty of the WWF. That seems an ineffective system.

And yes, my wrestling references are archaic.

We’re definitely losing something in the compression.

What the Autobots have lost is a clue, so local cop Sentinel Prime sets up an operation (Hammer) and various stakeout teams (Panorama) to find and observe potential locations for the next fight, as he’s keen to see “That one” hang.

Just batty about the boy.
​Which again, has added subtext in context of later stories, but really, what Holmes is going for is the idea Megatron is so inconsequential as anything other than the foremost thug, they’re not even that bothered about his name.

It is kind of weird that, as recently as 2007, this comic thinks the obvious way advanced robots would get hold of illicit death fights is to swap actual physical tapes. How quaint. Must be the snuff community’s equivalent of buying records on vinyl.

One Panorama team waiting to call in Hammer Time includes Bumper (solidifying the name Dreamwave gave this character as the Official one) and the originally written to be Outback but changed to the new Fastback because of Spotlight: Kup. Fudging that may be why Bumper talks about himself in the third person at one point.

Initially all they see is Marvel in-jokes like Scrounge and a homeless Dead End bot. But then the Constructicons arrive and start building the arena for the fight, rather brutally using the homeless robot as raw material by throwing him in a little mini smelting pool.

Which is a nice idea, but you have to wonder if building an entire sports arena from scratch each time is really less conspicuous than using empty buildings.

He always wanted to be well hung.
It certainly draws the attention of more than the Autobots as, when Megatron arrives, Soundwave pops up.

Giving us our first example of two different writers writing the same character in two different ways, as whilst Furman gave us Marvel Soundwave, this is firmly the cartoon speech patterns version.

Who, acting for Ratbat (though not saying so), offers Megatron lots of weapons like null rays and maces and guns that can replace a hand that’s already in Shockwave’s colour. All for just using them as however Megatron sees fit.

Which makes no sense. Ratbat doesn’t want a revolution, he wants to make money off the sports and over heavily arming one team is going to kill the game (and is presumably against whatever rules there are anyway). So it’s great for Megatron’s long term goal, useless for the guy giving him the stuff gratis.

It is lucky for Megatron that Soundwave did turn up though as he detects the two Autobots, blocks their signals and after a slightly confused fight with Laserbeak and Ravage (I think a panel of him ejecting them got drawn wrong), captures them.

Waiting for a hammer to fall.
In order to get Bumper to talk, Megatron puts Fastback on his back fast, killing him. But all it gets him is being called a psychopath. Luckily Soundwave does at least have his Marvel mind reading powers and works out the Autobots know nothing, beyond Megatron being the most wanted for the games (which is really where this doesn’t line up with the James Roberts stuff, as up till now you can just about pretend no one is mentioning all the other stuff Megatron is famous for).

With this, Megatron decides to take his revenge on the psychopath comment, violently bumping off Bumper by ripping his arm off, the issue ending with him looking down at a pool of the Autobots blood... 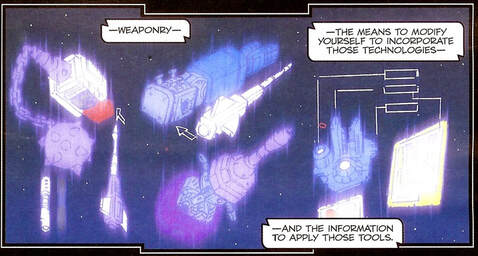 How to make IDW Shockwave cry.
​With regret? A sense he’s gone too far even though this isn’t even the first cop he’s killed? Are we meant to feel sorry for Bumper even though the first issue established he’s an agent of a violent totalitarian state and ACAB?

It sums up the issue perfectly because it feels like it’s trying to say something deep about the endless Cy-Kill of violence, but it actually means absolutely nothing when you try and think about it for more than two seconds.

That’s a mess of an issue. Both slow and skipping over too much at the same time, and with nasty art that does not sell the action scenes. The two artists mesh well, but only in the sense of doing some of their poorest work. 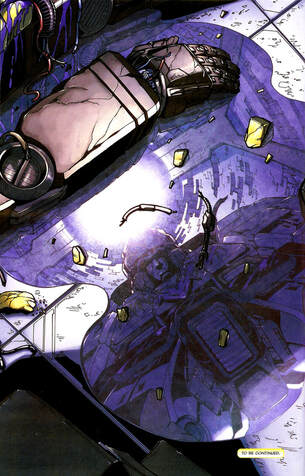 Handy.
Indeed, beyond any surface anger issues, I'd say all we really learn about Megatron here is he really loves making his own jewelry (a hobby shared with Gene Roddenberry), as he wears a lovely proto-Decepticon badge medallion. Guess he is a poet at heart after all.

It also suffers from there not being a single character to be invested in. Everyone is a nasty, self-serving piece of shit with maybe the exception of the two Autobots who are killed if you ignore what this comic said about what the Autobots are in the first issue. And this Megatron does not have the charisma a series led by a bastard needs to make them someone you love to hate.

To end on another Gladiators reference (sorry people under 30 or who don’t live in the UK. But it’s all on YouTube and it’s honestly the greatest TV ever made), it wants to be Wolf, but ends up Shadow.

Now next week, can Spider-Man save us from this continuing rut?

(With thanks to Andy Senyszyn, who gave me some good advice about using my phone as a wi-fi hotspot after my home internet turned into a disaster. This piece would not have been up on time without him. I guess we now know Eric Holmes works for TalkTalk these days)