You’re an Outlaw Once Again, Time to Change, Superman, He’ll Be with Us While He Can. 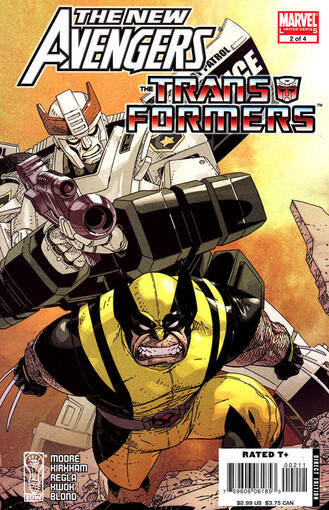 Big, outer-space robot war. Got it.

Yes, I’ve used song lyrics mentioning Superman two Marvel crossover issues in a row, I’m so contrarian. Luckily for you all, I don’t know any other songs about Superman so that’s the end of that running gag.

Issue 2 of this crossover is most interesting for who isn’t in it. Before the series started, we were promised a “New” Transformer. With the assumption by fans being it would be an entirely new guy rather than just a G1 Cybertronian who just hadn’t appeared in IDW.

Something that seemed born out when an online preview of issue 2 (in these early days before digital comics really was a thing the standard for previews hadn’t been established so it was just some “Cool” pages rather than the first handful. You can see the comparison image from the Wiki at the end of this piece) featured an entirely new Decepticon that looked like the 2007 Movie Crankcase toy. Much excitement and speculation ensued.

Then the issue came out, and on the page in question, Not Crankcase has been replaced by Thundercracker and the entirely new character turned out to indeed just mean G1 but new to IDW and was Ramjet (who isn’t in the scene at all, so it’s not like they swapped a Whole New Guy for him unless some more severe rewriting went on than art substitution).

What happened here is likely to remain one of the great mysteries of Transformers as absolutely no one cares enough about this comic to find out and it’s unlikely we’ll ever get any in-depth retrospective interviews with the creative team. As it’s basically a Marvel comic that IDW took some money for, best guess is some miscommunication between the two companies, but that is only a guess.

Based on how it reads, everyone involved might just have been on crack. 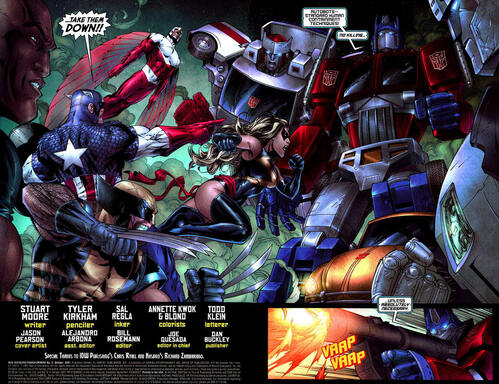 Optimus Prime's famous stun gun.
Still, at least they caught this before printing. There are times in future where IDW will have to stick characters who should have been there in the trade.

Still, that lets me talk for a page without having to get into the actual comic, so thank you random Crankcase guy, because frankly if you got out of the issue because you read the script, I salute you.

The issue opens with a surprisingly dense recap considering nothing happened last time, alongside some quick character summaries so readers can quickly know things like Jazz is communications guy for the Autobots. Famously of course.

Things start properly with an incredibly ugly two page spread that shows Kirkham wasn’t just having a bad day with the first part and includes Prime ordering that there being no killing unless necessary.

Whilst firing his big ass gun at the humans whose individual powers and strengths he has no idea about.

What follows is hugely entertaining, though I suspect not for reasons intended as we get some ridiculously hilarious moments in what is, most unexpectedly, a complete curb stomping of The New Avengers.

First, Ms Marvel (whom I called Captain Marvel last time, but the problem with her then alias in 2021 is it can cause confusion with Ms Marvel, so I’ll just call her Carol going forward), breaking into Ratchet whilst ranting about finally getting to unleash her Kree powers fully... before getting taken down by Ratchet’s airbag. 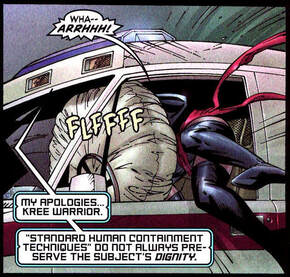 A decade later, she's a billion dollar film star.
​I really hope she was suffering from some sort of depowering at this point. Or maybe Ratchet is dangerous enough to take out Thanos.

Even funnier is that it is this comic of all comics that properly explores the potential of the holoavatars as Bumblebee uses Lyndsey Lohan to distract Luke Cage long enough to shoot him full on in the chest repeatedly.

And despite looking more like a TV image than they do in the main IDW comics, the avatar can only be detected as fake by Wolverine’s nose.

Jazz meanwhile really is close to the Marvel “Shoots flamethrowers at humans” version as he runs down Wolverine (who ultimately does do slightly better than any other Avenger by taking out some tires with his claws).

This deeply strange fight is interrupted by Dr Doom coming up and shocking Wolverine with what turns out to be the antidote to the mind control. 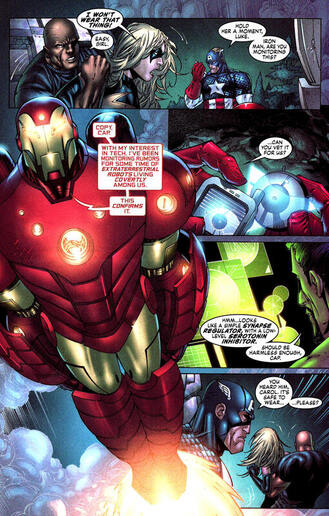 Sudden character moment.
​Doom’s role in this issue is as strange as the fight, he turns up to cure one Avenger, explain none of what’s happening is down to him beyond the Decepticons stealing his anger inducing machine and then walks away to another country to try and negotiate peace in that brewing war plot that no one remembers by this point.

Ratchet meanwhile has his own counter to the device, which like all cures for mental control is placed on the shoulder, and uses the diversion to place it on Captain America and bring a halt to the bickering.

It then turns out that both Carol and Iron Man (flying in) know about the Transformers from their adventures in space and being a tec nerd respectively but have never mentioned this to anyone before. Indeed, apparently the Starjammers have never thought to do anything about the desolate and destroyed worlds they’ve seen caused by the Decepticons.

We do however get the one Genuinely Good bit of the issue as Carol refuses the anti-mind control device and starts to kick-off again, but Captain America talks her around rather than forcing it upon her out of expediency. Which is actually a decent bit of character work.

Inside the dome we’re back to the strangeness as the Decepticons are given Spider-Man powers.

Except for new boy Ramjet (with his cone down out of respect), who Megatron does not trust, so he can go guard the anger inducing machine instead. Which makes me wonder if this was going to be Starscream before someone remembered this comic was pretending to be canon. 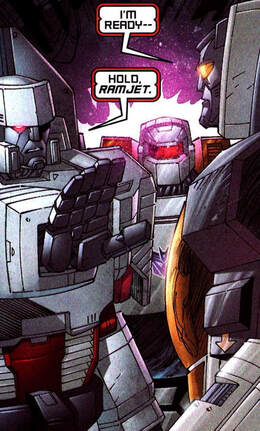 Can't wait to see what this guy gets up to.
​I don’t know if Moore actually planned this, nothing else in this comic is clever enough to suggest this, but all the seemingly serious way Megatron views Ramjet is a threat will be much, much funnier in retrospect once we hit the latter’s Spotlight issue.

Continuing his tradition of giving exposition whether you want to hear it or not (he’s certainly found his voice since the “Huh” days), Megatron explains to Spider-Man that this “Mirror response mode” is standard Decepticon policy for stealing superhero powers when a world has them and Spidey was the best candidate of those available (so I guess Carol is definitely having a bad time of it in 2007 then?).

I do wonder how one machine is able to steal the powers of any superhero regardless of their source, but hey ho.

It’s actually lucky for our heroes the Decepticons then come out and fight (allowing an “Avengers assemble!” and cut off “Roll out”), because they were having absolutely no luck trying to get in from the outside. And we get another inadvertently hilarious moment of Optimus Prime being deeply confused by Thundercracker not being shit for once.

Apparently if you give Spider-Man powers to a transformer it lets them shoot lasers. That look less dangerous than the gun Bumblebee blasted Luke Cage with. 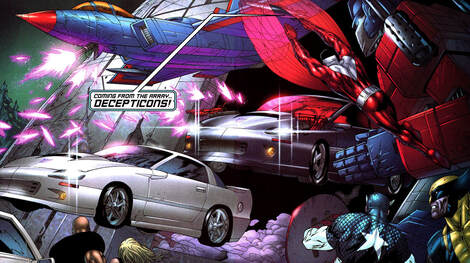 Ugly Decepticons!
Still, let's not be harsh, I'm sure having the proportional strength of a spider is going to present a challenge to someone with an airbag stronger than Carol Danvers.

Luckily for everyone, Iron Man shows up in what turns out to be a Transformers sized suit, and I can’t tell if this not being immediately obvious when he appeared earlier in the issue was intentional to maintain the surprise or just bad art. He’s certainly posing like he’s groping a pair of invisible breasts though.

The problem with this issue, outside of the terrible art and dialogue, is it starts with the good guys needing to get into the dome and by the end they’ve achieved absolutely nothing towards that. The Decepticons have to come out to make things easier for them. 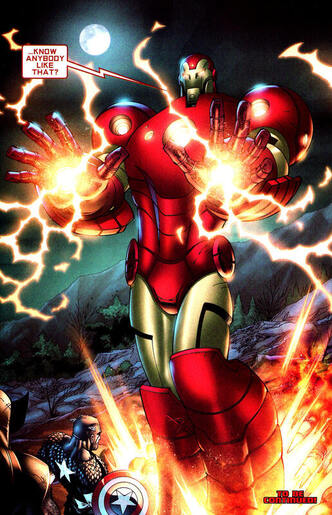 "Hey guys, I'm going to be a film star as well!"
Which is why I dislike the “Fight through a misunderstanding, then team up” stock crossover plot. It wastes time and seems especially pointless here when there’s not even a “Vs” in the name of the comic, so it’s not needed at all.

One nice moment for Captain America and the sheer insanity of the fight scene cannot compensate for what is simply a very, very bad comic.

And we’re only halfway through.

Next week, it feels something of a relief to get back to the main present-day timeline and hopefully an upswing as it’s Optimus Prime’s time in the Spotlight. 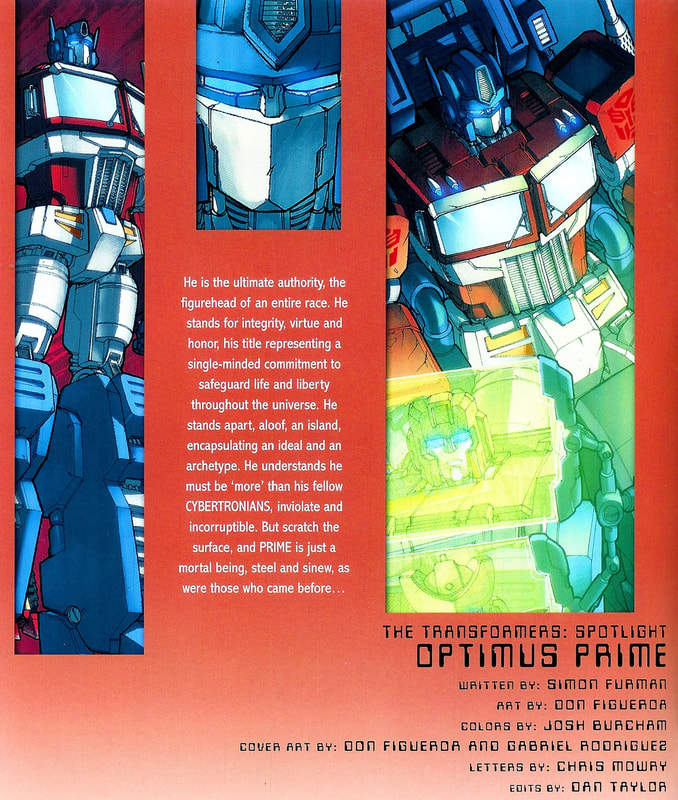