You've Got the Touch. 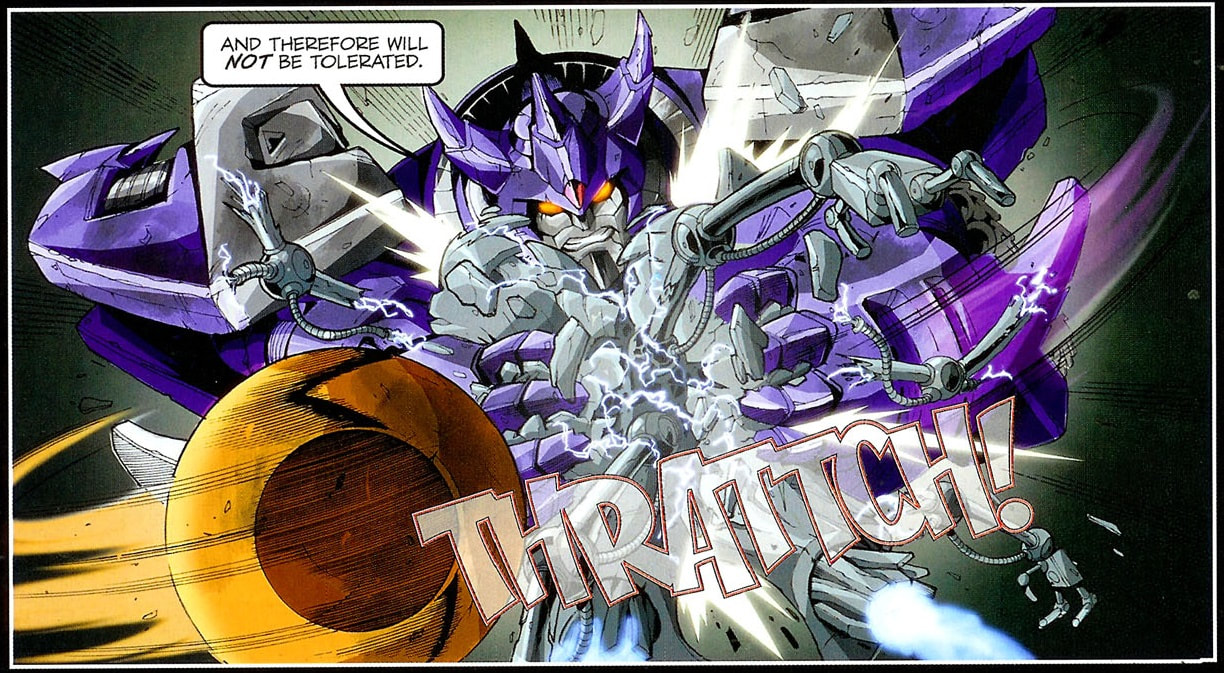 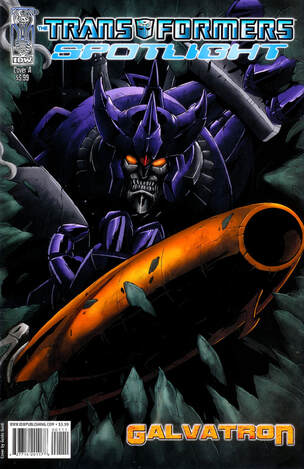 Sure, this was the hot spot a while ago, what with that whole Thunderwing brouhaha.

This was a curious one to reread, because going into (and it not having been that long since I last read it as part of the Hachette reprints), I realised I didn’t remember that much about it outside of the B plot with Sideswipe. And if you’re struggling to recall anything that the titular character of the Spotlight did, that’s not the best indicator of a successful comic.

This is especially curious as Furman is doing, in a more low-key way than we’ve seen up till now, another of his “How I’d have done it if I’d created these concepts” stories, in this case to deal with the issue of how you involve popular character Galvatron without either writing out Megatron or introducing time travel.

The answer? Megatron and Galvatron are now distinct separate characters. Which on the one hand is actually pretty sensible (especially with toy promoting days to come that would have required both to be featured anyway), but for me, I must admit to being in a minority and actually not being very keen on this. I like the idea of Galvatron being Megatron reborn, it makes him much more interesting than just The Next Big Decepticon Threat.

So maybe that’s why I’ve never completely gotten on with the IDW version, who is going to go through nearly as many unlikely additions to his past as I talked about Megatron suffering from in the last issue. But, unlike that, there’s nothing especially in his future past that makes this Spotlight unintentionally funny in retrospect, which is a relief at least. Indeed, the contradictions and oddities come more from Furman’s own later issues. 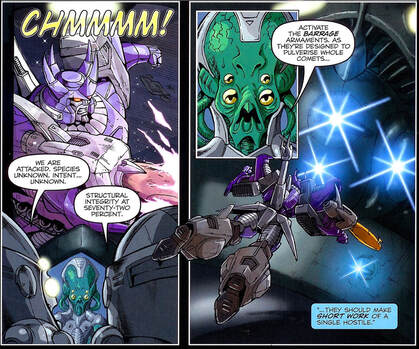 Can't believe Galvatron killed... those guys.
And the opening does try to make Galvatron as a solo entry seem as impressive as possible as in the Bezuli Expanse, an alien ship is monitoring the growth of an anomaly (the entrance to the Dead Universe) as it slowly kills off the planets around it. A fate they share much more quickly as Galvatron flies out of the anomaly and kills all the aliens.

Which sounds like a very simple sequence, but it takes up six pages and is almost totally irrelevant bar the reveal of the effect the Dead Universe is having as it grows and a few details that Galvatron drops into narration: He is the Emissary (tell that to Ben Sisko), and Someone has Something called The Darkness that has power over him.

Oh, there’s also an interesting curio in the aliens not being able to recognise Galvatron’s species, in the future the Transformers will be rather infamous amongst most space-faring races.

Devoting just over a quarter of the issue to a scene that, despite looking gorgeous (Guido Guidi on art, knocking it out of the park throughout), could be completely removed without you ever realising may be why I didn’t remember much about this one. I appreciate wanting to show the full power of Galvatron, but that could easily have been done by giving him more of a challenge upon reaching Cybertron. 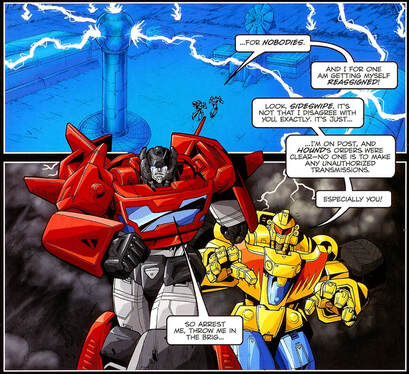 Leadfoot!
For their home planet is his destination, where (at Thunderhead Pass), we find the team assigned to keep an eye on Thunderwing and the now confirmed to be in Stasis Lock and not dead other Decepticons is small and includes Sideswipe and beloved Generation 2 character Leadfoot.

Ah, good old Leadfoot. Can’t wait to read about his many, many adventures to come.

Sideswipe is pissed, he considers this a nothing assignment now Thunderwing has been taken care of and is so determined to go to the action on Earth (and more importantly Sunstreaker, something that will become more important later on), he calls the planet directly to demand Optimus Prime himself listen to him, all whilst Leadfoot objects.

Smart Leadfoot, he’s playing a careful game here. Be interesting to see how it plays out in the long term.

Despite the claims Earth is where the action is, things are actually quiet enough there that Ratchet has taken on a second job as receptionist (and found time to paint his head TV colours after it had previously been Marvel red), answering the SPACE phone and patiently explaining Optimus Prime has taken the weekend off (see his own forthcoming Spotlight).

Doesn’t really sound like much is going on in the Sol system after all. Though as the call is cut-off by Sideswipe’s unit leader Hound, Jimmy and Verity turn out to be alive and complain to Ratchet that they could do with a Sideswipe right now as finding Hunter seems to have stopped. Which forces Ratchet to explain they’re between miniseries and therefore the plot cannot advance till Devastation starts.

What worries me is the two humans have now been in the same clothes for weeks, even after a gassing. How much do they stink at this point? 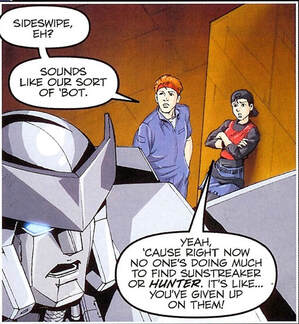 Boy, if you think Hunter is being mistreated now...
It’s also the first really overt sign of the failure of the Spotlight series as a spotlight. If you’re not a regular reader, if you’re just dipping in and out and got this one because you love a big purple throbbing beast of a cannon, none of this will make any sense or be of any interest. Whilst the overall Dead Universe thread in the issue is arguably the same, at least it’s presented as motivation for the character, there’s no reason for Verity and Jimmy to be here other than to do a bit of work for the main miniseries.

Hound also turns out to hate diversions, and in front of the rest of his team (Skram, Road Rocket and Warpath) tries chewing out Sideswipe. Only to be bluntly told “Much as I don’t wish to undermine your authority, I will continue to do everything in my power to get myself back in the thick of it”.

I think Chris Langham made a similar boast.

There’s also a lovely touch in the art of Warpath being utterly shocked, and you know something has gone wrong when Warpath thinks you’re coming on too strong.

Elsewhere, Galvatron has arrived (considering the alien sensors at the start could detect him, security really is extremely poor here) and muses on how long it has been since he was last on Cybertron. Before war (those future retcons will make that a bit rich), before chaos (lucky sod if he skipped that comic) and—upon seeing a Decepticon logo on a wall—before factions (again, a bit rich considering what we’ll learn about Cybertron’s past later).

We've all worked with that guy.
This leads to a melancholy flashback to the launch of Ark-1, adding to what we learnt in Spotlight: Nightbeat by revealing it was an intentional mission to the Dead Universe portal, the Prime having been drawn there by the Matrix he carried.

Which is a sign of Furman’s original plan (that the aforementioned Darkness would be revealed to be the turned evil Matrix), but future changes and compressions will forcibly retcon this, though I can’t now recall if it will ever be explained how Nova followed the call of the Matrix if he never had the real one.

It’s also revealed that, in a twist on Optimus Prime’s actions in the first Marvel issue, as the Ark-1 crew (which unfortunately includes a guy who looks like normal Thunderwing, creating needless confusion) studied the anomaly, Galvatron feels an overwhelming urge to press the button that will take them in.

This trip down memory lane is interrupted by Leadfoot. 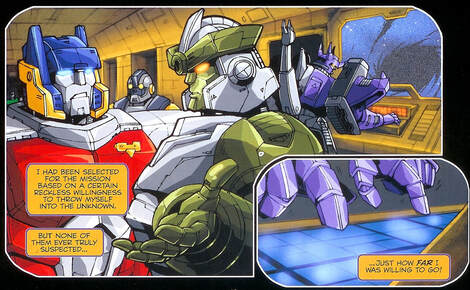 Turns out Galvatron can kill you with a touch (I write this as Crafty Wank is trending on Twitter, and that’s one thing Galvatron never dare do), draining the life from Leadfoot in seconds.

But he feels sad about it at least.

As is Sideswipe, who is also pissed off enough to go pile diving in on Galvatron with enough noise to bring the other Autobots running.

For some reason they then get very hung up on Galvatron not having an insignia logo on him, and whether he is a Decepticon or not. Which seems a strange thing to be confused by in the middle of the fight, especially as in the entire issue, only Skram and (briefly) Warpath have a visible Autobrand. Which makes me wonder if Team Hound just sit around all day, looking at themselves in the mirror and going “I DON’T SEE AN INSIGNIA ON ME OMG AM I A DECEPTICON”.

No wonder Sideswipe wants out. 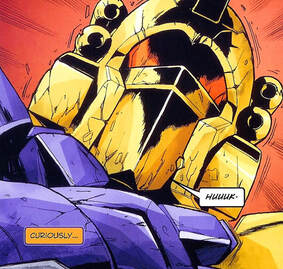 noooooooooooooo
He also wants to take revenge on Galvatron (now standing in a fire that wasn’t there a panel before) for poor, sweet Leadfoot and takes down the Decepticon with a headshot. Which annoys Hound who wanted a live prisoner for interrogation, but that seems a bit OTT as there was no prior moment of ordering a no-kill.

Luckily, despite a pleasingly gory head explosion (with a flying eyeball in tribute to Time Wars), Galvatron just gets better. But even though he’s been told to kill anyone who sees him, he decides to take a small act of rebellion by just knocking them all out.

Well gee, thanks for deciding that after breaking the hearts of the Leadfoot fan club.

On Gorlam Prime, Galvatron arrives at the pool that claimed Nightbeat and meets the same emerging figures (so, err, did he have to kill everyone on the planet who saw him fly into an excavation in a city, or did he only pretend with them as well? Why not go back the outer space way he came through if secrecy in important? Or if the inhabitants are already frozen as we’ll see the next time we visit them, why not go this way both times?), and he’s pleased his small act of rebellion shows some of his destiny is still in his own hands. Unlike his contemporaries, who are dead. And he should know because he killed them by pressing that button. 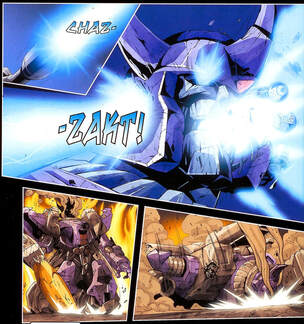 The eyes have it.
Oh, and he’s also brought Thunderwing with him.

So, did he fly through interplanetary space carrying Thunderwing? Makes you wonder why these bots even need spaceships. Though the panel of Hound discovering Thunderwing is gone at the same moment is absolute comedy gold.

This is probably the most carried by the art issue yet, despite a few oddities like Wrong Thunderwing, Guidi does gorgeous panel after gorgeous panel, especially as he’s not yet shoved into the pigeonhole of “Guy who draws it like the cartoon”, meaning he gets to have some fun with some Japanese Manga influences on Galvatron, especially in the fights.

But the story is just nothing. Maybe about three pages of advancement on the overall plot (if you’re being generous) and, worse for the format of the series, it’s not a great spotlight on Galvatron as you don’t really learn anything about him, the first outright failure on that in the run. 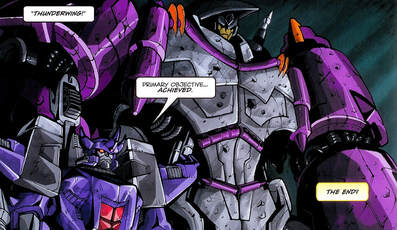 Now there are two Thunderwings.
Perhaps that might not have been so obvious if Prime had actually left decent security around Thunderwing and the issue had been about Galvatron breaking through each line of defence, demonstrating the range of his full powers against actual Transformers. But instead, we waste a lot of time on aliens we have no idea of the actual strength of (is it impressive Galvatron takes them out or not? It’s a science vessel after all) and the opposition on Cybertron is five characters that can’t stand the confusion in their minds if you forget to put the badge on that day.

It’s not even substantial enough to be bad, it’ll just be forgotten again by the time I finish writing this sentence.

Hmm, what was I saying?

Well, next week, it’s a comic that definitely has no problem with being substantial enough to be bad as it’s the first issue of a miniseries crossover with Marvel that no one seems to want to keep in print. Enter, the New Avengers. 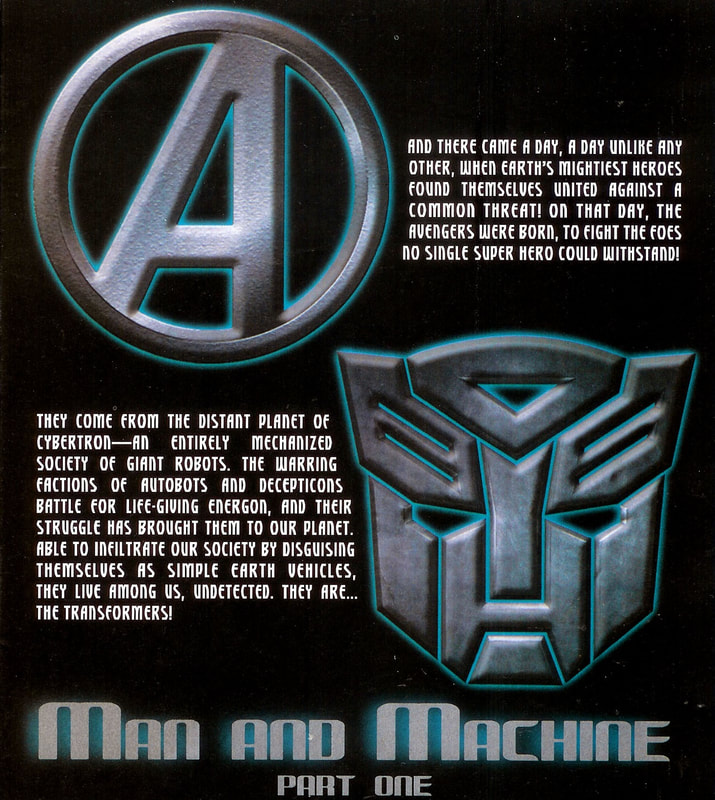