‘Cos if you Want the Best Ones and you Don’t ask Questions, Then Brother, I’m Your Man. 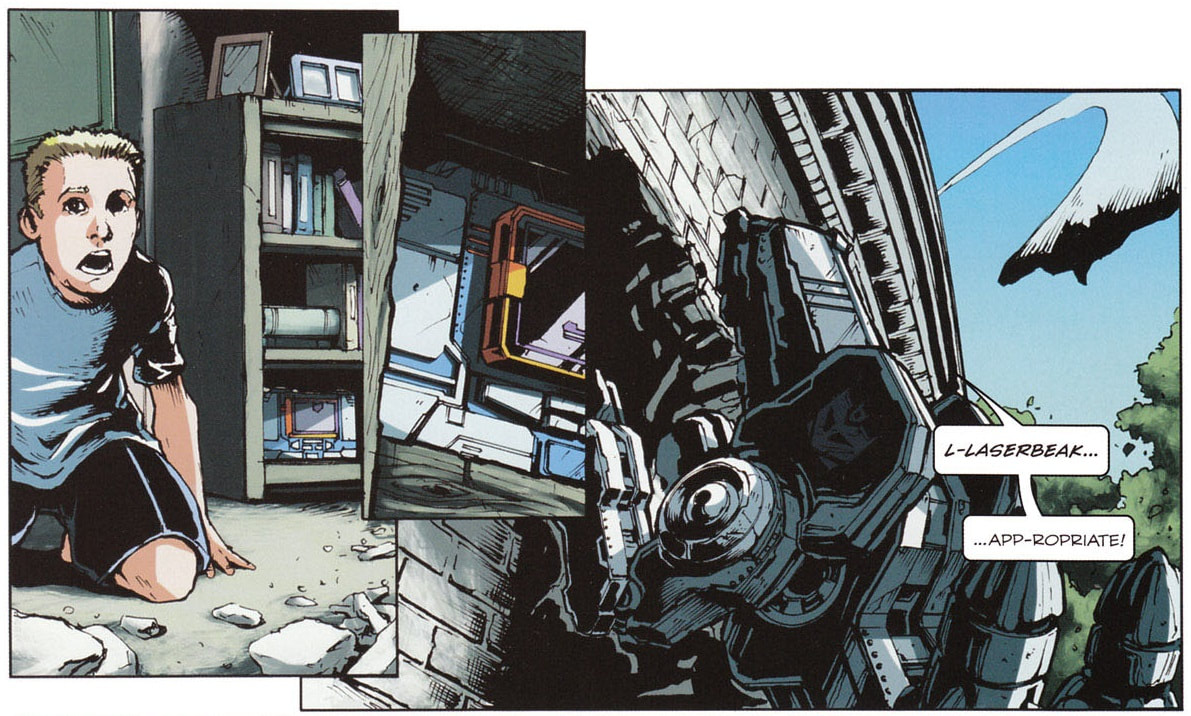 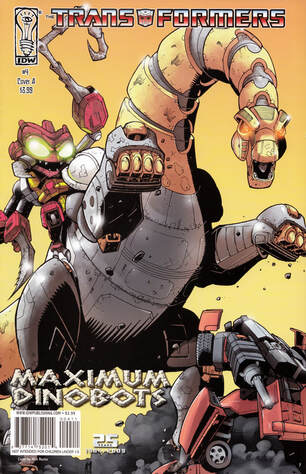 Truly, your hubris knows no limit.


From the first page, even if you haven’t looked at the credits, you immediately know there’s something different about this issue. Something that I suspect the reason for which is indicated by it having been six weeks since the last issue (I wouldn’t be surprised if IDW had been hoping to get the Furman era done and dusted before the next lot of Spotlights, instead there’s going to be a crossover between them), Nick Roche is an exceptional artist, but he is not the fastest artist, or at least was not at the time. I believe every run he has on Transformers that lasts more than two or three issues needs either a supporting artist to come in and help out, or there are severe delays.

Which is not a criticism, Transformers is clearly a tough title to keep on top of (as we’re seeing on the other book is also the case for Guido Guidi), and I’ve said before that is a shame that IDW in this period do not treat the artist as irreplaceable as the writer and accommodate them better.

But the decision to split the art duties on the final two issues of Maximum Dinobots seems to have been a fairly late in the day one. Unlike on All Hail Megatron there’s no attempt at a thematic or even scene-based split, it just seems to be that the secondary artist has been handed a bunch of pages at random.

And that artist is James Raiz. Whom we haven’t met before at IDW, which is perhaps surprising as he was the initial lead artist on one of the best received Dreamwave books, Armada, the same title that gave us Guidi. And it’s odd IDW, the company that has promoted Shame McCarthy as a major Batman writer, wouldn’t jump on the chance to shout “NUMBER ONE BEST SELLING COMIC ARTIST” in press releases (yes, Transformers: Armada was a number one selling book thanks to a series of unusual circumstances not worth going into right now). 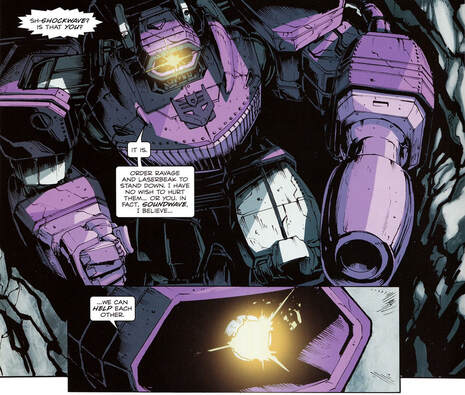 He's pleased to see you.
But, for whatever reason, even though he’ll be doing odds and sods till the end of this continuity, Raiz is going to be someone who drifts in and out with occasional work, all with the feeling that he’s the last second guy being called in for an emergency quick job after the more usual suspects turned out to have their phones off.

Which is a shame, as I do like his stuff. I find it riveting.

Literally. For some reason he covers Transformers in lots of rivets. However, even though he tends to make everyone look terrifying, I do enjoy his work. But there is a problem, in that his dense detailed and, yes, rivet filled art is completely at odds with Nick’s clean sharp Geoff Senior inspired lines. Without them handling distinctly separate sections, these last two issues are going to have a lot of visual whiplash. To the point where, at an Auto Assembly convention I was at around the same time, Nick admitted that if there had been time to think about it, it would have been smarter to give Raiz the whole of this issue to draw whilst he himself did all of the 5th, rather than try and mix and match.

Which if nothing else, means the opening of the issue plays to Raiz strengths, as Ravage (who is more chatty here than he has been previously, if not as eloquent as he will be), smashes through the wall of the boy Jim—committing to his love of 80s retro by having a Snake Eyes toy, so explain that Habsroverse—so that Laserbeak can grab Soundwave. Leaving the boy’s mother as baffled as a good old fashioned befuddled Budiansky bystander.

The cassettes decide to take in the view from Mount St. Helens (in terms of differences between editions, the original apparently has it in Portland, the Hachette version I’m using corrects it to Washington), where Soundwave has is almost out of power and fully out of ideas. Luckily, a Shockwave with what can only be called a massive phallus for a gun arm, has a proposition about how they can help each other. 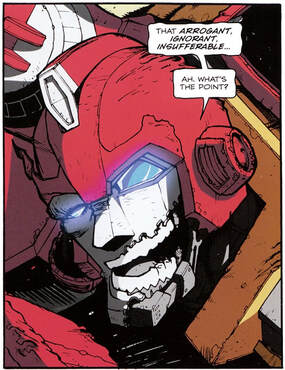 When you see Mike Costa on the horizon.
Team-ups are the order of the day as Hot Rod literally falls at the feet of what turns out to be, after some initial confusion , the real Sunstreaker. But, whilst Hot Rod wants to call in the big hitters to help take on the army inside, Sunstreaker (who is clearly meant to be overriding Hunter at this point), doesn’t care as he thinks he’s got the perfect disguise to pass unnoticed amongst the Headmasters, making him march past his too battered to do anything about it colleague.

Which gives us a genuinely funny moment, one that only becomes more so in retrospect, of Hot Rod being put out that someone is being an insubordinate dick to him as he decides he’s going to have to put the call out himself. Which turns out to be a good idea, because as Sunstreaker strolls through the Machination base talking out-loud to himself about how he has to stop this because a little more of him is dying the longer he keeps being pulled in different directions, a big claw looms into view behind him.

Aboard the Monsterbots ship, we’re back to, if not quite padding, then at least stuff of no consequence, as Grimlock and the three wacky renegades attempt to sort the issue's second bit of Del Boy style wheeler dealing in exhange for further assistance. This basically boils down to Grimlock offering them all of Shockwave’s secret files that he downloaded from the Decepticon’s ship before they destroyed it. 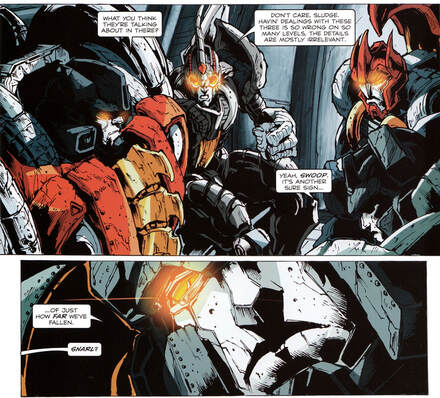 Raiz, not afraid to make a having a conversation moment look sinister as fuck.
Which is something that sounds important, but that the Monsterbots have all of Shockwave’s secrets and just need to decode them will never, ever be mentioned again in all the many circumstances it could have come in handy in the future.

In the next room, the “Each issue is a focus on a Dinobot” thing gets even more tenuous as it just means it’s Snarl’s turn to be vocal about how they’re now renegades and Grimlock hasn’t been honest with them. Honestly guys, make your minds up, one way or another.

The funny look this gets Grimlock when he walks in having done his backstreet trading is cut short however, as Hot Rod succeeds in sticking a plug into his own innards to booster his internal comms, sending out a signal (that causes extreme pain, it’s really not his week), but reaches both the Monsterbots and, via some relays, a familiar looking ship in deep space.

Meanwhile, Sunstreaker is continuing his clever plan of passing as a Headmaster by walking about and talking out-loud about not being a Headmaster, which gets him blasted clean through the stomach from behind by a very smug “How stupid are you?” Scorponok. Though it’s a smugness that doesn’t last very long as he realises the head is missing from the body.

You do get a real sense from this whole issue that Furman is amping up the misery on Sunstreaker to make the betrayal during All Hail Megatron seem more of a natural progression. 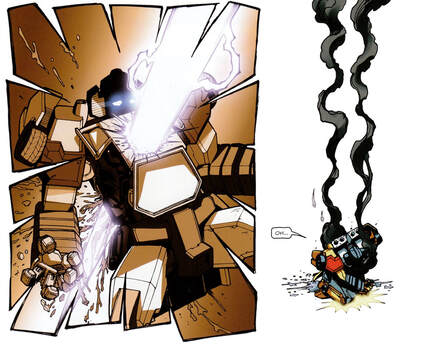 When you eat a dodgy curry.
Scorponok’s day then continues to get worse as Dante calls in to tell him a Cybertronian ship is on the way, so it’s time to Gerry Anderson’s Stingray the building as it turns out to be full of hidden weaponry and defences.

As the Monsterbots arrive, the Dinobots try asking Grimlock why they’re even bothering to do this, but it’s all more padding really as they end up jumping out to join in the fight anyway, having again decided they’re a team and it’s better to go down fighting. Which they do, as the Monsterbots use the ship’s weapons to take out the defences, meaning the Dinobots only need to take on the Headmasters.

Leaving you realising that, if Furman had just left the Skyfire more operational, the Monsterbots could have been cut out of this series entirely.

As the Dinobots fight, a deeply in pain Hunter is able to avoid the hunting Scorponok and make it to Sunstreaker’s real head. Where he apologises to Sunstreaker, but this is the only way, and maybe a better way considering how Sunstreaker is suffering, and he pulls the plug.

So if he’d done that the first time Sunstreaker asked back in Devastation, we could have skipped this whole series. 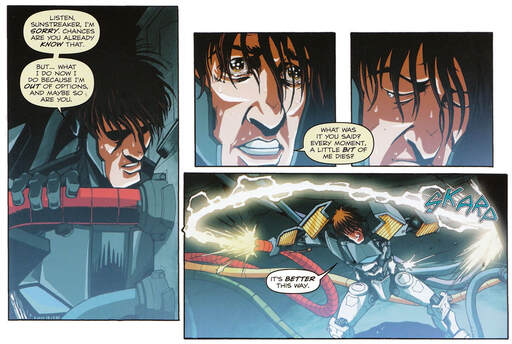 "Better than being in the other book"
But, it’s still a powerful moment, one that looks to end the Huntstreaker story on a dark and downbeat note.

Thanks to the logic of The Phantom Menace, killing the control centre of the robots also kills all the robots, meaning the Headmasters all collapse. Though, at least the connection was set up, unlike the similar moment in the first Avengers film where all the killer drones lay down and die at the end because someone realised it was the end of the film.

Hot Rod tries to explain that it looks like Sunstreaker has pulled the plug on himself, but all Sludge cares about is that they’ve won, till he becomes the second character in the issue to get shot through the stomach by a now incredibly pissed off Scorponok.

You've been Sludged.
At this point you’re meant to think both Sunstreaker and Sludge are dead, but unfortunately the moment is rather undone by us already knowing that one of them is going to make it, and therefore that blast isn’t as lethal as it looks.

But before anyone can process any of this, Shockwave decides to show up for his revenge on the Dinobots as well. Which can only make Hot Rod go “Oh brother”.

The cliff-hanger is then the reveal that the other ship seen earlier is indeed Ultra Magnus’, and he’s coming for Scorponok, with only one of them walking away this time. 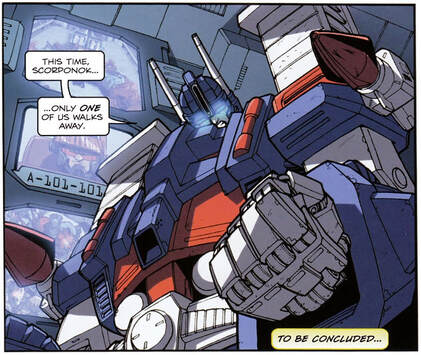 Magnus will leave you walking funny.
Everyone is really bearing a grudge this month. What’s interesting is, based on the screen behind him, Scorponok’s case number is A-101-101, which sounds like a very low number (in fact, it sounds like the number you’d give the first case on file, Scorponok must have been on the run for a long time before the Magnus Spotlight), suggesting it’s something he had to dig out of the Magnus Archive.

By itself, this is mainly a chess-piece moving issue to get everyone into position for the final fight next issue, and to remove more irrelevant threats like the Headmasters. It does it in a perfectly solid way, despite some more pointless back and forth over Dinobot loyalties, but definitely feels like a step down from the third part, which was in turn a step down from the second.

But compared to the issue of All Hail Megatron we just had, this is high art and leaves me much more well disposed to it than I remember being. Whilst the conflicting styles between the two artists does make it a jarring read, I’d also take that over the more partitioned, but considerably worse, art of that issue as well.

So perhaps a qualified success, but still something of a success and it leaves me more optimistic for the final part than I was expecting to be.

Next week, it’s time to shake things up with the ultimate Jazz mag. 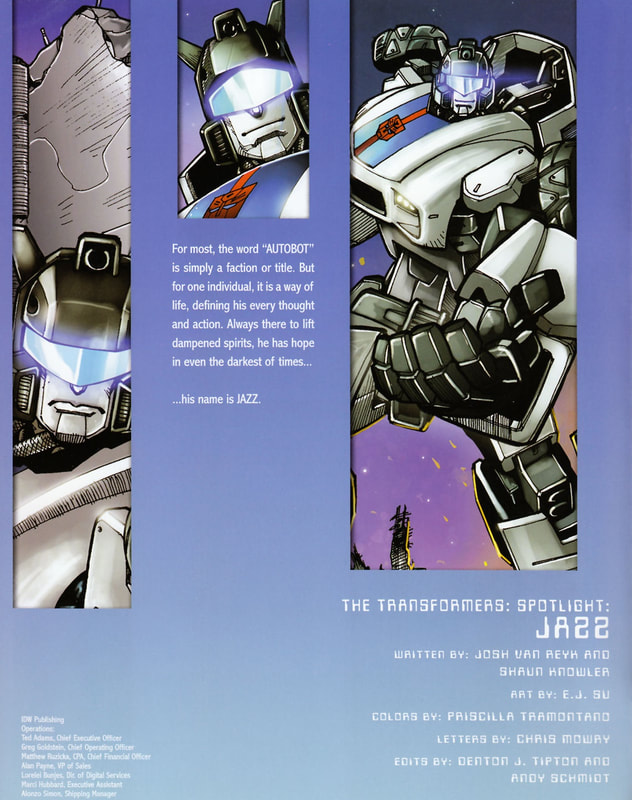