My Kind of Razzmatazz, and it has, all That Jazz. 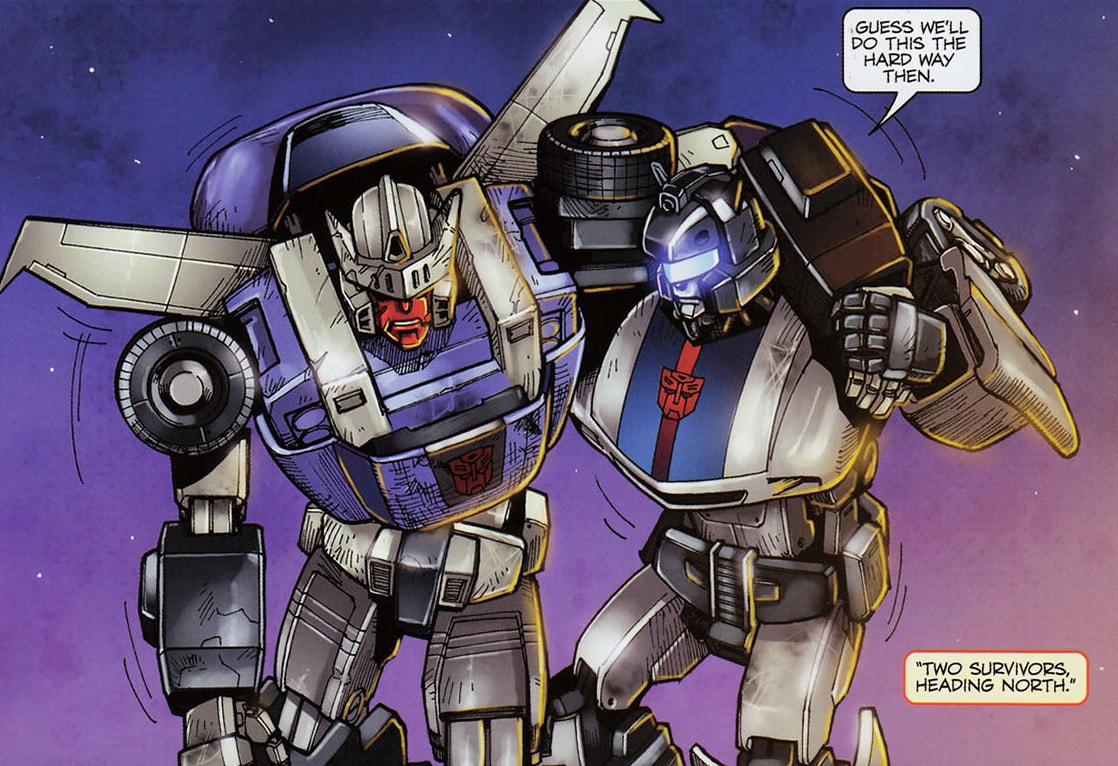 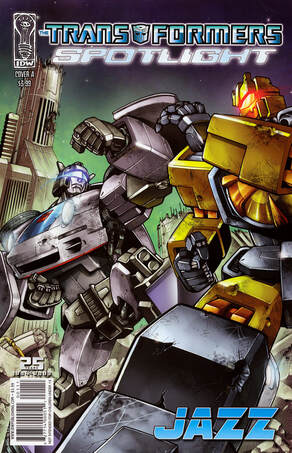 And what do you know about it, Commander Wax-N-Buff?


And welcome to Revisitation Sundays! With my new job and hours, I’m going to try doing this on God’s day (I’m not saying I’m Jesus) for the foreseeable future, though as I work out my new shifts, that may change again. Which all basically means you get two of these in three days, you lucky people.

Scheduling seems to have been a cause of debate for IDW in 2009 as well, something that’s easy to forget now we read these stories in trade. It had been five months since the opening issue of this run of All Hail Megatron related Spotlights, with Blurr in the November of 2008, an odd and lengthy gap. That the next after Jazz is going to follow hot on its heels as the next issue in April, definitely suggests something had gone wrong behind the scenes.

Something backed up by Jazz being set fairly early during All Hail Megatron and that that aforementioned next issue, Drift, would have made sense coming closer to his actual introduction.

But, if there was stuff going on behind closed doors, it must have stayed very much behind closed doors, because the Wiki doesn’t mentioned any announced delays to these issues. The other possibility of course is that Blurr was originally going to be a one-off (after all, the All Hail Megatron branding was only added for trade of this run), but that seems unlikely considering how trade conscious IDW were at that time. All in all though, definitely a sign of turbulent times at IDW towers. 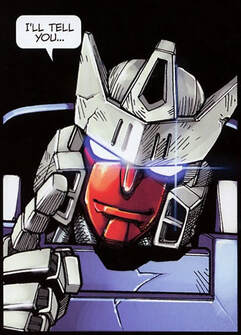 "This is a story, all about how, my life got flipped, turned upside down..."
As for Spotlight: Jazz itself, there’s two notable creative things about it. The first being that it's the first, and one of only two full (though as we recently saw, he’ll do odds and sods along the way), issues drawn by E.J. Su since his tour de force on the final Revelations issue. And his work here is very odd. Not bad, the panels are fine and dynamic and it all looks good, but none of it feels very E.J. Su, as he was trying something different. Perhaps working with the All Hail Megatron designs required the stretching of some different muscles? Though we are only a few months away from another Fan Favourite Artist trying a different style with far more disastrous results.

The other is that this is the issue written by the creators and curators of the Mosaic project, Josh van Reyk and Shaun Knowler. As I’ve said before, IDW seemed far less keen to cultivate far writers in the same way they do fan artists, with every one that comes up during this original continuity having some outside factor helping them (Nick Roche having come aboard as an artist first, James Roberts having been Nick Roche’s mate), and it this case it seems to have been the result of wanting to thank them for their work there, and very much a one-off as it remains their only Transformers comic work (Indeed, the Wiki doesn’t mention any other pro work for either of them).

And perhaps unsurprisingly for two writers who’ve spent the last few years cultivating fan fiction, it’s a story about stories. Indeed, in something of a break for the format, it could just as easily be Spotlight: Tracks, as he is the narrator who takes us through the adventure and has far more of an arc than the titular character. 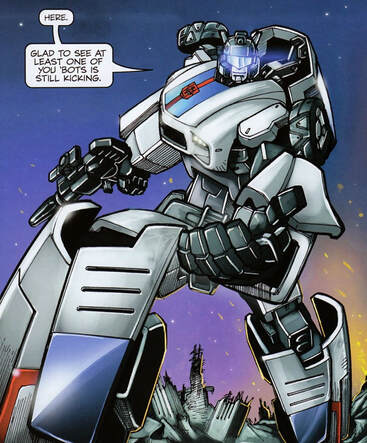 Jazz hands.
On Cybertron, before Kup’s team arrived, nerves are stressed and frayed amongst the Autobots, with Cliffjumper especially taking his rage out, first on a wall with his fists and then with his tongue on Bumblebee.

Not like that, I mean verbally. Mind out the gutter.

Which is when Tracks interrupts them, pointing out fighting won’t help and that they still have hope. Which is cheesy, but oddly Cliffjumper mocks this not for the sentiment, but because he doesn’t believe the vain Autobot (in the only reference to the cliché of Track’s personality in the issue. Possibly the whole of IDW?) has ever gotten his hands dirty. Which is  a strange thing to leap to from what Tracks actually said, but it allows the blue Thunderbird to offer up a story...

Back in The Old Days, on his first combat mission, everything goes wrong for Tracks as his entire team are dead and he’s been blinded.  Which makes for an interesting narrative device, is story is being told to us from a subjective point of view, but we’re seeing things objectively as we know the first person to find him and come to his confused aid is actually Jazz.

And yes, there’s a certain irony that of all the Autobots we could be asked to at least entertain the idea of Tracks not recognising by their voice, it’s Jazz. Who probably has the third most famous (and imitated) voice in all of Transformers, behind Prime and Soundwave. Maybe Tracks thought it was Hong Kong Phooey. Could be. 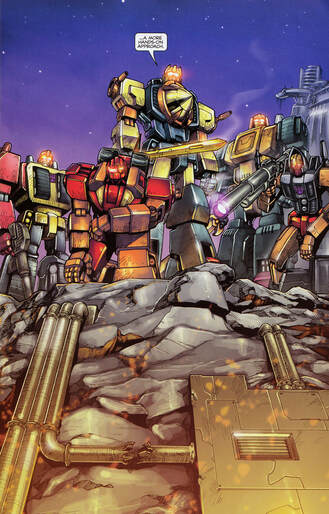 On the hunt, they're after you.
The telling thing, is Tracks starting to ask if That Bloke From The Shining is a friend... before switching mid-word to “Autobot”. He’s clearly scared, out of his depth and in need for someone to cling on to. And luckily it’s Jazz.

Jazz is there with an extraction team... who are then also shot down and killed. So, as Track’s “Transition Cog” is broken, they’re going to have to walk out.

IDW Transformers, probably at the behest of Hasbro and Brand Synergy, will eventually embrace the original cartoon term “Transformation Cog”, but for a long time that was considered very silly, so transition is probably an attempt to come up with something more “Serious” sounding that won’t stick. Though I know a few people who’d pay good money for a Transition Cog.

Watching them go are the Predacons, who are rather neatly written to lean into the noble hunter, Most Dangerous Game style stalkers, who don’t just go for the easy kill because they enjoy the chase. Which is a handy and neat way of dealing with the issue of how they could just kill their prey now with no fuss and end the issue here.

But the issue isn’t really about the chase, but the conversation between Jazz, who without any hesitation decides to use his own power core as a bomb to set a trap (having decided running won’t work), and the scared Tracks. And in particular, that Jazz is a calm, efficient and inspirational force to be reckoned with. The sort of guy who wouldn’t snap under pressure and, say, shoot a random human. 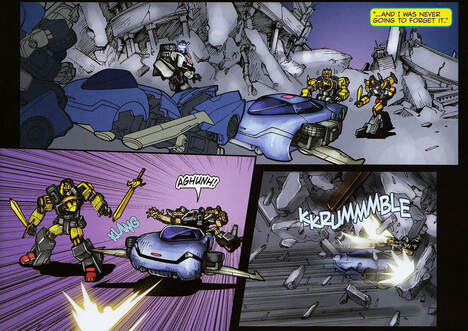 How droll.
Not that Tracks is initially convinced of this efficiency when Jazz tells him the plan: The blind Tracks will go out as diversion. But, getting a talk about teamwork does the trick, and, not sounding convincing to himself, he tries to look threatening, calling the Predacons “Terrorcon rejects”, in the last time anyone remembers the Terrorcons are supposed to be a joke.

Which gets a nice incredulous and humorous reaction from the ‘Cons, till Jazz attacks from behind, then grabs Tracks on the hood of his car mode, driving them off with three of the Predacons in pursuit... till they run into the bomb Jazz has set for them. Much to Razorclaw’s annoyance at his own men being so stupid.

Which still leaves two healthy enemies Vs one blind and one power core-less opponent. Those odds leave Tracks still feeling pretty panicked, till Jazz tells him that’s enough, good people have already died trying to rescue him and their badge means something. It’s a promise, to the people of Cybertron and the future. They are Autobots and they don’t lose hope.

Which is where we cur briefly back to the present, to see a far bigger crowd is listening to this story than just Bumblebee and Cliffjumper. 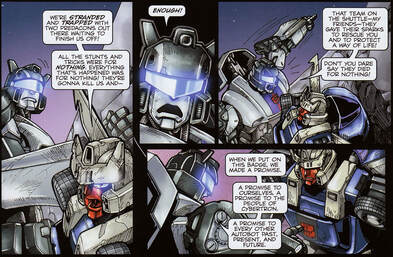 Is this bit of Track's story what inspired Ironhide to beat off Mirage's badge?!
Back in the day, Jazz reveals his plan: Attack the two remaining Predacons by himself so Tracks can escape.

But thanks to all those pep-talks, Tracks is now prepared to take a stand, and as Jazz goes forward, he (who I should say isn’t completely blind, more he has sub-Geordie from Star Trek pixel-vision), turns to flying car mode (which is understated, but means when he thought he couldn’t “transition” earlier, it was just his own fear that was making him feel that) and smacks out Divebomb.

Which also knocks himself out, meaning he can only imagine the epic-smackdown Jazz gave Razorclaw, fighting till the Decepticon’s better health gave him the upper hand... just as a ship with Ironhide comes in to the rescue. 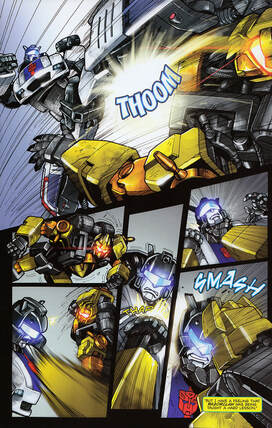 SMASH
Later, Tracks asks Ironhide who it was that rescued him... and is passed on the message that it was just an Autobot, just like him, and not to forget what that means.

In the present, now all the Autobots are listening (including Ironhide, though oddly that he knows who the mystery Autobot is does not get bought up by anyone), fully entranced and happily distracted from their woes. Which doesn’t really lead into the contemporary events of All Hail Megatron, though Su does try to square the circle by having Sunstreaker glancing shiftily at Mirage (who unfortunately is looking jolly... well, jolly) and Ironhide looking serious (though he gives Tracks a friendly pat on the back later).

Prowl goes outside to where Jazz is standing where we first saw him in All Hail Megatron, and he’s clearly in on who the subject of Track’s story was as he does some face-pulling as Jazz mocks the one-guy beating all the Predacons idea. But once back inside, and with everyone cheerfully obeying his get back to it orders now they’re re-energised, he takes the time to thank Tracks, because they all needed that boost, even him.

Now, this is definitely a comic by people writing their first professional full length gig. In particular, that you have an unreliable narrator is something the story basically does nothing with, you can imagine more experienced writers playing with structure would make more of a thing of what Tracks thought was happening through wearing rose tinted glasses over his blind eyes and what Jazz was actually doing in reality. 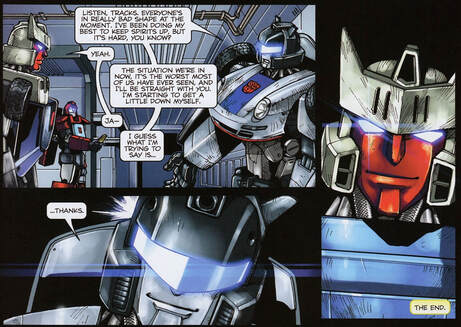 "Glad to get you back on Tracks"
But, it’s also an extremely promising debut. Whilst you can pretty much predict everything that’s going to happen, the sincerity through which the Tracks and Jazz relationship is played is extremely well done (and lasting, a lot of Tracks future role will be based around him not giving up on someone, no matter what) and with enough sincerity to carry you along. And for all the framing device is both cheesy and doesn’t really fit with the comic its set during, seeing the Autobots all come together for a good story is actually extremely welcome after they’ve been such a mess for the last year. As a calling card for more gigs, it’s an excellent one and that IDW never gave them another shot is a great shame, what might they have done with a bit more experience under them?

Certainly better than some of the stuff we’re about to get.

But next week, it’s that unexpectedly rapid next Spotlight, making you wonder if IDW are drifting. 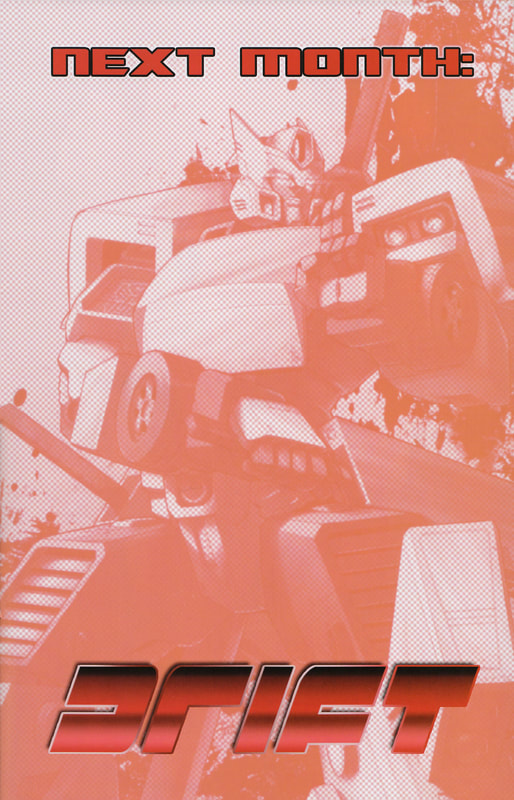