Should I Stay, or Should I go Now? 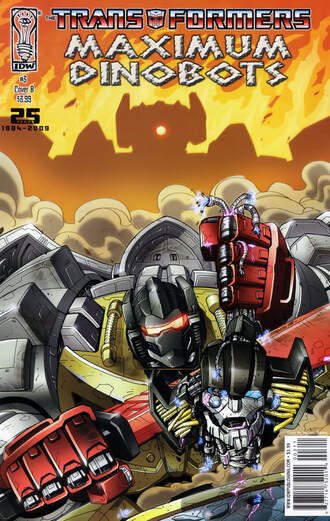 
Fine. Frag you all. I don’t need you. I never needed you. From now on, it’s all about me, Grim—OHK!


Best not do much of a preamble this week as I’m writing after just learning the Simon Furman written comic adaptation of Revenge of the Fallen comic has become part of a LGBT book banning in an American library (there’s probably a German word for that), so better get this done fast before people start burning Maximum Dinobots for being communist.

No, this time, Shockwave has his own mind, but it has a bomb in it. And he’s been given 24 hours to go after the mind controlled... etc. etc. or it will be detonated. It could be the longest day of his life.

Shockwave is helpful in giving everyone’s real names (one wonders why he didn’t before), and then points out as he flies off that he could do a lot of damage to “this insubstantial world” in 24 hours. Which doesn’t sound very logical considering it completely tips his hand (singular) that he gives no fucks, but Agent Red and the Skywatch people just look a bit worried rather than just immediately activating the bomb. Let’s hope nothing goes wrong this time, hey? 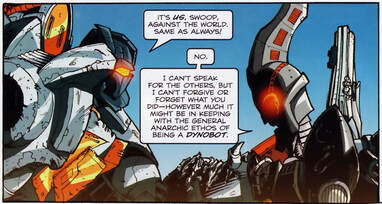 "Plus, the Rocketeer called and he wants his look back"
As the Headmasters blast their way into Fallon, Scorponok decides to order them to only attack Grimlock once they reach the centre, just out of curiosity over what will happen after the revelations of the previous issue.

What is happening is padding. You would assume from his impassioned speech last issue, that Grimlock had succeeded in talking the others back round to being a team and it’s now time for them to get down to business.

But instead, as Grimlock frantically plans to get them all off the planet by using some “Expertise” to fix the Skyfire (which will take some fixing considering how it looked like it exploded two issues ago), the others just stand around looking moody. Fantastically moody, because this is Nick Roche art, but not actually doing anything.

Finally Swoop, who is the “Focus” Dinobot this issue, speaks up and... basically repeats all of Slag’s spiel about betrayal from last issue, even whilst having to acknowledge that what Grimlock did was “In keeping with the general anarchic ethos of being a Dynobot”. 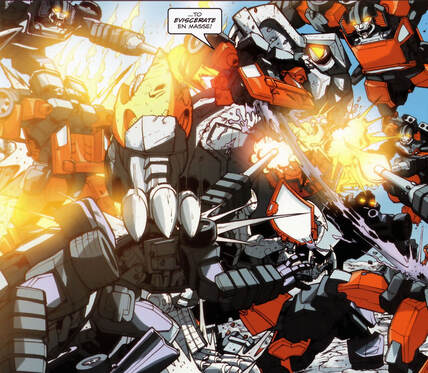 Red shirts!
A sentence that not only doesn’t sound very much like Swoop, but doesn’t sound much like something anyone would ever say out-loud. Swoop is so annoyed at the bridges having been burnt he flies off, and as the others turn their backs on Grimlock, he has the best gag of the issue, quoted above, of declaring from now on it’s going to be “Me Grim—“, something he doesn’t get to finish as the Headmasters finally arrive and shoot him mid-sentence. That a direct hit to the chest is something a Dinobot can just shrug off is something to remember for next issue.

Grimlock is delighted to have someone to do extreme violence to, and lays into the Headmasters with glee as his ex-teammates... watch. In a weird and creepy way.

At Machination HQ, Hot Rod, for no readily apparent reason, repeats all of Scorponok’s plan for the Machination Empire tm (Furman really wants to convince you of that idea) back to him. Up to now, a lot of the heavy monologues have felt intentionally tongue in cheek, but this is awkward and undisguised bringing readers who missed the last issue up to speed stuff. That in a writing for trade era, feels very creaky.

In Fallon, to no one’s surprise, the other Dinobots decide to join in because they are still a team, with even Swoop returning, but on his terms.

Now, everyone loves a good Han Solo moment of the person you’d thought had left swooping (ahaha) back in to save the day. But you need a bigger gap that five minutes between exit and heroically saving the day, enough time so that you can forget about them so it can become a surprise. Here, it’s just Swoop being indecisive and wasting the reader’s time. 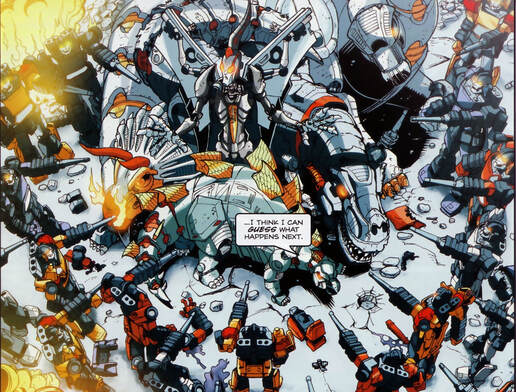 Maybe Swoop was better having run off.
Even the gang all together aren’t enough though, and as they’re surrounded by Sunstreaker’s, Scorponok orders “Execute”...

Which is a nice mini-cliff-hanger to cut to the real Huntstreaker as they arrive as the Machination base. Where Hunter calls for a time out and a separation as Sunstreaker is too determined to go in guns blazing. Which is odd as he’s been the more reluctant and cautious partner up till now, but maybe Furman is trying to show him as more desperate to segue into his All Hail Megatron role. However, Hunter uses his casting vote of Sunstreaker not having a head if he doesn’t go along to spy the place out first, and wait for an opportunity.

Back in Fallon, we actually get a good example of what is, if not quite the full Han Solo (as these characters hadn’t appeared before), at least a decent approximation as the Dinobots are going down fighting, with Swoop even apologising to Grimlock as Grimlock apologies to him and says at least they’re all together “One last time” (prescient as this story is the last chronological time all the Dinobots will be together, more on that in two issues), when new combatants enter the scene.

In particular, an Autobot shuttle, out of which jump the Monsterbots!

Which is how you do it, we’d had it established Grimlock had called in some dubious characters for help (and it had been alluded to in a more subtle way earlier in the issue than just having Hot Rod repeat exposition at us), but long enough ago that it’s not what you were automatically expecting to see. 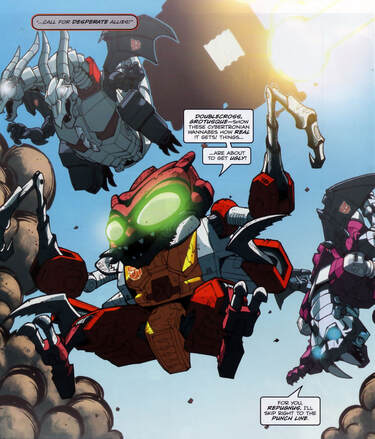 Boys, boys, boys, looking for a good time.
It’s also fun, in a similar moment to Autobots realising they’ve been rescued by Decepticons in Generation 2, to have the Dinobots embarrassed they’ve been saved by these mavericks, before being slightly worried that the Monsterbots regard them as fellow outlaws, a question Grimlock quickly deflects for now.

And in retrospect, it is very, very funny that the Monsterbots are introduced here as even more dangerous rule breaking bad boys than even the Dinobots, but after this story, the extent of their roles will be to stand around in the background of crowd shots like meek and mild team-playing regular guys.

There’s also a very funny gag of the Headmasters deciding they’re not being paid enough to be massacred. Which doesn’t really make much sense in the context of the concept—everyone of them has undergone irreversible cybernetic surgery, that’s way beyond hired mook territory—but I love a good, self-aware henchman joke.

Hot Rod is also having a great laugh, being in hysterics as Scorponok’s plan fails because he was stupid enough to base it around the predictability of the “Dynobots”. Which finally annoys Scorponok enough that he’s had enough of an audience, ordering two Headmasters to take him outside and kill him.

Which feels out of character not to just do it himself, and it will be a choice he’ll regret as, with the two guards thinking Hot Rod is so weak it’ll be a mercy killing, he instead goes “Flame on”, heating his own body up till it erupts with fire and kills the two guards. Though in his already battered state, he falls down and can barely crawl onwards. He’s going to need help, and as luck would have it, Hunter is watching all this from the fence. 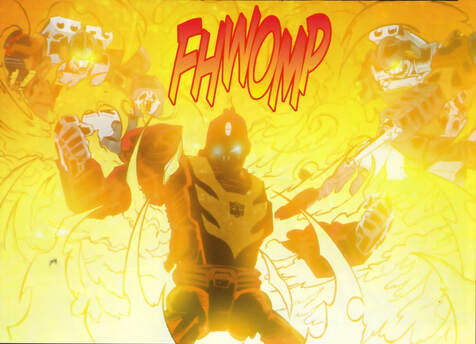 It burns burns burns, the ring of fire.
Now, normally I’d be annoyed at a Transformer being given a whole new never before mentioned superpower to get out of a spot, but at least being a literal hot rod is an idea that works for... well, Hot Rod. I suppose I should really keep a note of all the times in the future this would have been a useful thing to do before he finally remembers he can do it, about a decade in the future, and doe so for a second and last time.

Shockwave meanwhile, has gone straight to Oregon (tracking the signal that’s blocking Skywatch’s control of Laserbeak and Ravage) and found the house Soundwave is in. Where he sits on the shelf next to a copy of Eugenesis by James Roberts.

Which is our second getting James Roberts’ name in there in two issues. Considering Roche was trying to get his old mate aboard—and we’ll soon be seeing the fruits of that—I wonder if this was some sort of subliminal campaign on the minds of editorial. 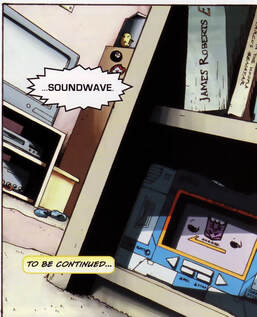 It would be Starcadia Quest today.
There are definitely still things to enjoy in this issue. The art remains stunning (and some of the moodier moments almost feel of a piece with the James Raiz art we’ll see next issue, like Roche knew it was coming and was trying to create a bridge in styles), there’s some nice dialogue and jokes, plus the Monsterbots finally getting something substantial to do in Western comics is more than welcome.

But, whilst certainly not as bad as what we’re seeing in All Hail Megatron, the plot does somewhat stumble in its forward momentum by repeating the Dinobots’ teenage strife stuff in a way that never feels convincing. So still a more solid issue than I remembered, but a worrying sign of things to come.

Still, having seen Hunter in fine health here, next week it’s back to the future with All Hail Megatron and a very different cameo from him. 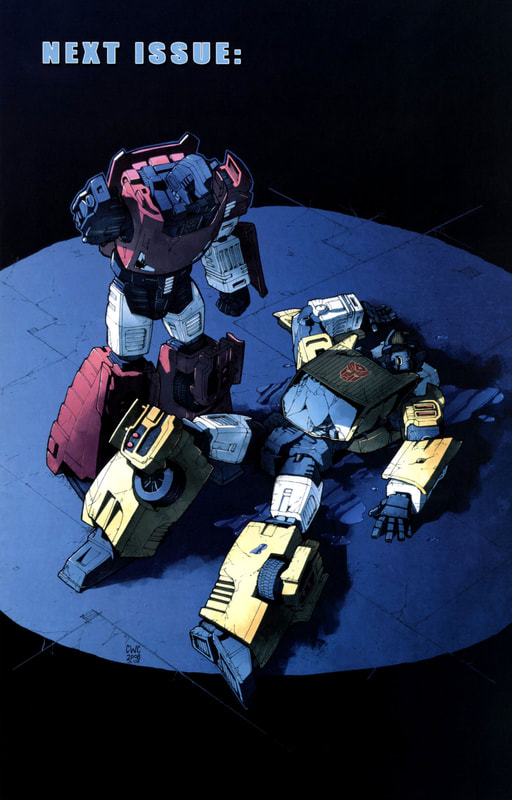