I Swear I Been Betrayed, One too Many Times, too Many to Count. 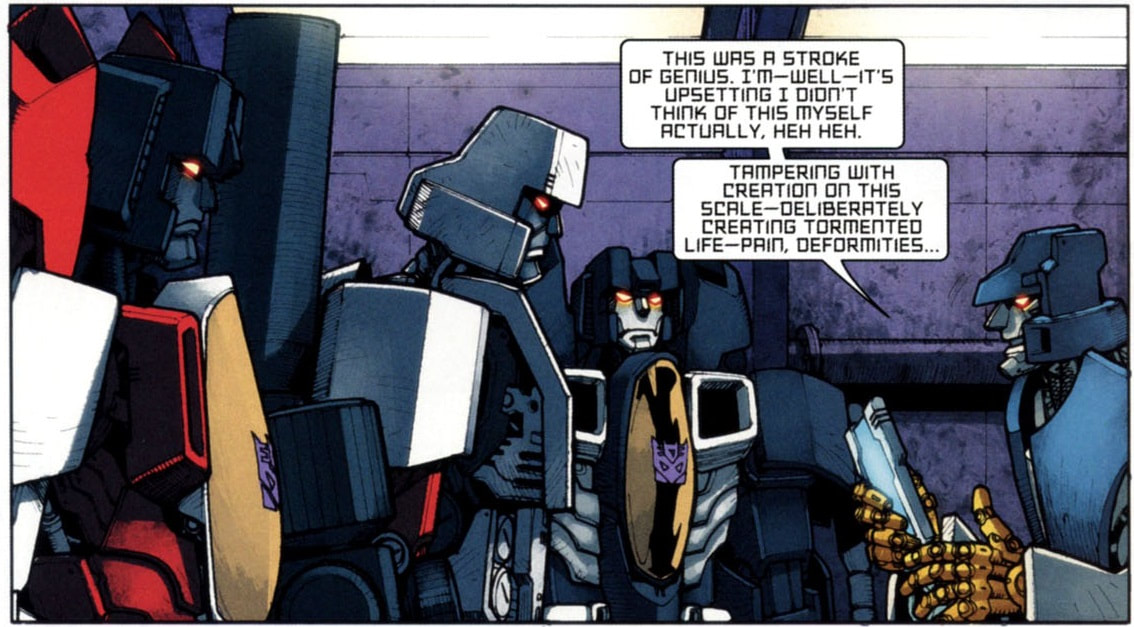 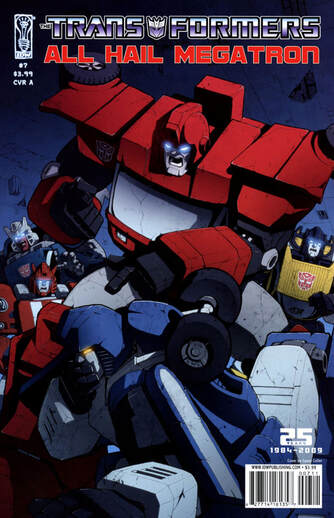 
There’s something that really bugs me about the opening of this issue.

Literally that is, as there’s a full page splash of Swarm creatures, locked in a room and trying to get through the door.

Though this isn’t, as you may think, them attacking the Autobot base, but a flashback to previous events on Cybertron. Something that becomes immediately apparent as you turn the page and realise it’s all drawn in the distinctive style of E.J. Su. Which is, again, a clever way of dealing with the need to use multiple artists, as he handles all the flashbacks in this issue to just after the end of Devastation and the end of his run. It’s smart, thematic stuff that, even if this issue does not have his best art (I definitely think it feels a bit rushed in places compared to his usual standards), it’s still a nice idea and it’s always good to see him back.

And Su being on art isn’t the only surprise appearance, as the opening reveals the Swarm, and then the three regular Insecticons we all know and love, were the creations of mad Decepticon scientist Deluge.

You know Deluge, the Generation 2 toy? One completely at odds with the everyone from 1984-1986 (and Drift) line-up of the series? Apparently it was specifically a McCarthy choice, but I don’t know if that’s because this was that random weird toy he had as a kid, or because the character was doomed and he wasn’t allowed to kill of someone you care about (hence Dirge being the other sacrificial lamb we get this issue). 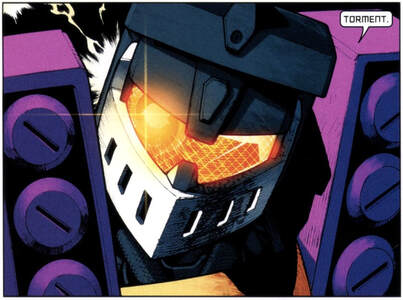 The 2020s be like...
The most interesting thing though, is as Megatron walks from the room where the Swarm are locked in to the one where he meets Bombshell, the accompanying Thundercracker is clearly outraged by what they’ve done to their own troops (the idea the Swarm are brutally experimented on Decepticons will never really come up again), calling out Megatron for it and walking off in disgust, despite Skywarp trying to calm him down. And that Skywarp cares at all at this point makes a nice contrast to his more disdainful attitude last issue. Actual character development!

The grounding of Thundercracker’s discontent is probably the best part of the issue, and important for future developments, but the final part of this first flashback—where Megatron meets the newly created Bombshell, who declares his purpose is “Torment”, leading Megatron to delightedly take him off to meet someone—is also nice and creepy.

Our return to the present, and Guido art, neatly sums up the plot momentum on the series to date as the Autobots are driving about aimlessly with no clear direction. Last issue they were supposed to be clearing out of their base because the Swarm have found them, but during the drive, we’re only told they’re going to “The base”, and I’m not clear if they mean a secondary Jazz base, Kup’s base or swinging around back to their own base. But the place they end up in is indistinguishable fro their previous headquarters—a big grey desolate building—so it feels rather a wasted trip. 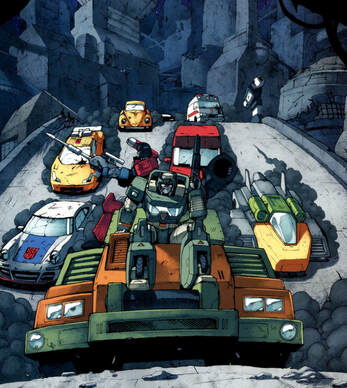 We're on a road to nowhere.
I appreciate the trying to break up the scenes of Autobots talking with a visually different environment, but the need does rather show up how much talking there has been in this action comic. It rather reminds me of how in Star Trek (and the movie Insurrection is especially bad for this), characters would have important meetings whilst pacing down corridors to desperately make it look like something more interesting than having a conversation is happening.

And the conversation here is between Kup and Jazz, as the later explains how they came to be there with more Su flashbacks. Which rather shows up the lack of plot progression as everything we see (“We were betrayed, the Decepticons twatted us with Devastator and dumped us here”), he’s already told Kup in less words. I’m all for showing and not telling, but it’s supposed to be showing instead of telling, not both. And quicker versions of these flashbacks could easily have been incorporated into the first time he explained this.

So the more interesting thing is that with this flashback, All Hail Megatron fully becomes a completely different book to the one it started out as. What was a soft reboot that was verging on semi-hard, is now suddenly incorporating and depending on the Furman stuff, abandoning the supposed new readers this was supposed to bring in, in favour of trying to appease the complaints of the existing fanbase.

So, in the aftermath of Revelation (that the Autobots abandoned Earth previously is one of the things that is still ignored), having Optimus and Megatron on the same planet has upped the scale, but at the same time stalemated as the ‘Cons have gone suspiciously quiet. 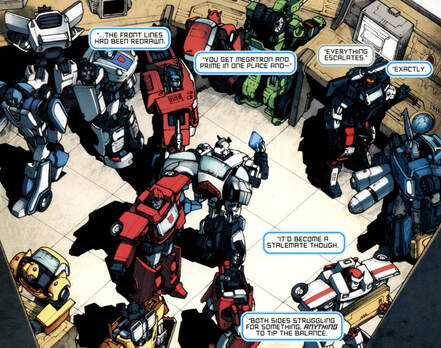 "Everyone look busy"
And it’s here I have to apologise, I’ve been saying for months that the Decepticons’ Furman plans would never get any sort of resolution, but as part of this reformatting into a continuity heavy book, we actually do get an explanation for what happened with the whole facsimile thing.

Just stopped doing it for no obvious reason.

Well, no wonder I didn’t remember that.

Still, after a long period of frustrated inaction, Mirage (and it’s a nice touch that Jazz hesitates to say it was them), brings in information from a spying mission that the Cons have fallen into two squabbling camps after another Starscream coup, meaning the perfect time to take them all out by all the Autobots going to a quarry to... kill them all or something. And for some reason, as they prepare to set off, Jazz has the most high on crack shit-eating grin on his face. Though Sunstreaker looking especially gleeful is probably more important.

At the quarry, it turns out to be the world’s most obvious trap, but even with the Decepticons fighting in a more unified way than in any recent time (for no reason I can fathom, it may be a dig at some of Furman’s writing though), Prime still nearly pulls a victory out of the bag, before Devastator arrives and so badly beats everyone that Megatron is able to rip the Matrix from the Autobot leader (whilst having a sneaky grope of his firm man-boobs). 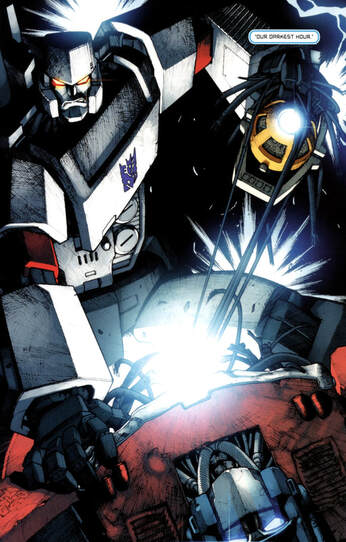 "Very tight.Like a tiger"
They are then told that they have been betrayed, which is treated as the most shocking and horrific thing that has ever happened. Which is presumably why Bombshell’s previous appearance has been ignored, as thanks to Beachcomber, we’ve already had one Autobot traitor and the prior, know existence of mind control makes the claim it was done willingly hard to take seriously.

Like any good supervillain, Megatron won’t just kill everyone, instead he’s going to throw them through a brand new Decepticon teleportation device (oddly, very carefully not called a space bridge. I expect that before the changing of the plot to acknowledge the Furman stuff—and we also get a line about how Cybertron is still poisonous, they just don’t like to talk about it—this whole battle would have happened on Cybertron instead), that will deposit them on their home world to be eaten by the Swarm for lols.

But Prime somehow does some sort of last stand that destroys the portal, but fries himself in the process. But with the plus side, that Deluge and Dirge are the only Decepticons to come through with them, and it’s implied neither gets chance to feed them to anyone (though, surprisingly considering IDW seemingly hate the Coneheads, Dirge will return down the line).

Back in the present, the Autobots have arrived wherever they were going, and the continuity gets more nuts as Sideswipe and Sunstreaker try and have a conversation, starting with Sunstreaker telling his brother to stop following him about. To which Sideswipe says he’s only doing so because he’s worried, unleashing a full page montage flashback of Hunter, Scorponok and Headmasters, summing up the trauma that Sunstreaker has been through which, in Sideswipe’s eyes, has badly affected Sunstreaker and is something he needs to face. 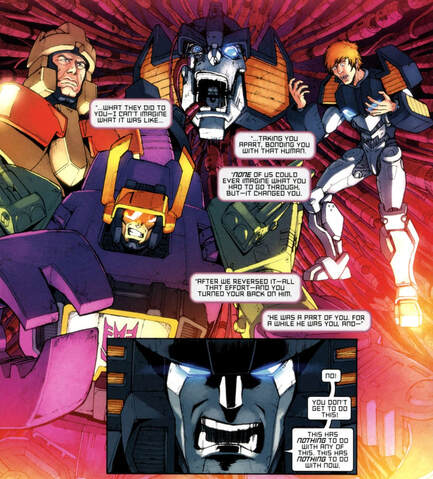 No one was expecting that.
Again, there is absolutely no way that when McCarthy was writing the first issue with its “What are these robots?” moments, he intended the entire plot to swivel (and it will) on the events of the Furman run in a way that barely makes sense if you haven’t read it. The desperate appeasement of the fanbase going on here was a bad mistake as it creates the worst of all worlds, a comic that goes from alienating old readers to alienating new ones. It betrays an utter lack of conviction in the relaunch that is only going to get worse.

Sideswipe is also keen to beg Sunstreaker to “Stop it”, turns out the yellow Lambo has been Ironhide’s partner in crime in whipping up suspicion against Mirage and it’s dividing the team too much. Which just makes an angry Sunstreaker demand the red Lambo STFU about both this and all that Furman ever did to him before storming out.

Now, SPOILERS, Sunstreaker is the traitor, and later stories (and indeed, later issues of this series) will treat him as an unknowing patsy, a tragic character who will eventually get some form of redemption for something they only did because they’d been through such a bad time. 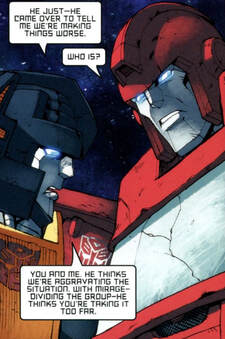 Where's your big spoon, Sunstreaker?
So it is interesting that, in contrast to that, Sunstreaker is far more sneaky and manipulative here in putting all the heat on Mirage. Including going straight to Ironhide and winding him up by telling him everything Sideswipe said, making sure to have himself look faithful Team Ironhide (“I didn’t get a chance to stand up for you...”). Creating the inevitable situation where Ironhide finally goes to have it out with Mirage.

To which Mirage points out that Ironhide is nuts, that he just reported legitimate intelligence he overheard and it’s not his fault it was disinformation and him not being a big war nut doesn’t make him a traitor.

All good points, but thanks to Sunstreaker and his big stirring stick (plus his own issues over not having protected Prime), Ironhide simply beats the crap out of Mirage, including literally punching the Autobrand off him.

Which means the issue at least ends on a bit of plot development. 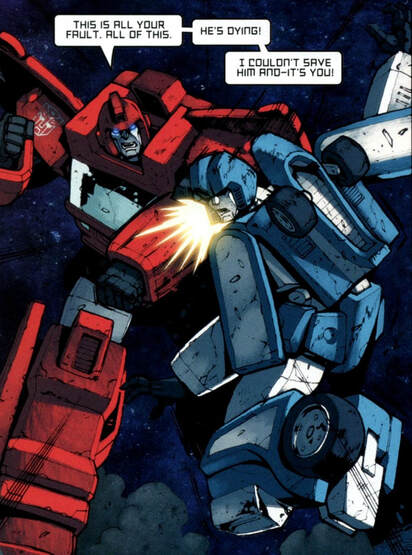 He's in a Mi-RAGE.
This is probably the poster-child for a nothing issue. Whilst none of the individual events are out and out bad, outside of some development for Thundercracker and the Mirage situation finally boiling over, absolutely nothing happens here beyond more laborious explanations of things we have already had explained to us, and that in a better series would have been explained to us visually the first time around. All whilst effectively undermining its own soft-reboot goals with the reliance on old plots.

To be honest, the Autobots driving around to go nowhere is such a perfect metaphor for the comic, I’m not sure there’s any way I can sum it up better than that.


Next week, back to the Furman era and a chat between Shockwave and Agent Red. 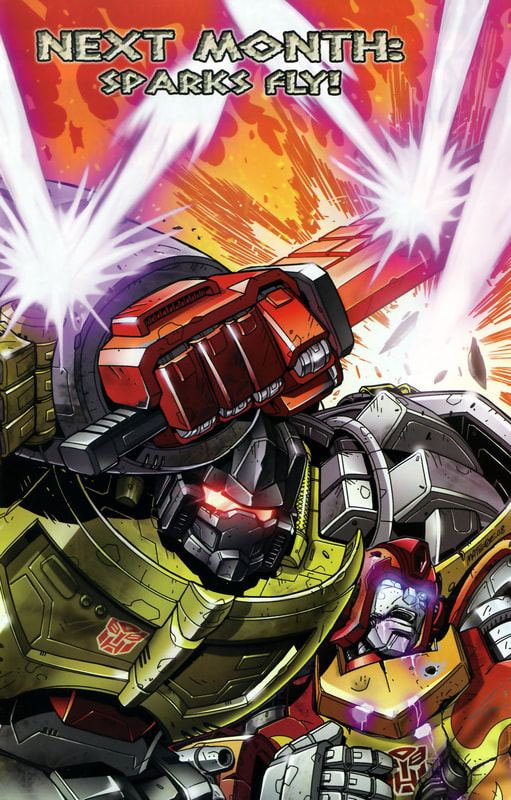