So Need Your Love, So Fuck You All. 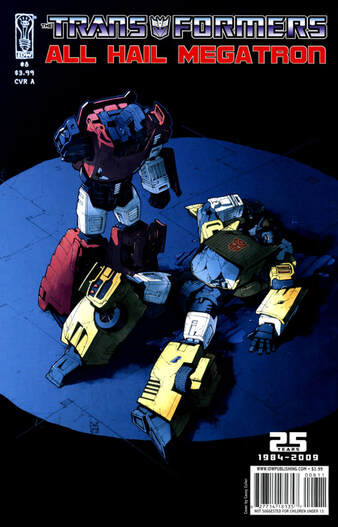 There’s more to this than we know.


After last issue really tied and tangled this story into the Furman stuff, this issue goes one better by giving us an opening flashback that is an immediate follow up to the end of Maximum Dinobots.

Which the astute amongst you will have noted was still two issues away at this point. So not only have  IDW dragged out the end of the previous writer’s work far too long into the new writer’s work, they spoilt the ending of Furman’s stuff just as that end-point is in sight.

So, a year ago, Ratchet bounds into see Sunstreaker aboard an Ark, hugely excited that the operation to separate Sunstreaker and Hunter has been a complete success, Hunter is fine (if never going to ever be fully human again), is a really tough little guy and would Sunstreaker like to go talk to his former head, as Hunter has been asking to see him.

As whilst Sunstreaker gives a full on Kubrick stare, clearly still very traumatised and in a state of denial over what happened to him.

Which, though readers wouldn’t have known it at the time, is very much at odds with the tone of the final scenes of Maximum Dinobots, but more on that in a few weeks. 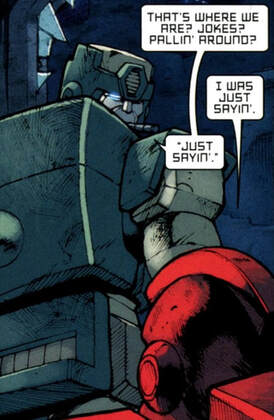 You can sit on Kup's ass.
Back in the present, Ironhide turns out to get off easier for nearly killing someone that Will Smith did for slapping Chris Rock (bit of topical humour there), as rather than being arrested or handcuffed, he has to listen to a talk from Kup. And though Kup starts off tough, refusing to let Ironhide try and do some banter about his (apparently not made for centuries) stogie and pointing out that, at best, Ironhide has cost him a trooper, who definitely was not the traitor.

But then, weirdly (though I suppose he can’t do without an angry punching man), it becomes a softer, gentler approach, about the stresses Ironhide has been under as someone who—unlike Kup—has chosen to stay on the frontline his entire career and his struggling to deal with not having seen this coming.

Which is all stuff Ironhide has already said at great length across the last few issues, so more padding basically.

Still, it is interesting that, when talking about how he knows what it's like to feel alone and trapped, Kup seems to remember the events of his own Spotlight, when Nick Roche will make it rather a key thing that he doesn't later on.

As is their conversation being interrupted by the arrival of the Swarm, meaning another across Cybertron chase (this time, to a secure “Bunker”, so at least the goal is more defined), that you can’t help but feel a better structured story would have combined with last issue’s almost identical chase. So lots more running, shooting, and everyone being oddly Michael Bay excited about running and shooting considering how serious their situation is. Kup especially, is having a great time. 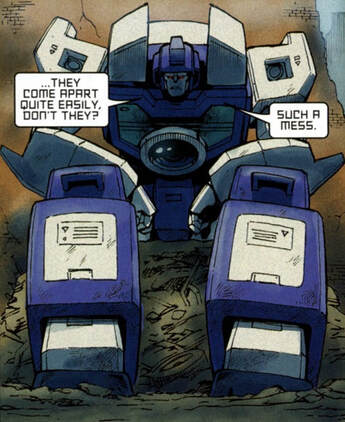 This series in a nutshell.
As are the Reflector trio back in New York, cheerfully finding scavenging humans and pulling them apart. Though the come down is harsh as they wind up very disappointed at how easily fleshlings break. Though, perhaps as a sign of how the series is changing, the actual violence happens entirely between panels with no bodily debris around the melancholy Spectro.

Starscream observes this on his way to have a little chat with the Insecticons, where after some awkwardness over the attack on them in Beijing, he starts buttering them up like Jorts the Cat, saying how they deserve better and how they’ll have a more intellectual future in the Empire, a future he thinks about a lot. So it’s time for a little chat.

The flight from the Swarm takes them over a bridge that has already had explosives planted on it, which sharp-shooter Perceptor takes out as they go past. Which is a scene that solely exists to set up how it was supposed to work at the next bridge, and rather feels like a lack of trust in the reader to work out a very simple concept. Or at the very least, this first, successful go at it could have been done during the chase last issue.

The problem comes with the big bridge though, on that the destruction of will buy them more than enough time to regroup and bed down in the Bunker. But Perceptor gets hit, Springer can’t fly since the crash and no one else is either a long distance shot or a flier. Blurr is prepared to try and outrun the blast though, which actually sounds like a good bet, but it’s at this point Ironhide shows how great he is at security by noticing Sunstreaker is gone. 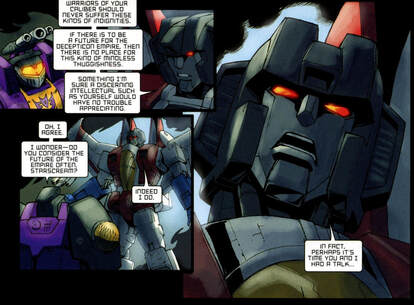 Just two guys being pals.
The next page is just really odd, as, because it features the more Cybertron looking version of New York (in contrast to how the city looked earlier), so it took a moment to realise it’s not a flashback set on that planet. In this purple building, Starscream meets a mystery person he tells that he’s lost his faith in Megatron, and now is the time to act. Which is, again, all stuff we’d worked out earlier, but I honestly can’t remember what the deal with the mystery character is, or where it goes.

We then get the key denouement to the traitor plot that has consumed the Autobots since we switched focus to them. Unfortunately, it comes in an oddly paced moment of Sunstreaker and Ironhide having time to have a good long chat as the Swarm apparently are not in as hot pursuit as they looked a few pages earlier, indeed enough time that someone could have set a fuse and left this conversation for afterwards.

Still, Sunstreaker reveals what the reader worked out last issue, but Ironhide being so blindsided as to be completely surprised is a character moment that actually works. And the visual storytelling from Guido over the next few pages is fantastic, intercutting between this conversation and one between Sunstreaker and Starscream in the past. 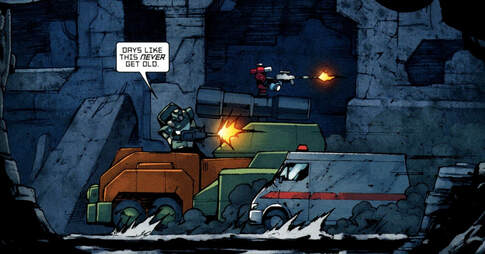 He must have missed last issue.
It was supposed to a trap for Megatron, Starscream wanted the boss gone, and promised to lead him to his death at Autobot hands. All Sunstreaker had to do was help plant the evidence, something he did because he wanted to deliver a vital victory to the Autobots that Prime would never agree to.

But, he has to admit his real reason. The reason the Decepticons worked out. They get Earth after the Autobots pull out once Megatron is no longer a threat, and Sunstreaker specifically requests that Starscream do the one thing he can’t: Kill all the humans in revenge for his Headmasters experience.

Which is solid as motivation, even if I’d say everyone is traumatised enough by four million years of war that they’d all have a good excuse for turning traitor (indeed, McCarthy’s original plan before writing issue 1 was to have Kup do it for being crazy reasons, which was probably a smart change). It also looks like his only contribution to actual treason was somehow making sure Mirage got to overhear the plotting (note how he’s not so desperate as to be the guy who brings in the reconnaissance himself, the trauma is not so overwhelming his thinking he’s not capable of setting up a patsy), which makes you wonder why they went to the effort. 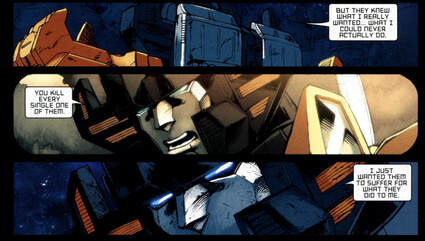 Just because he hasn't had a decent role in a comic in 20 years.
Unfortunately, genocidal hatred of humans doesn’t really fit with what we’re seeing in Maximum Dinobots, and because of what happens next, the consequences of what all this means for Sunstreaker will never really be explored (especially as they’re largely ignored when he gets better from being exploded in a couple of years).

All this talking means the Swarm are now upon them, but luckily, Drift (who looked to have not made it over the first bridge) sweeps in, drags Ironhide off and gives Sunstreaker chance to make amends. Which is the first real moment that feels like Gratuitous Drift, taking away as it does from Sunstreaker’s key moment of redemptive self-sacrifice as he pauses for a sad stare (seriously, Blurr could have walked away from this) and blows up the bridge and himself.

Which leaves Ironhide angry enough to tell Drift to “Get off me” and storm off, leaving Jazz to suggest it’s not a good idea to follow him. 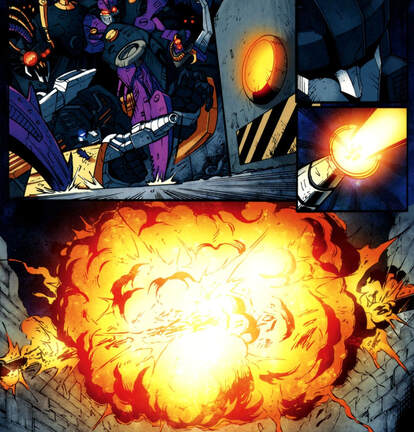 This bridge has a bigger role in the comic than Bridge.
Which is where it’s worth noting that there’s not been any real hint so far, beyond Bumblebee not caring if he’d died in the first bridge bombing, that Drift is a former and infamous Decepticon. So a guy who would generate distrust and have an insight into traitors. So you’ve got to read the character announcement press-release to understand the subtext here.

Said insight means that, when he ignores Jazz and has a bedside chat with Ironhide (because he’s a cool, maverick. I definitely prefer the Roberts/Bayfilm piss-take version of this character), he points out the only thing Sunstreaker did was set up the ambush. The entire taking down of their galactic security systems had to be someone else because, as the famous Transformers slogan puts it, “There’s more to this than we know”.

Which turns out to be that Bombshell has Hunter O’Nion strung up in his cellar, with a interstellar USB cable going straight into the human’s brain.

It’s a scary image once it settles in, but when first confronted by it when turning the page, it’s actually more funny in its unexpected ludicrousness than anything else. And best not to think how Hunter has access to Autobot codes that Sunstreaker doesn’t.

This is another frustrating issue, where the best part is the first Starscream scene because it’s short and has some nice banter between him and Bombshell. 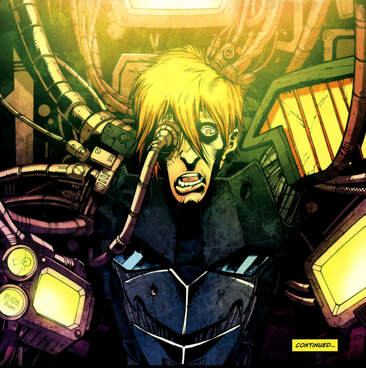 I'll have to keep my *eye* on this development.
The rest though, despite the actual flashbacks being well conveyed by Guido (who is on full art duties again and doing a fine job), completely squanders the key Sunstreaker reveal and death by coming at the end of two issues of running aimlessly about Cybertron from monsters that could have been done in one issue. The padding and repetition has completely killed any momentum for this plot, and that Sunstreaker’s revelation completely pauses what is supposed to be a vital and fast suicide mission doesn’t help.

Which may be why I wound up somewhat nonplussed by the Hunter reveal as well. Potentially great moments, killed by the lack of inertia.

Next week, it’s back to back issues of the same series with Sunstreaker’s fallout in All Hail Megatron 9. 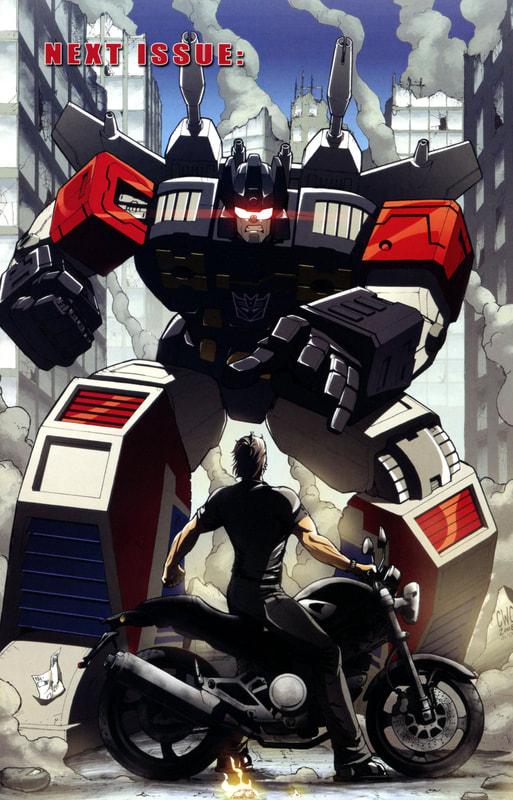