Each Time I Find Myself Flat on My Face, I Pick Myself Up and Get Back in the Race. 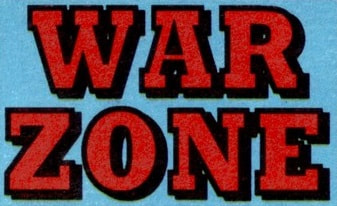 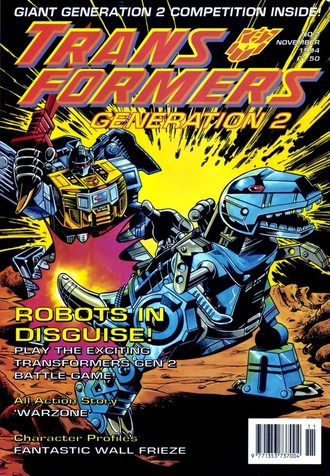 
You gotta understand Megatron, your time has passed! This is a whole new ballgame now.


The comparatively short run of the Generation 2 comic means that, in terms of the context of this website, we reach another important end of an era milestone almost immediately after our last one as we are presented with the last original British Transformers story for nine years. We are about to hit a drought that will last longer than the run of the original comic, and the biggest gap in this project (even if we do have three more weeks of G2 to go).

After rather enjoying the first issue more than I remembered, I went into the second expecting a pretty solid send off to this third (the American comic of course having come out before it, even if I won’t be talking about it till issue 5) attempt to follow on End of the Road! However, the result is, to put it mildly, disappointing. I said last week that if the original plans for the series had changed, they must have been changed pretty quickly to go into the third issue, and this very much reads as something done in a great hurry.

The first worry sign is an entire page of a 12 issue comic (actually one more than the average for Marvel UK) being given over to a splash of a big close up of Megatron’s face. He’s certainly looking happy to be back, but it feels a waste for a story that has to shut down this entire attempt at a British relaunch. 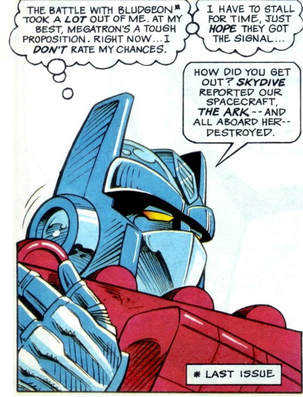 That wacky Skydive.
The thing to note when the page is turned, is that the strip suddenly very much feels as if it is no longer written by Furman. Or at least not the Furman who was in full on G2 grizzly apocalypse mode last issue. Out is talk of countless human death, in is sentences like “First Bludgeon, now Megatron...the most powerful Decepticon of them all! This is not my day!”

All the dialogue is simpler and more in keeping with the tone of the art and presentation of the comic, and more often than not a lot clunkier and awkward as well. There are three options here. First is that Furman is still the writer, but was asked to change his style by the (I believe unknown) editor between issues, possibly because of the changed plans for the series.

Second, last issue was Furman, but for this someone else stepped in, either rewriting his work or entirely their own, for the same reason and that’s why he’s previously been confused on the issue.

Third, neither issue was him, the credit only being down to it adapting his work and the first aped his style better than the second (different writers perhaps?).

Whatever the cause, the promised big fight between Megatron and Optimus is mainly them talking awkwardly at one another. Which lets Optimus makes a surprisingly direct reference to the second issue of the American comic as he claims Skydive told him Megatron had died on the Ark. Which is odd as “I thought you’d died when the Ark was destroyed” would be a nicely vague line that kids could have assumed was a reference to the end of the original comic. Again, it feels as if the wheels are turning behind the scenes to merge this into the American material in a way that wasn’t intended when issue 1 came out. 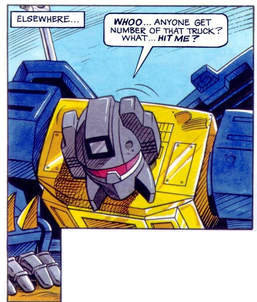 What happened to your face?
Megatron does break up the chat by blowing up he a building, letting Prime think how he is now “More than meets the eye”. Which then leads into the strangest bit of dialogue in the whole issue, as Megatron claims his new body is full of improvements he made himself, before talking as if Prime as asked him a question with a “Human scientists would you believe? They helped me create this form!”, which is just clumsy enough to feel like rewritten at the last second lines. Though why on Earth anyone felt the need to even obliquely reference the crossover this issues are supposed to be negating is a mystery.

We do get a direct lift from the American Prime/Megatron fight as Megatron shows off his glowing fist power, though it’s in a less brutal way than Manny Galan drew it. Though there is the first of a couple of hints of the darkness of the first issue as Megatron is unambiguously going to kill Prime here.

Elsewhere, and in yet another hint of hasty reworking, Grimlock wakes up from having been knocked out by Megatron and has to give a speech to himself about how it wasn’t actually Megatron or Bludgeon he called Prime to Earth about (which I suspect wasn’t the case last issue) but all new Decepticons. 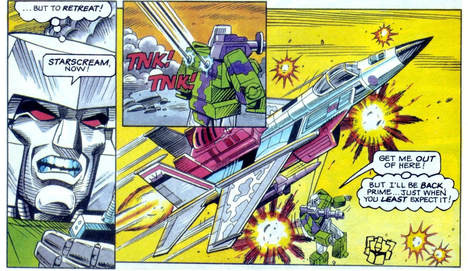 Worth the price of admission. Note also the subtle logo for the competition.
Robin Smith is also using the toy box art for reference on Grimlock (presumably provided over the original character model Prime uses for the colours), which in the change from the original has odd shadows beneath his face, which Smith has interpreted as massive and distracting mandibles.

Oddly the fun stuff comes from the toy promotion, as the Decepticon Stormtroopers ride in and are incredibly dismissive of Megatron, having decided Bludgeon is their best bet and have no time for the old man, cheerfully mocking him, even if they’re forced to call in the guys who are fighting Prime’s troops to help out. There’s even time for a bit of banter between Rage and Aquaspeed, which is nice. When the Dinobots join in, Smith feels more in his element and we get a fun panel of Slag and Firecon Sparkstalker going toe to toe with their flame-breaths.

Which is the point Megatron decides he’s had enough, and calls Starscream in to carry him off. Which again feels like the result of rewrites as Starscream is a major toy the comic hadn’t even hinted at up till now, but is instead randomly introduced in a way that ties into the US comic, and indeed gives us a visual that dared not show us for risk of looking silly as it turns out the transportation the seeker has been providing for Megs really is lugging a giant dayglow tank robot about on ropes under him as he flies about. 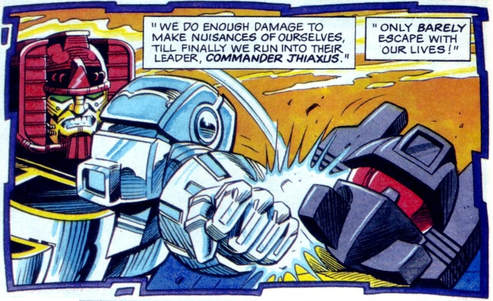 Oh, that's what happened to your face.
There’s then a valiant attempt to explain why none of the other new Decepticons are going to appear again as they’re all taken into custody. Prime, in another glimpse of the otherwise missing darkness, is then prepared to kill Bludgeon... but he’s run off so he can do the whole thing again in two issues time. Which, again, feels like a last second fudge.

The last page is then given over to trying to move things as smoothly as possible into the reprints as, back at Autobase, Grimlock awkwardly recaps the American first issue (which of course, this series could have easily reprinted with only the G.I. Joe featuring ending needing removing/replacing), featuring a flashback cameo from Jhiaxus that is so at odds with the all new toys and nothing but new toys approach of the comic up till now that, yet again, it can’t help but feel like a fudge. Especially as it's within a colourful broken up flashback border that is far more in the style of the American book than the rest of the issue. 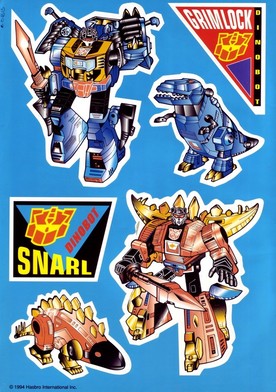 Snarl is frankly terrifying.
Also, Prime telling Girmlock to do nothing about the new Decepticons for no reason other than to lead into the first choice or reprint is very awkward as well, without any of the context the decision in the American series has. And our last original British story for nine years ends with Prime worrying about his visions again. And worry you should Prime.

I’ve no idea why there seems to have been drastic and last minute changes to both the comic and the future of the book between the first two issues (and maybe there wasn’t, and Furman was just having a bad day?), but the result is a disappointment, with both writing and art having a very mediocre day. Cut up American reprints can only be an improvement, though just killing (or arresting if that was too dark) Bludgeon would have been a better bet than just retelling the same story in issue 4.


The comic itself follows the pattern of issue 1 very closely, with the stickers being Dinobot focused this time. Perhaps the biggest surprise though is the editorial not doing a great job of Prime’s plight, talking about him facing Megatron alone...apart from the Autobot army and Dinobots. Which is unfair as, when the issue opens, he is alone! It also remains unclear who the book is aimed at as it talks about how great this is for returning readers but that it is also great for new readers, honest. 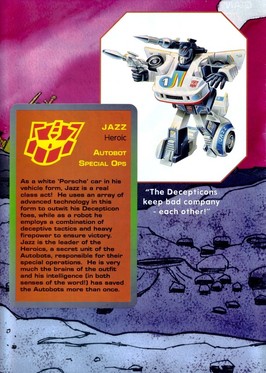 What happened to your mouth?
The fold out cover gives us more profiles, for Piranha, Jazz, Starscream and Blitz. The Jazz is interesting as I hadn’t know that when they reworked his box art for G2, they removed his mouth to match the degradation the toy had undergone since its first release.

The middle fold out isn’t a poster this month, but a “Giant Battle Game”, or basically your normal cut out board game with counters. It’s most interesting for featuring our first art definitely not by Robin Smith, as the Prime and Megatron are very much inspired by the Derek Yaniger style on the American book.

I think the big draw though is the Exclusive Once in a Lifetime Transformers Generation 2 Competition, where you can win all 47 toys released in the UK at this point, by finding the G2 Autobot logos hidden in the comic strip.

The Next Issue page shows that, whatever the intent when issue 1 was put to bed, the decision to go all reprint had been made by this point as the cover to US issue 4 is used with a description of Devices and Desires!, though its possible this was always going to adapt that story even if it had been original content. 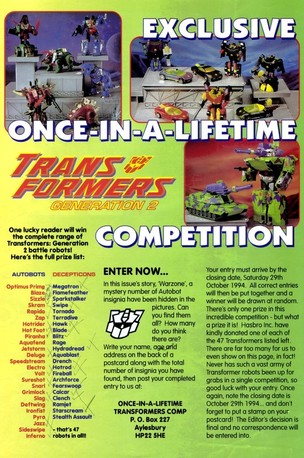 All 47 Transformers!
With all the American issues from the point they’re joining that series being broken into smaller chunks with their own titles, it should have been the easiest job in the world for Fleetway to break it down into shorter issues. But things are about to go very wrong...

Also next week (as the final two issues have the Annual and the American series respectively)...sigh...ReGeneration One. 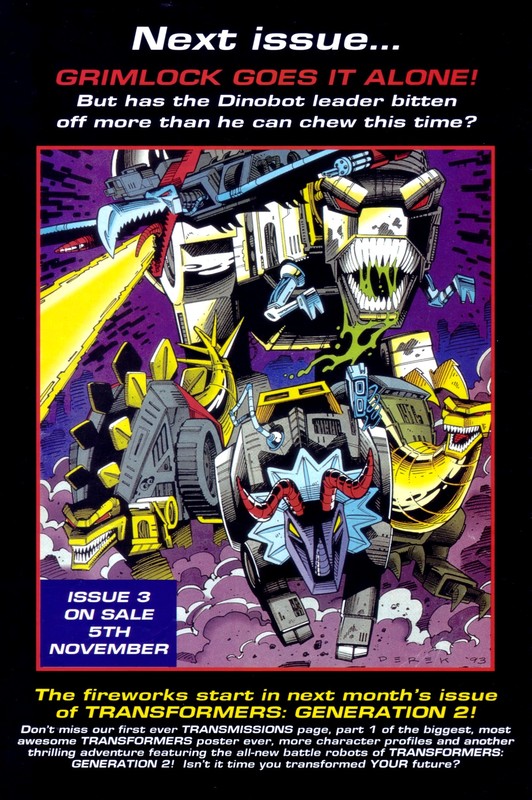