Hello, Did You Miss Me? I Know I'm Hard to Resist. 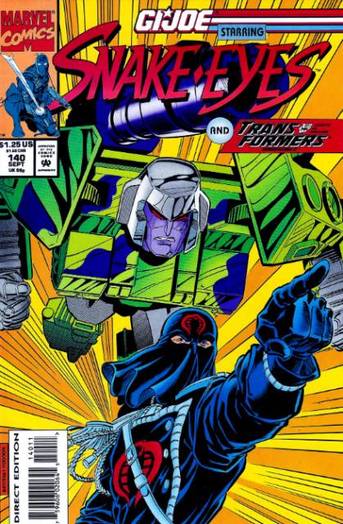 
What? A Democrat in the White House? Cheers got cancelled? What happened to Michael Jackson’s face?


So now we skip back a year, to Marvel US preparing to relaunch Transformers off the back of the new toy-line, with Hasbro being so keen to get this one bit of new promotion for the range (the TV series being re-edited old episodes), they seem to have provided the backing that would allow for at least a 12 issue run no matter what, and allowed the creative team a greater freedom than anyone working on Transformers has previously enjoyed, with only the bare minimum of new toy promotion.

Part of the decision making process was to take advantage of the fact the other Hasbro toy book, G.I. Joe, was still just about stumbling along. Albeit very much in its last days and a similar state to that Transformers was in around Edge of Extinction, but if Budiansky had written another hundred issues after Micromaster wrestling.

The decision to do a four part (the appearance of Megatron and Starscream in issue 138 being a small cameo to set up a cliff-hanger, with a clear sign of how rushed things are being that Starscream doesn’t appear again till Megatron brings him back online in G2 proper) appearance of the new robots in disguise in Joe would therefore fulfil two purposes. Give the new comic some advance promotion and let the returning Furman hit the ground running by taking care of the rebuilding of Megatron into his new body. Meaning these issues would actually do a lot more G2 toy promotion than G2 itself.

What is clear is that Larry Hama did not like the idea. Whilst the Transformers book had briefly acknowledged the previous crossover (though the reference was altered by the UK team), Hama resolutely ignored it. And as soon as the G2 crossover was done, he resolutely ignored that as well, even though the Joes would appear in the main series dealing with a massive Decepticon invasion that ultimate led to the destruction of San Francisco.

A more obvious sign of his disdain comes from the fact we have previously seen that Hama will cheerfully put his ongoing plots on pause for months at a time when the need arises, most obviously with the limp resolution to the situation with Ripcord’s girlfriend. With the Joe roster being so big now, he could have easily done a diversion for a solid two issues of Transformers action involving characters not involved in the Scarlett plot he was pushing, before returning to it. Instead, we get four issues where the his planned story arc and the Cybertronian intrusion awkwardly share space, with both coming off the worse, resulting in something very hard to read in isolation and, based on the letters page, the Joe fans hated. 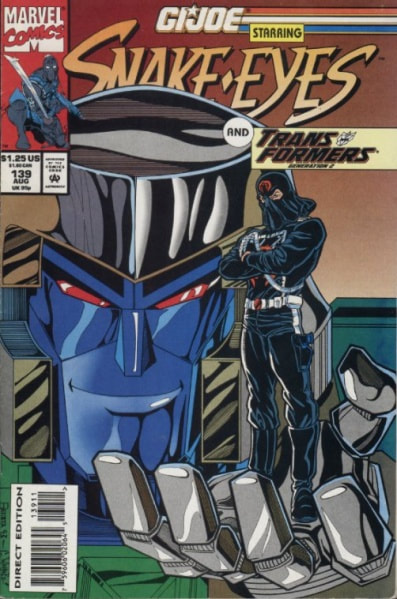 Of course, being Hama, the ongoing plot was all about ninjas. Indeed, his obsession is now at the point where Snake Eyes is in the title of the book, briefly alongside the ridiculous looking Ninja Force, though that park of the moniker would make way for Transformers and not return afterwards.

So it’s all about Scarlett being a traitor and Snake Eyes brooding and ahhhhh but it’s all a trick! We won’t focus too much on this, but instead look at the Transformers side. Though I will say that the best parts of the “A” plot involves the non-ninja characters, most notably the bought back from the dead Dr. Mindbender having a meltdown at the sight of 90’s TV culture.

On the flip-side of that, you have what feels like an endless scene of a so called master ninja getting a complete hard on at the thought of fighting Snake Eyes, before being defeated by the mute one... doing nothing. Or something. It’s all nonsense.

For the Transformers, it’s clear a disinterested Hama was working from a brief, probably provided by Furman. Bring Megatron back, rebuild him, send him on his merry way on the Ark at the end, here’s two Autobots with new toys to feature and leave alive at the end (though Hot Spot’s re-release would wind up not happening), here’s a list of defunct Autobot toys you can feature to kill and show how powerful the new Megatron is.

The quid pro quo seems to be that, without the space for Hama to wrap up his own plot-lines now the crossover has intruded, Furman seems to have been given a list in return to deal with in the second issue of G2 involving the character of Dr. Biggles-Jones. And you can’t completely hate a comic with a character called Dr. Biggles-Jones in it.

Despite all the constraints, the Megatron plot does have plenty of nice moments in it. He’s a very smug snake, cheerfully offering the technology of the Ark for a new body based on advanced technology invented by (DOD undercover agent, though she seems to have made Cobra lots of genuine lethal shit) Dr. Biggles-Jones with lots of sarcasm. His talk is a little more robotic than we’re used to, but it’s still good fun, especially when Megatron is cheerfully trying to extract Dr. Biggles-Jones’ brain for more convenient storage.

The real problem comes from the Autobots that Optimus Prime sends to Earth to deal with the returned menace of Megatron. Even if it mostly had to be characters allowed to die, the selection of Brawn (actually Megatron’s near equal in the cartoon, but a nobody as far as the US comics were concerned), Air Raid, Hot Spot, Steeljaw, Override and Chase (again drawn like Searchlight) is not am impressive sell for the new book, and Megatron barely breaks a sweat whilst killing them.

This is where the art fails. Sadly only issue 138, with the least of the robots, has an experienced Transformers artist as Andrew Wildman finishes his short and personally miserable run on the series, though Baskerville would stay on inks for Chris Batista’s first of two issues. 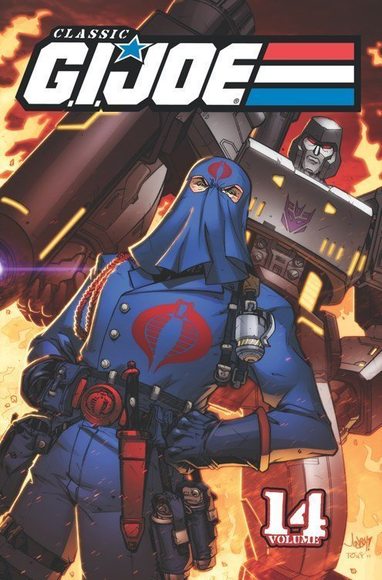 Collected edition cover.
The big fight on the final part is handled by Jesse Orozoco and William Rosado (with two inkers as well, it certainly feels rushed. Steven Leiber was in place of Orozoco on issue 141), and they do a pretty poor job on what should in theory be tense and desperate life and death moment, going for an awkward style that fails to draw humans or robots well. By the time Air Raid is being snuck aboard the Ark (alongside Spike, who has a lot to answer for in every attempt to continue Marvel) I was left wondering more how the hell does Megatron have a clue who Override is more than focusing on the plot.

Of course, a lot of my annoyance here may be down to the fact it is inexplicably currently much easier to get hold of these issues than G2 proper, IDW having put them in two different collections whilst refusing to acknowledge the good stuff. I myself first read most of it in a special collectors card slipcase that included the final three issues (138 may be inessential, but losing 139 made it make even less sense) and the first issue of Generation 2. This boasted of being super rare, but was so ubiquitous as early noughties Memorabilia events you could hardly more for them. Which feels like a more fitting summing up of the crossover.

That said, whilst I’m grateful this will be the last time I have to cover his writing for this project, it was good to see Larry Hama recently come out so firmly against incel ridden hate group Comicsgate when his work was very likely a masturbatory aid for every MAGA hat wearer. I don’t know if that means he’s changed as a person over the years or even those narrow minded fuckwits are too racist for Larry “Buying a car made in a country America was at war with up to forty years ago is EVIL” Hama.

Not to Hama home the point, but that the strange dichotomy at the heart of this author. You hear nothing but good stories about him as a person and how he has helped and supported many people from under-represented groups as they’ve tried to break into comics (and he is himself of Asian heritage, making all the cracks about “Former Axis powers” all the odder), but he’s still the guy who wrote that most Trump of comic moments, “Shooting anyone who disrespects the American flag in the face is A-OK”. Which perhaps makes the last story we are seeing from him being a strange and uneven mish mash all the more appropriate.

Next week, back forward a year and in the UK, it’s a war zone. 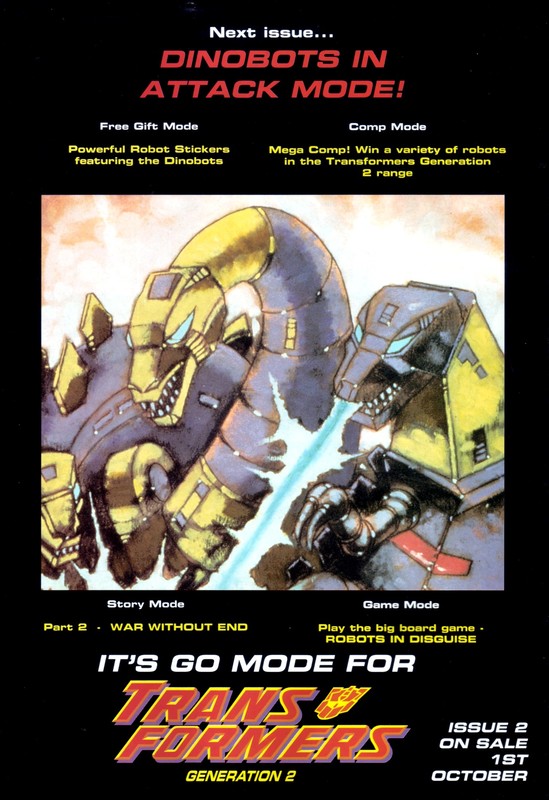