Save Me From the Nothing I've Become. 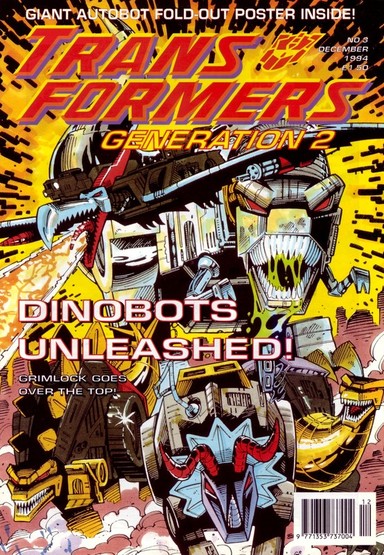 
Me have nasty feeling this going to be far worse than anything Decepticons have in mind!


We’ve discussed the possible reasons and whether it was always intended to be the case, but the most important thing to note about the shift from British to American stories is what a shock it must have been for young readers who hadn’t been expecting it. If Robin Smith’s art in the first two issues had been very much in the British tradition and could have cheerfully been in any comic published in the preceding 30 years, what we get here is the could not look more of the mid-90’s if it tried.

But that’s getting ahead of ourselves. The first thing to note is that, though the US issues were broken up into different stories from the second issue (due to the need to bring in other artists to help Derek Yaniger with his deadline struggles), the selected part of issue 4 was still longer than the page count would allow for. This is rather neatly gotten around by making the gatefold cover part of the comic, adding four pages, though that means the first page showing the full extent of Prime’s nightmare is still cut.

This also, rather cynically means they don’t have to create any content for the gatefold this month, as presumably even slapping the pre-existing profiles onto a background still took a little bit of time and money they’ve now saved.

The second thing to briefly puzzle over is the choice of story. If the opening issues were just about avoiding G.I. Joe, why go straight to U.S. four? Why not create things to, say, lead into a reprint of the Distant Thunder! rehash from the third American issue and maximise how long they could run the book for? That’s not entirely clear, though as all the reprinted material comes from US 4 and 5, it’s not impossible those were the only issues Fleetway had access to. Or it might even be, if this were a desperate late in the day change of plan, there was no thought put into it at all. 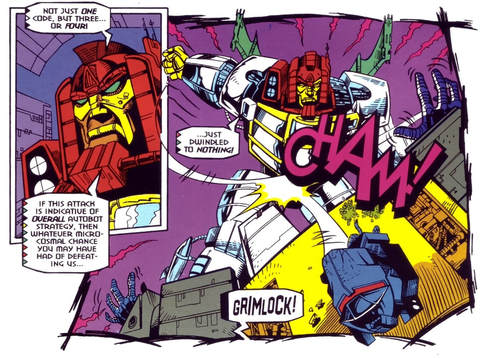 He had it coming. Note how the border around the punch is very like the one featuring Jhiaxus last issue, suggesting Smith used this for reference.
Whatever the cause, and despite the very different visual look, Devices and Desires! actually makes a solid way of seguing from the British to American material, despite the very different visual look.

Which is apparent from the opening of Optimus Prime being eaten from the inside out in his dreams. We’re actually being in a strange position here of seeing Manny Galan’s art before Derek Yaniger’s. The later is very much regarded as the definitive Generation 2 artist, with Manny a pale imitator trying too hard to ape a style they’re not comfortable with. Especially when it comes to the ridiculous brunched up necks. Effectively anyone coming to the title just through the UK series would likely be more sympathetic to the often over criticised second artist.

There’s then a cute gag of Prime turning out to be asleep in his chair and having to be woken up by Kup (who Prime had just seen dead in the cut page from his dream), that’s slightly ruined by the awkward dialogue about how Transformers don’t sleep. The presence of Kup is another sign of the difference between the UK and US approaches, whilst the former was nearly all NEW toys, the title where he’s on a longer leash will see Furman almost entirely only care about the old favourites.

The gist of this scene though is the revelation is that Grimlock has ignored Prime’s orders from the last issue and taken a shuttle to go deal with the new Cybertronains. We get some almost ReGeneration One worthy pretentious dialogue from Prime about his dreams and vast predatory birds, but it’s Kup’s casual thought that he’d have gone with Grimlock if he’d been asked that really makes it.

Grimlock and his crew (Dinobots, the now black Sideswipe and largely a bunch of guys who don’t have new toys and are expendable. Furman may not be promoting the new range much, but when it comes to who can die, some things never change) have successfully grabbed a New Decepticon shuttle and, in best Return of the Jedi fashion, have used it to sneak past the Decepticons defences and onto Jhiaxus’ flagship the Twilight. With Grimlock being very smug about having used the situation to further his own political gain and restore some face having run to Prime for help too quickly. 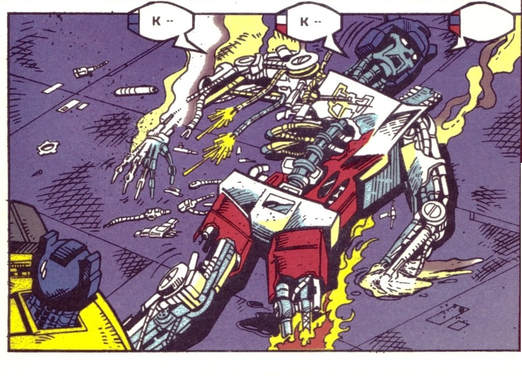 Red alert.
So of course it all goes wrong, as they leave the shuttle all ready to carry out a daring commando raid, and find out that they were expected as Jhiaxus tightened up security after Grimlock’s “Last visit” (which we haven’t seen of course) and multiple codes are needed to approach, not just the one he stole.

This is where not having reprinted issue 1 is a shame, Jhiaxus is a great character and only having his motives and plots reported second hand and hurriedly is not a patch on the calm and ruthless way he set out his store in the American opening. Though he does at least get to give Grimlock a good backhanded slap here.

We’ve had stories of Grimlock breaking the rules, going off on his own and having to learn some humility and acceptance of the responsibilities of command before. Enough for him to be vying with Spike Witwicky (Fleetway have skipped him deciding he is Fortress Maximus for the third time) for character who has the biggest short term memory problem. But here it has some bite as Red Alert, in his first American appearance, refuses the stand down order and gets blasted to bits for his troubles, leaving Grimlock confronted by the results of his failure is a more brutal and direct way than we’ve seen before.

The death of Red Alert and the short sharp “no” from Grimlock sells this so well, you don’t actually need the lengthy thought bubbles as he sits in a shuttle on the way to the Leige Maximo (a throwaway detail that will be of no consequence to the UK series) musing on how he now knows why Prime is always so careful, but it’s still a well done sequence.

We also get a direct contrast as to how Prime does things as this shuttle comes under attack from one with all the right codes, as it turns out Optimus has taken it over and persuaded the Captain to play ball so as to save the men under his command. 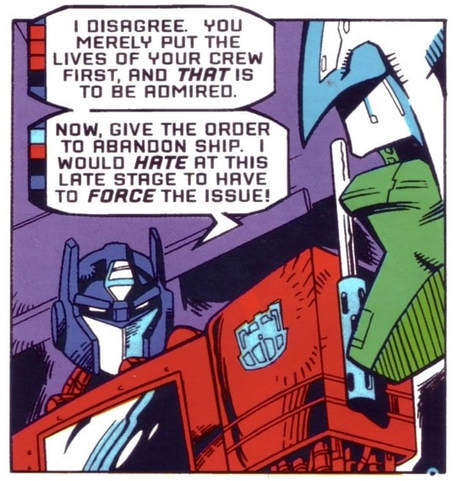 A good leader.
Considering G2 is largely seen as being very dark, this cheerful statement of morality can seem surprising, but back on Grimlock’s shuttle we return to more typically 90’s fare as the prisoners revolt and Mirage become the latest character to brutally killed. Which does psyche up everyone to be more violent in return, but this is perhaps where the art does fail a bit as it looks as if Sideswipe is using him as a human shield and then isn’t especially bothered about it.

The end result winds up being more funny that sad, especially as the last time we saw Mirage it was to show up after a lengthy absence to be killed way back in Dark Star. It being a direct influence on his equally perfunctory IDW death only makes it funnier.

Also morbidly funny is, once everyone has been rescued, Optimus putting Grimlock in charge whilst he goes back to Cybertron to look into his dreams more. Even Grimlock can’t quite believe this after no two failed leaderships and uncountable doomed attempts to do things his own way. One wonders if yet again no one told Prime what happened when he was dead.

Still, this shows why the American G2 comic is so well regarded, even if this is not the most iconic story of the series. There may be some rough edges, especially with the art, but it still feels a fresh take on what gone before and it has aged well into the 90’s tropes it uses.

I should also mention Sarra Mossoff on colours, finally giving us someone other than Nel Yomtov in the role on American stories and showing up the lie that he did as good a job as anyone could under difficult circumstances. The difference in both general accuracy and quality is astounding. There’s only one moment of block colouring—as Grimlock gives his why we’re doing this speech to his crew—and it’s used as the technique should be, to add emotional emphasis to a scene.

"Ignore the last two issues!"
As a final note on the strip, unlike the old days, there’s no localisation of the story. Colour is color and the banner at the end still promises a “Return to Cybertron”, even though that will actually be seen in two months in the UK ordering.

The editorial continues to be strange, opening with “The preliminaries are over, now begins the MAIN EVENT!”. It’s a bold step to start by saying the first two issues were a waste of time, and adds to the feeling of desperation in the switch to reprints.

The big thing this month is the debut of the letters page, Transmissions. And if you want proof of how successful the attempt to aim the first two issues at younger kids has been, only a drawing of Megatron by Zoltan Kis of London and a brief letter from Nathan Wood of York asking why there isn’t a Generation 2 cartoon (watch this space to find out details! Though I don’t think it will ever make it to the UK) are the only ones that feel like they might have come from young kids.

The other art, by J.H. Evans of Anglesey is called The Spirits Haunting the Corridors of Cybertron, and is a mad existential piece inspired by events the comic won’t be reprinting for two issues.

The opening letter from Chris Smith of Kings Langley goes straight in with saying how great it is to have the comic back and how all pre-existing fans send their congratulations. The second from Mark Robinson of Nadderwater is even more overt, specifically asking why the UK stories are similar but different to the American and if he can meet Simon Furman some time. 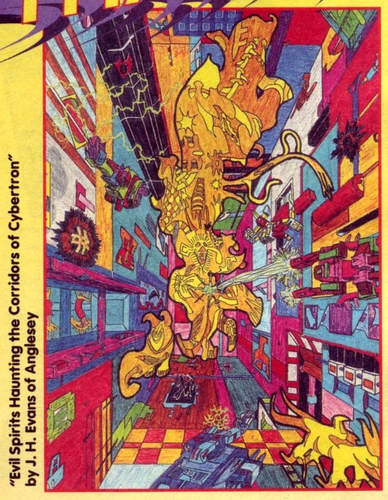 Pity the logo partly covers this glorious insanity.
The answerer (who is also open to suggestions for a Transformer to take over the page) assures us “Our story has been designed by master storyteller Simon Furman to tie-in with the U.S. series. Our plan is to combine new material with the American Transformers: Generation 2 comic to provide the ultimate rendering of the Cybertronians’ adventures”. The use of the present tense suggests the plan was always to do more home-grown stuff, though as the linking of the stories has already been pretty flimsy, it’s hard to put much stock in this.

This month’s poster remains in the Robin Smith style (and may well be him), showing various G2 Autobots charging forwards feels incredibly out of place alongside Galan’s art, emphasising more than anything I could write how the book is pulling itself in two over what sort of comic it is supposed to be.

Another title that leaves you wondering what sort of book it is supposed to be is the other, other continuation of the Marvel series. Which I’m featuring now because it’s a bit too depressing to end my Generation 2 coverage on, so click below for a look at a circuit smashing series.