Now I Know Why They Say You Can't Go Home Again. 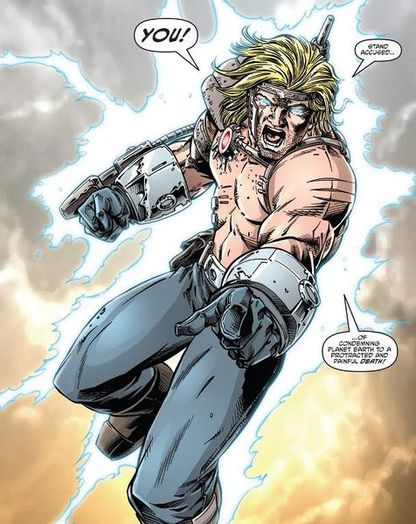 
To be honest, of all the things I’ve written for this project, this was the one I was dreading the most. I knew I couldn’t look at Generation 2 without mentioning its dark counterpart. But equally, the intent of Transformation is to be overall upbeat and positive and at the end of the day the other other continuation of the original Marvel comic is pretty unambiguously awful.

So this isn’t going to be a blow by blow review of the series four arcs. I will say that generally the Scorponok one is the best by just being unashamedly silly (as indeed are any other elements that slightly work, like Megatron being a moustache twirling cad or a cameo by the Cosmic Carnival), but the rest doesn’t work at all as a story on its own merits. Long pretentious nonsense speeches, an almost entirely irrelevant Optimus, rehashes of ideas Furman has either done better elsewhere or have already been rejected by IDW on projects they cared about. It’s certainly hard not to read the Universal entropy and evil Matrix that make up the ending were reworked from what he would have done with the main IDW continuity if he hadn’t been forced to wrap things up suddenly. Though it is an idea he’s been obsessed with and failed to get anyone interested in since the aborted Dreamwave Necroworld comic.

Indeed, to be blunt, if Furman’s worst enemy were to write a cruel and merciless piss take exaggerating all of his worst traits, this is the comic you’d end up with.

Why is the interesting thing though. For some reason IDW and Hasbro were deeply uninterested in doing this comic, even though Larry Hama’s continuation of the Marvel G.I. Joe book was enough of a success to still be running in 2018 and Transformers should have been the next logical step. Incidentally the Joe book also ignores the previous main continuation entirely, and indeed I believe Hasbro formally declared the Devil’s Due stuff to be non-canon, which is a step they haven’t gone as far with as far as Generation 2 is concerned. So just picking up straight from US 80 need not have been an impediment.

From talks Furman and especially Wildman (who clearly didn’t give a fuck about company politics) have given, the two companies they needed to persuade to make this happen were reluctant due to a combination of regarding the current IDW continuity as “Real” G1 (ironically now that is imploding) and not wanting to do anything old fashioned or retro. Which is of course a fool’s errand as everything becomes dated at some point, try reading the very 2005 Infiltration and imagine it being done in the same Ultimates aping way today. 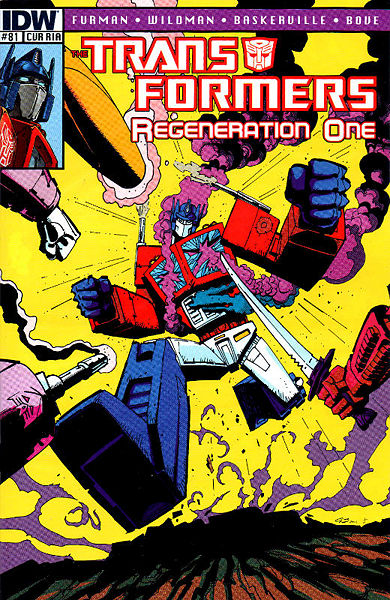 One of the good things about the series: The Senior covers.
Ultimately, even after a very successful fan petition asking for it to happen, lots of rules were put in place. It couldn’t include the Marvel UK stuff (which isn’t an invalid choice, but the final series fumbles the job and has lots of elements that depend on having read Marvel UK—like whole ironic call-backs to the Magnus/Galvatron rivalry—whilst only giving major American characters like Blaster cameos), could only be 20 issues to take the overall total up to 100 (the conceit being the first issue would be numbered 81) and had to end by utterly destroying the entire Marvel continuity as neither Hasbro or IDW ever wanted to see it again.

None of which is really counter to doing a good comic, even if it’s not the choices I would have made. I think the big issue, and Furman and Wildman were as keen on this as anyone, was the desire that it not be a retro comic, but a bang up to date contemporary one. For which of course, by reuniting as many of the people who worked on the original comic as possible (Nel Yomtov was not looked for very hard, officially being retired), was never going to happen. Wildman and Baskerville hadn’t worked regularly in comics for years, and Furman on very little other than Transformers. Nor had guest star Senior. Of the new creators, John Paul Bove on colours (whose bright work never meshes with Wildman’s battered art) and Guido Guidi are very much traditionalist artists. This is not the team you’d put together for a bang up to the minute modern day book.

That is not to say the artistic team fails entirely, Senior, Baskerville and Guidi do walk out of the series with their heads held up, even if the ever excellent Guido is the only one who might use any of his work here on a best of showcase. But They’re not capable of delivering the book it is trying to be.

And the original main artist of Wildman is terrible. You can tell his career is now in the very different discipline of storyboards as his work is sketchy and ill defined (no mouths on background characters if he can avoid it) and very much looks like it’s a quick sketch for animators to use as a basis rather than an actual comic. His attitude was rather contrary on those convention panels as well, on the one hand he would talk at length about his belief in the project and the metaphysical psychobabble importance of Hot Rod (a character who did almost nothing in the US issues this is supposed to be solely a sequel to), on the other he admitted it didn’t pay very well and he’d be off if something that did came along. Which he did when the chance to do storyboards for Doctor Who came along (most notably he’s behind the early Day of the Doctor one with Christopher Eccleston in them).

Which at least allowed Guido to take over as the lead artist after some excellent covers and do Wildman better than Wildman.

A lot of the blame though really has to go on Furman. And if you were to create a poster child for why the series failed, it would be Circuit Smasher. Circuit Breaker of course was owned by Marvel (and whether she ever came out of her coma was one of the few lose ends the series ends), but for some reason the creative team decided she was one of the most important parts of the series and had to be represented in some way (and is directly included as a distant shadow flying to her death in the face of a Decepticon invasion).

So Spike Witwicky, having done his not wanting to be Fortress Maximus thing again and caused Megatron to destroy the Earth because he never properly kept check on the Ark, is injured and Blackrock saves his life by...

Using Circuit Breaker tec to turn him into the lead character of The New Adventures of He-Man as drawn by Rob Liefeld. It looks more horrendously 90’s than anything in Generation 2 and shows a creative team completely out of touch edited by people who don’t care a bit what happens in the comic they didn’t want to do. Compared to how the contemporary More Than Meets the Eye was successfully riding the crest of modern comics and very much feeling as if it belonged on the same shelf as Squirrel Girl and Ms Marvel, it is nothing but tired and creaky. 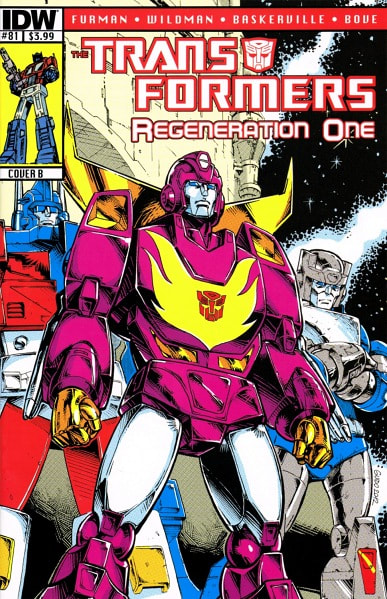 Guido's work, another highlight.
Indeed, Circuit Breaker sums up the series so well, there’s not really anything else to say. Beyond expressing annoyance that the frankly far superior Generation 2 is insulted and ignored by both IDW and Furman at every turn these days in an attempt to try and make Reg seem the one true continuation. Which is something no one else seems to be taking very seriously.

Which is a shame as sales were initially very strong before tailing off drastically to standard IDW levels, there was an audience for some old retro Furman stuff and they did bite, before being put off. And it’s almost certainly done Furman’s overall reputation no good, what’s very clear now is younger fans have very little time for him or his writing (as most recently seen in the reaction to him trying to write female Autobots in the Earth Wars computer game, which shows no progress since Prime’s Rib. Notably despite being the only Transformers comic with humans in it at the time, there’ only one notable speaking female character in Reg). I’ve seen him described as a hack and a terrible writer who was lucky enough to imprint on a generation too young to realise it and who have kept his mediocrity in work long after they should know better.

Now, I obviously don’t agree with that or I wouldn’t be doing all this. And I certainly think he can still do good Transformers work today. Usually on projects where he isn’t trying so hard, like the Dreamwave Armada or Titan film comics. But, as with Steven Moffat’s last few Doctor Who scripts, this is past the point the franchise’s most prolific writer should have moved on.

Really, about the only thing that raises a proper smile from me in this whole series is how the issue Zero that was done in the middle of the run also brings Jeff Anderson and Jose Delbo back, two artists who are usually overlooked by anyone after old retro artists (and presumably their presence is down to Furman), and they get to have a bit of a fun and earn a pay day as well.

Otherwise, this is to be safely ignored.

What can’t be safely ignored is that next week we’re looking at the trickiest issue of the UK Generation 2 comic. And also, it’s the December issue, meaning Christmas and an Annual as well...