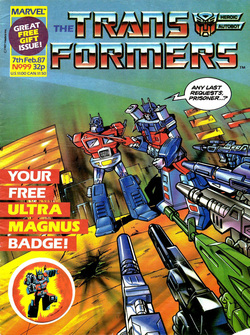 Alriiight! Compared to you I look positively sane!

One of the nice things about having friends who had to good sense to outgrow their childhood interests so they could focus on things like career paths and mortgages is that when they have a clear out of all their old crap they'll often chuck anything they think you'll be interested in your way.

So it was that, before the various trade versions of the Marvel comic, my good friend Michael Reynolds (who years later would be directly responsible for this blog by kindly driving hundreds of miles to deliver the comics I'm using here), threw a little bit of the history of the title from before I was reading it in my direction by giving me his now unwanted copy of this issue.

He also gave me the Gobot Psycho for free, which I was able to sell for a decent amount a couple of years later to the same man I would wind up buying the comics from. It's a small world isn't it?

As such, I'm very fond of this story, reading it at the time felt like a piece of small scale archaeology,  and luckily it's a good one that more than stood up to the scrutiny put upon it under the excitement of being a "New" Transformers adventure.

The issue opens by jumping back slightly in time from last week's cliff-hanger, with Outback approaching the execution squad as his internal monologue plays over the scene. After being presented as a light hearted fanboy in his brief moment in the previous issue (and in most of his dialogue to come), here we get to see beneath the front he puts on publicly and discover a parallel with Optimus' own thoughts last week: A character who has been running from death so long he knows the reaper is going to catch up with him any second.

The idea of a jovial exterior hiding a more troubled soul is one James Roberts would take and run with a quarter of a century later when he made another 1986 mini-bot a lead character in the shape of Swerve. It's obviously an idea that resonates with readers (those of you following the TFA poll results will know the bartender is officially the 30th best Transformer ever), and works just as well here. 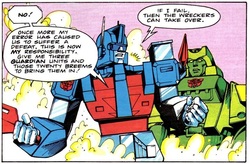 "Also, my letter opener is a bit big".
Outback isn't the only one to be getting some interesting development though. The bulk of this issue is very much about Ultra Magnus dealing with the fallout of his failure to get back from Earth in time for Operation Volcano. Ironically, like we've seen Prime do more than once, he tries to work through these issues with some good old fashioned mindless aggression. Waving a massive sword about and threatening to have Outback shot as well for just suggesting Optimus might be the real deal, he's definitely a powder keg waiting to explode. When Outback helps Optimus escape and Magnus vows to hunt him down with only a couple of Guardian robots rather than all the Wreckers he's clearly chomping at the bit for some vicarious payback on Impactor's behalf.

However, he can't pull off the catharsis through violence like Optimus can, and as a sign of how different they are once alone Magnus realises Outback may have had a point and he could well be overreacting. Optimus may doubt when he's faced with inaction,  but usually once he's committed to a course of action, good or bad (like trying to fake his own death) he embraces it wholeheartedly. Magnus is that little bit more introspective, and that's going to be a good thing for Prime next week.

Before we talk about Optimus, a quick mention of the brief scene at Decepticon headquarters. On the surface it's mainly concerned with a bit of plot business, Megatron ordering that more misinformation about the "Imposter" Prime be put out there to explain why the Decepticons are hunting him as well (for failing in his mission).

However, it also sets up some important details for how the story will go after the slight diversion of the next three weeks. Megatron is clearly mad and out of control, shouting and ranting at everyone in sight. Whilst the Earthbound Decepticons have become numbed to it, those on Cybertron have had enough (and note the set up for Ratbat as leader for even more proof that Furman was well aware of everything up to King of the Hill! whilst writing this), but Straxus only needs him kept around for just a little longer...

But this is much more Prime's story than Megatron's. Things start off a bit shakily as Optimus refuses to run off with Outback, him being worried that he'll now never be able to prove his innocence makes a sort of sense but for the great Autobot tactician to need it pointing out that he wouldn't be able to prove anything by being dead is a bit odd. His loud declaration that fleeing goes against every fibre of his being and he will not rest until his name is cleared feels more like cartoon logic than the more nuanced and practical character Prime is in the rest of this arc. 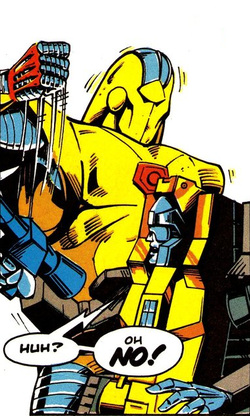 Where's Windcharger when you need him?
However, things improve as the issue ends with an unusually vicious for Anderson (the claws the one Guardian uses to slash Outback are especially nasty) fight between the two rogues and their artificial pursuers. It gets to show the strength and skill of Prime- ripping the head off one is an especially nice piece of practical violence Movie Optimus would be proud of- but it's when Outback falls the full weight of his situation hits him.

Post ReGeneration One the broody monologue sprouting Prime is very hard to take seriously, and certainly you can almost hear the Murray Gold style Loud Music as he delivers his massive speech whilst cradling Outback's body, but at least here it comes after his usual attempt to deal with his issues with action has failed, and his despair at an innocent death happening as a result of his actions is well conveyed. He vows he'll do everything he can to save Outback, but the little Autobot knows he's already dead...

This last panel was actually the source of a pub conversation with the aforementioned Mr. Reynolds this last Christmas as he remembered it really well, though as his mistakenly thought it was Bumblebee being cradled I thought at the time he was thinking of a similar moment with Goldbug in Time Wars. You'll never believe how thrilled he was on Facebook this week when I was able to correct him a mere four months later.

This is a very good issue continuing the run of gold the book is on with this story. We're about the go into a three week side step that won't see most of these threads picked up until after the centenary celebrations are done and dusted, but this leaves them in an excellent place.

Anderson again does some good work on art, his angry sword wielding Magnus is a particular highlight. It's also worth noting that with this storyline the book has really settled into a Simpson/Anderson/Senior rota that will be pretty much permanent until the former departs the book and Dan Reed arrives.

With another free badge (this time of a Senior Magnus) we get another themed Robo-Capers, this time set at the Marvel offices and no doubt again featuring caricatures of people working there at the time. 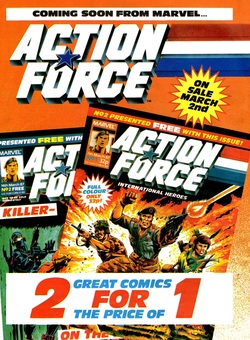 "Please buy our comic... please".
However, the big thing this week, albeit promoted through what feels like gritted teeth, is the launch of three new sister titles to Transformers. Zoids is ditching Spider-Man (who was no doubt holding them back) and going monthly and Thundercats is mildly interesting as it's the first book Furman edited and is thus a training ground for the job he'll be taking in a few weeks. But the big news is the arrival of Action Force, the comic that will effectively become merged with this very book.

The Addendum linked to below will cover the history of Action Force up till this point in the most basic way, but the things we learn from the promotion in this issue in particular is that this Marvel relaunch is being treated as a whole new book with no ties at all to previous versions (it's described as "Introducing" the team as if they're brand new), and issue 2 is the free gift with issue one. Considering the heavy focus on this book out of the three (the other two don't get adverts and I suspect didn't come with such an elaborate loss leader gift), I'd say Hasbro are throwing some serious money at this in order to subsidise the extra focus on what is going to be the only substantial fiction for the new line most kids are going to be able to get their hands on.

The story chosen to act as a lure by being printed as a back up here is Improvisations on a Theme, from the American G.I. Joe issue 44, originally from the tail end of 1985. It's not the greatest issue of the series (this first part has the Joes...err Forcies being attacked by killer plants), but it's still a fast paced romp. It also has the advantage of being standalone- something actually fairly hard to find as Hama worked the book as a big action soap opera- and acts as a good introduction to the series by having a bunch of newly trained Forceites (what is the correct term anyway?) acting as the new audiences identification figures. Of course, by choosing a comic about a year old these new characters also nicely tie in with what's arriving on British shelves as well.

It is however surprising that, having gone to the effort of changing the mention of G.I. Joe to Action Force, it didn't occur to anyone to fix the mistake where Dr. Mindbender (who nicely sets up the strong vein of homoerotic BDSM that runs through the toyline) is called by the- presumably placeholder- name of Dr. Brainwave. A name presumably rejected at the last second because someone thought the character didn’t look enough of a borderline offensive gay stereotype and they needed to work the word “Bender” in there somewhere to make it clear. The Yo Joe Cola gag (such as it is) is basically completely lost in this version as well.

Next week it's the 100 issue spectacular, but before all that, a more detailed (though this is a very broad definition of detailed) look at the road to Action Force.