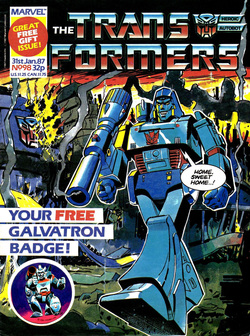 If used without care, that bridge can do untold damage. As I’m sure you know, eh, Straxus?

Well, without wanting to drag out the suspense for those of who have spent the last week restless, tossing and turning screaming out into the night “Did Optimus Prime die???!!!!!!!!!!!!!!”, let me assure you now that our hero and villain are alive and well and back on Cybertron. This is actually a big thing, something that happens surprisingly rarely in the Marvel comics. Uncle Bob will never bring either one of them home, and Furman will only really have Megatron spending a decent amount of time there (Prime will barely get to hang out on the planet for five seconds before exploding).

So the bulk of ...The Harder They Die! (in order to not be off-putting to casual buyers this storyline is going to use a variety of different titles and even break up the flow of the narrative so as not to seem an impenetrably long epic) is given over not so much to plot advancement but simply to revelling in the return of the two leaders to their home and the very different reaction each one has to the plight. It’s the sort of thing that only a weekly comic could take the time to do, the need to do one compact story in 22 pages every month would make this sort of character study almost impossible for the American book to pull off.

We first deal with Optimus Prime, and his reaction is understandably not all happiness and light. Cybertron is a clapped out ruin ruled by the Decepticon’s iron fist, if he thought he had reasons to be depressed and full of angst just because Jetfire was a useless fill-in commander, it’s hardly surprising the sight of a smouldering Iacon brings him to his knees.

"Have you seen Dragon?"
It’s worth remembering that, even though we’ve known the current state of play on Cybertron for the best part of a year (and Megatron presumably has been kept constantly up to date since the initial contact with Straxus), Optimus has never even had the slightest hint of what life is currently like on the planet up till now and the shock and dismay is palpable, with him left wondering how long he can avoid the death that seems to be constantly stalking him when even his world has succumbed to it.

It’s not all introspection though, as the issue opens with him coming across a Decepticon lording it up over one of the few 1986 mini-bots to actually get something to do pre-James Roberts, Outback. Years later this scene will have an ironic echo (probably unintentionally, but it still works) when Megatron returns to an Autobot controlled area of Cybertron in Fall and Rise of the Decepticon Empire.

The generic Decepticon does show up Geoff Senior’s one weakness as a Transformers artist- his newly created characters look like humans in hats and armour, often being able to double for Dragon’s Claws characters. But that doesn’t take away from an exhilarating scene as the now mad as hell Optimus tries to take the Decepticon on, only to find him nastier than he seems resulting in Prime having his optics briefly shorted out. It’s not the triumphant ass whupping that normally brings him out of his misery, and he only wins by accidentally flinging the ‘con onto some big brutal looking spikes. The subtext being clear, the situation on Cybertron has degenerated to the point even the greatest Autobot of them all can’t handle it anymore.

We then get a brief scene of Outback quickly establishing himself as a proto-Ironfist as he gushes all over Optimus Prime like a fan would over Peter Cullen (there’s also a likely intentional Escape From New York nod with the “I thought you were long dead!”) that’s important for establishing his character over the rest of this arc, but otherwise the main meat of this issue is back at Decepticon headquarters.

Yes, as you’d expect, Megatron is having a gay old time of it, being a bit too excited at the state of Decepticon ruled Cybertron and virtually doing a little jolly jig over it. He no longer even cares about why the Predacons trying to kill him, nor why Optimus was carrying an exact replica of himself about. He’s just really glad he decided to escape from his troubles via the Space Bridge (which is firmly established as still being very dangerous to use, so at least we’re getting set up for the Budiansky stories) so as to have gotten the chance to see all this. This is, by a considerable margin, the happiest Megatron will ever be. 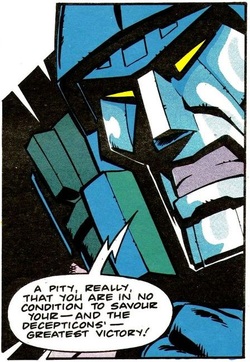 "You'll never get ahead in this game!"
This cannot be said for his new host, but then it’d be hard to tell if he was really happy under any circumstances. In the very first example of what will become a trend of characters killed off by the American series being quickly resurrected by the British, Straxus turns out to have actually survived blowing up in interdimensional space.

However, he’s now the least fortunate fictional character this side of Christopher Pike, being nothing more than a floating head in a jar. The best remembered take on the character (and the inspiration for Andrew Turnbull’s delightfully demented Daily Straxus comic), this literal head of state is going to be playing mind games with Megatron almost to the very end of the British stories, and makes for a fantastically memorable visual.

He obviously isn’t all that keen on having Megatron back- and who can blame him as bucket head can’t go thirty seconds without making some sort of barbed reference to Straxus’ condition like he’s Will Smith in Wild, Wild West- and is even less keen on having Optimus around to rejuvenate the Autobot resistance effort. But Megatron has a cunning plan, he’s leaked information that the Decepticons have made a perfect Optimus duplicate, soon the Autobots will do their work for them...

This leads us to the big cliff-hanger of the issue as, after the aforementioned Iacon moment, Optimus meets Rack’N’Ruin, and is understandably a bit baffled. He’s even more so as he gets attacked for his troubles, and comes extremely close to going “Don’t you know who I am?” like a third rate celebrity trying to jump the queue at a nightclub.

After being knocked out by a newly designed Guardian robot (set up for the next few issues), Prime comes too just in time to die, as the Wreckers have found him guilty of being a fake, and the sentence is death!

This is a very good focus on the two main characters of the book, full of pathos on Prime’s part and dark humour on Megatron’s. It’s very talky, but exactly the right sort of talky and the brief action scenes are well handled. Dodgy generic design aside, Senior is on fine form as well making for a stunning issue that sets up the Cybertron based section of the story in extreme style. 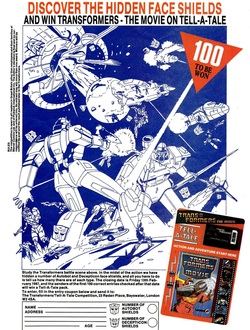 Gotta catch them all.
We get a rather funky free gift this week, a badge of Geoff Senior Galvatron art. Robo-Capers comes up with a list of various places you shouldn’t stick it that, due to being in rhyme, feels almost proto-Purple Ronny-ish in its style.

There’s also a competition for the Tell-A—Tale version of the Ladybird Movie adaptation, where you have to find various hidden Autobot and Decepticon symbols hidden in a black and white version of the poster art.

Meanwhile Grimlock (who now knows about the toys that come with Metroplex, but won’t count them, the grump) has a new list of every Transformer ever from Simon Turpin of Leeds that, after some haggling, works out as a new record of 164. Blimey.

The big news however is the end of Spitfire and the Troubleshooters. After only three issues have been reprinted and with lots of loose ends over who is really behind Krotze, it’s quietly moved aside. As we’ll discuss in a second this might not be entirely down to the perceived quality of the work, but it won’t really be missed, even if there is some irony that right at the very end the Troubleshooters finally do something useful by saving Jenny. Tellingly the very final speech bubble in blanked out in the most inept way, not removed, not replaced with new text, just black squiggles placed over whatever was there before. Clearly this was set up for whatever happened in issue 4, with the decision to drop the series coming so suddenly the UK team clearly didn’t have chance to make the edit smoother.

But what is Jenny making way for? The UK (or rather the Marvel UK... the history of this franchise is more than a bit confused, as is its future) launch of Action Force! They’ll be more, lots more, on the attempts to get British children to give a toss about G.I. Joe over the coming weeks and years, but suffice to say the success of Transformers is seeing a sister Hasbro title launched, and for the next four weeks the backup strip will be acting as advance promotion. I suspect the fact the “Next Week” box (using what looks to be the cover of the original American issue) is all about Action Force would be one of those things the editorial team had forced on them by Hasbro at gunpoint.

Mind, even if that is the reason for the dropping of Spitfire; it’s telling the series isn’t simply picked up on again after the Action Force cross-promotion.

Next week (back on Friday), what can sell a new action adventure comic better than reprinting the first appearance of the world’s most homoerotic scientist?

Oh, and some Transformers stuff as well. 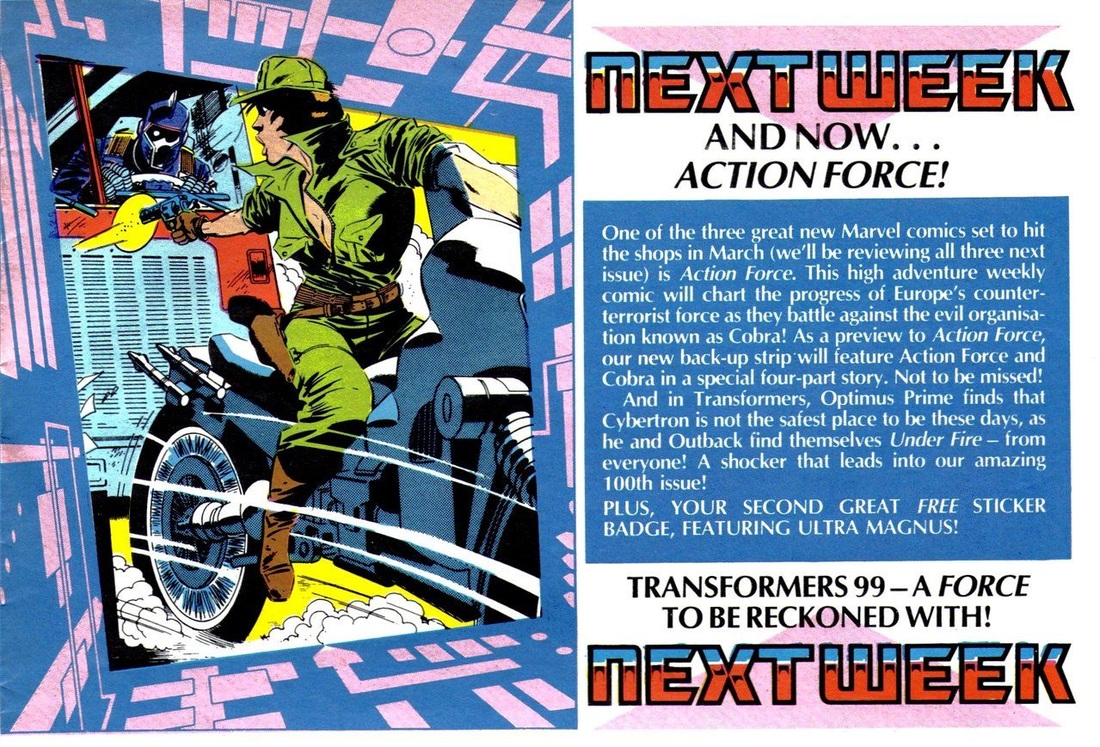 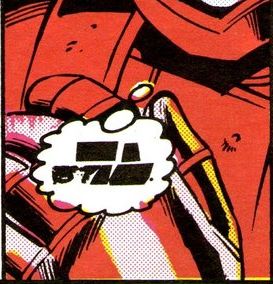 Your guess is as good as mine...