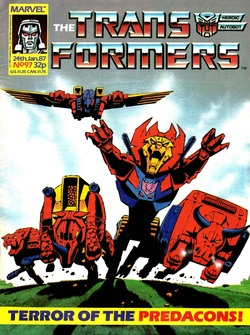 I just hope he makes it look convincing!

One of the nice things about last week's issue dealing with all of the set up for this story arc is that the second instalment can jump straight into a full blown all out action romp of the sort that's been sorely lacking from the American stories of the last few months, indeed since the Galvatron/Magnus epic back in issue 86. I’m not necessarily a fan of action for its own sake, but that's been enough of a drought for it to make a very welcome change of pace.

As we learnt back in Crisis of Command, when Marvel Prime is feeling the pressure of leadership, getting down and dirty with his fists shakes him out of it, and this is no exception. Being hunted by the Predacons brings his mind into focus, and after the more indecisive Prime of last week here we see him at his firm no nonsense best.

It turns out that after being cornered at the end of Part 1, Megatron decided to prolong Prime's torment by letting him run. Normally I'd point out what a terrible cliché of stupid villainy this is, but Megatron at least has the excuse of being madder than King George IV (and I'm talking the Blackadder the Third version), so it actually makes sense he'd give the capable and resourceful Prime this needless chance.

The various skirmishes between Prime and the Predacons that follow are generally well handled; it isn’t the obvious thing of the new toys automatically being better, but equally doesn't make them seem useless in not being able to take out this one target. Both sides are simply very good and almost evenly balanced.

Trailerless Prime!
The edge does go to the Predacons however as they have Predaking in reserve, but Optimus has an idea back at his trailer... No, not his battle station (which goes oddly unmentioned as an option considering the story makes mention of the mental link between Prime and trailer), but the mysterious something Wheeljack placed in there last week.

He doesn't have time to whip it out though as Megatron blasts the trailer, but rather nicely the story doesn't try to pretend that when Razorclaw seems to jumps at Prime he's going to do anything other than land on Megatron, the preceding dialogue making it clear this is where they're going to make their move against him. The something in the trailer having a very familiar pair of blue legs means the reader is actually well ahead of how this week's cliffhanger is going to resolve itself, the mystery and drama instead coming from not knowing exactly what happens between Razorclaw jumping and the Autobots arriving, where did everybody go? 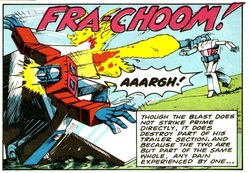 That trailer is actually kind of a liability really isn't it?
That's a harder thing to pull off than the usual Perils of Pauline stuff; the issue could just as easily been written with none of the set up stuff shown so as to make the seeming death of Prime even more impactful before flashbacks do the "What reeeeeeally happened" thing filling in those blanks next week.

Or maybe that's giving Furman too much credit as the end of the issue is a bit odd, Wheeljack (who does have a lovely little moment back at the Ark where he's being very casual and relaxed about when he bothers to set Prime's plan in motion), brings the Autobots to the woods fully expecting to find a dead Optimus Prime, only to react with complete and genuine surprise when he does so. He even has a "Shocked expression" flash of light drawn round his head so as to draw especial emphasis to it. Maybe he's just playing his part to the hilt, but it's behaviour that's only going to seem stranger as the story goes on (if it's the smashed trailer bits that convince him this is real it's still odd he never mentions the original plan to anyone else, nor tests the "Body" to make sure it's not the duplicate).

Overall though, this is a fantastic fast paced action issue full of tension and nice little character moments. It stands up especially well compared to the flabby and tired feeling final issue of ReGeneration One published this week. Which, with its tendency to have major characters die quoting Transformers: The Movie feels more like it was written by Brad Mick than the same Furman who knocked out this little mini-masterpiece.

Jeff Anderson does a credible job on art, but is hampered by it never quite living up to that Senior cover, nor indeed the flashbacks to this fight Senior will also draw next week. But it's hugely unfair to berate everyone who isn't Senior for not being Senior and Anderson still does some nice solid work here.

The price of the comic goes up two whole pence to 32p this week, and Transformation is mainly concerned with damage limitation so as to assure kids the book is still worth buying despite this potential pocket money busting raise. It's rather sweet, and is the first time the book makes a fuss of being the UK's number one action comic, so presumably we are now into the period where it had started to outsell 2000AD. The next year will see the two in a constant battle for top spot, and this really marks the golden period of the comic's popularity.

Grimlock gets a nice thoughtful letter from Steve Tanner of Llantwit Major suggesting Target: 2006 should be the first Marvel UK graphic novel (very prescient considering it will be the first Transformers UK story collected in book form, albeit not by Marvel), and asking why Galvatron doesn't remember the events of that story through Megatron's eyes. Unfortunately the answer Furman gives Grimlock (still not the same person at this point) feels a bit pulled out of his arse. Based on how the story ended, if Galvatron had gone back to an alternate time line right from the off he'd have just returned to 2006 as soon as he realised things were happening he didn't remember.

Robo-Capers is a follow up piece to the "Rejected Transformers" one, and appeals to my simple love of toilet humour with one that turns into... Well a toilet.

Spitfire and the Troubleshooters sees Jenny actually kill (well, that's the way she reacts, it actually looks more like a shoulder wound) someone by accident. This is good because what this series really needed was more angst laid upon the lead.

Next week (on a Thursday as I'm on holiday) is Prime dead? 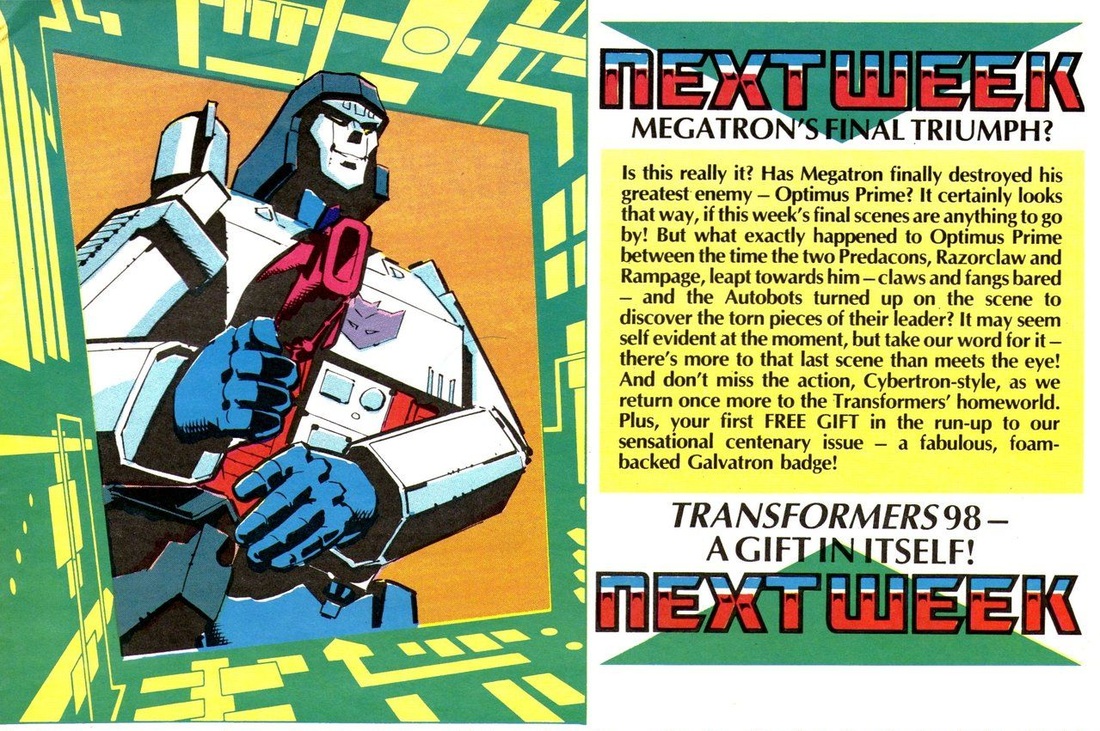