I'm on the Hunt I'm After You. 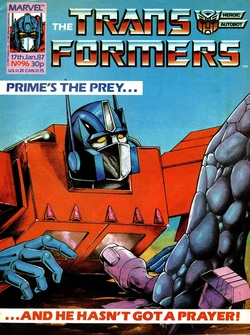 Oh, and Wheeljack, save the long faces until I'm actually dead!

After a sedate few months of American reprints of variable quality and Christmas, it's time to kick things into high gear again with the start of the next BIG epic (though so as not to be off putting too casual readers it'll be presented as a series of two parters), a storyline that will see Optimus and Megatron return to Cybertron, Galvatron return to the 1980's, the Wreckers return and Ratbat. You don't need any qualifier as to why the presence of Ratbat is epic of course, his name is enough.

It's also the most overt example in the entire Marvel run of Furman doing the writing equivalent of cock blocking Bob Budiansky.

As we've seen from comments on the letters page over the last few months, it's been fairly obvious that at this point at time Furman had a decent foreknowledge of what was coming up in the American stories with regards to the deaths of Optimus and Megatron and had already began to think through his Divebomb/Swoop story we'll be seeing later in the year.

Now, it's not spoiling too much to reveal that the way Uncle Bob removes the two leaders are not his best regarded stories (though ironically this story will borrow most heavily from what is generally seen as the best issue of that arc), so the intent here seems to have been to give Prime and Megs a better final romp that shamelessly steals the bits of Uncle Bob's story that Furman liked and presenting it beforehand so that readers unfamiliar with the flow of inspiration would think it was Bob who was rehashing ideas from a story only a few months old.

This isn't the first time something like this has happened of course, Furman pre-empted the famous "Are all dead!" cover at the end of his second story, nor will it be the last, but it is by far and away the most extensive. This will create all sorts of problems when we get to the reprints of Bob's work, and even allowing for the fact that those stories aren't very good it does seem somewhat mean spirited.

That might seem harsh, but if Furman wanted to give the two leaders a better grand finale he didn’t have to include Predacons and Space Bridges (the interview in the Classics UK book containing this story makes it clear that this wasn’t Hasbro UK mandated like Second Generation was), it might have been annoying if he’d really wanted to do something with the Decepticon hunters but it would still have been good form. It also shows that editor Ian Rimmer was probably starting to take his foot off the pedal as his departure from the book approaches, it’s unlikely if he was still going to be around to have to oversee trying to make the Budiansky stories fit in with this that he would even have signed off on it. 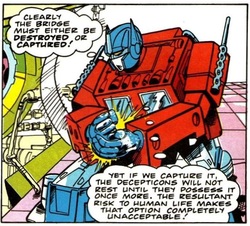 "And Jetfire never gets to run anything ever again"
But of course, the vast majority of readers at the time would have had no idea of this (though ironically a change in the distribution of the comic we'll be talking about later means it is now potentially reaching more readers familiar with the U.S. series), so how does our first run through the "Shockwave uses the Predacons against Megatron in a massive trick" plot stand up on its own merits?

Fittingly for a story that's building up to a major milestone, things start with some retrospection as Optimus sits in the Ark watching video recaps of previous stories (confirming the Autobots did know all about Runabout and Runamuck, they just didn't care, though the black and white era will cast a new light on that), introducing us, surprisingly late in the day, to Furman's final fully fledged take on the Autobot leader.

Prime has had moments of introspection and doubt before (the non-Furman written Crisis of Command being the biggest example), but this is where Furman really goes to town with the idea of Optimus as a brooding and unsure hero. In later years this will be well and truly mined out, but here it's a fresh interesting idea and he actually has good reason to be insecure.

Optimus, much like myself, is deeply concerned that the Autobots made so many poor choices during Target: 2006 and realises he has become too indispensable to his troop, how can he fight as hard as he need to in order to protect the humans if he daren't risk the chance of being killed as the Autobots will fall apart without him?

It's a fantastic scene that really adds some depth to Prime, and what the solution might be that he comes up with to test the ability of the others to cope with his death is genuinely intriguing.

The rest of the issue is, unsurprisingly for something that has to set up three months of story, is more about moving the pieces to get all the characters into the right place at the right time for events to unfold.

On the Autobot side of things, this involves Prime plotting with Wheeljack to build Something, and then insisting on going out on a patrol by himself despite the protestations of his troops with that Something in his trailer. Because we already know things won't be going according to plan there's both an added tension and a certain black humour to him so cheerfully going off to what he thinks is going to be a faked certain doom but which will instead turn out to be his actual almost certain doom. 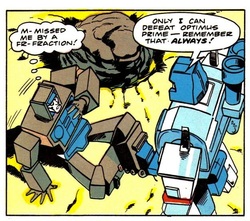 "But my toy is only six months old!"
Over in the Decepticon camp, we get some hugely entertaining scenes of Megatron continuing to be snooker loopy as he shouts and rants at Motormaster before coming this close to smashing his skull in with a boulder. It's so bad by this point Soundwave has decided to throw his lot in with Shockwave, placing the idea that it'd be a really great idea to call in the Predacons from Cybertron and use them to soften up Prime before Megatron himself delivers the final blow.

Megatron thinks this is a great idea (the magic ferret who lives in his fusion cannon probably told him so), completely unaware that Shockwave is listening in, leading to a great panel of ol'one eye having a good gloat about the genius of his plan.

The Predacons themselves are going to be the only combiner from this period of the comic to get any real consistent love as a group after their introduction, and you can see the extent to which Furman likes these brightly coloured hunters much more than the Special Teams as the first thing he has them do is heap more humiliation on Motormaster. The poor bastard, being a newish toy is no protection when no one likes you.

The Autobot and Decepticon sides of the plot then converge as Prime is attacked by the Predacons before he has chance to put his own plot into place, and the issue ends with Megatron looming over him and gloating about this being the final end...

This is a very coincidence driven issue, even by the standards of action comics, as the whole plot would never have gotten anywhere if Optimus hadn't picked that day to go out alone, but originality niggles aside this is still an excellent start with lots of nice scenes despite the heavy set up. The understated parallel between Prime and Megs- the former so indispensable to his army his presence is actually hurting them whilst the later has become a complete liability to his, resulting in both needing to "go away" is nicely done as well.

On art, Will Simpson does some of his best work, managing to convey the angst of Prime and the madness of Megatron perfectly. After formally débuting in The Gift this is the first time we can compare the new colouring method on the work of an artist from the hand coloured era, and though I'm sure the artists themselves preferred the added vibrancy of the old technique as far as this man who basically knows nothing about these things can see it pretty much works fine (and much better than the proto-attempt back in Robot Buster). The only real let down being an increase in Yomtov style block colouring. 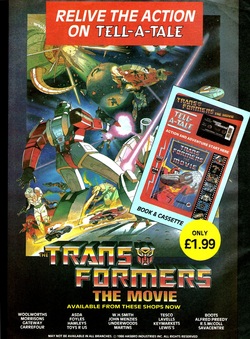 The tape of the book of the film.
Though it started last issue (though I failed to spot it) this being the beginning of a new story they wouldn't have seen before means Transformation makes a fuss out of the comic now formally being on sale in America, with a cover price of $1.25. It'll never be very well distributed in the States- with close to half the issues being reprints what'd be the point?- but it does show how Marvel UK were starting to think in terms of marketing their stuff back in the parent company's motherland. It's lucky the U.S. release will be so small scale really as of course those are the fans who would find this all very familiar.

Grimlock meanwhile helps readers Piers Barden from Norwich and John Dorney-the same who writes and acts in so many Doctor Who audios for Big Finish? - from Arkesden work out exactly when Target: 2006 happens during the Winter Special (page 32, interestingly no one asks where it happens during the film itself), and perhaps strangely promotes the third season of the cartoon as the place to find out what happens after the movie. Ironically after finally promoting the cartoon in a positive way the third season will never make it to terrestrial TV in the UK. He does at least hint we might be seeing Galvatron again a lot sooner...

Over in Spitfire and the Troubleshooters the Troubleshooters try desperately to convince us they're not a waste of space by building more useless gadgets to help them run faster and look at computers better. It's not convincing and the highlight is the increasingly sweaty Krotze frying someone who attempts to blackmail him over the death of Jenny's father with a giant laser. It's a surprisingly tense sequence for this series and the further hints about the people Krotze is really working for are almost interesting.

The main thing to mention about Robo-Capers this week is it features an Australian soldier who wears an army hat with corks on strings round the rim. Which is awesome.

Also, the results of the 30 Greatest Transformers of All Time poll have started to go up over at TFArchive with little write ups by myself and a bunch of people nearly as good as me, and the rest will be revealed over the next few weeks. Will your favourite be placed? Start to find out HERE. 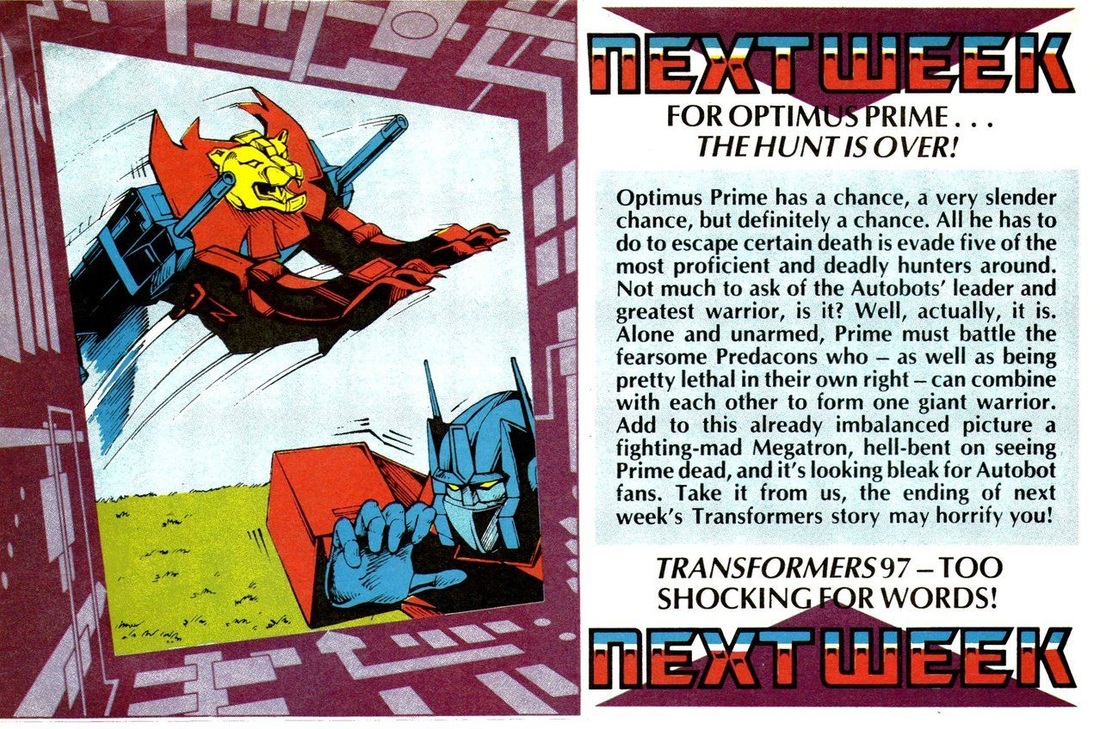