...All Smacked up on Scooby Snacks. 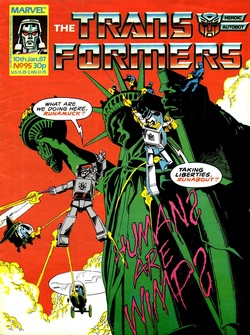 I can only hope my penmanship is adequate--after all, we just learnt to write in English!

I mentioned last week that this was the final appearance of Donny, but it's fair to say that Budiansky is using this issue to wrap up more than just the adventures of the former Robot-Master, just about every dangling and ignored thread from 1986 is wrapped up here before his next story launches the American book in what can charitably be called a whole new direction.

What is only clear with the foreknowledge that she won't be seen again for ages (and will only feature in one more story by her creator), is that this also applies to Circuit Breaker. Apart from one character reset line at the end, which has the feeling of something added at the last second just in case, this would actually work perfectly well as a final story for Josie.

As part of what feels like an attempt to wrap up her storyline, she suddenly benefits from her first character development since her original accident. This starts in that city most famous for being immortalised in the theme tune to The Fresh Prince of Bel Air, Philadelphia.

When a RAAT attack on the Battle Chargers puts graffiti mad Noah in danger because Circuit Breaker doesn't give a toss about anything but revenge on the robots, it acts as a wakeup call for her as to how extreme she's become. Which nicely, and of course completely coincidentally, calls back to her similarly fraught attempt to save a small boy back in the first British Christmas story. 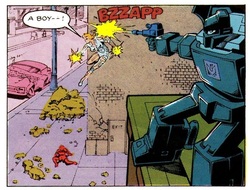 No fooling her.
There is a slight flaw in that RAAT, and subsequently Barnett, act is if it was entirely right to attack the middle of a highly populated city to fight a menace that hasn't actually threatened human life yet, it’s just they should have withdrawn as soon as it was clear people were in danger. Considering that would be a given under the circumstances I'd say common sense should have seen it not happen in the first place. RAAT also look really stupid in their Manta Force style cheap nasty vehicles.

Still, with some broken ribs and suspension from RAAT to show for her troubles,  this epiphany over having gone too far actually leaves Josie receptive to Donny's idea she ask the Autobots for help. And when it turns out they can't be fixed in time to stop the Battle Chargers reaching New York, she follows through on his suggestion to...

Well, OK, it's completely stupid (if nothing else, doing this really shouldn't have been easier than just putting the Autobot's faces back on), but it strangely fits the tone of the rest of the stuff with Runabout and Runamuck. Yes, somehow, she’s managed to turn a bunch of random Autobot parts that don't really look as if they come from any of the captured Autobots into a giant mech suit for herself. That somehow the Autobots can still exert some influence over. And that can detach its arms and fly them about.

Compared to that the torch of the Statue of Liberty being a detachable bit of kit almost makes sense. 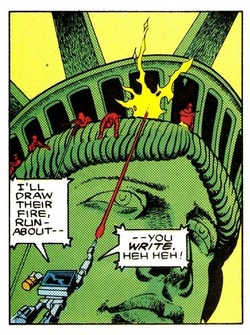 He totally killed a human!
Still, the real point of the scene is that by first trusting the Autobots and then being shown their compassion as they have the suit protect her even after all she's done she finally gets it through her head that there really are good and bad robots, and about time too.

This would have been a great place to exit her character, if not for the end of the issue revealing she had to agree to free the Autobots to get their help (which, as with the Blackrock "Be an awful shame if the Decepticons smashed up your plant" fuel deal doesn't actually seem very Autobot does it?), and as such sees her and Donny sacked by Barnett. Resulting in an idiotic character development reversing speech that basically boils down to "Those robots got me my P45! That's the worst thing they've ever done to me and WILL NEVER BE FORGIVEN!"

So close to being done well it hurts, but it still would have been better to leave her here. For those of you that don't know what sort of wacky hijinks she'll be involved in during her final Budiansky story in a couple of years, I won't ruin it. Though if you've seen Hoist Goes Hollywood, you'll have the gist of it.

As the above implies, there's not as much Battle Charger fun this week, but what we do get is gold and the payoff to the gag about what their "sophisticated" graffiti really says is hilarious. Shame the cover ruins it, stubbies are wimps indeed.

The final payoff of the issue is Donny's story, after being sacked by RAAT he goes back to his run down tenement (I guess Bob is saying Marvel pay shit?) and is all ready to spend his Skids betraying Judas money on a penthouse before he sees an news story on the Lady Liberty restoration fund and decides to donate the entire check to it. Awwwww.

It's actually a decent send-off for him, but I'm more than glad we'll never see him again. Hmm, I wonder what Optimus Prime wound up doing with his original check? Still, overall, this is a nice fun issue so awesome that Stan Lee (back in the days when he acting career was limited by Incredible Hulk TV Movies being the only Marvel live action work) wrote a letter telling Uncle Bob he was the man.

So, with Circuit Breaker, Donny, RAAT and the Cosmos' Companions stories all brought to a degree of closure, what's next for the American series? Well, it's going to be a combination of Hasbro mandated removal of two major characters (can you guess who?) and their replacement by two Bob picked new leaders (oh, that gives it away) that really suggest he's started taking the piss. 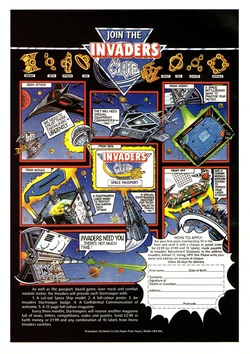 Makes S.T.A.R.S. look cool.
On the letters page Grimlock has another list of Transformers, this time from Stuart Hudson of Middlesbrough who has come up with 164. Grimlock works it down to 159, discounting Roller and never having heard of Staker, Slammer, Six Gun and Nightstalker (well, there was no Wikipedia at the time). Who'll be the first reader to push 200?

The big news on Transformation this week is Secret Wars II is concluding, but Spider-Man and Zoids with be featuring a new back-up dealing with the aftermath. Though it's unsaid that means the New Universe story the later was running must have been quietly dropped, suggesting the adventures of Spitfire and the Troubleshooters have their days numbered.

The start of her third adventure suggests this is a good thing, as we get some clumsy exposition about Jenny's never before mentioned ex-boyfriend. I wonder if he'll be popping up before not too long? Other than that and the introduction of the cop on the case not a lot happens and it really feels far too sluggish a strip for an action adventure comic.

Next week, the British comic starts to bridge the gap to Bob's killing of Megatron and Prime by giving them a non-crap final epic. 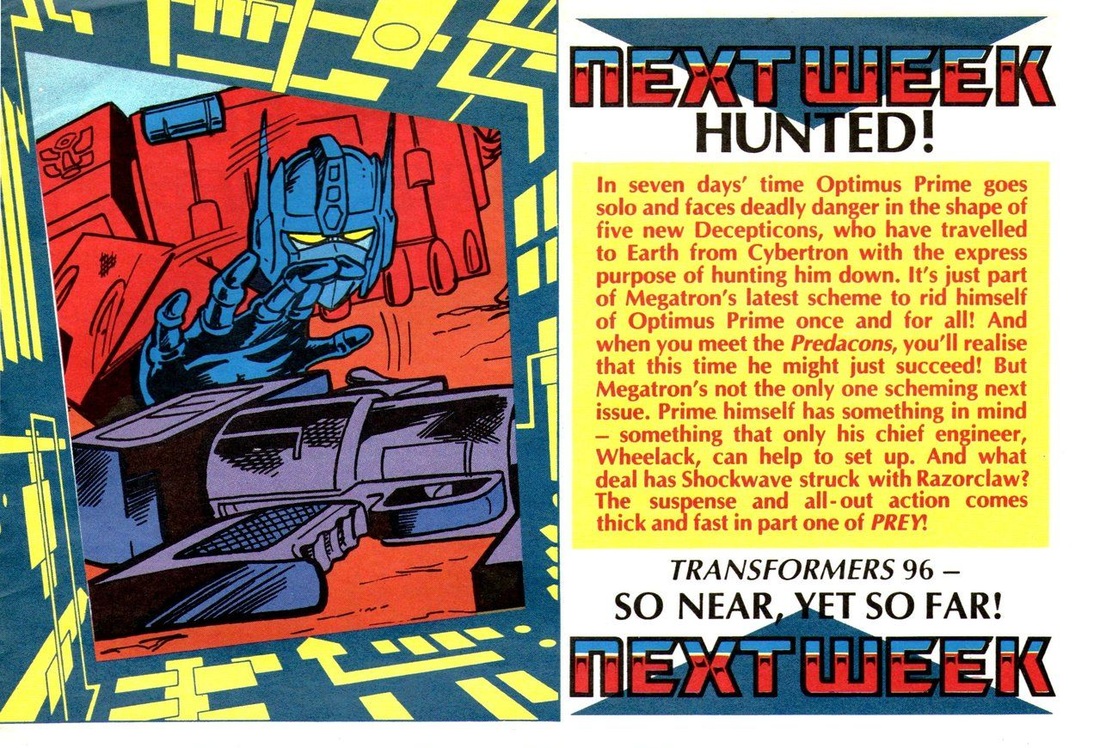