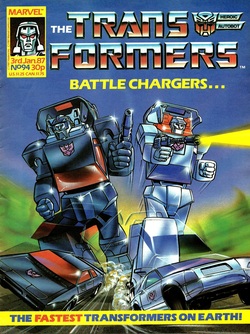 He he he! Let's tell the fleshlings what we think of them! He he he!

Happy 1987! Alright, once again this was actually out just before the end of the year, but I'm placing it with the year it finished its time on sale in just because that's the way I roll.

Our first story of the year is a bit of a strange one tone wise, wildly veering between some surprisingly dark for mid-period Budiansky material and some of the most over the top comedy we've yet had in the comic. What makes it work however is the writer seems to be more engaged with the material than he otherwise has been in months.

Things open with some genuinely nasty stuff as Circuit Breaker is lording it up over Skids, with his brain module detached and her squeezing it in order to make his faceless body twitch in pain whilst an increasingly guilty feeling Donny (now employed by RAAT and gets a snazzy branded t-shirt of the sort all secret organisations have) has to watch and squirm.

It's very well done and genuinely harrowing, with the side only being let down by Josie insisting on sharing her origin story again as a bizarre attempt at one-upmanship over the former Robot Master's experiences. 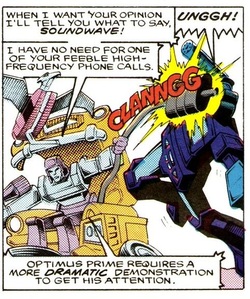 What a dick.
So to cut from that to Megatron sitting on a throne made of junk cars slapping Soundwave about for making sensible suggestions ("When I want your opinion, I'll tell you what to say") and sending the newly arrived Battle Chargers on a mission to challenge Optimus Prime to a fight for no reason (and which will never be followed up on), is more than a bit jarring. But also genuinely very funny.

It's not an original observation, but Runabout and Runamuck are to all intents and purposes Bevis and Butthead, even down to the "He he he". What I don't think Bob gets enough credit for though is how ahead of the curve he is here; six years before those characters first appeared. Across Transformers, and fiction in general really, attempts by middle aged middle class men to be down with the kids often wind up disastrous (hello IDW Verity), but here Budiansky successfully incorporates contemporary stoner culture in a fun and non heavy handed way years before anyone else would come close.

He's clearly also having a blast with it, the Battle Chargers get the best character writing he's done in ages, with it being especially nice to have two Decepticons who are genuinely friends who enjoy each other’s company rather than, at best, characters who bark orders at each other.

There may be a meta commentary from Bob in the way the Battle Chargers decide Megatron's plan is really stupid and instead think having some fun is much, much more sensible. Resulting in a riotous sequence of events as they piss about on the road, before latching onto a family on vacation whose son Noah (wearing a Spider-Man t-shirt in the original, if not the IDW printing) has a thing for doing graffiti everywhere he goes. 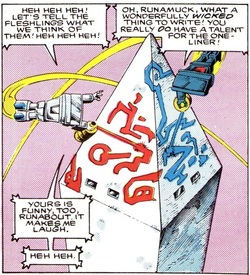 Nearly as funny as my captions.
So that's our threat of the week, two smacked up Decepticons following a family about and doodling their own graffiti on various American monuments. Isn't that just awesome? And also a very welcome break from the various serious (or at least attempted serious) stories of the last few months. The whole thing is played to the hilt, and the set up for the gag of what their highly sophisticated humour actually translates into English as is going to get a great pay off next week.

There's some more straight stuff involving Circuit Breaker, Barnett and Finkleberg discussing the various issues of the robot war (Donny's musings that the Autobots haven't shown up because of the way humans keep acting like dicks towards them is something that is going to be shown to be wrong a good few years from now), but even they get sucked into the silly side of thing as they have the Acton family awkwardly approach RAAT at the Washington Monument "crime" scene in order to say "These giant robots are following us, honest".

This makes for perhaps a weak cliff-hanger, but this is still a brilliantly daft first half and shows that coming up with the punning story title first (I'm sure you all know it's a send up of American Graffiti) and then working the whole tale around it can actually be a good thing. Which is lucky as Uncle Bob is going to do at least two more film spoof titles in the years to come.

Also, as brief and comedic as it is, Megatron's off his tits appearance here sets up the direction his character will be going in the next few American stories, this is effectively the beginning of the end for the original Decepticon leader.

"The film may still be on... somewhere"
After being coy about it for so long, this week Transformation is hugely excited about the Poster Magazine, but perhaps more telling is the comment that if kids hurry the film itself might still be at cinemas near them. That lack of certainty is not too good by today's standards, but considering it's only be out for two weeks and films tended to hang around longer back in the '80's (because of course they'd take longer to come to homes) that's fairly abysmal for what is supposed to have been a "Big" film.

Transformation is also still more excited about the build up to issue 100 rather than the contents of this week's comic, mentioning the exciting free gifts we'll be getting in issues 98 and 99 with more fervour than the misadventures of the Battle Chargers.

Grimlock is mildly surprised at the number of letters he's been getting from kids who have seen the film before its release, though Alex Chranzcy from Altrincham has the excuse of having been on holiday in Canada, the implication is everyone else has been up to something a bit dodgy. It's a good reminder in these days of torrents and file sharing that piracy actually was rife back in the physical media days and there were just as many boys who cried wolf claims that it would destroy the entertainment industry.

In this case, that's what happens when you don't release a film kids want to see until four months after it came out in America, no doubt VHS versions were doing the rounds of car boot sales and the playground for weeks before December 12th. Though I missed this at the time (though our eventual tape of the film was an illicit one ripped from the rental tape, the VHS used had previously had Nightmare on Elm Street 3 recorded on it and, as it was a longer film, if you sat through all of Lion's version of the theme tune you'd get an entirely unsuitable for children half hour) I do remember how the unedited American version of the live action Turtles had that similar playground currency.

As did Basic Instinct, but that's another story.

The second adventure of Spitfire and the Troubleshooters ends with Jenny (who, as far as I'm aware always wears knickers) defeating the highly advanced super powerful death tank that is the Behemoth by... Cutting the wire that runs along the ground to its base that the remote control signal runs down. I'm no military expert, but as much as the comic tries to make this seem like a good idea (supposedly because running it along a physical wire rather than radio prevents jamming) it really seems like a bad idea. Certainly I'm not aware of any current U.S. drones that work along the same lines.

Still, the issue ends with the promise of some forward momentum as Jenny decides she's as mad as hell and not going to take any more and plans to go fuck up Krotze real good. This will no doubt result in lots of explosions and violence that wouldn’t otherwise have happened if not for her. Our heroine ladies and gentlemen.


What’s really exciting this week is I believe that’s Lee Sullivan’s first work on the cover, it’s not his best (he freely admits it took him a while to find his groove on the book), but he’ll go on to be a favourite artist of mine so it’s nice to see his arrival.

Next week, it's the big climax (he he he, big climax) to both the adventures of the Battle Chargers and the story arc of Donny Finkleberg. Yes, after fortyish issues it's time for this much loved character to depart, but will he go out on top (he he he, on top)? 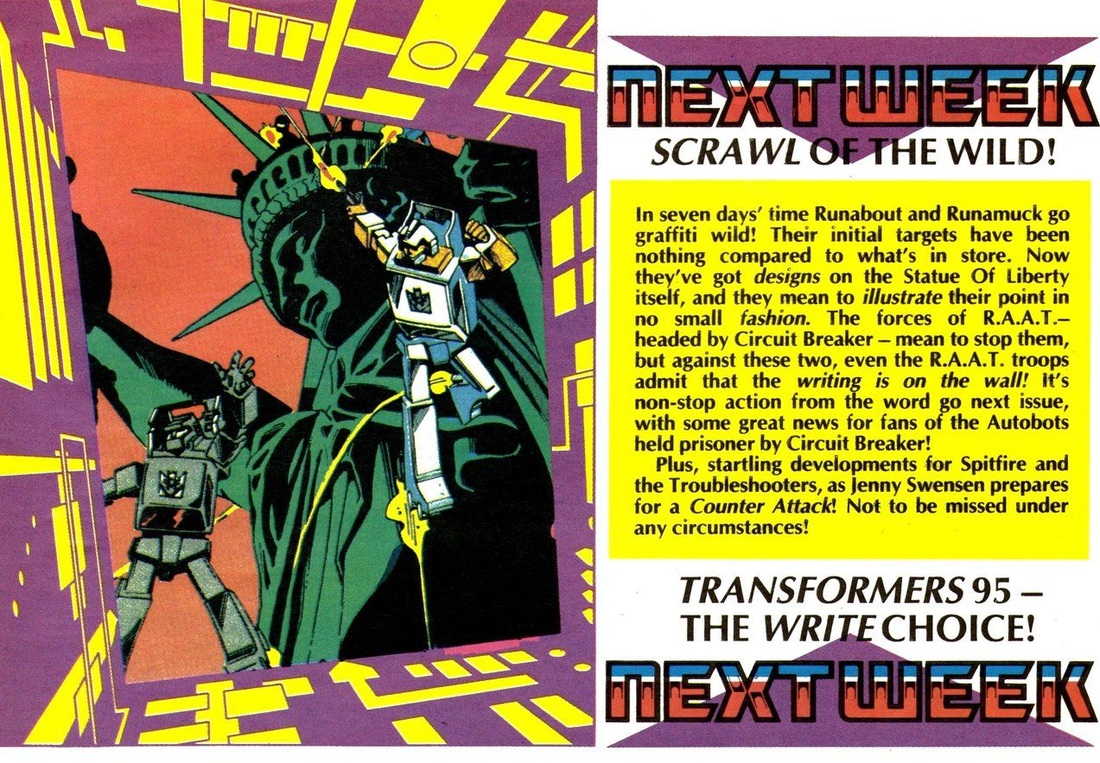