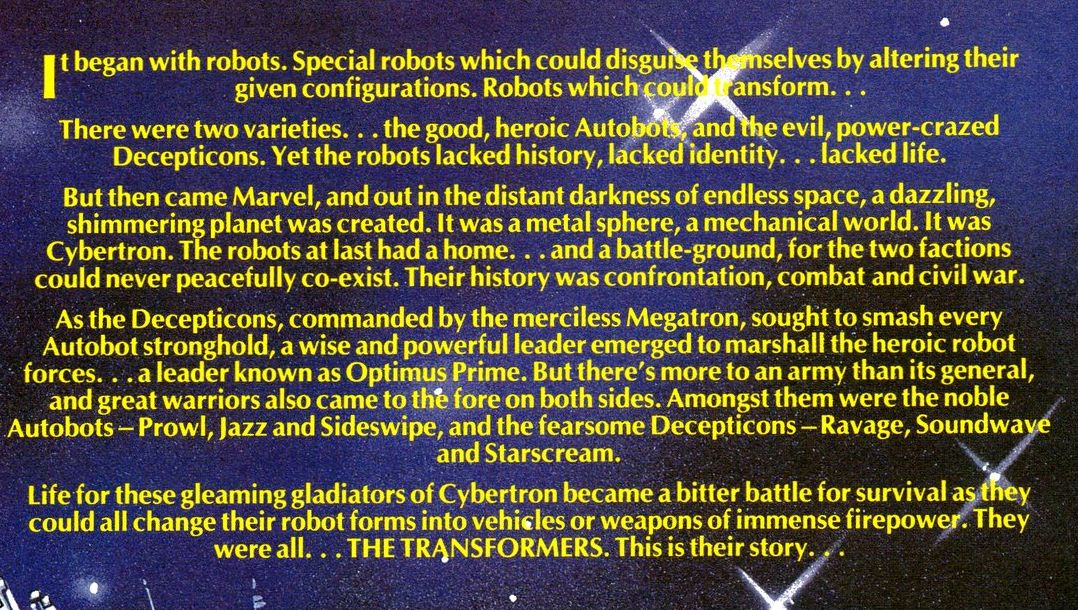 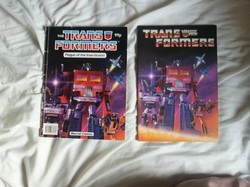 Collected Comics 4: The Enemy Within.

Plague of the Insecticons.

We have a feeling you're gonna' enjoy it.

As you can see from the above list, not only do we get a drastic increase in the number of reprint specials in 1986 from the simple two in the previous year, we also get a bit more variety in how they're presented. Whilst subsequent years will mostly stick to the Collected Comics style, here we get no less than three different sorts of reprint. Even more surprisingly, despite only being into the second year of the reprints some of this stuff is now into its third time round.

First up, we have our two regular Collected Comics, containing the first two British stories in the full colour format with which we now know them best. Unlike the first two in the series these are bound more like regular comics and as such are a bit cheaper, and all four parts of Man of Iron and the first instalment of The Enemy Within have all been given new subtitles (the rest of the second story had them already of course).

Once again these are presented as ancient historical artefacts from before memory began, and indeed they did indeed take on a special significance as, during the years when it seemed as if Furman's embargo on reprints of these stories would forever prevent them being seen in trade, these were the best way for fans to track down a copy of them. As such I'm very fond of these two books, and the full colour work on Man of Iron pisses from a great height on the American attempt we'll be talking about later in the year. 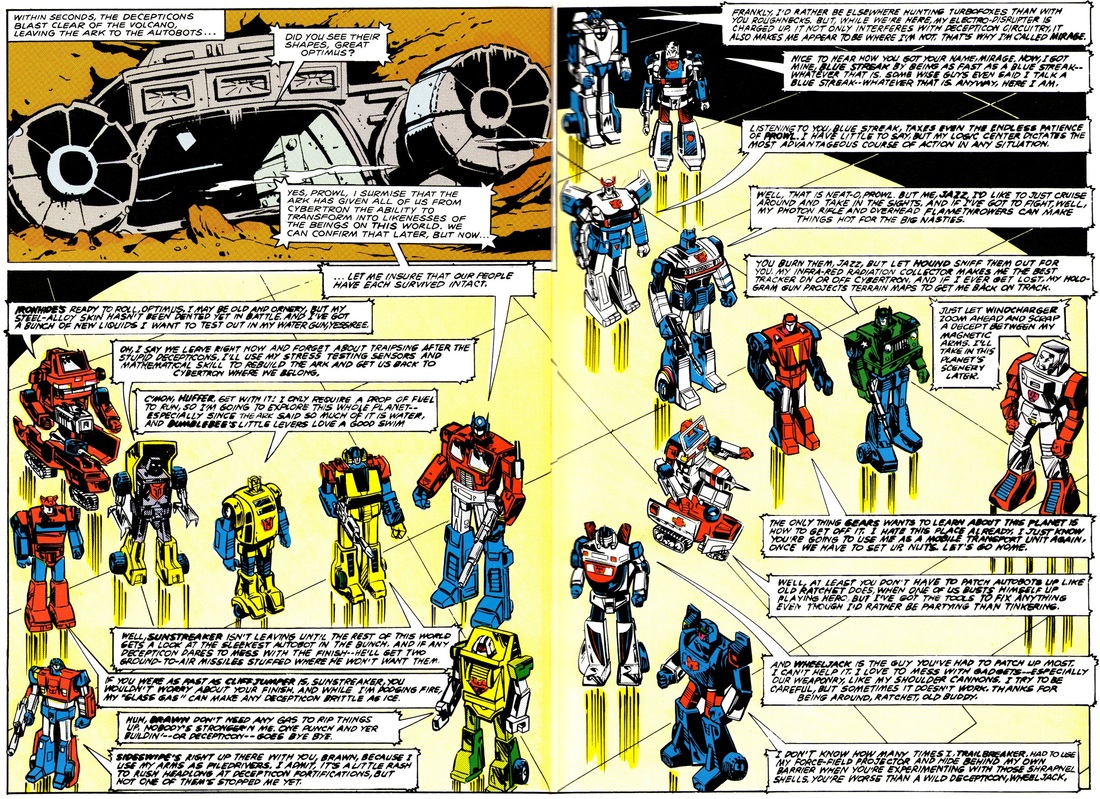 The full altered spread.
The Complete Works Part 1 is another title I think a lot of British fans have a degree of fondness for; clogging up charity shops for years it was the first exposure to the origin story for many of us.

Whether, as the overly ambitious title suggests, there ever were any real plans to collect the entire series this way is hard to say (they will only manage one more book), this annual style tome collects the full colour version of the first two American issues once again. This time the Autobot spread is actually contained within the story in its proper place, but it seems its misuse as various posters had permanently damaged the master the UK had been given as the top left panel on the spread (where the Transformers logo was placed in the poster version) has been replaced with some Geoff Senior art from Crisis of Command. Which you can now see on this very page.

Lastly are a couple of odd titles. Plague of Insecticons!, is straightforward enough, a large format paperback (similar to but with a firmer feeling cover than the first two Collected Comics and the Winter Special) reprinting the two comic stories from the first Annual. A simple example of money for old rope.

However, also out this year was a paperback reprint of the entire Annual (indeed, though that name has been removed from the cover it's still referred to as such on the copyright page), and I'd have thought doing both within 12 months of the original is more than overkill. It's not clear which came out first, data on the full reprint seems to be pretty scarce, but it must have hurt sales of the second one. All I can think is, one was done by Marvel and one by Grandreams, independent of each other, an idea backed up by the copyright pages which only mention Grandreams on the full reprint. Either way, this is probably the most overt sign to date of how early in the days of licensed toy comics we are, with every idea being thrown at the wall to see if it sticks, this particular experiment won’t be repeated and as such was most likely a failure.

I don't have scans of the full reprint (as well, it would be pointless), and as such can't present the cover by itself, but look to the top picture to show the difference.

And hello to Mark Devinis who owned the full reprint. How does it feel your parents were too cheap to buy you the hardback version?

And with that mockery of a small child through time, it's on to 1987 when normal service resumes on Friday. Having done a lot of specials and addendums in the last couple of months I'm going to give you all a bit of a breather for the next couple of months by limiting myself to the weekly issues, but do keep an eye on the main page as I experiment with more YouTube videos, I'm going to try and do one or two a month.

And finally, thanks to regular reader Chris Chapman offa the Doctor Who DVD’s for pointing out I completely forgot the very good Return to Cybertron  two parter when summing up the American stories of 1986. Bloody readers, paying attention to things... 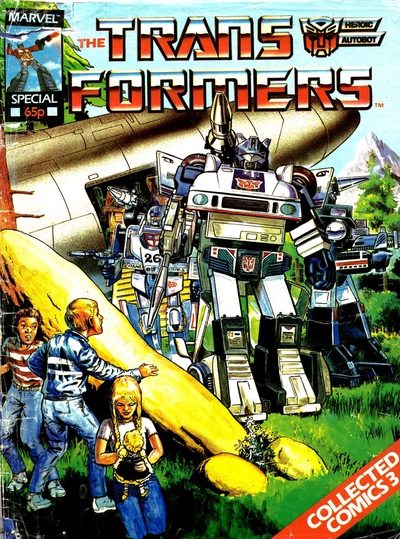 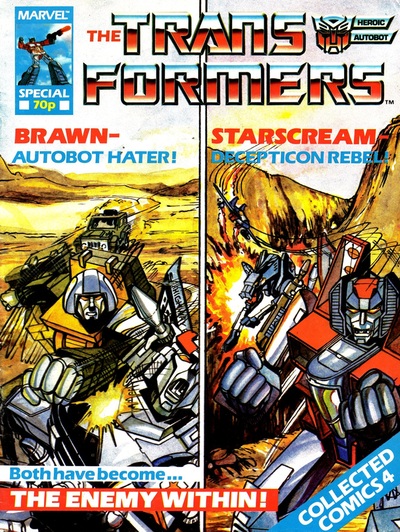 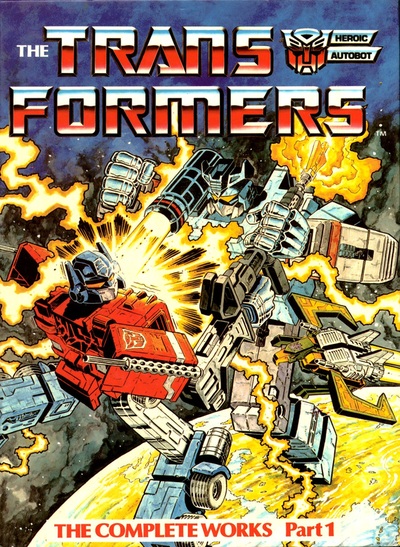 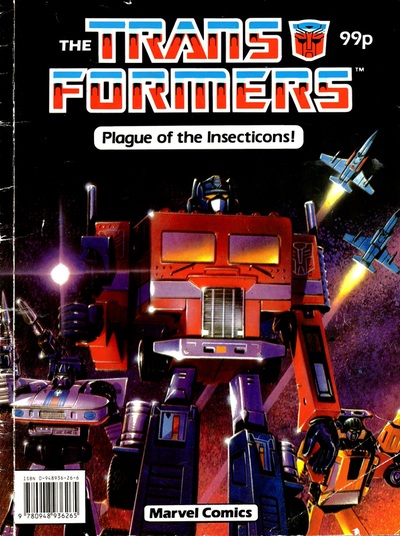 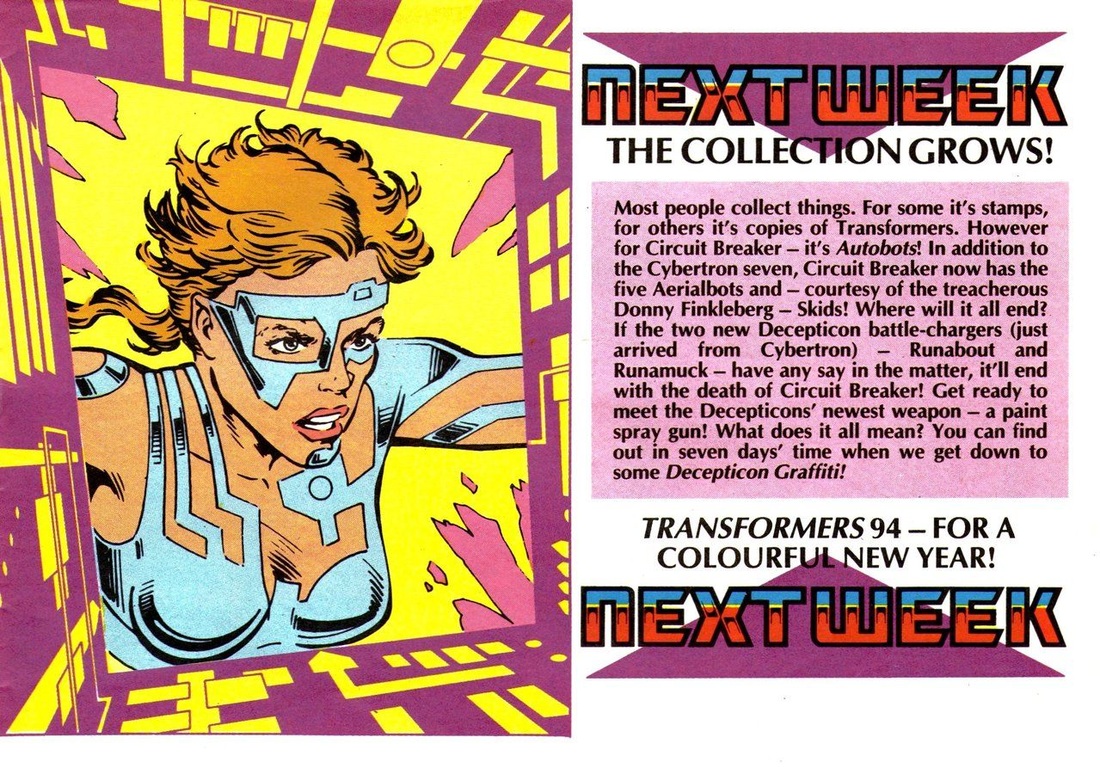