Step Aboard A Boeing Going High. 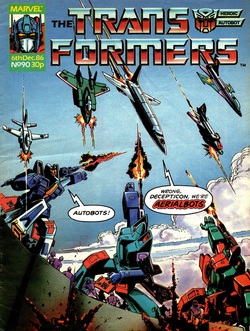 I almost forgot--humans don't bounce very well do they?

The above quote sounds like the sort of fiendishly evil thing a Decepticon would say whilst threatening a poor defenceless human doesn't it? Those of you with a memory long enough to recall Jazz threatening G.B Blackrock in a similar way may have correctly thought it might be an Autobot, but how many of you without checking would have gone "Well that's obviously Jetfire that is?"

All of you of course, because a blog devoted to an overly in-depth look at this story is going to attract the sort of reader who really knows their stuff, but that doesn't really change how truly and utterly nuts the opening page of this issue really is.

In what helps make this half-instalment feel like it was intended to be read this way we rather neatly get bookends dealing with what Donny has Christened the Cybertron Seven (or what we call Blaster and Those Other Guys). The first of these has the former Robot Master taken to where he claims the Space Bridge materialised by Jetfire, who is written in such a way as to suggest that, as with Grimlock, his long absence has resulted in Budiansky forgetting what his character was.

So, the well spoken built on Earth scientist is suddenly reminiscing about games he played on Cybertron and being a complete and utter dick, shamelessly mocking Finkleberg and dropping him from a great height for shits and giggles. It's utterly bizarre but strangely entertaining, setting up a plot for next week as they find a trail of Transformers fuel ("THE LIFEBLOOD OF MY PEOPLE!") to follow. 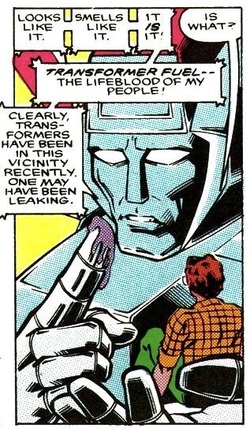 Looks like seamen, smells like seamen... tastes like seamen.
Unfortunately for the next 10 pages it's back to the Hoover Dam plot. There's precious little to say here, there's a lengthy (though at least with some nice banter, Air Raid is a star) fight between the new characters before Ricky's love for his daughter lets him overwhelm Bombshell's mind control and blow up the Big Drill using Megatron. Megatron's lack of control over his trigger is something that is often mocked, but frankly it fits in fine with the overall tone of stupidity.

The big thing of course, is the full début of the Aerialbots, but this is handled very oddly. We're constantly told they haven't been properly programmed and don't have full personalities yet, but there's no hint of that in how they act, which is not only consistent with their official profiles, but if anything has most of them showing off more personality than they ever will again. This means the entire subplot of Silverbolt having to act as their moral compass when they combine in order to stop Superion crushing Ricky doesn't come off.

What's really odd though is the whole idea of the non-Silverbolt Aerialbots having nothing but disdain for humans comes right from the cartoon two parter The Key to Vector Sigma. It's possible that this is something Bob came up with as part of his background for the characters and its use in both stories is simply born from that (though the TV story aired a the best part of seven months before the publication of the original US issue in June 1986), but frankly it's so much better integrated in the cartoon-where the Aerialbots properly learn from their mistaken assumption whilst here they'll just have their minds wiped by next week making the whole experience pointless- it's hard to see this as anything but a rather shameless rehash. 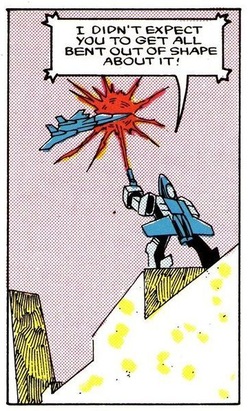 Air Raid sans personality. Can you tell?
And when your character development is less convincing than the G1 cartoon, especially for a character arc the TV Aerialbots go through again in War Dawn, you know your story is in trouble, and the fact he's so cheerfully recycling TV episodes (and as a piece of supporting evidence that this was intentional, the issue ends with a visual lift from the series, as we'll see....) shows little Uncle Bob really cared about the Special Teams. Tellingly the only proper lasting consequence from the entire dam section of the issue is Bombshell hoping a lift on Silverbolt to the Ark.

The issue ends with our second Cybertron Seven bookend, as it turns out their bodies (I can't at this point remember how it will be revealed they were overpowered, let’s hope the explanation won't wind up being really stupid) have been taken to a hanger run by our new Evil Human Organisation: RAAT, which of course stands for the Rapid Anti-Robot Attack Team.

For the last few weeks we've had hints that one of the Autobots biggest enemies was coming back, and here that pays off in the long awaited return of- in her first appearance since last Christmas in fact- Circuit Breaker as the head of RAAT.

She's taken to mounting the captured Autobots heads on her wall, just like Lord Chumley in Prime Target, except of course the Lord was a more rounded and realistic character than Circuit Breaker ever will be.

Even allowing for the fact UK readers wouldn't yet have seen either episodes of the show this story borrows from (indeed, it's unlikely Prime Target made it over here till the DVD's at the turn of the century), the net result is still a very lazy, tired feeling story that only sporadically seems to give a flying fig about the character's it's tasked with introducing. It says it all that Jetfire is the best thing in it and he's wildly out of character, throw in the threat of more Circuit Breaker action and it's easy to see why the British team have been so keen to reassure readers that things will get better with issue 96. 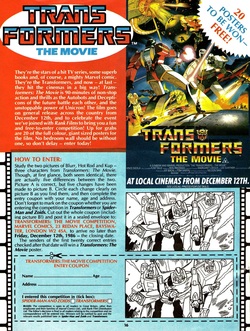 How many can you spot?
Transformation reveals that the Winter Special I covered two weeks ago is out now, even if any mention of the Poster Magazine is still conspicuous in its absence. In a rare bit of cross-promotion between the book and other Marvel titles it reveals that issue 40 of Spider-Man and Zoids will also feature the same competition as this issue.

Said competition is for a full sized Transformers: The Movie, poster of the sort, for example, you get with the Poster Magazine. It's a spot the difference quiz using Will Simpson art from Target: 2006, and annoyingly I've only spotted three of the five differences thus far.

On Grimgrams, Paul French from Sutton Coldfield has risen to the challenge set by Paul Darby when he came up with 145 named Transformers characters (Grimlock now accepts Gnaw and Telus) by coming up with 154. Of these Grimlock discounts Guardian (not a Transformer) and two he's never heard of, Scamper and Time Warrior (the latter being one of the watch toys you got with S.T.A.R.S. More on that in a second), leaving the insane figure of 151. Blimey.

Also débuting this week is the first advert for the aforementioned S.T.A.R.S. This of course stands for The Secret Autobot Rescue Squad.  This club will never be done in the UK with the same level of effort as it would in America, basically boiling down to you getting the cardboard command centre and a big poster of Magnus and Galvatron for your £4.99 plus Robot Points (mind, though it’s not mentioned in the advert it’s likely Time Warrior also made it over here so Paul French could know about him).

Only pausing briefly to mention that there are no excretion jokes in Robo-Capers this week, we arrive at the final part of the first adventure of Spitfire and the Troubleshooters. Jenny winds up beating the new suit because even though hers isn't supposed to have any weapons it does have all sorts of tools that look like and work like weapons. I’m currently rereading the first Ringworld novel and it reminds me of a sequence there where Nessus reassures everyone that they haven’t brought any weapons with them on their mission of exploration only for Lois Wu to point out all the guidance lasers and digging tools double up remarkably as vicious killing machines.

Spitfire then lets her father's killer go because like all good Marvel heroes, even New Universe ones, she will not kill and will wait to get proof. Simply turning him in for using his toy to try and kill her and her friends never seems to occur to her.

Oddly, despite digging out a cave last week the team then go head out to set up their secret base elsewhere. Even more oddly, and perhaps tellingly when you consider these characters were very quickly dropped from the series, the titular Troubleshooters play no part whatsoever in the resolution.

Next week it's the last issue before the release of the film, though you'd not know from reading it as we get the formal introduction of the Stunticons and as such Budiansky continues to show a firm lack of interest. The question is, after such a poor issue can the quality fall any lower or must we be due an upswing by default?

And will Circuit Breaker switch her sticky back plastic costume for one of the fetching green overalls and hard hat loot sported by Team Raat? 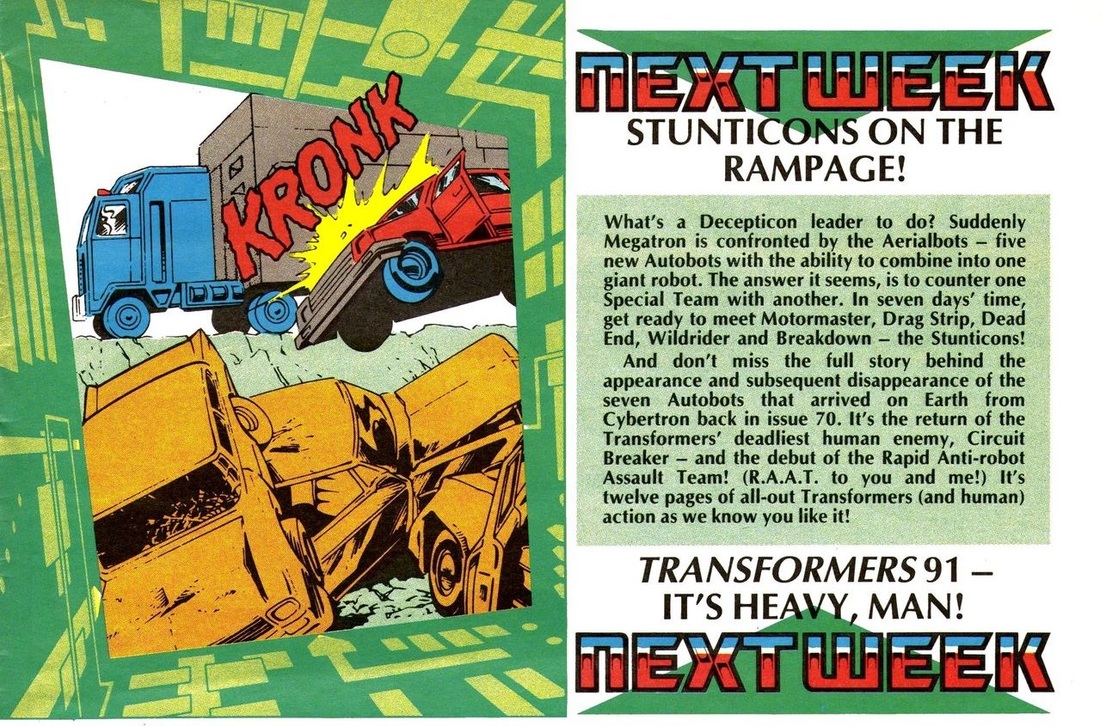