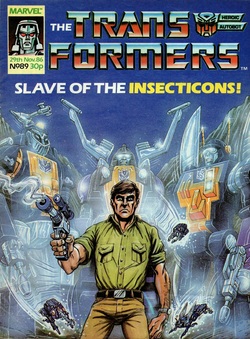 
Enough of these games, Insecticons...


The first American story to follow four grandstanding months of British material was always going to be in a tricky position. If we were looking at something of the quality of The Smelting Pool!, this would have been a fairly smooth transition. If it had even been on the level of Showdown! it would have still been a comedown, but we would have still been in for some good harmless fun. Unfortunately what we get is easily Budiansky's weakest story since he dared to ask the question "What would happen if a gangster got hold of Megatron?"

The reason for this lack of enthusiasm is readily apparent, the Special Teams are finally being introduced, and it's fairly obvious Uncle Bob couldn't give less of a toss. This is the first of four Bob stories in a row to be tasked with bringing in new toys and the only one of them that isn't terrible is the one where they don't combine, and subsequently the various gestalts will generally be treated as a contractual obligation rather than characters he has any interest in.

This will actually have one positive effect in the long term as the various Special Team members will, whilst not getting a huge amount of focus, be able to avoid the cartoon situation of rigidly hanging about in their sub group, creating a situation where they actually might have other friends. However, for this story the result is a bit of a disaster. 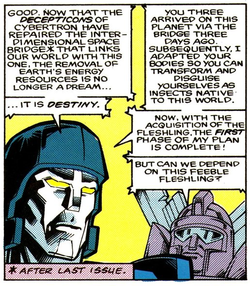 "As you know, your father, the king..."
Sign Bob isn't really that invested 1: The plot is based around the Decepticons trying to steal energy, something that hasn't really been a feature of the comic for a good long time, but was a staple of the cartoon. With the focus being Hoover Dam (let’s hope none of this wakes up Movie Megatron), this winds up feeling like another More Than Meets the Eye retread and is the most generic G1 plot possible.

Sign Bob isn't really that invested 2: Despite the title the Aerialbots don't actually début properly here, as we're told by Wheeljack only Silverbolt has been fully programmed. A clever satire on the poorly developed nature of most of the characters, or a rather biting commentary on what he thinks of the toys he's got to work with?

Sign Bob isn't really that invested 3: A general air of sloppiness about the whole thing. Brainwashed human Ricky Vasquez wanders past a security guard at Hoover Dam holding Megatron without it being noticed; Megatron gets an incredibly torturous paragraph explaining where the Insecticons came from that's exactly like the prose I mocked in the film comic last week; there not actually being any need for the human slave (complete with what feels like endless scenes of his family), other than Bob preferring to write humans, as the Insecticons could just as easily fly into the dam in their tiny modes and achieve the same result.

Of course, some of the problems are those related to it following up on Target: 2006, and as such beyond Budiasnsky's control, even if the end result is still as flawed. Obviously there's a serious downgrading of scale (even compared to In the National Interest), resulting in Prime's claim that Blaster and company's arrival from Cybertron is the most important thing to happen since issue 1 seeming utterly ludicrous, has no one yet filled him in on what happened over the last five days?

The return to the Skids and Blaster plots after such a long absence is another unfortunate side effect of the UK stories (though Bob himself didn't help by ignoring the Blaster stuff for two stories himself), all sense of momentum has been lost and it's increasingly hard to keep track of, or indeed even care about these threads.

Even the little things don't quite add up, such as the 4th of July dating placing it before the October date Hot Rod set his time machine for a few weeks ago. It's odd the comic goes to the effort of changing a "See issue" box referring to Prime's hip injury- so readers are pointed to the pimping of issue 100 on the Transformation page- but it didn't occur to anyone to change the Independence Day references to Thanksgiving. If nothing else it would work better with the general "Real Time" ethos of the British stories, I've no idea if Americans do fireworks for Thanksgiving, but that's a fudge that would still fit its placement four weeks before Christmas a lot better. 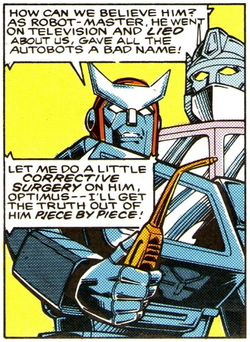 Worryingly Donny Finkleberg gets a nice scene as well, and when he's one of the best things in an issue something has gone very wrong indeed. However, his attempts to convince the Autobots he's genuine whilst Ratchet openly mocks him (and the moment of him suggesting cranial surgery is proto-James Roberts Ratchet) are genuinely funny. Despite having only just arrived, he and Skids are sent off to prove the human's story of an arrival from Cybertron, the results of which will suggest Ratchet was right with his lobotomy idea.

Despite the bizarre art goof as Ricky enters the dam, Don Perlin gets some nice panels in. There's a lovely silly one of Megatron chilling out leaning against a rock face and, as always, the space bridge (this time complete with big drill thing for draining dam energy) is an arresting image. Though once again Yomtov lets the side down with his crayons; the Coneheads come over the bridge as well (and despite both them and the Insecticons having hung round with Straxus previously this is very much treated as an intro issue for all six characters), so good luck trying to keep track of which one is which thanks to him not being hugely bothered about accuracy. Mind, the pink neon highlights they fetchingly model in one panel must have had a huge influence on the designer of the bulk of the G2 toys.

A few good points aside though, this is a poor read. Will Superion Vs. The Coneheads manage to salvage things next week?

Transformation tries gamely to suggest this story really does follow on smoothly from last week (though if you think Megatron has decided to pimp for small scale energy theft because he's pissed as what Galvatron did to him you're a better person than I), but the most interesting stuff is in the sidebar. As well as talking about issue 100 in a way that feels slightly "Don't worry kids, it'll be good again soon!", it's also revealed that the intended UK reprint of the Universe book will now not be happening. There will be a British edition of the trade down the line, but for now the weekly has come up with a solution that will give readers all the profile goodness they can handle. 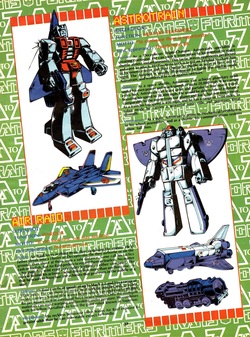 Start of an era.
Yes, this week sees the first A-Z, if you're going by the contents page that is. The background on the page itself has it as A to Z, it'll be interesting, in the loosest definition of the word, to see which sticks. This is an alphabetical two at a time on one page reprinting of the main Universe profiles, ignoring most of those from the film (of course, those for Magnus and Galvatron were basically only just used and they probably didn't want to kick off the series with Arcee), on a snazzy new background and with altered first appearances. Ironically this first entry includes in Air Raid a character who only appears for the first time this issue.

This series, which will, on and off, carry on past the Universe trade right through to the very end of the life of the comic, is for me the definitive version of the profiles, and certainly adds more rich background detail than the old Inter-Face used to. Indeed, I find it hard to read the Universe book for the deeply unfair reason it just looks wrong. Though for this first one the background makes the text almost unreadable, something that will be fixed in future by adding a white box around it.

Grimlock is in a heavy foreshadowing mood, including musing at James Binns from Brighouse that Prime on Cybertron "Couldn't possibly happen... Could it?" We also get another sign that, at least at this point, the UK team knew what was coming from America much further in advance than is normally made out to be the case as he wonders what would happen if Prime ever vanished permanently, "Could be a cue for someone to step in as the new Autobot leader. Someone like me!" (King of the Hill was, according to the wiki, first published in America in December, or just after this UK issue went out). As mentioned previously this is roughly the point Furman stops writing the letters page for a few months, but if that transition has already happened it's been a smooth one.

There's also the advert for the film I linked to when discussing its release date a few weeks ago, and yet more bodily fluids humour from Robo-Capers, which has really started to hit its stride over the last month. Maybe that just says something about my sense of humour.

Spitfire dons her robot suit for the first time and digs out a secret cave base, and perhaps oddly winds up fighting her suit's own evil predecessor, which isn't the sort of thing you normally do for a first story. Most series would usually wait until the lead has been more established before doing the KAAR thing.

The big tension for next week is: Will A-Z be more easily readable?

Over at my home away from home that is TFArchive, we’re doing a poll to find out the top 30 Transformers characters of all time. Someone has voted for Circuit Breaker. To reduce the chance of her winning, go HERE to cast your own vote before the end of February. 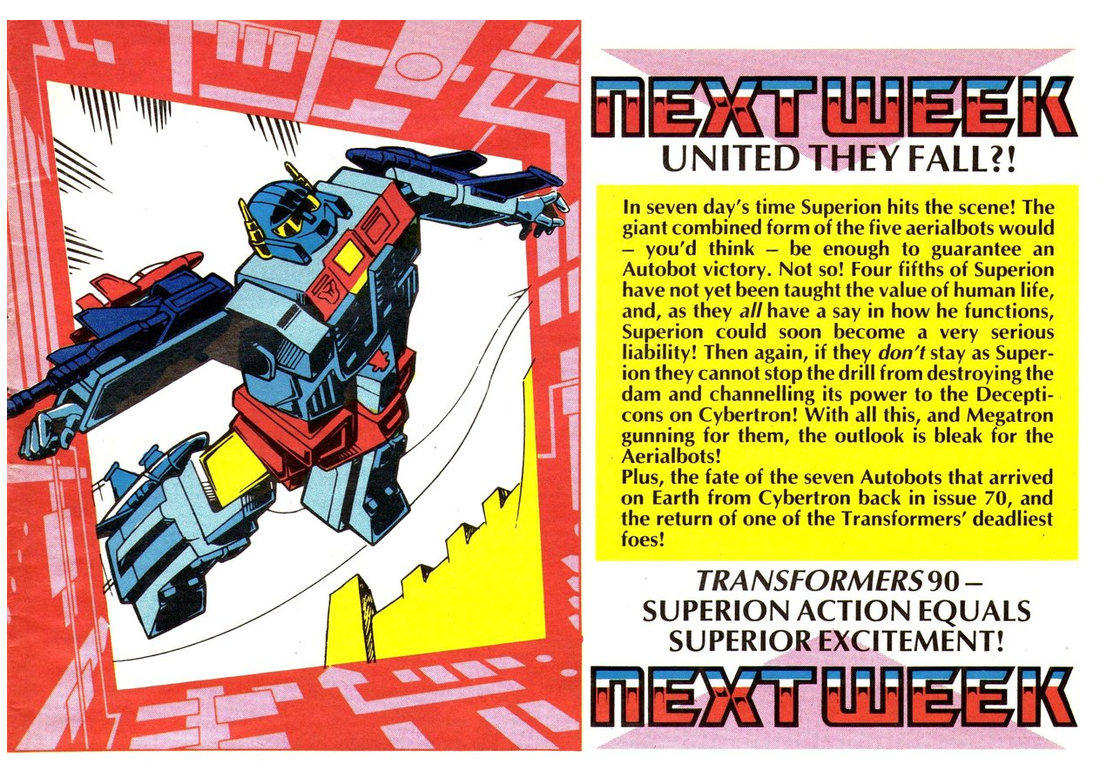 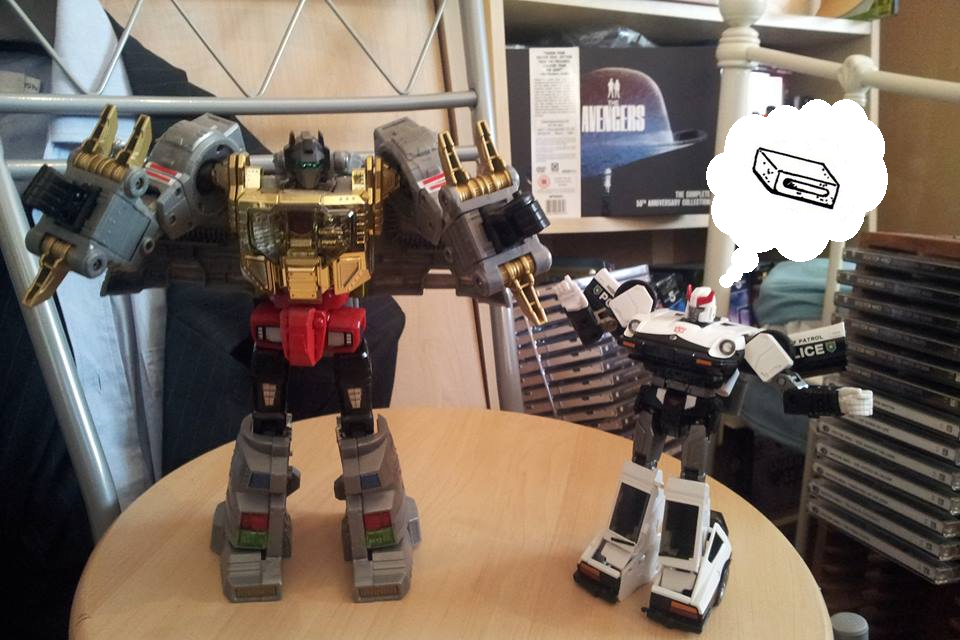 I totally went there.