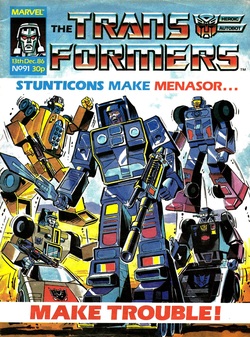 I leave the thinking to others.

Exciting cover developments this week, as Heavy Traffic becomes the first American story since Spider-Man not to reuse the American cover on either part. This will become standard in 1987, partly because the American covers weren't felt to be all that great, partly as a way of putting an extra 26 pieces of work towards the local artists. Here though it's because the original cover from US #22 was part of a celebration of Marvel's 25th birthday where all that month's comics featured a big close up of a lead character's head surrounded by a border of Marvel heroes, so for example Snake Eyes was front and centre on the G.I. Joe cover.

As well as being somewhat unsuited to the British comic as there were no similar celebrations in the UK, the fact the character chosen to represent Transformers wasn't one of the big iconic, or at least recognisable, lead characters as the rest of Marvel's output opted for, but Menasor- indeed, a slightly off-model Menasor- also counted against it. He might make a pretty impressive sight in a full body shot, but as a face he's hardly one that screams who he is, especially in a book where he hasn't actually appeared yet (or hasn’t been featured in months in the case of the UK). So whilst the covers for both this and next week aren't the best the home team will ever produce, they're still a step above what our poor American cousins got lumbered with.

All of the above is of course mainly to try and avoid talking about the actual comic, due to the way the Aerialbots were introduced being so poor it has made me want to put off the Stunticons début for as long as possible. So the question becomes, can Budiansky summon up any more enthusiasm for the ground based Special Team?

He gets around his apathy in this first half by mostly ignoring the Stunticons for as long as he can. So the first three and a half pages are more concerned with housekeeping as we finally get a detailed explanation of what happened to Perceptor's Protectors, five months since they last featured in any prominent way.

This is done thanks to our old friend Circuit Breaker doing a show and tell for Walter Barnett (back to being the sensible member of III after experimenting with being a bastard during In the National Interest) about how awesome her RAAT team are. Her take down of the Autobots isn't actually as silly as I was expecting, involving as it does strategy and her working as part of a larger group. Still, silly is relative when you're talking about a naked woman who shoots electricity thanks to atomic powered micro-batteries, but it could have been a lot worse. 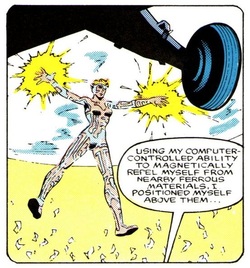 She's basically got her tits out there hasn't she?
We do still have to put up throughout the story with her constant inability to listen to common sense about who the good and bad guys are, but there is a nice moment that sets up the main theme of story as she refuses a check from Barnett because she doesn't do this for the money. This does also make you wonder, considering how dedicated she is to the death of all robots, where RAAT were whilst the Transformers were fighting in quarries (indeed, as the main Decepticon base is a known factor why has no action been taken against that location?) or driving future Decepticons down the freeway. Not for the last time, Circuit Breaker seems to be strangely half hearted in her life's mission.

The flip side of this is shown back in the Ark, where Donny continues to be treated as a piece of shit by the Autobots and is, understandably at this stage, only in it for the money. Optimus and Skids really are complete dicks to him here, stealing the check Walter gave him to play Robot-Master and holding to ransom as a way of forcing this human to go with Skids in pursuit of Blaster's Brigade so that if he's leading the Autobot into a trap... Well presumably the intent is he'll die horribly as well. Which of course is likely to be the case even if he is being completely honest as they’re pursuing something unknown that has successfully removed seven Transformers from play. Whilst Prime being cautious is sensible it would at least be fairer to keep Donny hostage in the relative safety of the Ark rather than sending him into certain death, he was less harsh on actual murderer Professor Morris after all.

Whilst this is going on, Optimus is having the wound in his shoulder attended to properly by Ratchet, complete with another UK edit to a “See Issue” box promoting issue 100. It's one of the strange dichotomies of the story that in order to work it expects readers to remember the events of stories five months ago but not how he actually was really injured in a slightly more recent American story.

Still, this is the way Bombshell fires one of his cerebro shells into Prime (why not just shoot him in the back of the head with one as he'll do every subsequent time he takes over someone?), which seems to be setting up an exciting Evil Prime story. But no, it's just the latest, and with contact with Cybertron now more firmly established removing the need for built on Earth introductions, the last excuse to give the Decepticons access to the Creation Matrix (remember, Uncle Bob would never explain where the Combaticons and Protectobots came from, whilst them being created by the same link works for the UK continuity as far as Americans are concerned they could just as easily come from Cybertron).

Exactly how this works is a bit odd, Bombshell's shell can't control Prime, but does bug him so that not only can Soundwave listen in to all the Autobots conversations but also to siphon off Matrix power and pump it into Megatron and then the newly built Stunticons (who were either knocked up in 30 seconds or having been laying about lifeless for a while on the off-chance). All thanks to Prime deciding to use the Matrix because he's mentally killed the Aerialbots for failing last week, including poor old Silverbolt who did perfectly well and despite the fact the others hadn't been completely programmed yet. Prime really is a bastard here isn't he? 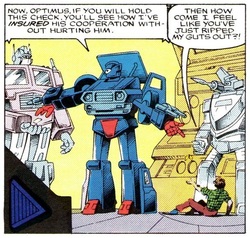 And then jazz can shoot his flame-thrower at him.
Compared to all that, Skids having a sleep mode button he needs pushed in order to nod off which is both inaccessible to anyone other than a human but which he also shows to Donny despite having a low opinion of him seems almost normal.

Almost but not quite.

With the Decepticons tracking Donny via another Bombshell bug, the story contrives to give Skids' location away to RAAT via a handy fallen electricity pylon that requires him to turn into robot made in order to save a motorist. Seeing this on TV sets Circuit Breaker off, but maybe she's only being proactive this time because her boss is there to watch her. This situation also makes Soundwave worry it could gain the Autobots sympathy, so Megatron agrees to send the Stunticons off to deal with the situation. Which is odd as it suggests he'd not have bothered using the tracking device to his advantage if the accident hadn't happened.

This leads us to the cliff-hanger as the Stunticons come tearing down the freeway with violence ensuing. The UK team have actually swapped the panels on the bottom half of the last page to create a more dramatic ending, which actually alters the meaning of what happens despite seeming a very simple change. In the original, Motormaster attacks a truck that's trying to escape before Wildrider points out "The vehicle we seek", this happening the other way round in the British version results in it looking as if the truck is what they're after even though this makes no sense. The full changed page can be seen at the bottom of this entry.

Thankfully this is a big step up from last week, there's lots going on, a few nice bits of humour and even Circuit Breaker is only briefly annoying. There is however, still not a huge sense of any enthusiasm, and things like the off-button and Prime being a prick to the Aerialbots don't even remotely work. With all this achieved by Bob just ignoring the Stunticons, it'll be interesting to see how things crash and burn when we get into the half of the story that can't help but focus on them. 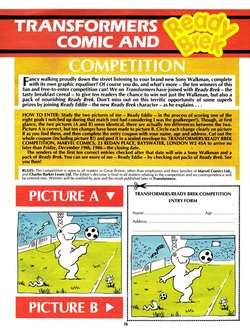 That glowing feeling.
As a whole, what this issue is best remembered for is the replacement of Grimgrams with Film: 2006, a spoof of the BBC's flagship Barry Normal hosted film show, complete with correct logo for the time (and by correctly predicting that the 21st century version of the program would use the full year in the title- when, for example, the contemporary version was just called Film '86- we have the one and only claim about future Earth the comic would ever get right). Grimlock's Dinobot-centric review of the film is rightly much loved for being very funny, but there are two other things about it which don't get commented on. First is the fact it continues to play the claim the film is set in 2006 to the hilt, even in a piece that points out the film is like the cartoon and full of factual errors (ironically considering what happens later Buster being called Spike is held up as one example).

Secondly, I believe this piece is the first place to make the Autobot Matrix of Leadership and the Creation Matrix one and the same (whilst this is clearly the intent of Hot Rod’s lines in Target: 2006 he could still potentially have been talking about the computer program rather than the bauble). A seminal moment.

Robo-Capers also has a famous and much shared tie into the film as Grimlock goes a bit mad with power over becoming a film star. Note how Lew Stringer does this economically in three panels; Uncle Bob will drag out a similar storyline for the best part of two years.

We get another Spot the Difference competition, this time in association with Ready Brek, and for the much more impressive prize of a Sony Walkman, resulting in a more fiendishly difficult challenge of finding ten differences. Though I'm now so good at these I needed almost no help to find 9 of them. Go me.

Spitfire and the Troubleshooters kick of their second adventure, which spends an awful lot of time on a skunk who isn't doing anything more interesting than smelling. Uniquely there is a proper crossover with another Marvel UK title as it seems Spitfire has appeared in the New Universe strip being reprinted in Spider-Man and Zoids, where she was visited by some Mystery Man who told her not to use her powers lest she accidentally do something interesting enough to stop her book being cancelled. True to her word, the best she does here is rescue a truck full of hillbillies from driving down a slope.

Next week we're in the insane situation of Walter Barnett: Superhero. But at some point before that I'll be looking at a little movie that came out on the Friday before. If you're lucky possibly in the form of another badly filmed YouTube video. 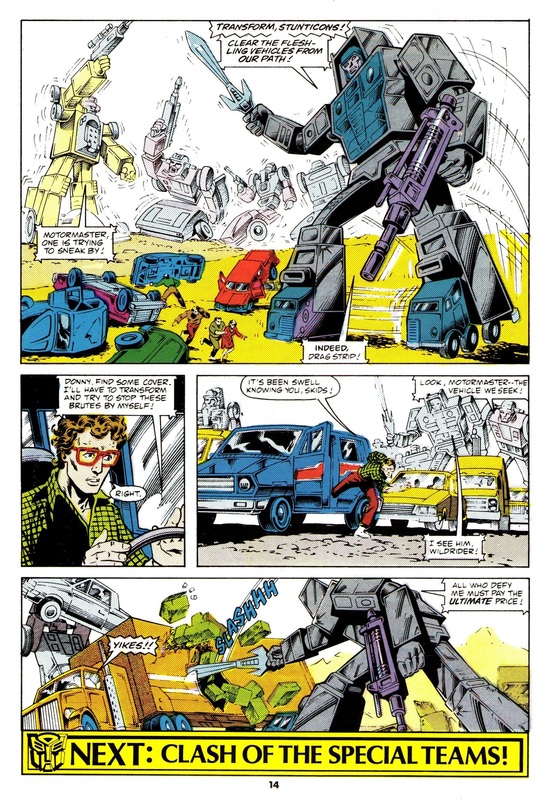