Lost in Space, and in Time. And Meaning. 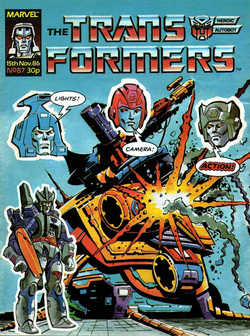 
The big problem with an unbeatable recurring foe is how you get them to shuffle off-stage at the end of the story in a way that lets you use them again without them having lost their potency. Look at the Borg, The Next Generation managed one really clever one off way of defeating them that didn't harm their credibility. After that though, their every return made them less and less impressive to the point Janeway was able to kill thousands of them just by teching the tech in their general direction. A species that started off as the Cybermen done right ended up being so poorly realised even the Mondosians from Silver Nemesis point and laugh at them.

Over the last two and a half months Galvatron has been the ultimate villain for the series, certainly more effective than Megatron has ever been. At this point he just can't hang about as an ongoing threat, nor be killed outright, as he has to get back to finish the movie, so the big question is how can he be sent back to the future in a convincing way that won't weaken him for his (almost inevitable at this point) return?

The solution is one a lot of people don’t particularly like and is often held up, even by those who enjoy the story, as somewhat flawed and a bit of a cop out. Considering I’ve said before that the climax is often where Furman’s writing falls down it would perhaps seem likely that I would be of a similar mind.

But, in a M. Night Shyamalan style twist, I quite like it, with Galvatron established as being so powerful there was no way of out-fighting him, instead something cleverer and a great deal more subtle is employed. 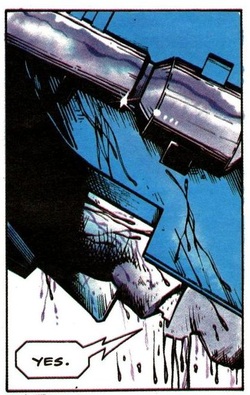 Ouch.
It turns out that; whilst Magnus has been leading Galvatron a merry dance; the future Autobots have knocked out Cyclonus and Scourge (again, where are the Constructicons?), set the entire machine to explode and painted the grabbed-from-the-Ark Skywarp to look like Starscream.

In a modern comic the later acknowledgement that some characters are just the other characters in different colours would be considered a meta-post modern comment on the nature of the toys. Here though it’s just a little tongue in cheek, and thankfully has more of a plot based rational than just in-jokery.

The three Autobots’ plot is something they have some real trouble kicking off though as Ultra Magnus just refuses to lay down and die like a good boy, throwing himself back into the explosion zone. Jeff Anderson’s art of a battered and oil-bleeding Magnus definitely declaring that it will take his death for him to stop trying is just wonderfully stark. It’s just a shame that part of the motivation for Magnus crawling on is him thinking of the Wreckers... with Springer and Sandstorm. He must be psychic.

Despite his gallant effort it’s little more than a token gesture though, and Galvatron quickly chucks him aside. But Kup still can’t press his big red button as, in a nice comedic touch, the other Autobots have decided to take one last try at Galvatron and come into the danger zone as well.

This is preceded by a conversation where Jetfire, continuing his poor show of leadership (it’s really hardly surprising that after this he never gets anything remotely important to do), decides he’s had enough of constantly trying to attack Galvatron by beating the Decepticon’s boots with his face, and wants to just give up and go home. It takes Smokescreen, of all Autobots, to point out this is a really stupid idea (and nicely also covers the potential plot hole of why they don’t just wait till Galvatron goes back to 2006 in order to wreck the machine, as none of the 1986 Autobots bar the brain dead Jazz know his actual plot and can’t be sure he won’t just go back to 1983 to try again if it doesn’t work this time) and galvanise the team.

The fact Jetfire hasn’t made much of a good showing as the boss in this story makes his endorsement of Magnus’ (new) leadership skills something of a backhanded compliment, but Galvatron’s incredulity at how suicidal everyone seems is another nice bit of comedy. 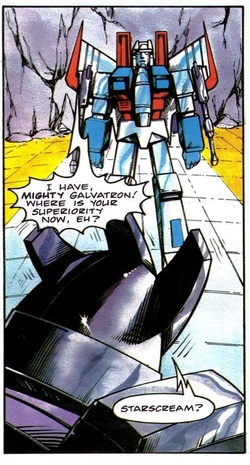 "Next up: Acid Storm".
Luckily for Jetfire, he doesn’t get the chance to be the large white jet punching bag for Galvatron for a third time. No, instead his perfect week is topped off as Kup decides to just press the button anyway and blow up the building he’s standing on. Sucks to be Jetfire.

It sucks to be Galvatron as well as all his hard work (and of course, the irony here is what he’s up too is trying to destroy a threat to all of Cybertron) being destroyed he’s buried in wreckage. Digging his way out he’s confronted by “Starscream”, who claims to have been responsible for the whole thing via a radio transmitter carrying the words of Hot Rod (well, he’d probably be best at the impression) that’s stuck behind Skywarp’s wing.

Now, this is all very A-Team so far, but now we’re up to the really smart bit. Galvatron snaps and, in a great bit of art, blows up “Starscream”... and instantly realises his mistake. As he knows Starscream lives until 2006 and is responsible for his own creation. This is where remembering Galvatron doesn’t want to change history comes into play, as he realises he must have travelled back into a parallel reality and nothing he does in this new dimension will affect his own future, so he just leaves (and we get the first appearance of the time trigger device that will play a major part stories).

So is it a cop out? I’d argue not. It’s behaviour that fits perfectly with both Galvatron’s established character and the internal logic of the story itself. Considering that broadcast SF hadn’t really moved beyond the idea that alternate timelines were just where the regular cast wore leather and eye patches this is a proper SF idea that’s surprisingly ahead of the curve in its execution. To put it in context, a good five minutes of the 2009 Star Trek film is spent with the characters standing around the bridge slowly explaining the same basic idea as if it’s all new exciting stuff (in a valiant but doomed attempt to assure fans that Star Trek: Enterprise isn’t the only one of the TV shows that still exists in the new history), 23 years earlier this silly little kids comic did it first and that I think is something to be proud of as a fan.

The problem comes from how this relates to subsequent stories: Galvatron’s intent and everyone’s attitude to how time travel works will be tweaked slightly and the notion of naturally occurring alternate realities that take care of any time paradox will never be referenced again and indeed works completely against the end of Time Wars.

Plus of course, for Galvatron’s assumption to work he has too properly kill Skywarp. Presumably- with his injuries established already as being more severe than the Decepticons Starscream could wake up- the intent here was Skywarp never actually recovered from what Omega Supreme did to him and the future Autobots regarded him as someone who could be blown up without affecting future history. However, Uncle Bob, who of course knew nothing of this, would have Skywarp come back just long enough to have Starscream kill him again making Galvatron’s attack just a flesh would that probably shouldn’t have seen him give up so easily.

However, it’s a bit mean to pick holes in a story based on ones that haven’t been written yet, and as a self contained entity the defeat of Galvatron works just fine for me. Of course, there are still enough loose ends for an epilogue next week (though the final question of what they should do with the real Starscream won’t be fully answered for over a year, and the final reveal will be somewhat surprising). The only real flaw with the issue is the slightly odd third person narration that runs over most of it, as well as being a bit intrusive it puts the reader at one step removed from the action. Otherwise, coupled with some nice down and dirty art from Anderson, this is a good solid issue.

Two weeks after Grimlock broke the news (which if nothing else seems to show which part of the comic was usually the last to be put to bed) Transformation is forced to sheepishly admit the new, final release date for the film. The attempt to drum up enthusiasm about how great it is to have an extra two weeks anticipation is somewhat unconvincing to say the least.

The ever prescient Grimlock gets to throw a future prediction that’s even more impressive than getting the release date of the film right. Simon Turpin from Leeds (who seems to have gotten hold of one of the American Universe issues... hey, I wonder if Futurtron did something similar last week?) asks a seemingly innocent question about Predaking that gets a very telling answer.

Grimlock- written for one of the last times by Furman before he departs his assistant editor duties to take over Thundercats- responds by not only relating the Predacons are on Cybertron (considering all the other combiners are going to be created by Earth the confidence with which Furman says this to my mind makes it clear he’d at least seen a synopsis for Gone But Not Forgotten by this point and a lot of the next UK arc-likely well into development if not full on drawing as this was being published- is indeed going to be a deliberate pre-empt of the way Budiansky will write out the leaders) but lays out the entire Swoop/Divebomb rivalry, a story which the weekly won’t pick up on for close to a year.

Even allowing for the late summer publication date of the Annual with the story that kicks the whole thing off (with the longer lead in time for Annual production Furman may even have had to start thinking about the 1987 book around now), that’s still some serious forward planning and shows the real thought that is going into the comic at this point.

The planning also goes into an altered-to-fit-the-story profile for Galvatron to compliment the Ultra Magnus one from a few weeks ago. This is, I think, our first glimpse of art from the Movie comic adaptation, though as it’s Galvatron in his Universe profile pose (which also inspires his look on the cover) it’s hard to be completely sure, but it does seem to be from the end of the first part. It has however, been recoloured so as to look actually good.

Spitfire still doesn’t seem to be in any hurry to get to the robot, though it was mildly surprising to find out that Spitfire is in fact [Roger More in Moonraker] a woman [/Roger Moore in Moonraker], being the teacher to Zac Morris and friends rather than the robot as I’d thought. And the scene where one of her students has a good perv on her is creepy in all sorts of ways.

Robo-Capers features an actual Transformer for the first time as Swoop craps on Megatron. A silly gag, but it still made me smile.

Next week, the epilogue sees all the remaining lose ends tied up. Also, even though I don’t think we’ve reached the exact point they were published I’ll be fudging things due to right after Target: 2006 being the best place to cover them: The winter special collecting the aforementioned three issue movie comic and, in a bit of an exclusive, something so obscure it doesn’t even seem to have a TFWiki page... The movie Poster Magazine! So it’s a trio of entries starting next Friday.

Someone’s going to go create a page for the poster mag between now and then aren’t they? 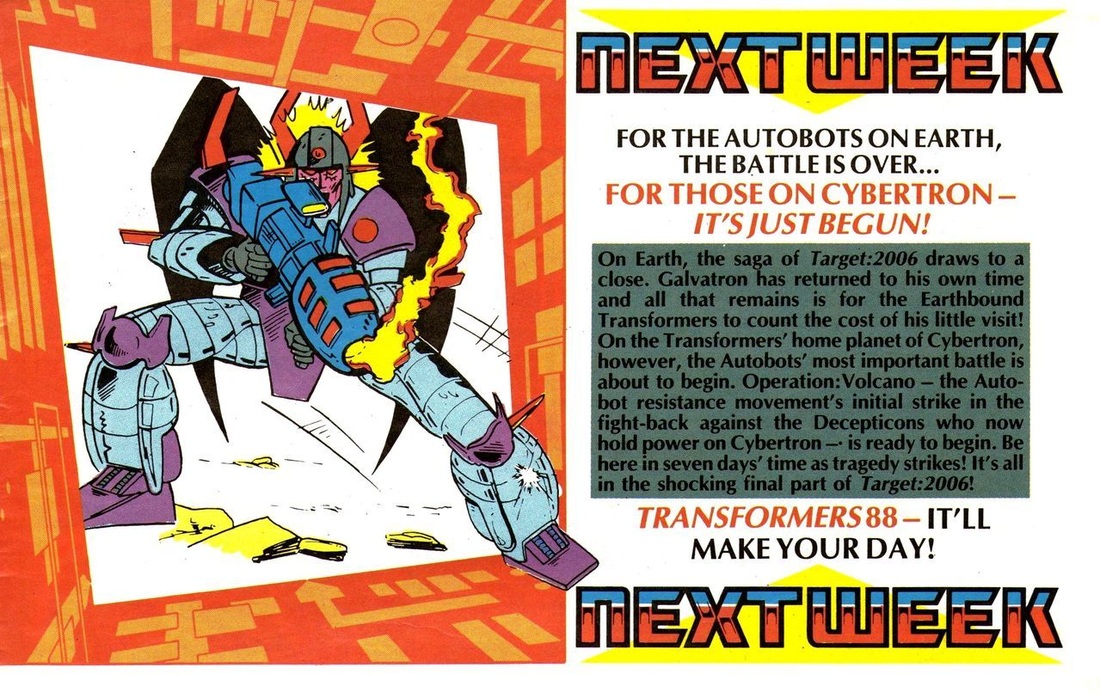