Get Outta My Lane Boy, You're Out of My League. 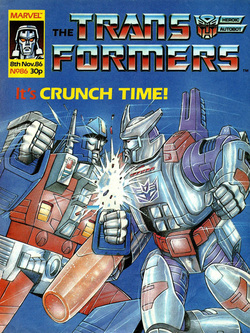 
"I need no weapons to destroy you, Ultra Magnus! I will tear you apart with my bare--"
"Feet?"


If Target: 2006 is the best remembered of all the British stories, then Part 8 is by far and away the best remembered instalment. Which considering some of the iconic imagery the adventure has already thrown up- from an exploding Optimus Prime through zombie Jazz- is a not unimpressive achievement.

Ironically it's not really representative of the whole story and the way it has lingered in the memory of readers has likely left them with a distorted impression of how much of an all out action epic Target: 2006 really is; whilst there have certainly been some impressive fights to date this story has been more about the slow build up of tension than fisty cuffs.

The thing with a slow build up is the pay off needs to be really good to justify the reader's patience, twenty years later Furman would fail to pull this off with his ...tion work for IDW which started off slow but interesting before getting slower and less interesting (and full of recycled ideas from Necrowar, remember that?), until the point IDW wound up thinking Shane McCarthy was a good alternative. 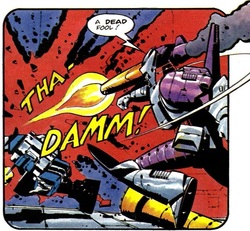 Deja vu.
Here though, Furman knows that having kept Magnus and Galvatron apart for two months their big (and at this stage potentially only, reader feedback might have planted the idea of a follow up in the minds of author and editor by this point, but in terms of writing Target: 2006 is still clearly intended as a one-off self contained story rather than a launching point) fight has to be completely satisfying, so virtually the entire issue is given over to it.

A big advantage in terms of making this work is having Geoff Senior back in the art seat. He knows how to perfectly stage all the action so every single panel just sings, and very cleverly makes both characters slightly bigger than they should be (note how tiny all the cars driving past Magnus are in relation to his truck mode), emphasising that they really are larger than life icons fighting it out like ancient Greek Gods.

In a really nice touch that shows how well writer and artist are working together at this point, a panel of Galvatron firing at Magnus is (presumably deliberately) the mirror image of the one between Optimus and Megatron I mentioned two weeks ago. It's a fantastic piece of visual storytelling that reaffirms these New Leaders are the successors to the old.

There's also clearly been a lot of thought put into how the fight works as well, it's not just a mindless punch up, well at least not for Magnus. Though he initially just goes in with the vague intent of forcing Galvatron back to the future, Kup (thanks to the first appearance of what will come to be called inter-Autobot radio) is able to give him a more definitive goal. Future boy and friends have a plan and just need Galvatron out of the way for an hour or two, leading to a merry chase across Oregon.

Senior at his best.
Galvatron on the other hand has no plan; Magnus is just the final straw after all the little annoyances and pointless setbacks he's suffered over the story. All he wanted to do was get in, build his weapon and get out, but now he's pissed and looking for someone to punch and punch hard. He also gets to be the first person to do a completely gratuitous quote from the film, and unlike the Brad Mick and Flint Dille's of this world Ultra Magnus isn't having any of it and throws in a subversion (quoted above) many future authors won't bother with.

Even the physical side of the fight is well handled, the fact Magnus is in vehicle mode for most of it makes the entire sequence feel fresh and new, and by being privy to his inner monologue more tension is added as we know the Autobot's quips are a front and Galvatron has actually hurt him quite badly.

The end of the fight is rightly iconic and appropriately apocalyptic when, having crashed into a construction site, Magnus uses his last strength to throw a petrol tanker at Galvatron, resulting in a massive explosion...

...And it's still not enough. Galvatron emerges victorious in what may be the best cliffhanger of the entire series. ReGeneration One would subsequently redo the entire fight in a way that attempts to subvert reader expectations (the pretence the book wasn't aimed exclusively at hardcore Marvel fans having been given up on by this point), but, as good an artist as Guido Guidi is, every alternate choice taken by the rehash just showed how the original got it exactly right. Especially the "Magnus wins!" ending, as a cliffhanger the baddy being defeated isn't all that exciting is it?

Over the week of New Year's into 2014 (and I hope you all had a good one) there was a great deal of controversy on the internet between Furman and fellow IDW writer Mairghread Scott that's a bit too complicated to go into here (though the salient points and my thoughts can be read in THIS thread at the Archive) but which didn't cast Furman in an especially good light in his responses. So it's good to come from that whole mess of a situation into a comic that shows him at his best and can remind us why he's such an important part of the franchise, and it has nothing to do with Jhiaxus using his Vagina Excavator on Arcee. The big question is, now Galvatron has been made so powerful, how can he be defeated in a way that doesn't seem a cop-out? 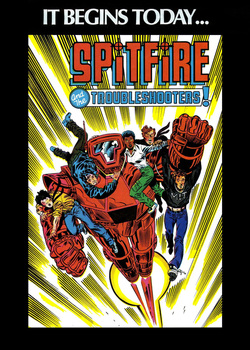 The Spitfire "Cover".
As you'd expect with such a big important well remembered issue there could be nothing else for the Transformation to talk about but... Marvel's New Universe. Yes, there's clearly been some arm twisting on behalf of Marvel US in order for their Big New Idea of 1986 to get a lot of attention. The fact these out of regular Marvel continuity stories aren't being greeted with huge enthusiasm by the British team can be seen by the fact the first two titles to make it to this shore are regulated to being back up strips in more popular comics (as well as what we're getting in Transformers, Star Brand is being inflicted on Spider-Man and Zoids). This will be a wise move as the entire New Universe idea is going to crash and burn.

Despite the promotion, and the fact it gets its own cover within the comic, Spitfire and the Troubleshooters doesn't get off to the best start, suffering from the piecemeal printing process. Though there's an interesting teaser of a scientist being electrocuted by a man in a robotic suit, what follows is a bunch of frat students playing a prank on their Dean. It's basically an episode of Saved by the Bell: The Collage Years. Maybe when the actual Spitfire turns up the series will find its grove?

The sidebar on Transformation manages to squeeze in past the pimping of comics no one likes in order to finish off the list of toys available in shops that was started last week. In this case including several, Combaticons and Protectobots, who we won't be seeing in the comic until well into 1987.

Grimlock receives a letter from Futuretron from Star System Alpha, a robot who claims he can predict the future. I'd normally mock this, but he correctly reveals the events of the two stories that will follow Target: 2006, spooky or what? It's enough to make you miss the fact that in another response, to Andrew Marshall from Greenhills, Grimlock has clearly been forced by higher ups that the cartoon is actually OK.

This week's Robo-Capers is another seasonal one, celebrating bonfire night, it's also the second to feature another proto-Giggly Sister. I wonder if all these women are based on someone Stringer knew?

Next week, we find out how you solve a problem like Galvatron with brains rather than brawn. In case anyone missed it, the results of the Quiz can be read HERE. Thanks to (and this may not be his real name) a comment from Aunty Slag I now know I’ve been misspelling Mike Kazybrid’s name every single time I’ve mentioned him over the last two years. As recompense, why not check out his official SITE (Kazybrid’s, not Slag’s. Do not Google Aunty Slag)?


ADDENDUM 2: BATTLE BENEATH THE ICE 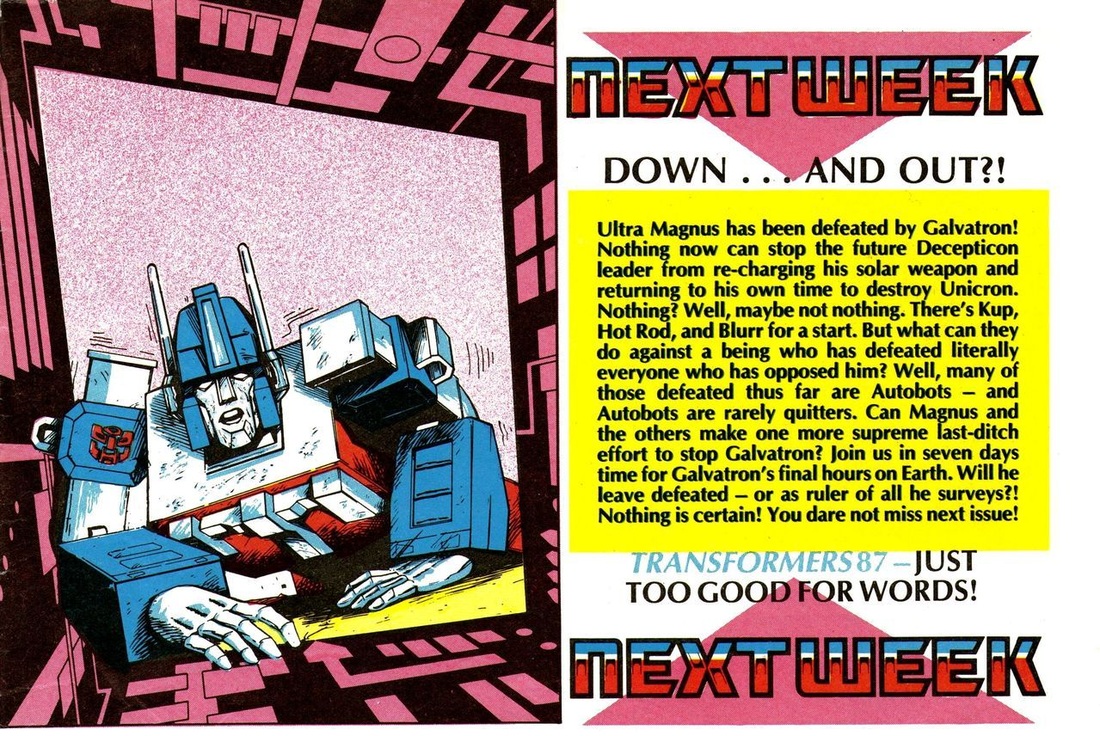